The air of the room chilled his shoulders. He stretched himself cautiously along under the sheets and lay down beside his wife. One by one, they were all becoming shades. Better pass boldly into that other world, in the full glory of some passion, than fade and wither dismally with age. He thought of how she who lay beside him had locked in her heart for so many years that image of her lover’s eyes when he had told her that he did not wish to live.

Generous tears filled Gabriel’s eyes. He had never felt like that himself towards any woman, but he knew that such a feeling must be love. The tears gathered more thickly in his eyes and in the partial darkness he imagined he saw the form of a young man standing under a dripping tree. Other forms were near. His soul had approached that region where dwell the vast hosts of the dead. He was conscious of, but could not apprehend, their wayward and flickering existence. His own identity was
fading out into a grey impalpable world: the solid world itself, which these dead had one time reared and lived in, was dissolving and dwindling.
– James Joyce, “The Dead” (1914)

When Damon Lindelof said that The Leftovers was fundamentally a love story, most of us probably assumed he was referring to the story of Nora and Kevin, which wraps the series, and he may well have been thinking of that himself when he made these comments. The resolution offered at the series’ end is not so much a resolution of its central mystery, as much as some information is given that pertains to that; it is the resolution of the drama between these two characters, who we have come to know and love.

Yet, The Leftovers can be viewed as a love story in an even broader sense than this, or perhaps I mean a more abstract one. Love is a theme that runs throughout this series. Whether it is a matter of Jill and Tommy Garvey re-establishing familial links; John Murphy moving past his anger to what seems like a good relationship with Laurie; Matt Jamison choosing his love for his sister over a metaphysically laden belief system that wrecked his marriage; Laurie Garvey breaking from the Guilty Remnant through her love for her daughter in a way that reopens her more general love for human beings; Nora Durst’s love for her lost family, which leads her to seek out a procedure that seems highly questionable as a matter of logic/science; or Kevin Garvey’s devotion to the idea of reuniting with Nora in spite of everything that has gone on between them (to the point of apparently traveling across the world every year to look for her). Even Kevin Sr.’s quest could perhaps be viewed as embodying a certain love for the world that he thinks it is his calling to save.

Of course, these loves are not all of the same kind, but that is largely beside the point. We can make distinctions until the cows come home (or don’t), but the fact is that it makes sense to hang these things together under this general term. Whether it is love for a romantic partner, a friend, a family member, a stranger, or whatever, the various characters in The Leftovers seem to turn to love, in one way or another, when it comes to their existential response to the Departure.

Every love story is a ghost story. We all live in the past, with our loves haunted by phantoms or relics of memory, whether this be of loves lost or those that are ongoing. The key elements are nothing material, but something else: fleeting moments of connection in a world that feels largely absurd.

Perhaps we don’t know who we are, or where we are going in this ocean of chaos, but we (hopefully) manage to connect with one another as fellow travelers—brothers, sisters, lovers, or even just as human beings in general—because, when it comes down to it, we’re in this together. The Departure exemplifies the absurdity of the human condition, the way in which it is beyond reason, or doesn’t make any sense. In response to this, a faith in God may be possible, but perhaps more fundamental is the faith in one another. Either way, you gotta have faith, or you’ll be thrown into the worst possibilities of human existence, paranoiac delusion, and so on and so forth.

God is love, or so the saying goes. Perhaps we should invert the phrase and say that love is God: that thing that we worship, and bow down to, but which is also meaningfully beyond our ability to comprehend. Why do we love? The fact that someone is family does not seem like a sufficient answer insofar as it is just a biological fact that we are pointing to, and it seems eminently possible that, in certain instances at least, one might not love one’s family, or a member of it. And perhaps you could think of some reasons if I asked you why you love a friend or a significant other, but would this really get to the thing? It seems that, in a way that is almost related to it by definition, love is beyond this kind of field.

How do I love you? Let me count the ways. Why do I love you?—does not the very question feel like an undermining of the love itself? This is why the commandment of Christianity, as presented in the New Testament, is a radical one: Love thy neighbor; love thy enemy. Why in God’s name would I do that?!

Thus, The Leftovers‘ theme of responding to the absurdity of the Departure through the lens of love is particularly apt. The ghost story is a love story.

And, again, I don’t mean to limit the field to questions of romantic love here by any means. For example, Mark Linn-Baker, who shows up in the series as himself, is distraught about the fact that the other stars of Perfect Strangers all departed. His friends—or, at least, his cohorts—are gone. Why not him?

And though the way in which The Leftovers plays with Perfect Strangers may seem to be largely tongue-in-cheek, was it not the case that that show itself was meaningfully about love? Larry takes Balki in not because of their familial bond so much as out of compassion for this other person, whom he has never met before. And arguably the series is about that love growing and solidifying to the point where Larry is willing to jump out of a hot-air balloon to try and save his cousin in the finale. 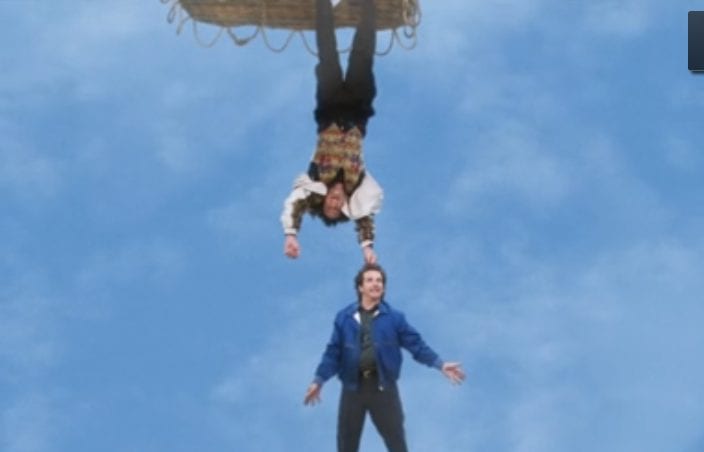 The scene is absurd in the comedic sense, as Balki grabs Larry by the hair and so on (don’t be ridiculous!) but The Leftovers works to bring that together with the more philosophical sense of the term: sometimes things don’t make sense, and we can either struggle to make sense of those things, or let the mystery be. That doesn’t mean ignoring it, though, as I think the various characters in this series show. The Departure actually serves to make the mystery unavoidable, which gets to the heart of the strength of this series.

You might be able to live your whole life without ever really thinking about death, or loss. Some might even think that would be a charmed existence. I’m not sure if it’s possible, but even if it is, the point would be that grappling with such questions is intrinsic to a meaningful life.

The Leftovers gives us the Departure as a sort of symbol for the inexplicability of death, and the absurdity of life. The central question is not how to explain it, but how to respond to it. Being unable to solve the mystery might lead one to nihilism, or wrath. It might lead one to embrace absurdity and deny the meaningfulness of human connection, to to take a leap into faith which risks doing the same. Or you might think you have it all figured out—perhaps you were granted some divine revelation—and undertake a quest to save the world.

Alternately, you may find that it is your very connection to others, and your desire to help them, that saves you. You might return to your family, and find some solace, or realize that your love for them is more important than some grand metaphysical vision. Or you might turn from anger to an openness to the mystery that allows the mystery to exist—to let it be.

None of that is simple if you have actually confronted the problem, which is an existential one. It is not so simple as to say that one should stop worrying and focus on the good things, loved ones, and so on. There is, rather, an existential anxiety that The Leftovers grapples with: how does one live in the face of such absurdity?

It is in light of this that Kevin and Nora deserve their status as the main characters of the series. The former lives in the space of ambiguity, where neither he nor we are ever fully sure of what is happening to him, or even of what he wants. The latter believes herself to be broken beyond repair, and insists on living in the space of the loss she endured, without the solace of some explanation. Neither knows how to live, yet neither has the “strength” to die.

Isn’t this all of us, in some way, if we are willing to recognize it? Floating, broken, and alone, we seek some connection to an Other who can offer some solace. You might have it with family, but there’s no guarantee, and those relationships can be fraught. You might think you have it with some significant other, but who knows when that might break down.

What we want is someone to love us absolutely, or without condition—even if we hire sex workers to shoot us or suffocate ourselves with dry-cleaning bags. We want someone to love us no matter what. And if we’re lucky, perhaps someone does, but it is always tenuous.

The fact is that most of us live our lives day-to-day without grappling with the kind of question that the Departure forces. We don’t think about death, or the apparent lack of some overarching justification for what happens. Or we hold fast in a belief in the latter, even though it is groundless, perhaps because we feel like we could not live otherwise.

We avoid the question; we avoid the mystery. But if we hazard to let ourselves confront it and take it seriously, what other answer is there than love?

“You want some tea?”

More From: The Leftovers