Any day that I get to write about Herschell Gordon Lewis, I consider a good day. I’m a big fan of the director that has more than earned the title “Godfather of Gore.” How does this work? How do I love the guy who said: “I see filmmaking as a business and pity anyone who regards it as an art form,” while simultaneously carrying on a love affair with the films of François Truffaut, the filmmaker who wrote the crowning jewel in defense of the auteur theory? I don’t understand it either, but somehow it works. Herschell Gordon Lewis did during his film career, the same thing he did through each of his careers—he saw an untapped opportunity and capitalized on it. Working in advertising before ever picking up a film camera, Herschell Gordon Lewis financed most of his films. Lewis has famously stated he didn’t make small budget films; he made mini-budget films. Using the same pool of novice actors, Lewis did whatever he could to save money while making his movies. Not only would Lewis direct, produce, and often write his films, he also composed the music and provided any narration needed for his films as well. By doing the voice advertising himself to avoid paying any more talent, Herschell Gordon Lewis brought new meaning to the phrase “shoestring budget.” While spending as little as $24,000 and four weeks shooting a picture, Herschell Gordon Lewis was creating a film genre that continues to thrive today.

Before becoming an avant-garde of the splatter film, Herschell Gordon Lewis received both a bachelor’s and a master’s degree in journalism before teaching mass communications at Mississippi State University. He then shifted to working as a studio director for a radio station in Wisconsin briefly, before he began work at a friend’s advertising agency by day and teaching graduate studies in advertising at night. Working in advertising is what opened the door for Lewis to begin filmmaking. Initially only directing and producing commercial advertisements to run on television, Lewis was eventually able to buy the small company he was working for along with a business associate to begin making films. Herschell Gordon Lewis found himself unable to make mainstream films that would be seen by broad audiences, which wasn’t his goal anyway; instead, he and his business partner made some of the earliest exploitation films that were so heavily censored by the Motion Picture Production Code that they were hardly seen. Both of the men then set out with the sole intention of making films only to turn a profit. They would make films as cheaply as they could, just hoping that enough people would see them to be able to turn a profit. To do this, they tapped genres that weren’t widely accessible and set up camp to produce something one-of-a-kind that would pique curiosity and build an audience.

During this period, they made what they billed as “the first (and to date the only) nudist musical.” When they realized how many more people could see their films if they moved away from the “skin flicks” they had begun to specialize in, Herschell Gordon Lewis birthed the idea to make films so gory and shocking that it would be like nothing audiences had ever seen before. By changing focus, Lewis’ films were able to play at drive-in venues, further bringing in more of a profit from a market closed-off to their previous genre films. Blood Feast, released in 1963, is considered by most critics as the first gore film. The shocking saturation of the full-color blood effects throughout the film started a movement with other directors eager to fill the screens of their films with such appalling vibrancy. There was no envelope Lewis wouldn’t push in his films. In The Gruesome Twosome, for instance, Lewis famously shows an electric knife as the tool for one of his actors to scalp his victim. By taking risks and using the money he made through his various other careers to finance his films, Herschell Gordon Lewis became a titan in the film industry.

Blood Feast shows what happens when a series of gruesome murders targeting young girls unfolds in a small, unassuming town in Florida. The townspeople are as alarmed as the police, as the killer never leaves a whole body behind at his crime scenes. At each murder during the police investigate, they arrive to find a murdered woman missing a body part. Each of the killed women is missing a different body part, leading police to the conclusion that the murderer is harvesting the various organs and body parts, though no explanation has materialized from the investigation. When police detective Pete Thornton (William Kerwin) makes connections from the crime scenes to the Egyptian lectures he’s been attending, he wonders if the killer is trying to resurrect an Egyptian goddess and killing these women to aid in his quest. When Pete’s girlfriend Suzette (Connie Mason) is having a party thrown in her honor by her mother, the Egyptian theme of the feast causes Pete to think that the murderer may be catering the affair. Local caterer Fuad Ramses (Mal Arnold), who specializes in Egyptian cuisine, may have ideas other than dining in store for Suzette when he arrives to cater her special night. 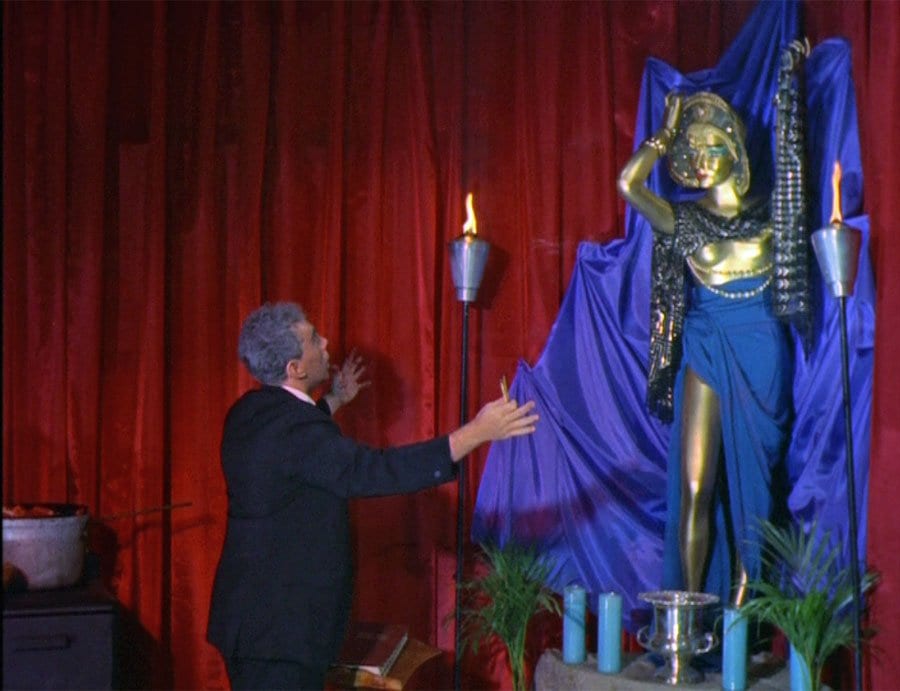 The pioneer Herschell Gordon Lewis had the audacity to give us a film in which not even two minutes elapses before someone is getting an eyeball hacked out of their face—what bold filmmaking! Blood Feast is clumsy, the sound design is off and the lighting is amateur, but through all its faults, you almost can’t help but love it. Blood Feast was the first of its kind, dedicating itself to shocking the audience with enough fake blood to fill a suburban kitchen. Herschell Gordon Lewis boasts during the introduction of the film that Blood Feast is probably best remembered for the “tongue scene,” and he’s probably not wrong. I’m sure, if you haven’t seen it yet, you have enough information to properly assume what exactly happens during the “tongue scene” to avoid the gory detail. While these scenes are heinous in their depiction, they are so clearly fake that it gives each of his films a self-aware quality that you don’t often get from movies. It’s a little cinematic miracle that each Herschell Gordon Lewis film even exists, clearly coming about at the exact right moment wherein it could be received for what it is.

Herschell Gordon Lewis is single-handedly responsible for the splatter film. He didn’t concern himself with making the most elaborate sets or sticking to coherent sound design or writing the highest quality script, because he was preoccupied with his creation of a film genre. Each of his previous careers lent some insight and understanding to the film career of Herschell Gordon Lewis. He brought with him such a breadth of knowledge about advertising, audience expectations, and how to earn the most money with the least investment that he was incredibly well-equipped for the brand of filmmaking he was embarking upon. Maintaining a laser focus on the blood-themed films he made throughout his career, Herschell Gordon Lewis became a Dr. Frankenstein-like figure, creating a monster of cinema. Of course, Herschell Gordon Lewis wasn’t the first filmmaker to feature blood in his films, but he was the first to make that blood, “in all of its red glory,” an actual character in his films. The influence of Herschell Gordon Lewis can be seen today in the films of John Waters, Quentin Tarantino, and Robert Rodriguez (all of whom list the Godfather of Gore as an inspiration). Herschell Gordon Lewis is a presence missed in cinema and one I find consistently enjoyable. Lewis knew his films weren’t the best, but at the end that didn’t matter; for in his own words, “He seen somethin’ different. And he did it.” He did, and no-one did that somethin’ quite like he did.