“I’d say you’re confusing suicide with self-destruction. Almost none of us commit suicide and almost all of us self-destruct. In some way, in some part of our lives. We drink, or we smoke. We destabilize the good job. Or the happy marriage. These aren’t decisions, they’re…They’re impulses.” – Annihilation (Directed and Screenplay by Alex Garland, 2018)

The climax of Danny Boyle’s Sunshine (2007), whose screenplay was written by Alex Garland, represents a sharp turn compared to what came before in the film. Until that point, it had been a drama about the struggle to stay alive in space, and beyond that, about how to stay alive despite nature’s evolution—if the Sun can be said to be part of nature. In the climax, it is revealed that Mark Strong’s Pinbacker had snuck aboard the Icarus II (the ship filled with scientists sent to restart the Sun), and was intent on murdering the entire crew, after having been driven mad by so much time spent in space, living alone on board the original Icarus, in full view of the Sun.

It’s a sharp swerve into a slasher film relatively late in the runtime, and I can understand it being considered incongruous. I thought it was too, at first. I think it only came together for me as I watched Annihilation earlier this year. There’s a moment where Tessa Thompson’s Josie is sat in the grass, contemplating what Area X, the mysterious phenomenon that has overtaken the area surrounding a lighthouse, has done to each of the characters; “Ventress wants to face it. You want to fight it. But I don’t think I want either of those things”, she says. Very soon after that, it’s implied that she accepts the changes being wrought in her body by Area X and transforms into a beautiful tree. There are worse things, I suppose.

What I mean is—both events, the genre shift in the climax of Sunshine, and Josie’s transformation in Annihilation, are both the result of sheer chance. There is no reason why either should happen, other than the fact that both worlds show an indifference towards the desires of the characters of both films. Sunshine and Annihilation are films that are concerned with sudden intrusions, with potent reminders that we aren’t as in control of our lives and ourselves as we like to pretend we are. This is shown through their relationship with nature. The natural world doesn’t care how hard you work, or what your hopes and dreams are. It is indifferent to your suffering, and not beholden to any form of society. It’s the intrusion of chaos into our lives—we can’t understand why we’re confronted with a disaster, we just have to work around it, we have to adapt.

Alex Garland is concerned with the way we react when confronted with this indifference, and the way it forces us to adapt. The sun rises at the end of Sunshine over the planet, humanity and the natural world will live on, but at the expense of the crew of the Icarus II. Adaptation for them meant death, but life for others. The chaos brought by Pinbacker acted as a proverbial butterfly, forcing them off-course. The chaotic factor of chance is also brought into play at the very start of Ex Machina. Of course, we later find out that Oscar Isaac’s Nathan had rigged the competition to ensure that Caleb (Domhnall Gleeson) would be the one to “Evaluate” Nathan’s new artificial intelligence, Ava (Alicia Vikander).

For most of the film (Garland’s directorial debut), the two men manipulate each other, trying to out-game the other, with Ava and the question of her sentience dangling as the prize in between them. Of course, the twist comes as Ava betrays both men, setting into motion the events that would lead to Nathan’s death, ultimately at the hands of Kyoko (Sonoya Mizuno), another android, a fetishised robot (an Asian woman, who never speaks. The racial subtext there is more text, than anything else). She also leaves Caleb to die in the underground mansion. She locks him in and walks away, leaving his fate all but certain.

A cruel act, and one that could be taken as proof that Ava doesn’t possess sentience, which would certainly have some rather unpleasant implications for Garland’s view of women. However, when put into the context of Annihilation (an almost entirely female cast, with only Oscar Isaac’s Kane being a male character of any real significance) and its narrative of the complicated psychologies and ugly desires of women, their paradoxical desire to find and destroy themselves, it becomes clear that Garland was using Ava to make an altogether different point.

It’s not that Ava is indifferent to everything, and therefore doesn’t experience sentience, she’s just indifferent to Caleb and Nathan. There’s a difference. After all, why should she empathise with them? They certainly don’t return the favour. Nathan is outright abusive—beating her and locking her in a glorified cell until he’s sure that she’s worthy of being treated like a human being (an unsubtle comment on the tendency of men to require proof that women deserve to be treated as people), and Caleb is hardly any better, convinced that the only possible way Ava could prove her sentience is for her to fall for him.

As she leaves the basement, Ava exchanges her girlish floral dresses for a more structured white dress. Her hair curls around her shoulders and she wears heels. Significantly, she looks like a woman rather than a girl. I love Vikander’s performance in this scene—she tilts her head upwards, feeling the sunshine for the first time in her life, and walks through woods and meadows; free to experience the natural world. She’s indifferent towards the men who imprisoned her, but she’s certainly sentient. The ending of the film emphasises her enjoyment of nature—sensual as in ‘from the senses’. Ex Machina disguises itself as a film about the question of artificial intelligence, and its implications for human life, but really it’s a lot less high-concept than that. Ultimately, it’s about two men indifferent to the suffering of women, and the consequences of that.

Is it justice? I don’t know. But I’m not going to lie, it felt good to watch them beg for mercy.

It’s that ugliness that concerns Garland in Annihilation. A piece that I don’t think I’m brave enough to write would be about the ways I’ve knowingly and subconsciously sought self-destruction, sometimes as a result of mental illness, sometimes because that’s just what people do. It’s not a part of myself that I enjoy confronting, or acknowledging. Annihilation is about those self-destructive tendencies. Natalie Portman’s Lena distances herself from her emotions, taking refuge in her rationality instead of confronting the messiness of being a feeling person. I can understand that. But I also understand Gina Rodriguez’s Anya as she stares at her arm, watching something slither and shift underneath her skin. How do you put a word on it when your body doesn’t feel like your own? The changes wrought on the characters in this film force them to confront the specific ways that self-destruction ruins their lives. Area X, the Shimmer, whatever you want to call it, doesn’t care that these women can’t handle it, it doesn’t care when this confrontation breaks them. The unrelenting nature of this confrontation is what breaks the team, before transforming them into something new. Lena and the other members of the team spend much of the film baffled at the fact that Area X doesn’t follow the laws of nature; it twists them just enough to disconcert them. Different species of flower are able to grow on the same branch, and the alligator’s teeth aren’t quite right. Josie suggests later on that it’s like refracted light—one ray of light that is blown apart, and then put back together in a different order on the other side of a prism, and this is what happens to each character in turn. They are broken apart and put back together again in a twisted form of evolution, the power of Area X being that it rearranges cells, making you into something new.

Jennifer Jason Leigh’s Dr. Ventress bursts into light, with an unknowable energy coming forth from inside of her like a butterfly from a chrysalis. From that light, something is born—alien in the truest sense. Lena is confronted by it, engaging in a literal dance with the creature as they mirror each other’s movements; battling her subconscious in an entirely new way. It’s not that this creature is malevolent, much like Lena’s own intentions are curiosity, not malice, but nevertheless, only one can emerge from the battle and, judging by the ambiguity of the ending, Garland is himself indifferent to who emerges ‘victorious’. The final moments of Annihilation leave the viewer with a question—not who emerged from the lighthouse, but rather does that very question even matter? The person who entered is decidedly not the person who left, whether that is meant literally, or just as a reflection of the changes that are necessarily wrought by such an experience. I don’t think it matters, Lena has been refracted beyond the point of no return, so it stands to reason that Garland, and the viewer, regard her in those final moments with curiosity, but ultimately acknowledging the hollowness of any question of identity, as far as she’s concerned.

This is what this emphasis on chance, and on indifference, leads to—a questioning of the purpose of identity. Why does it matter? If someone can perfectly simulate emotional effect, does that differ from sentience in any meaningful way? If a person can blow up their own life to the point of it being unrecognisable, who’s to say that she who emerges from that wreckage is the same person as before? Garland’s films display a mistrust of identity as a ‘fixed’ phenomenon, or even one that can stand the challenges thrown at it by the universe. He remains far more interested in adaptation, evolution, and what that means for those left behind by the fact of change. 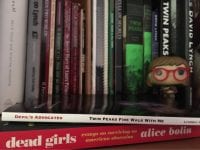