Sometimes a film is just a film. It may be hard to define or an absolute oddity, but the spectacle’s entire substance is unadulterated sugar for the senses. The ‘60s were littered with celebrations of sight and sound that indulged in this form of pure escapism. They were genuine guilty pleasures that encompassed a good time wrapped in technicolor packaging. Nothing encapsulates that delightfully deviant feeling like the cult classic Danger: Diabolik. Led by one of Italy’s most well-known directors, the film captures mind-altering style in one easy to digest cinematic pill. 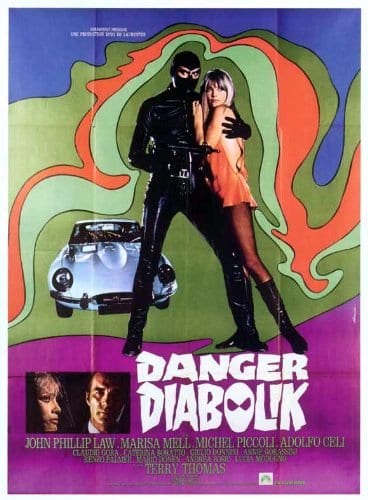 Art In A Time Of Unrest

Art provides a swerving roadmap to the lies, rules, and riddles that surround any time period. Among the ‘60s most prolific art forms, comic books became both pop culture icons and social guides. They represented the dreams and nightmares of entire societies with alluringly simple storylines. Every panel was packed with flourishes of style that made the volumes an easy choice for visually stimulating TV and film adaptations. These modern-day equivalents of fairy tales took chances while expanding ideas based on the all too pervasive socially conscious topics. Italy was not immune to social revolution and 1968 provided the right fuel for a comic book character that could defy authority. Italian audiences were treated to the tales of Diabolik as a harbinger of their changing moralities. This initially unscrupulous thief was never a hero, nor did his creators want him to be. Instead, he represented a darker narrative that bathed in a time of indulgences. It was the creation of a new sub-genre known as fumetti neri and the perfect recipe for cult immortality.

In Praise Of Bava

The allure of Mario Bava’s filmography is hard to explain, yet so understandable to the gleefully initiated. His films dare viewers to go further as they look into realms previously undreamt of by the imagination. Every inch of the screen calls viewers closer to experience the hypnotic journeys emanating from his calculated directing style. Bava’s shots take on a sense of artwork that could easily be captured and displayed in any gallery. In that context, the audiences of 1968 were experiencing just another one of his graphic exhibits that challenged pulse rates. What they got connected the worlds of giallo and horror to the commonly overlooked spy genres that were potent fodder for satire. Bava, himself guilty of a comedic foray with Dr. Goldfoot and the Girl Bombs, gave the comic book realm a smooth polish. Like all his works, Danger: Diabolik is a bricolage full of undeniable stimulation. He did it all with less time, less money, and scripts that would have been an albatross for any other director. It serves not only to be a testament to the director but the art he called his own. 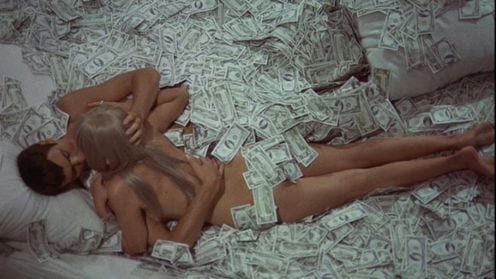 The Aesthetics Of Pleasure

Diabolik’s world is filled with overindulgence of the body and mind. The decadence on-screen is far more than a mistake; instead, it serves as a bold reminder that the following decades didn’t hold the sole distinction of luxury profusion. There was an escapism in pursuing the fantasy that straddled the line between troublesome elements and comfortable diversions. Nothing was off limits and everything could be devoured by the characters who play among its eccentric universe. Audiences of the period were also grappling with indulgences that mirrored cinematic excesses. Whether it was casual relationships or the latest sports car, people were force-fed a steady diet of everything they wanted and everything they couldn’t have. Those hardy souls that did side with fetishes took their indulgences to the limit with sometimes unpredictable results. 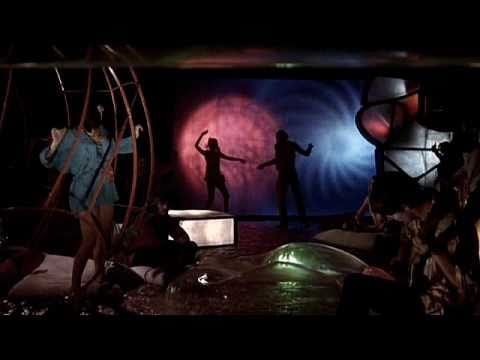 Everything swirls and turns in this chaotic universe. The title sequence spins with vivid jeweled tones that brilliantly entrance viewers’ gazes. Valmont’s club uses bright circular projections to belay dark deeds and wild abandonment. Diabolik and Eva’s time spent in a large swirling bed that rotates as they play out their own sexual whims. More than just a fascinating aesthetic, the circle is a symbol for not only a comic book fantasy, but the real world that consumes it. In one aspect, the shape defines the revolving elements that always seem to come back. This underlying geometric principle is as much relevant to the life of Diabolik as it is the film’s audiences. He thrives on its dangers and delights without a care to the damage around him. His very intuitions reveal an allure that is hard to run from as it comes ever closer to the viewer’s identities. Societies in the ‘60s took part in the same unflattering rituals that Diabolik brazenly revels in. While some were actively aware of the problems crawling to the surface of consciousness, many equally relished the safe confines of their own unflattering existence. If it didn’t hurt them or if the situation felt right, it must be free from the usual trappings.

The circle also has the ability to put everyone in the same position. Whether it’s financially, physically or socially, this shape balances those on the edge with an equal distance to whatever prize looms in the center. The nature of perfect proportions stands at a stark contrast to the lives of both the film’s inhabitants and 1968’s own delicate social structures. In reality, those distances are never truly balanced. No template could change the fact that some were living in poverty or dealing with corruption while others had lives of privilege and wealth. For those who viewed Diabolik as a hero, even through his most despicable acts, the presence of someone who could restore that perfect circle to its correct alignment represented the ultimate dream in an imperfect world.

The Sounds Of A Master

The ‘60s were synonymous with a rebellion in music. Every aspect of the decade found a way to create melodic connections with its most well-known events, especially the protest movements that thrived on change. On a more personal level, the music was nurturing memories that would last a lifetime for those who bravely chose recollections. Danger: Diabolik’s soundtrack may not be remembered as fondly or with as much passion as the decade’s classic contributions, but it was the perfect companion for the mod culture. Renowned composer Ennio Morricone brought the comic book landscape to life with a set of songs that enforced perpetual coolness on a smaller scale. These audio contributions weave the shots together and yet stay in the background as the film’s focus waft through various storylines. While it lingers in the constraints of the scripted journey, these tracks could easily fit into the audience’s life outside of the theater. They are dedicated pieces that capture an aesthetic that was just as comfortable at a trendy dinner party as they were following Diabolik’s escapades. Alone, each work offers a time capsule that becomes both a vibrant statement of the time’s own obsession with style. When pieced together, the compositions create an identity that smooths out the edges. It’s as close to a living embodiment of notes as one can get without peering into an unexpected dimension.

The decade and even the year may have been full of significant cinematic achievements, but there’s no shame in loving the works that purely entertain. Danger: Diabolik is complete saccharin laced with poison pellets that burn the senses. It accomplished the ultimate feat, in providing audiences with an escape from an ever worrying landscape that would only grow darker and more worrisome. Sometimes that is the greatest feat and ultimate kindness a director can give—a way out.