“We don’t want to really be fully sane, and that seems to be our problem, usually. We would like to have a little corner of neurosis, somewhere. Even in our pockets, just a little puff here and there. So if we find too much sanity, we say, ‘Boy, it was heavy.’”

This episode focuses on how our experience of reality is shaped by how we make meaning out of suffering. In “Bye, Mom” we see how each character’s underlying philosophical perspective—either conscious, unconscious, or somewhere in between—influences the way they navigate their lives and relationships.

“Bye, Mom” begins with a discussion between two workers discussing French philosopher Jean-Paul Sartre as they harvest cucumbers. One man, Jorge (Darius De La Cruz), believes Sartre was “fundamentally flawed” because he did not believe in God. The other man, Eduardo (Daniel Moncada), asks Jorge if he believes in God, to which Jorge replies, “Cucumbers are my God. Why be held accountable to a higher reality? We are the cucumbers. After we die, we become the dirt. If the cucumbers are God, then we are gods. We are gods, Eduardo.”  Jorge ends his brief monologue by saying, “Existence is discovery.”

Then, we see two women placing cucumbers in jars. One woman says that every time she sees cucumbers, she feels sadness, because she can only think of the “dead Pickles kid,” aka Jeff’s son, Phil. The woman next to her becomes angry, because now she can also only feel sadness while looking at the cucumbers. Then, we see a hooded man buy a jar of pickles from a grocery store. He hurls it at someone’s front door, yelling “Murderer!” A little girl emerges with a middle-finger raised, and as the hooded man runs off, she pulls out a nearby broom, perhaps indicating that this is a common occurrence.

In this very brief exposition, we are exposed to different ways in which people think about reality, and how tragedy can alter a person’s worldview. One person concluded that, at the end of the day, humans are divine. One person only saw repetitive sadness, and could not seem to make meaning out of her pain. Another person became enraged, and lashed out violently, because it was seemingly the only way he could communicate his pain and frustration. And finally, we saw an innocent child prematurely exposed to the existential rage of the adult world. She is left to pick up the pieces that her disabled father could not.

In this episode, Scott (Bernard White) tries to speak to Maddy’s (Juliet Morris) piano teacher, Rex (Andrew Tinpo), who was also his lover, but his door is closed. Since Deirdre (Catherine Keener) confronted Rex, he has avoided Scott entirely. Scott waits, but becomes frustrated and leaves. When Scott returns home, he finds Maddy and Deirdre at the kitchen table, and tells them he is sick. Scott says, “I’m not going to work today. I have the flu; it really sucks.” Deirdre asks, “Where does it hurt?” Scott responds, “All over my body, I need to go to bed. I need fluids. I can’t go to work today, or tomorrow; maybe ever. I don’t want to be a corporate travel agent. Why am I a corporate travel agent?” Maddy asks, “Are you crying?” To which Scott responds, again: “It’s the flu,” and walks away.

Scott is existentially shattered by having his heart broken. He cannot fully articulate the pain, so instead he somaticizes it, locating the suffering in his body—“It’s the flu,” he says, as do many others who seek medical treatment for psychological ailments. Scott’s emotional pain causes him to question his entire existence: the disillusionment is so powerful, it destabilizes his worldview.

Later, Scott tries to come out to Deidre as they lie in bed together. Deirdre doesn’t allow this, even though she has known about Scott’s sexuality and his affair with Rex. Deirdre refuses to have a conversation with Scott because she assumes his coming out would dissolve their marriage, resulting in an unhappy life for Maddy (and by proxy, for herself). Deirdre avoids reality by physically leaving the room, but her own feelings of anxiety, pain, and heartbreak will continue, regardless of her avoidance. It is impossible to walk away from the conflict because she carries it inside of her, so whatever she does, wherever she goes, the confrontation is only a matter of time.

In this episode, Jeff’s storyline revolves around his confusion that he had a one-night stand with Vivian (Ginger Gonzaga), who has yet to contact him since their encounter. Jeff initially thinks his text didn’t go through, or that his phone was broken. Interestingly, a man at a cellphone store almost suggests to Jeff that perhaps the woman did not want to see him again, but Will (Cole Allen) cuts him off, and tells Jeff that it is likely that her phone is broken, not his. Here, for the first time, Will steps in to protect Jeff’s optimistic worldview, instead of attacking it. In a sense, everyone in Jeff’s life has been complicit in enabling his childish optimism, and I would imagine the success of Mr. Pickles Puppet Time has had the same effect.

Deirdre also says that she has always tried to protect Jeff, but that she cannot protect him anymore, and as a result of her painful interaction with Scott, Deirdre gives in to Seb’s demands and constructs an oversized Mr. Pickles’ puppet head.

Jeff’s behavior in this scene is quite chilling. He puts on the puppet head, and asks if Deirdre has ever seen RoboCop. Jeff then says, “It’s about a police officer who dies in the line of duty. His buddies rebuild him like a robot. So they can control him. But it just gets…way more violent.” In addition to Jeff’s cryptic words, the music and emotional tone of this scene are quite ominous. If Jeff loses Mr. Pickles Puppet Time, will he lash out violently? The evidence of Jeff’s potential violence is accumulating.

In another scene, while Jeff is looking for Will, he encounters one of Will’s friends smoking pot out of a pineapple. The kid asks, “Hey is it true you killed a bunch of Lebanese people when you were a sniper for the CIA?” Jeff says,“You shouldn’t believe every rumor you read.” Jeff takes a step forward, and then stops. His facial expression changes. Jeff approaches the kid and says:

“Truth is, I wouldn’t know the first thing about lining up an innocent man’s peach pit from a thousand yards out, pink misting him through his kitchen window. I’ve never been to Lebanon or Iran. Never known the thrill of sipping the Shah’s contraband tequila from the cold navel of my hundredth kill. Nor could I appreciate the years of tenacity and training it would take to draw an imaginary line between my heartbeat and my trigger finger. Never done those things. I could never take a man’s life. But I’ve heard it’s as easy as popping a pimple.”

Jeff smashes the pineapple bong against a tree. The kid points and says, “I think Will is over there, man.” Jeff reverts to his childlike persona and says, “Thanks for your help. You’re a good helper!” After this dramatic interaction, I can only imagine that Jeff does indeed have a dark and violent history, which has been disavowed and split-off from his current Mr. Pickles persona. However, up to this point in the series, Jeff has not been violent toward any person—so far, his violence has been limited to smashing physical objects. In this episode, Jill (Judy Greer) asks him what happened to his shattered lamp. Jeff says, “A lamp got broken.” Jeff still cannot take responsibility for his own violence and destructive acting out, so he can’t even say, “I broke the lamp”—he has to say, “A lamp got broken,” like a young child who does not want to acknowledge that he has broken the rules.

In the climax of this episode, Jill comes to Jeff’s apartment and they have an emotional conversation, which becomes a confrontation. She questions him about the fact that he has been paying for the expenses and bills for the man whose truck struck their car and killed their son. Their personal sparring turns philosophical when Jeff says, “The world is a circle with endless possibilities.” Jill responds and says, “It’s not a circle. It’s a hole.” As she turns to leave, she tells Jeff the reason he has not heard from Vivian is because she does not want to see him again, that teaching Will magic tricks won’t stop him from smoking pot, and that the man who struck their car and killed Phil is lying to him and does not have a back injury. Before walking out, Jill says, “I’m sorry, but this is where we live. Please. Join us.” The room grows dark and shadows pour over Jeff’s face as his world starts to crumble. Then, suddenly, Jeff receives a text message from Vivian saying that her phone had been broken, and that she would like to see him again. Although Jeff’s optimistic attitude was congruent with reality, this can only be temporary, as Vivian only has six weeks to live.

At the end of this episode, we see Jill sleepwalking and whistling a song from Mr. Pickles Puppet Time. She walks into Will’s room and climbs up to the top bunk—which used to be Phil’s bed—lies down, cradles a pillow, and rests. The jaded cynicism that reigns supreme during the day becomes flipped on its head in the night, and as her conscious mind rests, her unconscious mind and dreaming body are thrown into reality. Jill’s yearning for her deceased child manifests itself and she finally finds respite, albeit outside of her awareness.The extremity of Jill’s unconscious behavior is probably due to the severe denial of hope or the possibility of meaning. Will, however, is awakened by her presence, and is understandably puzzled. Things are dramatically out of balance for Jill, and for her entire family.

As I considered the growing tension within the Piccirillo family, I was reminded of the brief but jarring interchange between Deirdre and Seb. Referring to Jeff’s mental stability, Deirdre asks Seb, “How much longer do you think we have?” Seb immediately says, “As a species?” There was something shocking about this comment, and even though it happens quickly, it reasserts that this episode revolves around the meaning of existence, and that inherent in our human way of being is dying, both individually and as a collective. It also clues us in to Seb’s mind—not only is he concerned about the continuation of Mr. Pickles, but perhaps the entire human species. On a smaller scale, I also could have imagined Seb responding to Deirdre’s question by saying, “As a family?” I wonder if there will be enough of a shift in their family system to revitalize it and bring its members to a more mature level of being, or whether the Piccirillo family and Jeff’s gas-filled house will both explode, resulting in further catastrophe and tragedy. Whatever happens, I can assure you that I will be watching. 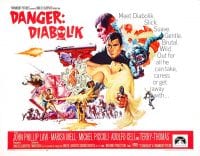