“Sometimes I feel so low-down and disgusted
Can’t help but wonder what’s happenin’ to my companions
Are they lost or are they found
Have they counted the cost it’ll take to bring down
All their earthly principles they’re gonna have to abandon?
There’s a slow, slow train comin’ up around the bend

Big-time negotiators, false healers and woman haters
Masters of the bluff and masters of the proposition
But the enemy I see
Wears a cloak of decency
All nonbelievers and men stealers talkin’ in the name of religion
And there’s a slow, slow train comin’ up around the bend.”

High Plains Drifter begins like many of Clint Eastwood’s Westerns: a lone rider comes into town which has a problem with outlaws, and he agrees to help deal with them. No name is offered and we are led to believe that this film will carry on in the tradition of Clint’s other Westerns…except it doesn’t. High Plains Drifter is the most unusual, surreal and subversive Western I have ever seen. It is profoundly unsettling, but compelling as all hell, and one of the best movies that Clint Eastwood has ever directed and starred in. While it was dismissed by some at the time as a pale imitation of Sergio Leone’s work, time has shown High Plains Drifter to be one of the greatest Westerns of the 20th century. So, what is it about the movie that makes it so unusual? Well, to start with, the character Clint plays is not a hero. His actions early into the picture—where he rapes a woman in broad daylight—are enough to give the viewer serious pause. What is it that we’re watching? As the movie progresses, however, the shocking nature of this scene is given context and motivation, that while not excusing such actions, show a town complicit in an unforgivable crime being punished for their sins in a story seemingly straight out of the Old Testament.

It is to be expected that for some people, this kind of fire and brimstone justice is too vicious and sadistic. The mistake that is likely to be made by this viewer, however, is the belief that Clint’s character is supposed to be the hero. This is where the movie subverts the basic starting point for the vast majority of Westerns: that we need to root for our hero as he or she defeats evil. High Plains Drifter expresses a belief that punishment of evil all too often results in the person themselves becoming morally adrift, and twisted into something all too close to the people they are trying to set right. This is an eye for an eye. High Plains Drifter—with its surreal and disturbing tone and an ending that confirms what the viewer long suspects—reminds me quite a lot of some Japanese horror films, particularly The Grudge and Ring, for the way it depicts an otherworldly presence that is intent on setting the scales right after being destroyed by a harsh and uncaring world. This is not something you can reason with, as the town’s people in High Plains Drifter discover. Being told that he can have anything he wants, he proceeds to destroy the town from the inside out. He is not here to help them, he is here to punish them. He transforms the town into a Hell on Earth. 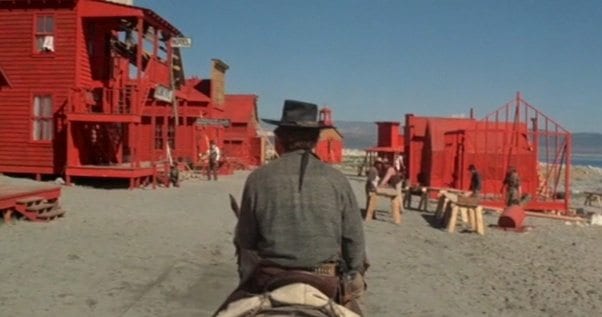 It is interesting to consider the moral implications of High Plains Drifter, especially in this era of #MeToo. The initial and obvious reaction to the rape scene is, of course, well-justified horror, especially given Clint Eastwood’s film reputation as being the guy who stands up for the downtrodden and abused. However, when you examine with a closer eye, you understand that really the retribution taken against the town for allowing the death of the town sheriff is philosophically in line with the #MeToo movement. Here, Clint’s character punishes the entire town for standing by and doing nothing to prevent an unforgivable crime. They are complicit in it, even if they didn’t whip the man themselves, they stood by and let it happen. This is justice manifested as a force of nature. It is not about what is fair or measured. If you get caught in the storm, that’s your bad luck. The initial crime was so grave, and the inaction of the town’s people so abhorrent, that the response is going to be far harsher than it would have been if the traditional means of justice had been applied at the time. High Plains Drifter is in a sense a manifestation of the kind of righteous anger that is prevalent at this point in 2018. People who were for too long shamed into silence are finally capable of responding and setting things straight. This picture should also be a cautionary tale for the corrosive and destructive nature of revenge, and how it can end up doing more harm to the victim than to the guilty party.

I have written previously about how the Western and noir have quite a bit in common, namely their attachment to outlaws and anti-heroes, and most importantly to fated destruction. High Plains Drifter is about that slow train coming. Like Henry Fonda’s character in Once Upon a Time in the West, the day of reckoning is fast approaching. There is no way you can bargain with death. It’s coming closer every day, no matter what you say or do. It is interesting to consider the connection between this movie and Eastwood’s later picture, Pale Rider, which was released in 1985. Both are full of symbolism and seemingly supernatural characters, who have come back to Earth to inflict absolute justice. Pale Rider sticks far closer to the standard Western formula, but is a fine film and well worth a watch, especially if you enjoyed High Plains Drifter.

High Plains Drifter is one of the most unusual and compelling Westerns that I have seen. It is subversive, disturbing and all kinds of brilliant. For those who preach an eye for an eye in criminal justice, should take pause at how this picture’s rape scene makes them feel. Do we really want to turn ourselves into that which we fight against? Without a grave, this soul walks the Earth, unable to find peace. High Plains Drifter could be considered a supernatural Western, though nothing is confirmed in plain language that we are dealing with a lost soul intent on revenge. Clint Eastwood’s filmography, both in directing and acting fields, is remarkably impressive—and he’s still going. High Plains Drifter is, in my opinion, his finest work. It is challenging? Yes. Disturbing? Yes, but it has more depth and more to say than the majority of Westerns, and hell, movies in general. That slow train is coming.