Thinking of you. Sending you love. Deepest condolences. Sorry for your loss. These exchanged between well-meaning people to those experiencing a loss come flooding in immediately after a death. The further removed from the date of the death, the less commiseration one receives until they stop completely and you’re reminded that the only person that has to deal with the void every day is you. This familiar reality is currently being tackled by a new series airing on Facebook Watch. Sorry for Your Loss, created by Kit Steinkellner, follows Leigh Shaw (Elizabeth Olsen) as she confronts the shattered remains of her life after her husband Matt’s (Mamoudou Athie) sudden death. There is no pretense with this show; we learn through its opening scene that Leigh is struggling and that her husband has died. Every interaction we see between Matt and anyone else is through flashbacks seamlessly interwoven through each memory association Leigh experiences that makes her think of her husband. Each flashback provides a rich depth to Matt, Leigh, their relationship, and how our interactions differ based on the perception through which we view events. Shot beautifully with a warm color palate, Sorry for Your Loss provides a sympathetic and relatable journey through loss and how we rebuild our lives in the wake of personal tragedy. 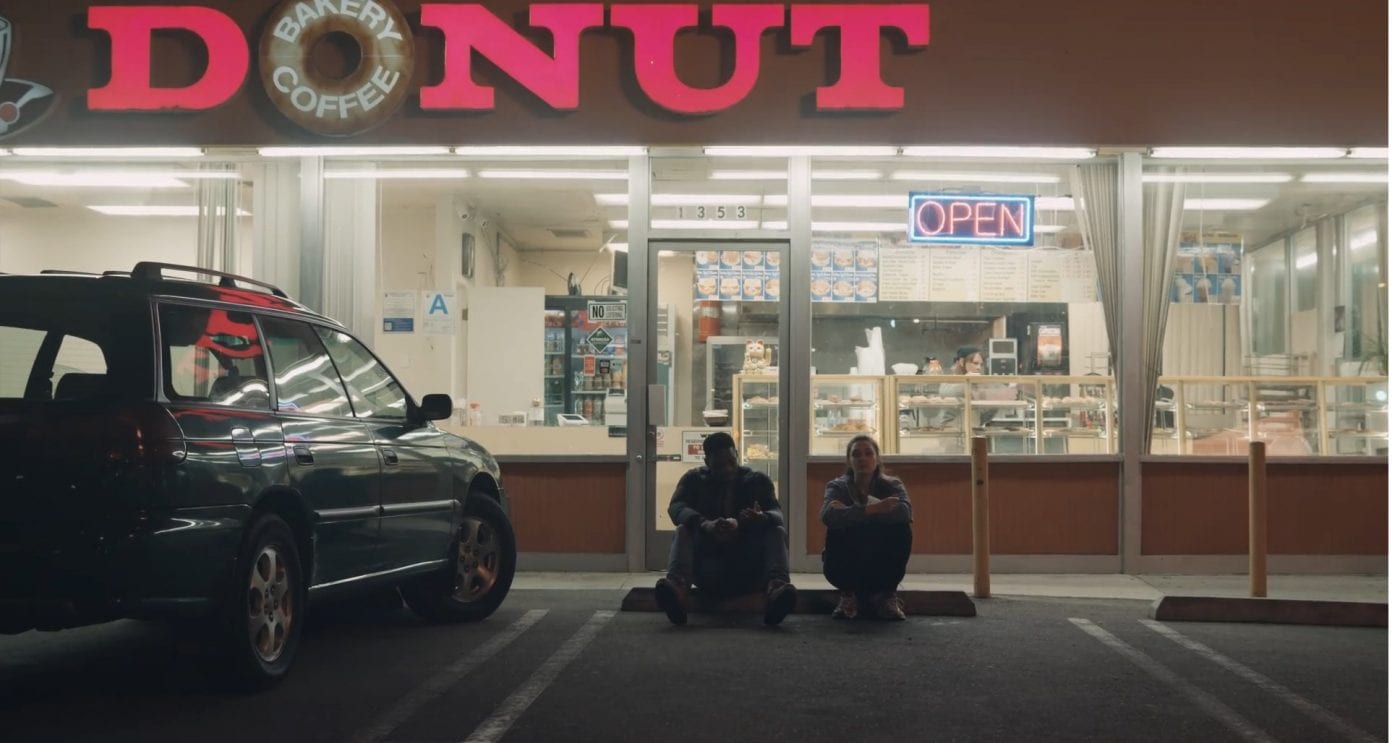 When you’re hit with a death so close to you, it’s incredible the things that are most difficult. Unable to return home to the apartment she shared with Matt, Leigh has been living with her mother Amy (Janet McTeer) and sister Jules (Kelly Marie Tran) her live-in support system. Being there for Leigh isn’t always easy. Her moods shift suddenly, she is often pithy, and she is critical of many of the things people say to her. The bereaved isn’t angelized through Sorry for Your Loss, but rather, we see a complete picture of a person transformed by an essential part of the human experience. Despite the knowledge that those around us will eventually die, this awareness doesn’t help when we’re the ones left with realities such as going to grief group once a week. Leigh continues to teach barre classes at her mother’s studio wherein she and her sister are both employed. She is unable to keep writing her advice column, despite her editor’s insistence that whoever she has become can still comfort the masses that write into her column seeking her guidance.

The expectations to be better and to find something that helps mitigate the pain is an aspect of grief with which Leigh struggles. She laments to Matt’s brother Danny (Jovan Adepo), a person she had struggled to get along with even before Matt’s death, that she used to tire of hearing condolences. She decides though that it’s even worse now that they’ve stopped as Leigh runs into people that know Matt has died and ignore it as if nothing happened. The premiere episode concludes with Leigh standing in front of her apartment, on the precipice of accepting her new life and the grief that will accompany her along the way. 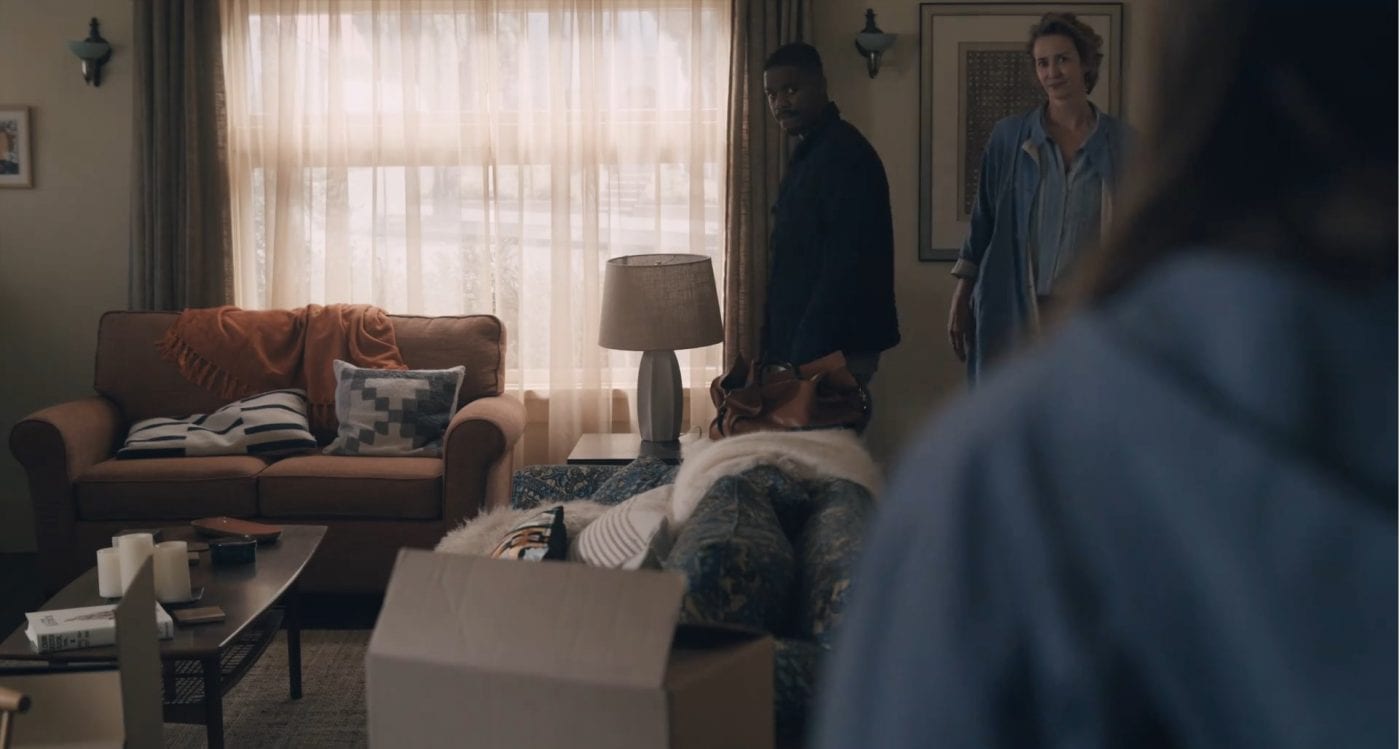 Keep, Toss, Give Away

With her support system in tow, Amy and Jules help Leigh sort through Matt’s and her belongings in the apartment they shared, bringing a flood of memories to the forefront of Leigh’s mind. Each item she touches brings an image to mind of something she shared with Matt or the future they were supposed to have together. There’s finality and acceptance to death once you go through the belongings of the deceased. When Danny arrives at the apartment, and Jules cries over Matt’s razor while helping the sorting process, Leigh is forced to contend with the reality that she is not the only one mourning her husband. We have seen Leigh criticize those around her for experiencing their emotions for being selfish or making the experience about themselves. Acknowledging the fact that her grief is shared leads Leigh to be open to the revelation that there are aspects about her husband that she never knew.

Amy questions Leigh about a credit card she discovers in Leigh’s freezer; Leigh plays it off, but the truth is that she never knew about it. Danny finds things hidden within Matt’s belongings that Leigh didn’t know were there and the sorting process and clearing out her apartment has revealed to Leigh, despite the control she thought she had over her marriage that there was a lot to Matt of which she wasn’t familiar. The final realization comes when she happens upon the bag of Matt’s belongings she was given the day he died and is unable to access his phone. Not knowing Matt’s passcode to unlock his cellphone hits Leigh in two different ways. Not only does it prove what Danny suggested—that she didn’t know Matt as well as she thought—but it is also keeping her from exploring his phone and being able to learn more about that which she didn’t know. Leigh is desperate for a link to Matt and additional answers into his life and being denied those answers is a gut punch to the grieving widow. 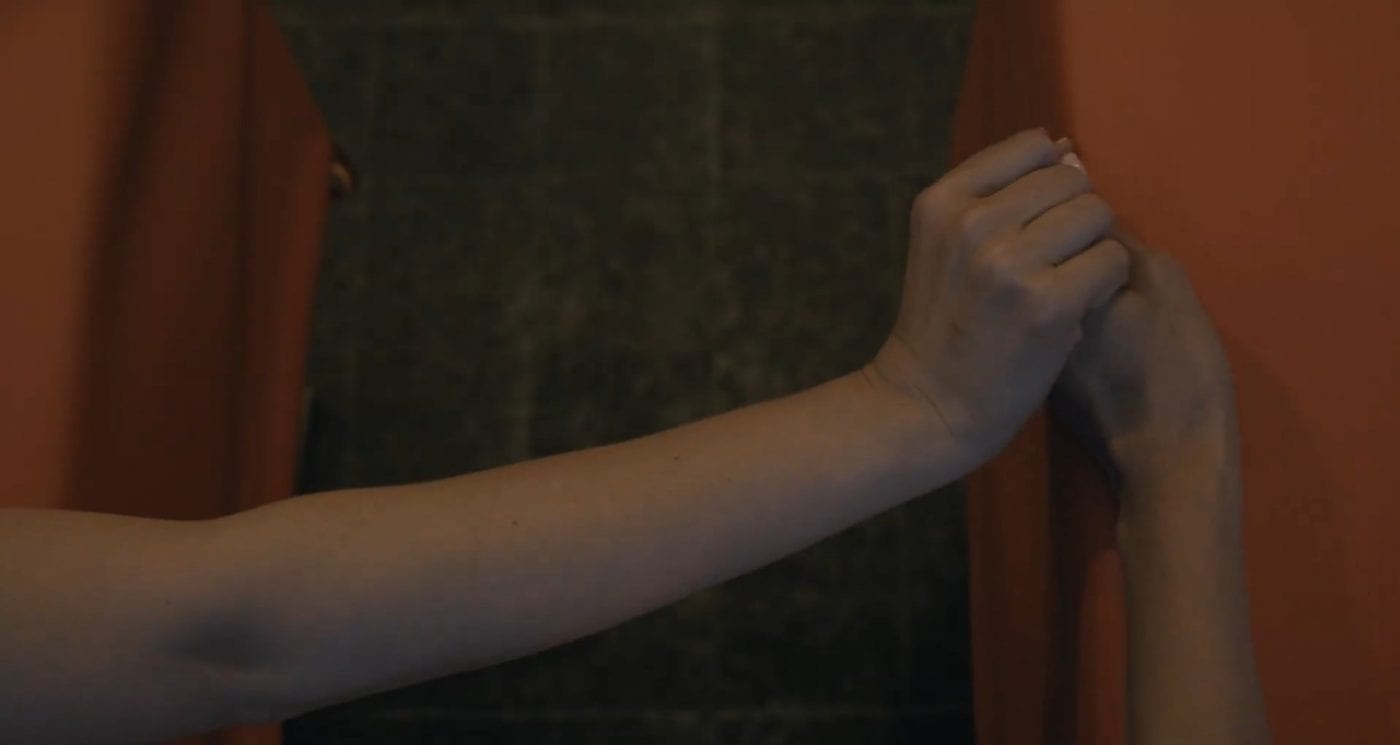 Even though Leigh claims her grief group doesn’t usually help, she still goes because sometimes it does and those sometimes are occasionally enough to get her through another day. When Leigh sees someone handling grief much differently than she is, with the poise of Jackie O., she wonders if her Courtney Love-like method of grief management is the most beneficial. Pushed into socialization and self-care by her mother and sister, Leigh confronts the fact that she doesn’t have all the answers. Leigh admits that she is angry all the time, at the universe and everyone in it, for their culpability in her being dealt this hand. In reaching out to the Jackie O. from grief group, Leigh begins to accept that everyone has a unique struggle with grief, and meeting people where they are with empathy will benefit her journey, as well.

At lunch with Leigh’s friend/former editor of her advice column, he confides to Lee that he is engaged primarily due to her husband’s sudden death. Knowing that Matt’s death has inspired those closest to her to seize the day and make the most of their existences is a crushing blow to her. Leigh longs for the life she was supposed to live with Matt and would rather have that opportunity than for his premature death to inspire others to live their lives to the fullest. On the one hand, the world revolves around those who are grieving, and people go out of their way to try to make you feel better.  On the other hand, however, you can see that people are in a holding pattern, waiting for you to “get over it’ or to “move on.” In many ways, you’re in the same holding pattern when you lose someone close to you. Desperately searching for answers and something, anything, that will make you feel like a person again. You feel as though nothing ever does make it better. Each happiness that you find is only temporary until you can come to terms with the fact that unexpected things happen that change your life and the key to building a life on top of the one that collapsed is resolving yourself with that fact and letting go of the anger holding you back. That looks different to everyone, and there’s certainly no one universal way to grieve but Leigh’s understanding of both the many faces of grief and that other people share in her pain from their perspectives goes a long way in helping her cope with her new life. 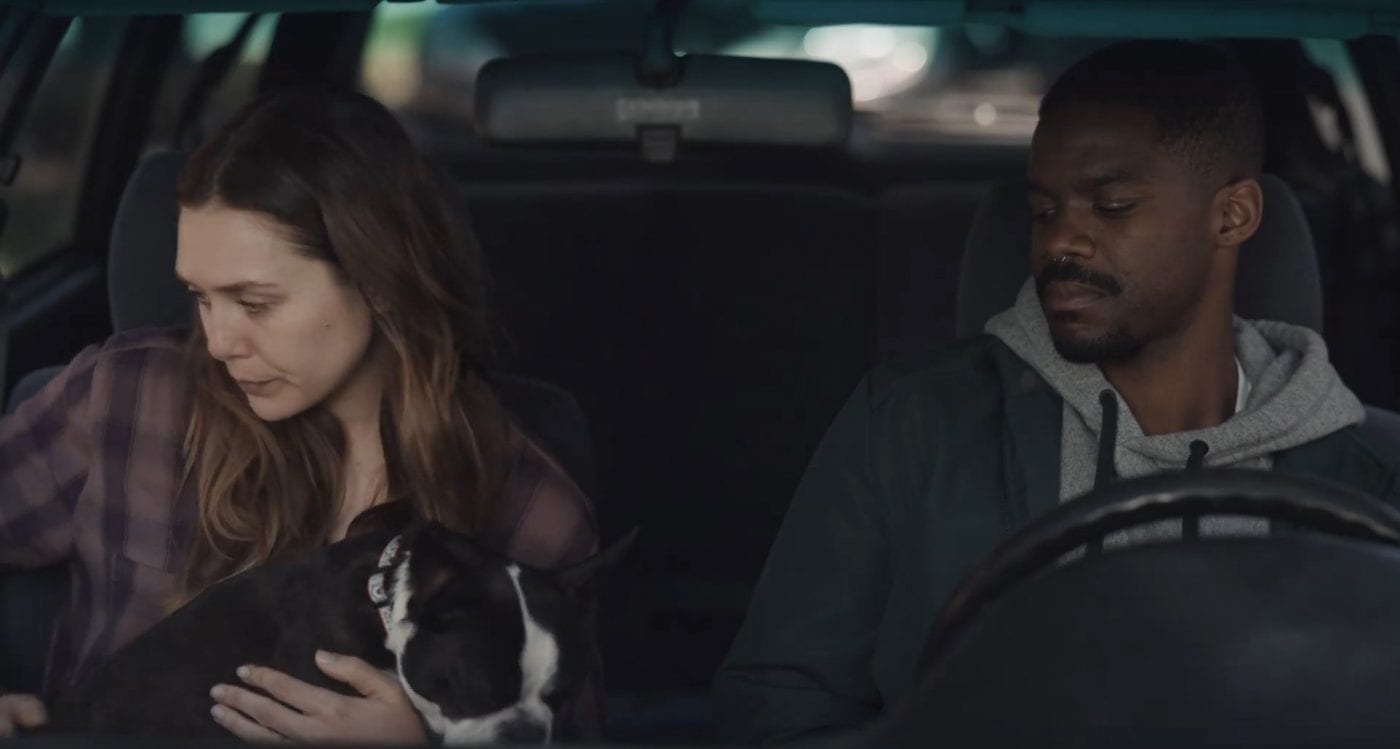 The first four episodes of Sorry for Your Loss went live on Facebook Watch on the same day, and by the conclusion of the fourth episode, it had not yet been revealed to audiences how Matt died. Show creator Kit Steinkellner made a powerful decision by withholding the cause of Matt’s death and instead forcing focus on the life he had lived, and the life he created with Leigh. The most important thing up to this point in the show is that Matt’s gone, not why he died, and by reminding audiences of that fact it was easier to learn about him through the series’ flashbacks and see him from the perspective of each person that knew him.

In the fourth episode of the show, we see a flashback of Matt admitting to Leigh that he suffers from depression. He is open with her about his methods of regulating his depression but also tells her that he occasionally struggles and sometimes things get “really dark” and in the past, that fact that has been too much for some people. This flashback is brought about when Leigh saves a dog from being hit by a car bringing back a flood of memories of her bond with Matt’s dog. It was learning that Matt’s dog was taking Prozac that led to Matt admitting to Leigh that he did, as well. Leigh warned him against the dangers of over-medicating and the long-term effects of anti-depressants. Leigh’s immediate attempt to micro-manage Matt’s mental health made him feel as though he couldn’t trust Leigh in the form of being open with her about his mental health. Matt makes a brave admission when he relays that being diagnosed with depression was the happiest day of his life because it was then that he realized he “had a disease, not a character flaw.” 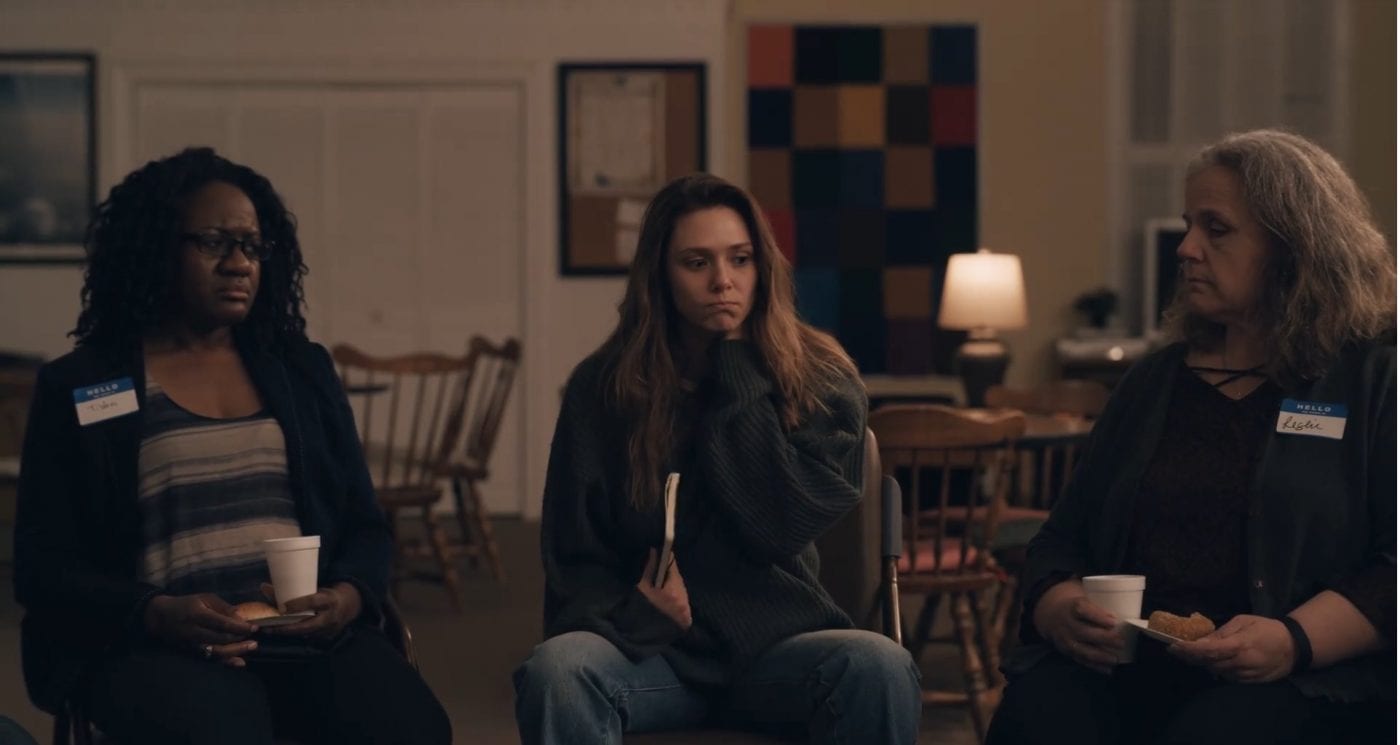 Sorry for Your Loss had already made a profound statement on loss, and the universal human struggle of death before Visitor revealed that the show had even more to say. Addressing Matt’s depression directly and presenting the different ways in which people react when you tell them you suffer from depression was a significant decision. The World Health Organization estimates that more than 300 million people worldwide suffer from depression. Less than half of those diagnosed with depression receive treatment. Despite the high prevalence of depression, the stigma surrounding the disease persists. Depression is clearly a significant issue deserving of attention and the ways in which Sorry for Your Loss incorporated such a well-timed statement on mental health speaks to the power of the show. Sorry for Your Loss seems to have largely flown under the radar, the fourth episode shows just south of 50,000 views, but it is not something to be missed. In a time of turmoil and constant stress that seems to have ravaged every conceivable corner of space in our worlds, the wholly human journey promoting empathy and understanding that Sorry for Your Loss provides is precisely what we need in 2018.

More From: Sorry For Your Loss