“Only the good die young” as the song goes. Over the years there have been a number of TV shows that have made an impact on us here at 25YL, which we have been sad to see struck down in their prime. A season or two that grabbed us, and…that’s it. Whether there is some sense of completion, or we are left dangling by a finger from the side of a cliff, these are shows that we think are worth remembering, re-visiting, or even watching now for the first time. This week Rob E. King considers a show that made history feel as exciting as an episode of Game of Thrones: HBO’s Rome.

It is not a hard sell to say that HBO and the BBC’s Rome (2005-2007) ended too soon. We know many of the reasons why: expensive production in Italy, HBO cutbacks for historical productions, and strategic planning on HBO’s part. Creator Bruno Heller has cited a lack of structure for the show, claiming that while Game of Thrones years later would have a series of previously written books to show executives as a structure for the future of the series, he and his team had been making Rome up as they went along.[1] A more recent HBO series that wore its lack of structure on its sleeve was Nic Pizzolatto’s True Detective Seasons 1 and 2. While one might argue that Pizzolatto had the pantheon of cosmic horror stories from Derleth, Lovecraft, Ligotti, and company to pull from for Season 1, Rome had history. But given that breadth of material, we also know that Season 2 of Rome was made to hurriedly cover material planned by Bruno Heller out through Season 4, which would have led to the rise of the Messiah in Palestine for Season 5.[2] What more could be required to prove a future structure for the series? There surely wasn’t a lack of talent or a broad stroke of vision.

The key to Rome is not simply that it was a pioneering show for grandeur and historical sets for HBO. It also ushered in the environment for Showtime’s The Tudors (2007), and Hollywood films like 300 (2006), as well as the Clash of the Titans (2010) reboot. Ray Stevenson’s career saw a boost with his role as Titus Pullo, an unabashedly oversexed, heavy-drinking, and violent soldier who charmed with his crude humor and spirit of loyal comradery to Lucius Vorenus. Stevenson would follow this series with turns for Marvel properties Punisher: War Zone and Volstagg in the Thor films.

Never one to turn down sex from brothels to Cleopatra, Pullo’s scandals all but paled in comparison to the show’s Atia of the Julii, played by Polly Walker. Of the many threads to follow in this show—Caesar/Antony, Pullo/Vorenus, Pompey/Brutus—the struggle between Atia and her raising of Octavian (Augustus) against Servilia of the Junii and her son Brutus brings to the forefront some of the show’s most shocking and cruel moments. As the matriarchs move across the perilous chess board, they use all of their sexual prowess, along with superstitious pagan rituals and assassins to survive the dangers of the period. The show managed to mix all of HBO’s bestselling points up to its inception—sex, violence, and political intrigue. That it was cancelled was a shock to audiences. 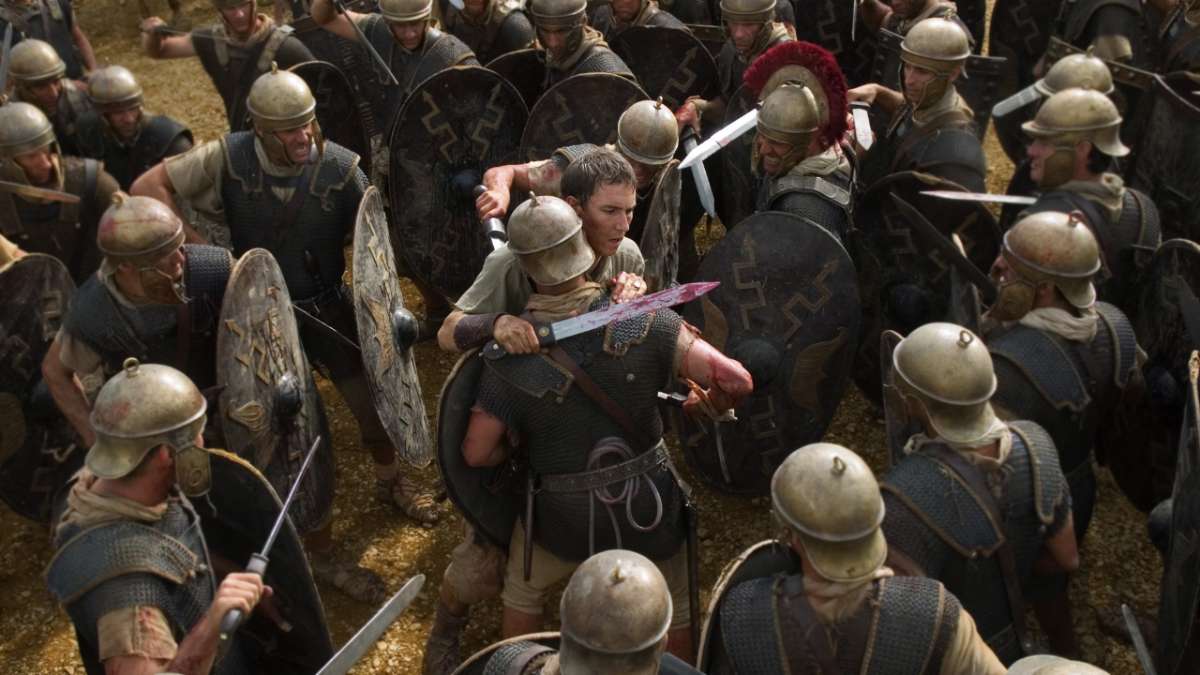 Rome certainly had its fans and critical acclaim to back the shock. By Season 2, it was popular enough that t-shirts had become available for Teams Servilia and Atia. One could argue that this was one of the earliest, evident Team rival campaigns in popular culture since The Sopranos gave a name to binge television. Ann Becker tells us in a press announcement from 1995 that “Rome’s premiere notched a 9.1 rating/13 share in HBO homes for its premiere episode. That made it the network’s highest-rated program since the fourth-season premiere of Six Feet Under in June 2004.”[3] Still, according to Monica L. Cyrino, editor of academic books covering Seasons 1 and 2, “critical acclaim and a substantial audience of nearly eight million viewers were not enough to justify the nearly $120 million price tag of the first season alone.”[4]

Rome’s last season aired in 2007, a time when most were still deciding if they would be moving from their Myspace profiles to Facebook (and this after transitions from Friendster only a few years before that). That is to say, this was before widespread social media had its influence. Netflix was still mailing DVDs through the mail, so no one was taking to central platforms like Twitter and Facebook to demand and beg on-demand studios pick up the series as we see examples of today. Their megaphones would have been in more obscure e-mail, forums, etc.

Of course, we cannot ignore that a Deadwood movie still seems to be on the horizon, and The Sopranos is getting a prequel Hollywood film.

Looking to scholarship on the series, a common, prominent theme shines through as maybe one of the machinations that made the show work: its narrative usage of “accidental history” through the perspectives of Titus Pullo and Lucius Vorenus. In conversations about the show, someone will always bring up that the characters of Pullo and Vorenus were actually in the writings of Caesar. They were real. That is true, but this series takes their brief mention and moves beyond it, making them our eyes into the world of Rome as a Republic on the verge of becoming an Empire.

The view Pullo and Vorenus allow us is remarked upon by Christopher Lockett in his essay “Accidental History: Mass Culture and HBO’s Rome,” where he states, “[s]ignificantly unlike I, Claudius […], Rome concerns itself with the lower classes as much as with the intrigues of the aristocracy.”[5] Examples of the duo’s stumbling through Rome’s history include: Vorenus and Pullo attacking a caravan for their horse, unknowingly saving Octavius and Caesar’s emblematic golden Eagle; Pullo vigilantly observing, then attacking a gambling enemy from an earlier exchange, wherein he unknowingly saves Marc Antony, beginning a war between Caesar and Pompey; and Pullo impregnating Cleopatra, who convinces Caesar it is his child. 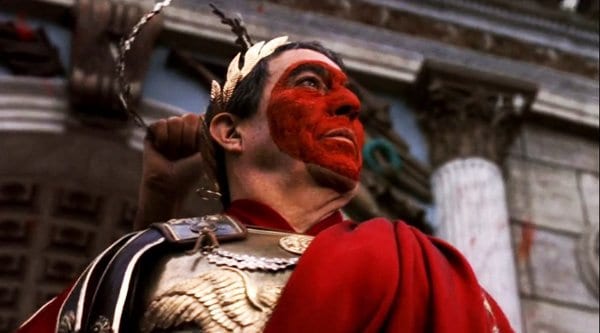 As I stated earlier, the show elevated the sex and violence of The Sopranos to an extreme that would pave the way for Game of Thrones years later. Some of the cast have felt that their show was indeed stolen by Game of Thrones[6], and it is difficult to watch the series now and not wonder how true that is. Anyone jonesing for Game of Thrones in its absence should turn to Rome immediately. The experienced Lannister cruelty of GoT first found its place on HBO screens when Atia ordered the gang rape and beating of her rival Servilia. So, even if this series had no influence narratively in the transcription of Martin’s novels onto screen, it was at least a road map made perfect to pilot Game of Thrones on its journey to production.

How is it that it could have failed; that HBO would find itself unwilling to continue its production? To answer that, it is best to illustrate a view of the time, looking to Marc Peyser’s point in Newsweek’s “HBO’S  Next  Empire:  All  Roads  Lead  To  Rome”: “With  The  Sopranos  entering  its  (allegedly)  final  season  and  the  departure  of  Sex  and  the  City  and  Six  Feet  Under,  the  channel  is  running  out of  water-cooler  shows.  Many  of  its  programs—Deadwood,  The  Wire,  Curb  Your  Enthusiasm  and  Entourage—are  critical  hits,  but  none  of them  is  burning  up  the  ratings.  In  fact,  HBO’s  prime-time  viewership  is  down  18  percent  in  the  last  year.”[7] Remember, this was before HBO offered an on-demand platform. Rome’s cancellation seemingly resembled a closure to a kind of phase two to HBO’s pioneering of binge television series.

It is a shame that we will never get to see Season 2 of Rome unpacked into its original intentions through Seasons 3 and 4. Perhaps, as opposed to prequel upon heaping seasons-full of Game of Thrones exploitation spin-offs, we could see an expansion of its predecessor in Rome? This could begin at Heller’s intentions for Season 5 with the rise of the Messiah, be that in film or in series. Augustus’ rise would be as thrilling. Rome maybe exemplifies one of HBO’s most expensive and immaculate losses from its period piece era, including Deadwood and Carnivale, but with all of the evidence and influence added, it is an undeniably powerful series that cannot be ignored.

[7] Peyser, Marc. (2005). HBO’S Next Empire: All Roads Lead To ‘Rome’: Can the channel’s $100 million bet sing like a Soprano? Ratings are down 18 percent. But don’t cry for the pay-cable juggernaut. This fall, it reloads with two new shows–a killer drama and an extra-special comedy–and says so long, for now, to a budding, buzz-worthy hit. Newsweek, 66.