We chase riddles hoping to find some sense of answers about the mundane and the spectacular. Whether it’s through our entertainment, education or life experiences, there’s an underlying hope that somehow we can understand the mysteries that have alluded us for centuries. Do we ponder the unknown or embrace enigmas? Audiences in 1968 had such a choice when faced with a masterpiece that delicately wove itself into the very fabric of human consciousness. Their first run odyssey began among the darkness.

Of Monoliths and Men

The monolith stands as a larger than life monument among 2001: A Space Odyssey’s unfolding stories. One of the most debated aspects of the film is how its own ambiguity reflects perceptions at any given moment. No musical cues to signal intentions, no visual frames scattered across its surface to amplify instructions. This slick black structure is full of the voids humanity can’t stare into and dare not interfere with at their own peril. There’s an irony in the fact that the curiosity extends itself more completely as intellect and rationalization grow. Dr. Floyd and the team are perplexed by their own monolith, yet approach it with an underlying feeling of knowing that betrays the item’s importance. The act itself seems like a nod to man’s boredom with discovery, a symbolic wave to the fact people often think they have the answers just seconds away from a firm grasp. Failing to find the truth behind the monolith, or any great conundrum for that matter, both drives the spirit and cuts the heart out of forward momentum.

As the loud tone rings out, it becomes a siren call pieced together by the forgotten instincts of warnings and premonitions. The simple sound cuts through the mind of its listeners to reach into the most primal notions that were knowingly left behind as the myth of moving forward gave humanity a potent drive. It only stands to reason that the next encounter with a monolith comes with an unending pull that propels Bowman’s pursuit into the psychedelic hypnosis of the Stargate. In these moments, destinies are fulfilled as each group portrayed in the film chooses to embrace their curiosities and ever-wandering hunts for some unspeakable truth. That complete nudge creates the ultimate connection between the hominids’ fascination with the most primal urges to an evolving humanity’s basic characteristics.

There is an underlying theme of time itself that challenges the very status of humanity. Time is, in fact, a great enemy that disguises intentions under the role of constant companion. As the hominids battle to the death, violent symbolism becomes a distinct marker for the timely ‘60s version of war that was pulsating throughout the world. Bloody battles are not limited to this period but instead fixed upon the twisting timelines endured from one generation to the next. The weapon becomes the focal point for reflection as well as destruction. With one distinct graphic match, the varied connections between past and present are thrown into one spellbinding representation. Born from a bone catapulted into the sky, the organic creation finds an uncanny twin in the satellite that hovers among the stars. Much like the push to connect the hominids with man’s own perceptions about dormant inclinations, the film strives to show the growth and lack of progress that is at the core of life itself. The similar shape emphasizes a hidden human connection with the all too frail past.

There is a lesson about the influences viewers like to keep neatly hidden but are all too clear in moments that embrace the most primal instincts. Whether it’s in the depths of space or captured in the spirit of hominids fighting for supremacy, a sense of survival burrows under fragile skin. Their blatant determination to be the best translates over centuries of evolution and rational thinking. Forward momentum only adds a new player in the changing world that shifts under a generation of well-worn souls. Machines capture a futuristic form of human organic programming that holds on to the best as well as the worst traits encountered by imperfect creators. In that respect, humanity hopes the coming machines will embody the very things that make ideals, without the foibles. 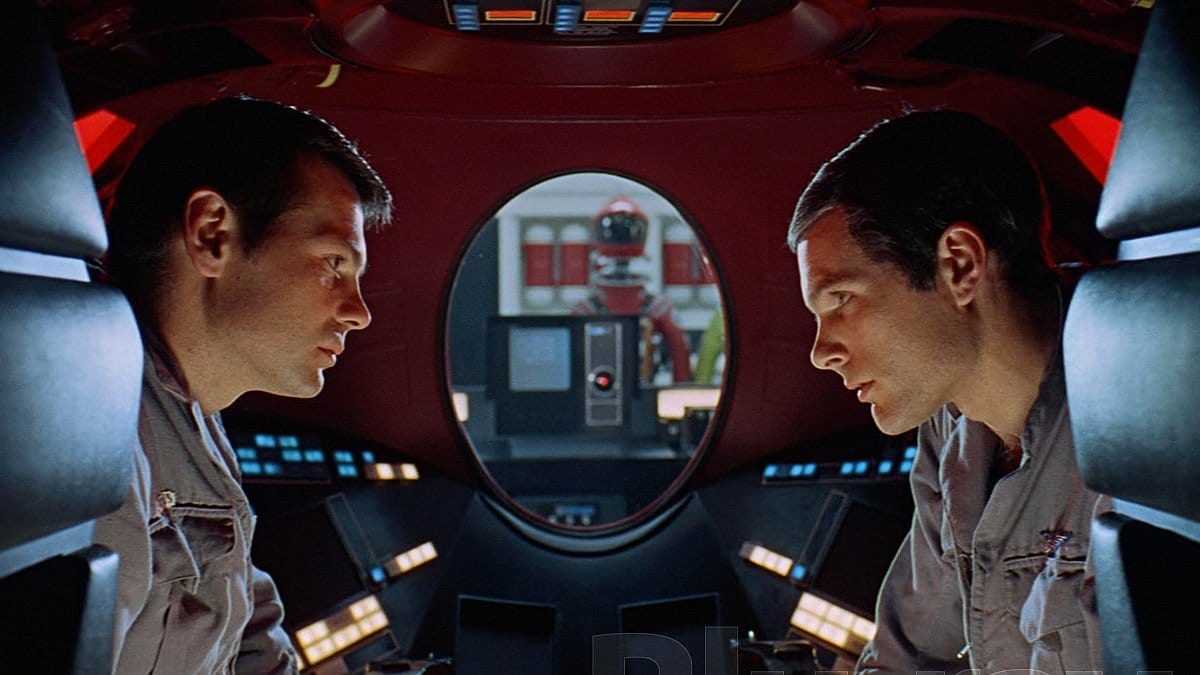 For 1968’s most ardent viewers, Hal 9000 was a nightmare wrapped among the dream of evolving technology. He was both a warning and an impossible dilemma that existed as nothing more than a twinkle in the eyes of adventurous fantasists. What they couldn’t know and couldn’t possibly see was the broad influence machines like Hal would have on society. The automated assistants that take their places on corner shelves while lingering as an afterthought during busy days and nights. A concept ever-changing as the devices take in more information than a person could comprehend during a lifetime. Charming and more confident with every learned experience, these creations are just a glitch away from becoming a destructive force.

Humans like to bounce around the concepts of feeling and emotion in the machines that become a part of our lives. It’s a testament to the film that it plays with these sentiments in much the same way. With every conversation, Hal is given a depth and persona that might have been otherwise missed. Adding the POV gives audiences that heightened effect of understanding or even putting themselves into the space of this otherwise lifeless computer. Only the build-up can convey the emotional connection needed to appreciate Hal’s final revelation of fear as Bowman carefully dismantles his entire existence. As the device hauntingly sounds out its final bars of “Daisy Bell”, the viewer is left balancing their morals about a creation’s right to existence under any conditions. 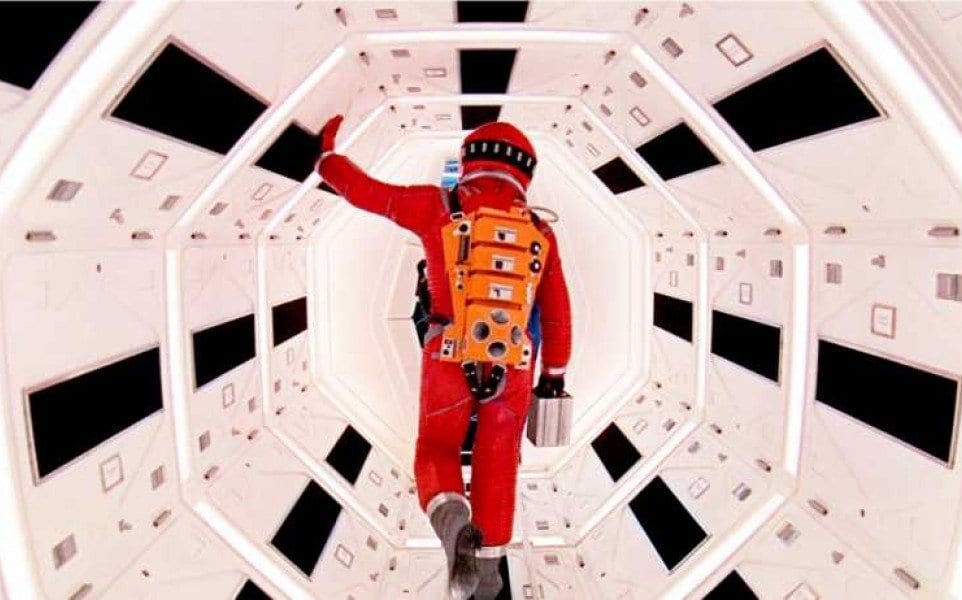 Words can overtake the meaning of any moment. When they are taken out of the equation, it forces viewers to zero in on the details often overlooked. 2001: A Space Odyssey prods audiences to take a journey into realms of expression other than the exploited language. There are no quick steps to understanding; instead, Kubrick is asking the audience to take in the body language, soak up the musical cues, and find disturbing solaces in the silence. It demands a perpetual state of awareness that punishes its audience for even brief moments of mental abandonment.

The film’s score is packed with interlopers who make up some of the classical realm’s greatest works. Although Kubrick initially chose an original score by Alex North, the director veered away from traditional cinematic compositions in favor of striking classical options. These pieces enliven the spirit when necessary and descend the viewers’ perspectives into unease at other times. Selections like Strauss’ Also Sprach Zarathustra not only enlivens the wonder of what is unfolding, but the selections also take on a new life as they signal emotional responses in the viewer. When used in correspondence to the dark recesses of theater, the sound only amplifies the perception of depth and unending possibilities that the characters respond to on-screen. As “The Blue Danube” echoes out, the viewer is enthralled with the movements that are as swift and precise as the waltz it usually accompanies.

The greatest trick of 2001: A Space Odyssey is its ability to convey some of the most beautiful and wondrous images that film has ever captured. Every shot is chosen to provide the maximum effect with each new venture in futuristic extremes. Colors are vivid when necessary and bleak when called for. The possibilities of space paired with the very human machinations of traversing the infinite are highlighted by crisp, clean elements. Spacecrafts spin with careful movements that defy the normal conventions of what viewers see in their sci-fi dreams. The Stargate presents a rich visual feast full of intricate patterns of light. As the frames pause on Bowman’s various twisted expressions, the colorful tones illuminate an otherwise disturbing journey into the unknown for both the character and the audience.

There is arguably no greater film to sum up 1968 than the legendary 2001: A Space Odyssey. It encompasses the period’s goals, fears, wonderment, and longing into one perfect cinematic package. This epic was not a scream to the masses, but a whisper to those who could hear its call. Even today, it begs to be heard again.