I recently had the pleasure of speaking with director Ben Eckstein about his upcoming film Zero Fucks, which is about to enter the crowdfunding stage to help with post-production costs. This film has an exciting concept, and there’s a significant Twin Peaks presence in the cast that we speak about. I hope you enjoy the interview!

AG: For those unfamiliar with this film, how would you explain the concept to them?

BE: Zero Fucks is a dark, subversive, post-apocalyptic political satire about four people and a talking cat that think they’re the lone survivors of a nuclear apocalypse until Ivanka Pump shows up on a quest to destroy what’s left of their world. I imagined that after years alone, this small group would sell off many social norms that are no longer relevant to them and develop a unique dynamic of their own. I wanted to explore the intimacy of their world and test its strength against unexpected influences, a talking cat, and a beautiful woman who also happen to be Donald and Ivanka. Of course, there’s a political allegory here, but I was principally interested in archetypes and the larger story of madmen with power destroying society, which is a scenario the world seems bent on re-exploring every few years. So, what are we trying to find out, why are we attracted to power at the hands of megalomaniacs? 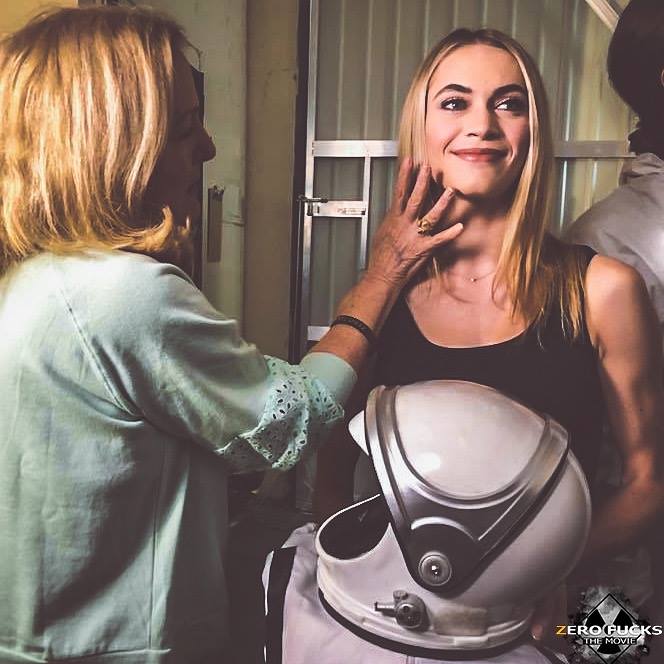 AG: Where did the idea of John Pirruccello playing a character based on Donald Trump, only as a cat, come from?

BE: It does not feel to me like too much of a stretch to imagine Donald Trump as a cunning, evil cat. John brought relish and nuance to the role, and you can tell he was having fun with it. There are no bad takes with John; he’s always on and always interesting. His performance is seductively funny and simultaneously disturbing, and he’s a perpetual scene stealer.

The idea for the talking cat character did not really come but was given to me by the muse that was dictating this story. I wrote it all in a flash with voices in my head guiding my fingers as I typed, more dictation than creation, that’s how I write most of the time. 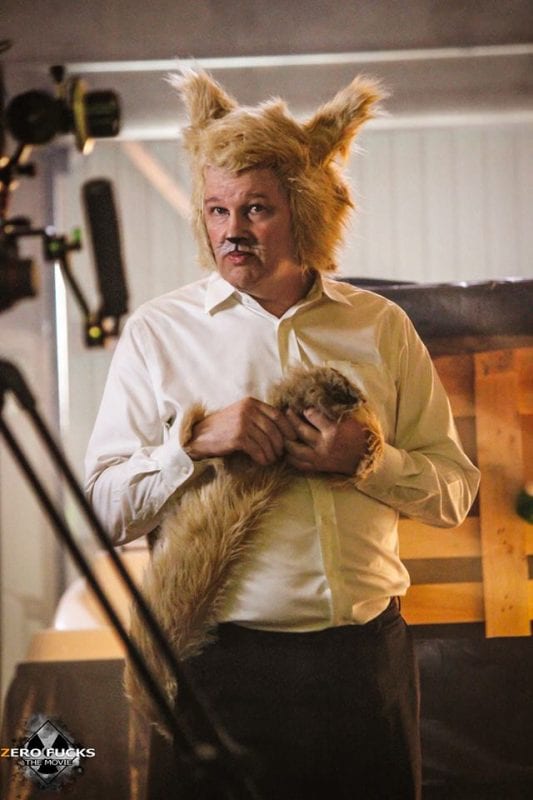 AG: What was it like writing and directing this film for you during such turbulent political times?

BE: It felt like I was doing something real that might add to the conversation and make some difference. Zero Fucks is sounding the alarm that there’s danger up ahead. Our reality seems stranger than fiction at moments, but I feel that Zero Fucks is always still slightly ahead of the narrative and stays relevant because it’s more than a story for the moment, it has bigger scopes and examines a larger picture. In fact, as the days go by, and things seem bleaker, it feels more and more urgent that the movie gets made and reaches an audience. I think it can help people find a voice and articulate difficult feelings and maybe even inspire counteraction.

AG: Looking at both the cast and crew, this film has a large Twin Peaks presence. Was that something you intended to do, or did it just happen to work out that way?

BE: Both. My wife, Krista Husar, together with Joanna Ray cast Twin Peaks: The Return, and she cast Zero Fucks so naturally there was a crossover. A cast that fits in the Twin Peaks world would be an easy fit for Zero Fucks. I’ve worked for years in the theater with about half the cast including Sarah Long and Elizabeth Anwise, and the rest, John Pirruccello and two other actors fit perfectly into our dynamic, and we felt like a happy family on-set—good spirits, positive, creative energy, lots of trust and support. 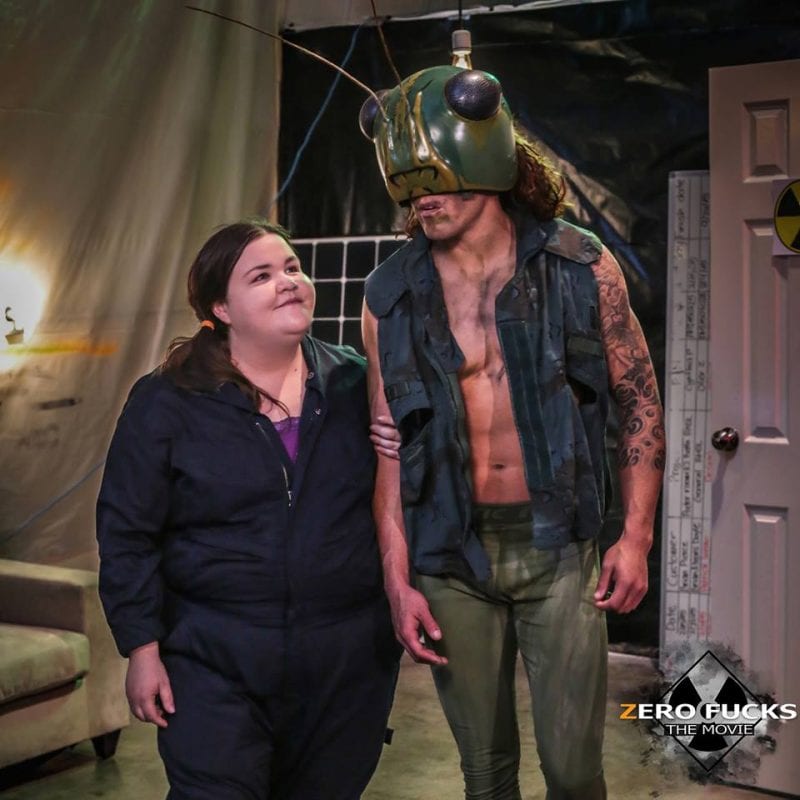 AG: What can viewers expect from this film?

BE: To laugh their asses off, to be surprised and delighted by the performances and filmmaking. Two days after watching the movie, they might have a strange, uneasy feeling in their stomach that behind the million jokes was a scary and troubling story that shakes them to the core.

AG: This film is getting ready to enter the crowdfunding stage. How can those that are interested get involved in that process?

BE: We just launched a crowdfunding campaign on Seed&Spark for the post-production of the film. We’ve spent all of our own money to get Zero Fucks this far and, straight up, we’re tapped out. There is so much goodwill and interest surrounding this project, but we simply can’t self-fund the final step, post-production. So, I invite people to join the Zero Fucks movement and make this movie with us. To see the trailer and to get involved, go to https://www.seedandspark.com/fund/zerofucksmovie.

AG: Thanks so much, Ben, for taking the time to speak with me. In closing, any final words for those that are reading?

BE: If you support independent, original and bold cinema, you’re going to love Zero Fucks, and I can’t wait to share it with you. 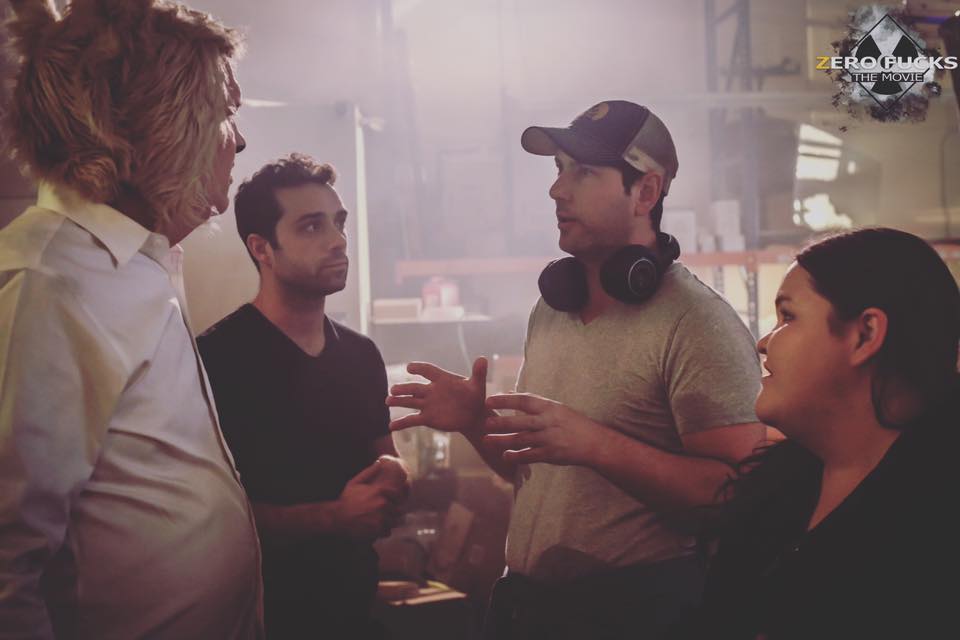