Here at 25YLSite, we handle a lot of heavy lifting. Analysis, interpretation, deep discussion, introspective interviews…you name it, we’ve got it. “Favorites” takes a lighter approach to the material we normally cover. Each week, we will take you through a list of favorites—whether it’s moments, scenes, episodes, characters, lines of dialogue, whatever!—in bite-sized articles perfect for your lunch break, a dull commute, or anywhere you need to take a Moment of Zen. So, sit back and enjoy this week’s offering: Jason Sheppard’s scariest non-horror movies.

A funny thing is happening in horror cinema these days—slasher movies are experiencing a creative resurgence, and audiences are flocking to them as if stumbling onto the cool waters of Camp Crystal Lake after spending the day trampling through the muggy woods. Of course, we know what happens to swimmers of Crystal Lake even though it’s been a decade since we’ve seen the place on-screen. In that period, the slasher movie had all but disappeared from mainstream cinemas, replaced by superheros and adventures in distant galaxies.

This weekend, the slasher film is slicing it’s way back into the hearts of audiences as David Gordon Green’s Halloween looks to carve up record R-rated box-office dollar amounts. Very good news for slasher fans, but with Halloween (the actual day, not the movie) approaching, what if you want to experience a few good movie scares through genuine suspense and surprises not featuring a masked-wearing psycho? Here, I look at five personal favorite frighteners (made by a few of cinema’s all-time greatest storytellers) that are sure to thrill and of course, terrify.

It’s hard to believe it’s now almost 30 years since this movie was released; however, don’t let age deter you—Cape Fear is as powerfully unnerving today as it was during its release in the fall of 1991. It was probably unintentional on director Martin Scorsese’s part but looking back, I’m sure he got a perverse kick that Universal opened this movie the same weekend Disney released the animated Beauty and the Beast. That’s kind of the thing Cape Fear’s sadistic Max Cady would surely have cackled at.

Set in the the very early 90s south, newly-released felon Cady (Robert De Niro) makes it his only mission to strike paranoia and terror into the lives (and minds) of Max Bowden (Nick Nolte) and his family. Bowden, who was the public defender responsible for Cady’s incarceration, comes face-to-face with Cady, all while God’s fury possesses the damaged soul. Cady stops at nothing to shatter Bowden’s life, and the lives of his wife and daughter. If you ever wanted to witness an inhuman monster steal the innocence of a teenage girl right before your eyes, this movie is for you. When this same teenager screams for her life during the film’s climactic boat showdown, she screams knowing the girl she once was is now gone—destroyed by a leech of purity. This is one reason why Cape Fear will leave your nerves frazzled.

Scorsese, working with a $70 million budget (his biggest at the time), created one of the most petrifying and distressing nerve-shredders in movie history. Also consider that Scorsese released this movie only one year after he made Goodfellas. That’s a one-two punch that we’re not likely to see from anybody in this league anytime soon.

Cape Fear was a box-office smash, but it didn’t earn any Oscar love as 1991 was the year another horror movie, The Silence  of the Lambs, was released. However, don’t let the awards and history trick you: for my money, Cape Fear was and always will be the scarier of the two. 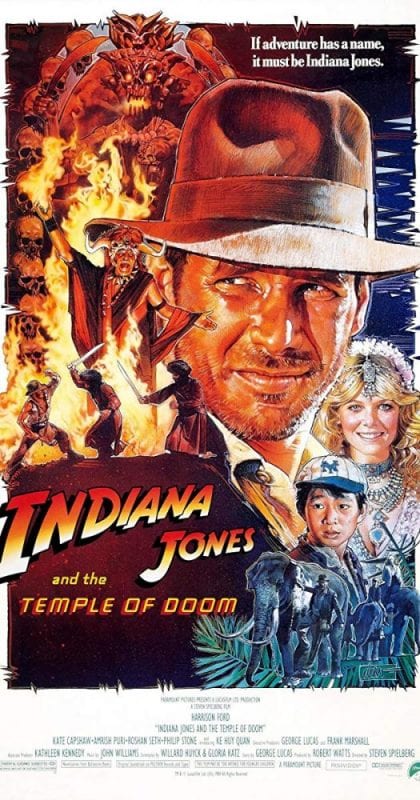 The last two Indiana Jones movies (Last Crusade and Crystal Skull) turned the beloved archaeologist/adventurer (played, of course, by Harrison Ford) into a ball of sentimental mush for a large part, but during his first two cinematic outings (Raiders of the Lost Ark and Temple of Doom), Jones was a mean, hard killing machine when the time came for it, and if you’re like me, this is the Indiana Jones you remember and love. Whether it was driving a truck full of Nazi’s to their deaths off a 1000 foot cliff or shish-ka-bobbing a Chinese gangster to his painful death, Indiana Jones was not one to think twice about ending a goon if they stood in the way between him and his “fortune and glory.”

In Raiders, Indy was witness to the power of God, but in Doom, he finds himself deep in the heart of hell. Doom is an often misunderstood, unfairly criticized masterpiece of giddy adventure mixed with blood-chilling terror, and I, for one, love every second of it. Even after witnessing very bad guy Mola Ram (Amrish Puri), ruler of the recently risen Thuggee cult and servant to goddess Kali Ma, rip another man’s still beating heart right out of his chest, we can’t turn away. I must admit, I regretted it; for months after first seeing Temple of Doom, I always believed Mola Ram was hiding behind the shower curtain in my parent’s bathroom, ready to jump out and collect my heart. Sure, Freddy and Jason were the symbols of 80s horror, but to me, neither were as scary as the evil, hellish foreboding, Mola Ram. 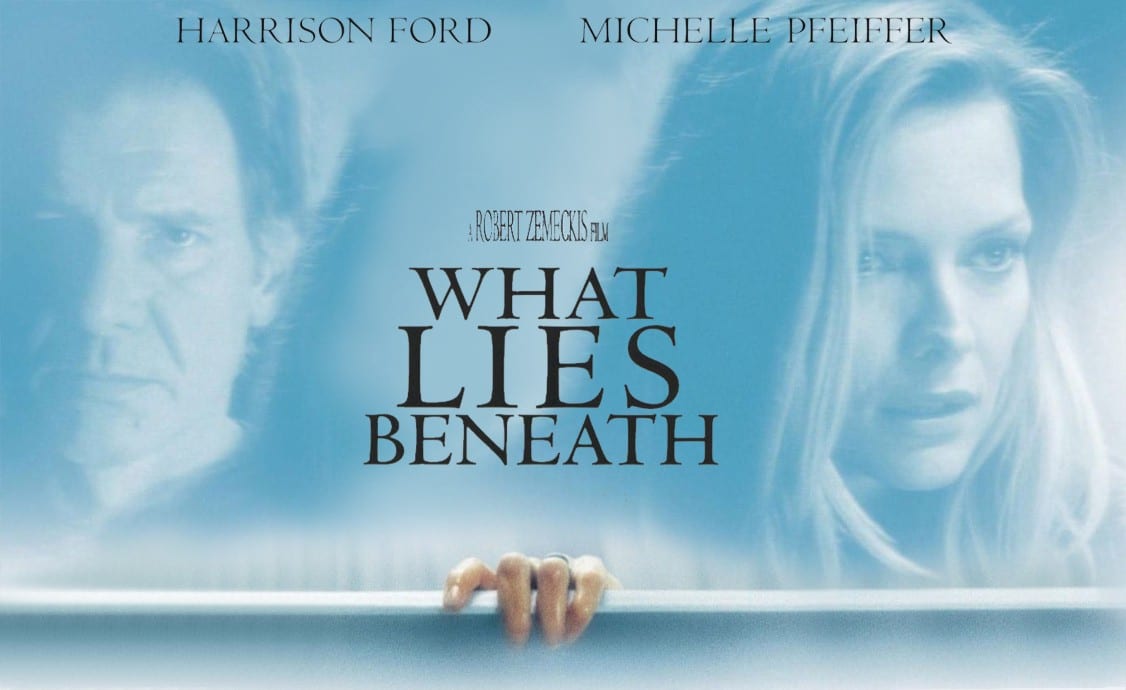 Okay, it may have one of the dumbest posters ever commissioned for a big-budget scary, popcorn thriller (you have Harrison Ford and Michelle Pfeiffer in your movie and you don’t feature either of them on your poster? Really!?), but aside from that, the movie behind that lame poster, What Lies Beneath, is actually pretty good and offers some well-earned scare-jumps.

Norman and Claire Spencer (Ford and Pfeiffer) are coping with empty-nest syndrome when a mysterious new couple moves in next door. Sensing something amiss with the creepy husband new to the area, Claire begins to snoop around convinced something sinister is at play. She’s not wrong, but the sinister incidents are happening in her home—not the neighbors—as the ghost of a young college student who Norman had a brief affair with (Amber Valletta) has come back to torment Claire. This while others are trying to convince her that it’s all imagined and Claire is actually losing her mind.

Directed by Robert Zemickis in the fall of 1999 (while he was waiting for Tom Hanks to lose weight for Cast Away), What Lies Beneath is a well-crafted spooky, ghost-house chiller that we don’t see a lot of anymore; one that takes time establishing its characters before it gets to the jump-scares. But once those scares start and build to a ghoulish end involving a bathtub, they absolutely deliver. 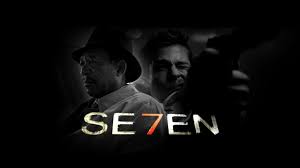 Horror during the first half of the 90s was remarkably different from the decade before it. While the 80s were flooded with ugly, grimy, cheap-looking hack-em-ups made by “directors” with little skill for creating tension or anything close to an actual “story,” in the 90s horror began attracting intelligent and clever bona-fide filmmakers once again; Rob Reiner crafted Misery, Brian De Palma returned to his roots with Raising Cain, and Francis Ford Coppola sank his teeth into Bram Stoker’s Dracula. Each one of these directors elevated horror to more than schlock—they elevated the genre back to a sense of class. But then, right smack dab in the middle of this decade came a movie which was  exasperatingly grimy, ugly and classy. That movie is David Fincher’s Se7en.

Not since the original Texas Chainsaw Massacre has a movie woven murderous sadism and technical skill together so effectively. What’s most remarkable about Se7en is that it’s not even a horror film—it’s a detective thriller; one in which the movie’s inventive, grisly murders all happen off-screen. Despite this, Se7en earns every one of its screams even as the killer himself doesn’t show up until the movie’s final 20 minutes (and WOW, what a heart-stopping final 20 minutes it is!). I can’t think of a more mind-tickling ending constructed for a movie during that decade. There is more atmospheric suspense in Se7en than in the 1000 other movies made since then which attempted to copy it (Taking Lives, Along Came a Spider, Murder By Numbers). Se7en is time capsule worthy.

Imagine Dario Argento’s Suspira and Roman Polanski’s Repulsion mixed together and then you might have Black Swan; the popular skin-crawler from Darren Aronofsky. Natalie Portman has never appeared more fragile (in size or in emotional state) as she does in this chiller set in the world of New York city’s metropolitan Ballet. What is real and what is imagined? It’s hard to tell in this Gothic chiller.

Natalie Portman is Nina Sayers, a talented but emotionally disturbed ballerina embarking on the performance of her lifetime—undertaking the starring role of Tchaikovsky’s Swan Lake while dealing with an overbearing stage mother (Barbara Hershey), a competitive, sexually frank newcomer come to shake up her ballet troupe (Mila Kunis) and Thomas (Vincent Cassel), her show director, who pushes her to unleash her inner demon in order to fully embody the ballet’s Black Swan. Ultimately, Nina unleashes more than that as hallucinations of self-harm and jealous murderous rages consume her state-of-being. By the time Nina has found her inner dark swan, it has wrecked her sanity possibly beyond all repair.

Black Swan is an artful, disarming and menacing psychological thriller with a main character who culls our empathy and revulsion at the same time. Portman’s Nina is a damaged figure much like Catherine Deneauve’s Carol in Repulsion or the later Betty in David Lynch’s Mulholland Drive in that each character, already in an emotionally fragile place to begin with, is driven by repressed desires which when brought to the surface, leads to self-destruction.

Black Swan is one of the boldest and stunning horror thrillers in recent years.