The seventh episode of Kidding was a prime example of how a well-written show can take you on an emotional journey, all in a short amount of time; that no matter how much television or film we’ve watched, good writing can still surprise us. Every week after the latest episode of Kidding, I find myself impressed with how much they do in 30 minutes and how I can’t wait for the next episode. This week was no different. Let’s get into it, shall we?

The biggest story thread this week started with Jeff and his estranged wife Jill sitting together in the hospital, having perhaps the best conversation we’ve seen them have. Jeff spoke openly about his feelings for Vivian and acknowledged what he liked about Peter, Jill’s new boyfriend. The conversation was healthy, and Judy Greer’s body language really sold her feelings here. Her character, Jill, seemed impressed with how well Jeff was handling them discussing their next relationships post their marriage, but also with a hint of remembering why she loved Jeff to begin with. Is there any future tension between Mr. and Mrs. Pickles? That remains to be seen.

Vivian left her doctor’s appointment and told Jeff ( and Jill ) that she was in remission, something that nobody saw coming. Now it was Jim Carrey’s turn to have his body language tell the story. As he hugged Vivian, you could see that Jeff didn’t know how to react. Of course, he was happy that she was going to live, but he’d already written this story out in his mind. What does a surviving Vivian mean for Jeff, his future, and his family? We’re about to find out as Jeff invites not only Vivian but Jill and Peter to Thanksgiving dinner later that week.

Thanksgiving dinner was a first for this series, both in terms of having virtually the entire cast together but also showing them happy, together. Jeff and Peter had a bonding moment, and Seb had a bonding moment with Mr. Pickles-san, the Japanese man who recently took over the role of Mr. Pickles on the Japanese version of the show. Mr. Pickles-san is in the US to spend time with Jeff to learn the role better, and we’ll be discussing him more later.

During casual conversation, the topic of Vivian’s remission came up and Jeff told the family of the vacation idea Vivian had. The family, all in a celebratory mood, began including themselves in Vivian’s plans, with Jeff leading the family vacation charge. Finally, Vivian broke the good vibes running through the room by telling everyone they would not be joining her, and neither would Jeff. She proceeded to tell Jeff that she associates him with death and cancer, and while she appreciates him and that he saved her, she has to move on. In most other shows, this probably would’ve dragged out a little longer, and we certainly wouldn’t have seen the next scene. Jill screaming profanities at Vivian, and getting the entire family to join in on what was almost a surreal moment of a woman who just found out she was going to live being cursed out of a house on holiday. The family knew Jeff and his struggles and were defensive over what this would mean to him. They knew Jeff was recovering and now what would that look like?

To round out the Jeff portion of this week, the final scene saw the meltdown we’ve all been waiting for. Jeff finally lost his cool, destroying an office backstage. Flipping furniture, and with limbs wailing around, in the most symbolic moment, Jeff saw himself on a TV screen and destroyed it. The issues with identity that have been well referenced all season long came to a head here as Jeff destroyed his own image. What does this mean for our beloved Mr. Pickles? Is this him resenting the commercial direction the show is moving in? (One of the other subplots this week was about the Mr. Pickles doll hitting stores and causing holiday shopping madness). Is Jeff finally having the internal debate about where Mr. Pickles ends and where Jeff begins? Could “saving” Vivian, but not being able to save his deceased son be his snapping point? As we draw closer to the end of the first season, we finally see a fully unraveled Mr. Pickles. What does it look like for him to pick up the pieces again? 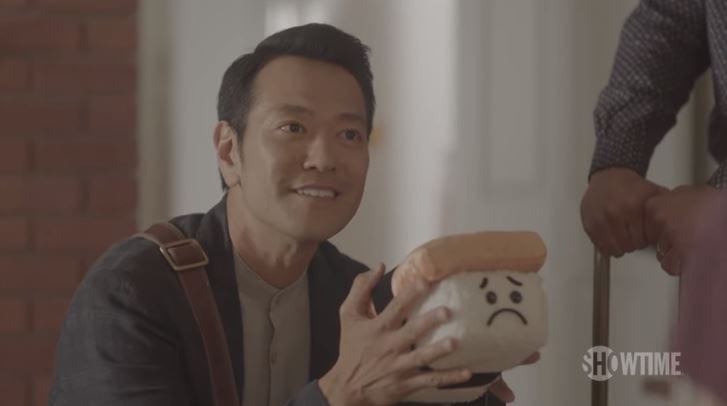 In the other major story arc of the week, Deidre played house guest to Mr. Pickles-san, due to Jeff’s less than inviting living situation. Prior to his arrival, Scott and Deidre had a conversation where without saying the actual words, Scott told his wife he was done with men and was recommitting to her, and she told him it was OK to be gay. They both tried to be what they thought the other wanted them to be, which Deidre would later vocalize is a pattern of hers. Then the house guest arrived.

Perhaps Deidre shares her husband Scott’s fondness of Asian men, as pretty much from moment one Deidre was drawn to him. Their dynamic at first seemed to be more about her expressing her feelings and Mr. Pickles-san, through broken English, trying to be there for her. In a later scene, the sexual overtones were taken to a whole new level as Mr. Pickles-san, through puppets and a thin sheet, told a story of how the woman in question would need to make the first move sexually to begin healing herself truly. Enter Scott…and the visual of Mr. Pickles-san having one puppet on each hand and the third puppet was covering…another body part.  This is another brilliant example of a scene in this series going from a genuine place about Deidre needing to take matters into her own hands before taking a sharp left turn, resulting in a puppet covering a penis. Scott’s reaction—complete surprise—was priceless. Will the wall of denial be shattered by the brief stay of Mr. Pickles-san? Or will Deidre and Scott resume old habits and dynamics between them? Call it a hunch, but I think Mr. Pickles saved them here. It’s time for both of them to be happy, and this may be what does the trick.