Ray Donovan returns for its sixth season with the premiere episode, “Staten Island, Part 1,” still whispering the maxim of season five: Ray is a man adrift. Literally. Liev Schreiber’s titular character was last seen jumping off a building and into the East River, chasing an apparition of his deceased wife, Abby, to the bottom of the riverbed. It felt like a fever dream, but it wasn’t.

The opening moments of season six pick up right where we left off. New York City policeman Sean “Mac” McGrath (Domenick Lombardozzi) is finishing up a crack arrest, stuffing a perp named Fetu into the back of his car when he sees Ray fall into the water. Mac rushes over to save this stranger’s life. Mac pulls Ray to the shore and gives him CPR; Ray’s lungs gasp for air. Just like a Donovan, Ray isn’t going down without a fight and punches Mac in the face, and heads back into the water to reunite with his dear Abby. There’s nothing left for him in this life. Mac breaks out a billy baton and puts Ray down for the count, shoving him in the back of his cop car with the crack dealer.

Bloodied and dazed, Ray watches the lights of Manhattan pass overhead while Fetu wonders why they are being taken to Staten Island. Remember this. Ray is booked and then immediately bailed out by Hollywood mogul Samantha Winslow (Susan Sarandon). Samantha previously hired Ray to kill her rival, producer Doug Landry. Samantha wants to keep Ray close, and perhaps curry favor down the line when she needs her next mess cleaned up.

Ray heads out of jail and Lena (Katherine Moenning) is waiting on him. A quick sigh of relief—with the show supplanted from Los Angeles to New York, it was entirely unclear if Ray’s wise ass gopher would be hanging around. Ray continues speaking in muted fragments, refusing to return to Los Angles, refusing to string a sentence together with more than four words. He just tried to kill himself and doesn’t want to be Samantha’s fixer or Lena’s boss. Instead of jumping off another building, Ray heads to the bar with a scarred face, bandaged hand, and tattered suit.

Mac tails Ray to the bar, demanding to know who bailed Ray out. Ray doesn’t want to get friendly, and heads out the door. Ray catches some street graffiti: Suicide Sisters. A pavlovian flashback to the pilot episode where Ray’s sister killed herself by jumping off a building. He goes back to talk to Mac over a glass of whiskey, and Ray’s new friend keeps asking questions, keeps talking. And talking. If there’s one thing Domenick Lombardozzi has done effectively throughout his screen career, it is to talk until no words are left. Ray and Mac keep toasting. Outside of his family, Ray has hardly cozied up to any peripheral male, and for some reason lets this loudmouth get closer and closer.

Mac’s ex-wife tracks him to the bar to give him whatfer. He forgot to take their son to school, and they take it outside for an argument. Before too long, Mac returns to the bar and grabs a hockey stick, and proceeds to rumble with a number of policemen and firemen. Broken glass, everywhere! The world continues spinning around Ray while he stares off into a void. Instead of climbing into a taxi headed nowhere, Ray jumps into the fray to defend Mac. They both get their asses kicked, and laying face down on the concrete, their eyes meet. They are enjoying this. 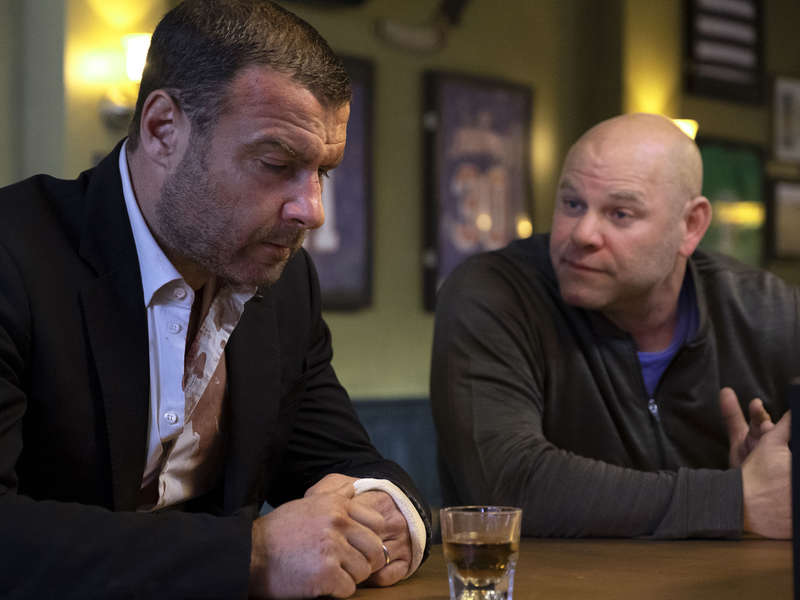 Ray heads home with Mac, and the drinking continues. Mac keeps yakking away, and for some reason, Ray sits down on the couch and hears him out. Ray blurts out that his wife has been dead a year, reminding the audience that season five was a violent vortex of time, and that Abby’s death has been doing a number on him ever since. As the comfortable silences settle between Ray and Mac, I caught myself wandering out of the moment: “Where the hell is this going? What does Mac want with Ray? To take advantage of him and his connections? To play Batman and Robin?”

We’ll keep guessing into next week.

Ray and Mac’s slumber party turns into an endless summer. In the next scene, Ray is sitting on the same couch, a new man. The scars on his face have healed, and a bushy beard has grown in. The black suit has been swapped for a flannel jacket, and a New York Yankees cap is pulled down over his eyes. Shades of Dexter Morgan-gone-lumberjack. Ray is removed from everything and everyone he knew, fixing motorbikes at Mac’s house. A reporter drops by and is working on an article about racial profiling.

Fetu, the crack dealer, is making a stir. The fact that Mac drove Fetu and Ray out of Manhattan to another precinct needs to be concealed, and as an observant viewer, I’m entirely unsure why this matters. Ray couriers five-thousand dollars of Mac’s money to Fetu to keep him quiet, and Ray promptly gets his ass kicked in the process. Is Mac a misunderstood agent of the law, or a scumbag who knows Ray is a good guy to have around?

Out of ego, boredom, or hubris, Ray accepts Samantha’s offer: an upstart politician named Anita Novak (Lola Glaudini) is running for mayor of New York. An explicit video is in the hands of a former blind date from hell, and Ray must seek and destroy. Anita is cultured, attractive, and vulnerable. The attraction and intrigue between Ray and Anita is palpable—the question isn’t if Ray will sleep with her, it is when. This episode? Too soon, even by Ray’s standards. And just like that, Ray is gainfully employed. Before Ray can get his hands on the deviant-at-large, Anita tracks him down to his loft and kills him. Ray walks into the scene, and in the eyes of Liev Schreiber, a plan to fix it all congeals. 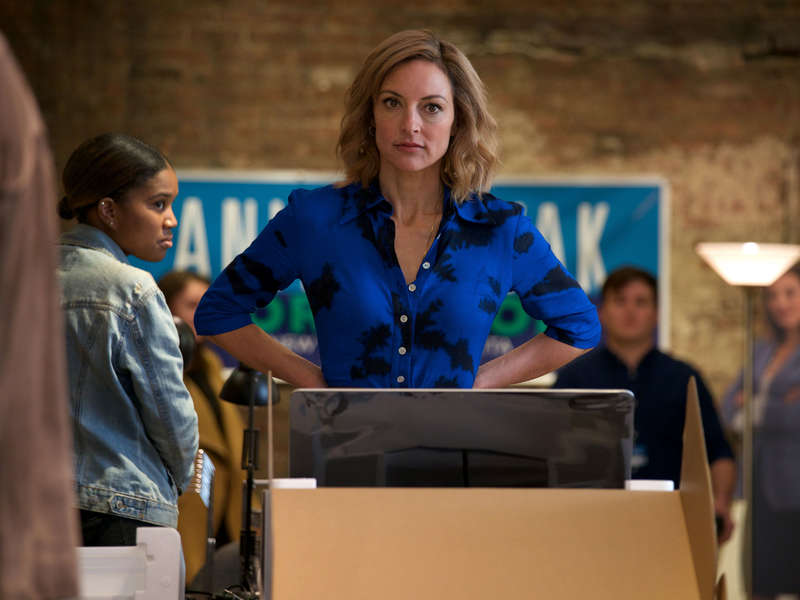 The rest of Ray’s former life is closing in on him. Mac’s son is being picked on, so Ray drops by Terry’s boxing gym to reconnect and set up a sparring session. Ray and Terry are platonic but dependable brothers. Anything for the family. All is well, until Ray’s estranged daughter Bridget shows up. She’s dating a boxer, and Ray doesn’t even hug her after a series of awkward pauses and fumbled gestures. The look on Bridget’s face says it all. She misses her father, and only has this new man in her life to cling to.

Back in the Sunshine State, things are the same as they ever were. Bunchy Donovan is still a trainwreck. Portrayed by Dash Mihok, Bunchy is the one Donovan brother who gets to wear his heart on his sleeve, sobbing and emoting at every turn. While everyone else holds stiff upper lips and sombre attitudes, he is the needy, mercurial little brother. A brief glimpse of Bunchy lets us know he is still in-over-his-head, losing a custody battle for his young daughter and nearly breaking down outside the court room.

Mickey Donovan has no problems reintegrating into prison life. He has naked pictures of women pinned up on his cell wall, and turns on the charm to convince a guard to give him a forbidden bed pan. During free time, Mickey collects cigarette butts off the ground and plays dominoes. The news from a nearby television pierces his ear drums: movie star Jay White (Brian White) is making a new movie. The same movie that Mickey wrote last season. Mickey was cut out of the deal, and now he is even more pissed off. Mickey wants more money, he wants his name on the script, and because he’s a racist prick, he doesn’t want a black man starring in his film. 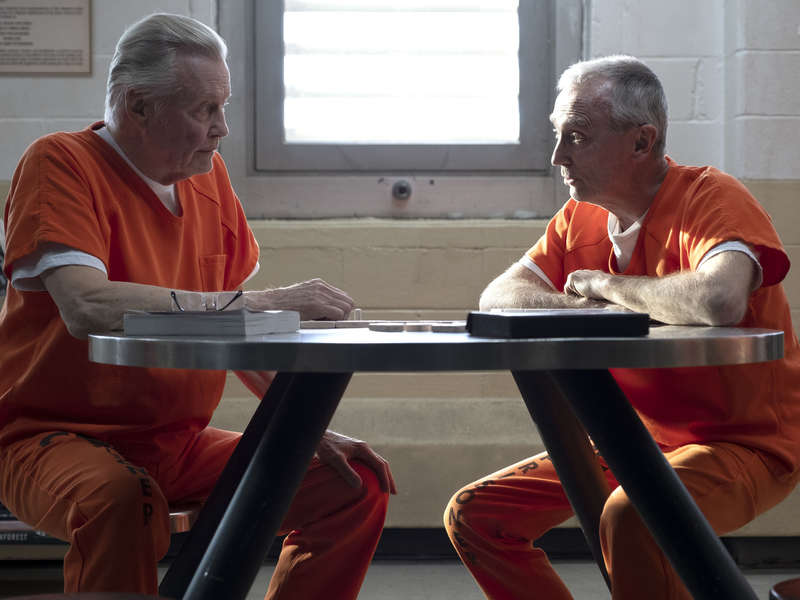 Meanwhile, Darryl Donovan (Pooch Hall) continues his Hollywood ascent, hanging out with Jay, who is snorting mounds of coke and trying on ridiculous pimp outfits for Mickey’s movie they are about to make. They laugh, for now. It turns out Mickey was saving those cigarette butts for a rainy day. He dumps his stash in the bed pan and mixes it with water, forming one of the nastiest looking substances imaginable. Mickey gulps it all down, then proceeds to run in place, doing push-ups, until he collapses. The old bastard is faking a heart attack, just so he can get out of prison and exact revenge on Jay and his own son, Darryl. It ain’t gonna be pretty.

At the beginning of “Staten Island, Part 1,” Ray was ready to leave everything behind: fatherhood, a career, the booze, the philandering. And yet, Mac refused to let him go easy into the night. Perhaps Ray feels he owes Mac for saving his life, and perhaps Mac is a crooked cop taking advantage of Ray. With Ray’s wife Abby wiped from the chessboard of the show, Ray Donovan is taking a huge risk by inviting an outsider like Mac to ride shotgun. I am keen on seeing where this all goes next week in “Staten Island, Part 2,” and how the chemistry between Schreiber and Lombardozzi develops throughout the season.

Somewhere, a black Mercedes sits neglected. How long can Ray Donovan resist popping the trunk open and pulling out a Louisville Slugger? Tune in next week.