(Please note this only looks at the first movie, without the context of the sequels)

The opening of Halloween is brilliant in its simplicity. What seems to be an establishing shot of the house quickly becomes a first-person view of the horrors about to take place. We do not merely watch the scene unfold but experience it as the camera takes on the role of six-year-old Michael Myers brutally stabbing his sister.

This opening long shot is the only scene in the movie explicitly shown from a first-person perspective. However, the scene does more than simply set up the unyielding, patient terror that is Michael Myers. The utilization of a first-person perspective sets into the viewer’s mind the idea of the camera as a character, one that lives within the world of the movie. It allows it to transcend from its traditional role of documentation to one of participation.

When we follow Michael, the camera is methodical and moves without hurry. Michael moves in and out of frame with the same persistent drive creating a sense of unity between the lens and the character. Until Michael appears within the scene, it becomes hard to differentiate between whether the camera is playing Michael’s role again or simply embodying his essence, watching in the same unflinching manner.

While we follow Laurie the camera serves the role of a fourth friend, remaining close to Laurie, Annie, and Lynda as they continue with their daily lives. The combination of tight shots and match cuts create a sense of comradery with these characters as we begin to feel that we are in the same moment, witnessing the events as they unfold as if we ourselves are part of the action. 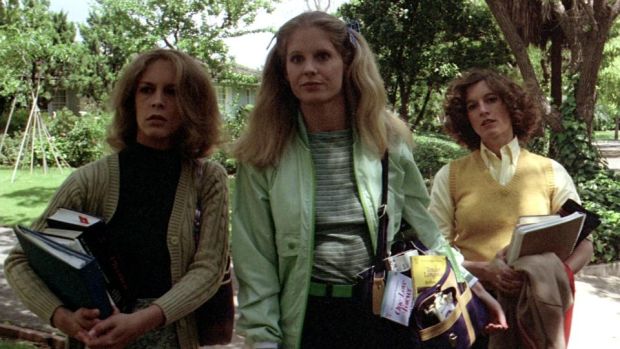 There is, of course, one more prominent character in the film: Loomis.

Halloween asks aloud, “What is the Boogeyman?” The movie responds to this question in a number of ways. Tommy explains that the Boogeyman is unkillable, while Laurie offers that it can only come out on Halloween night. The Boogeyman quickly takes on a life of its own within the movie, filling in its own lore and mythos as the film progresses. Halloween can create whatever rules it wants for the Boogeyman whenever it wants. Why?

Because the Boogeyman doesn’t exist.

That’s not to say Michael Myers doesn’t exist, or that he didn’t kill the characters within the film. The movie presents proof of his actions through the aforementioned Loomis. The camera works with Loomis in the same way it does in conventional movies. Movies where the characters are cut and dry. Where there is no subterfuge in the angles, creating lingering thoughts of distrust and suspicion. Movies of fact. And that is what Loomis is. The factually grounded character, the one who understands Michael, understands his modus operandi. Loomis operates on the level and, with one exception, witnesses only things that are feasible for the average human. 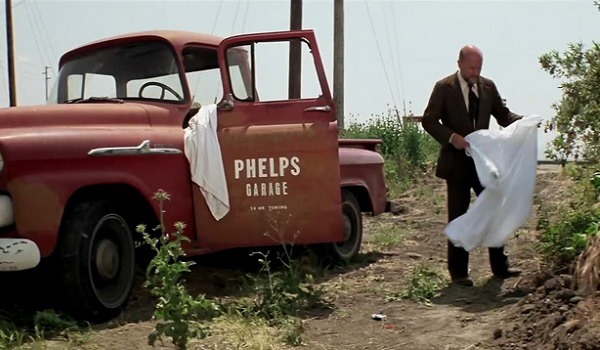 So what of Laurie and her “friend,” the camera? Are they not a reliable narrator? Scenes like this seem to say not: 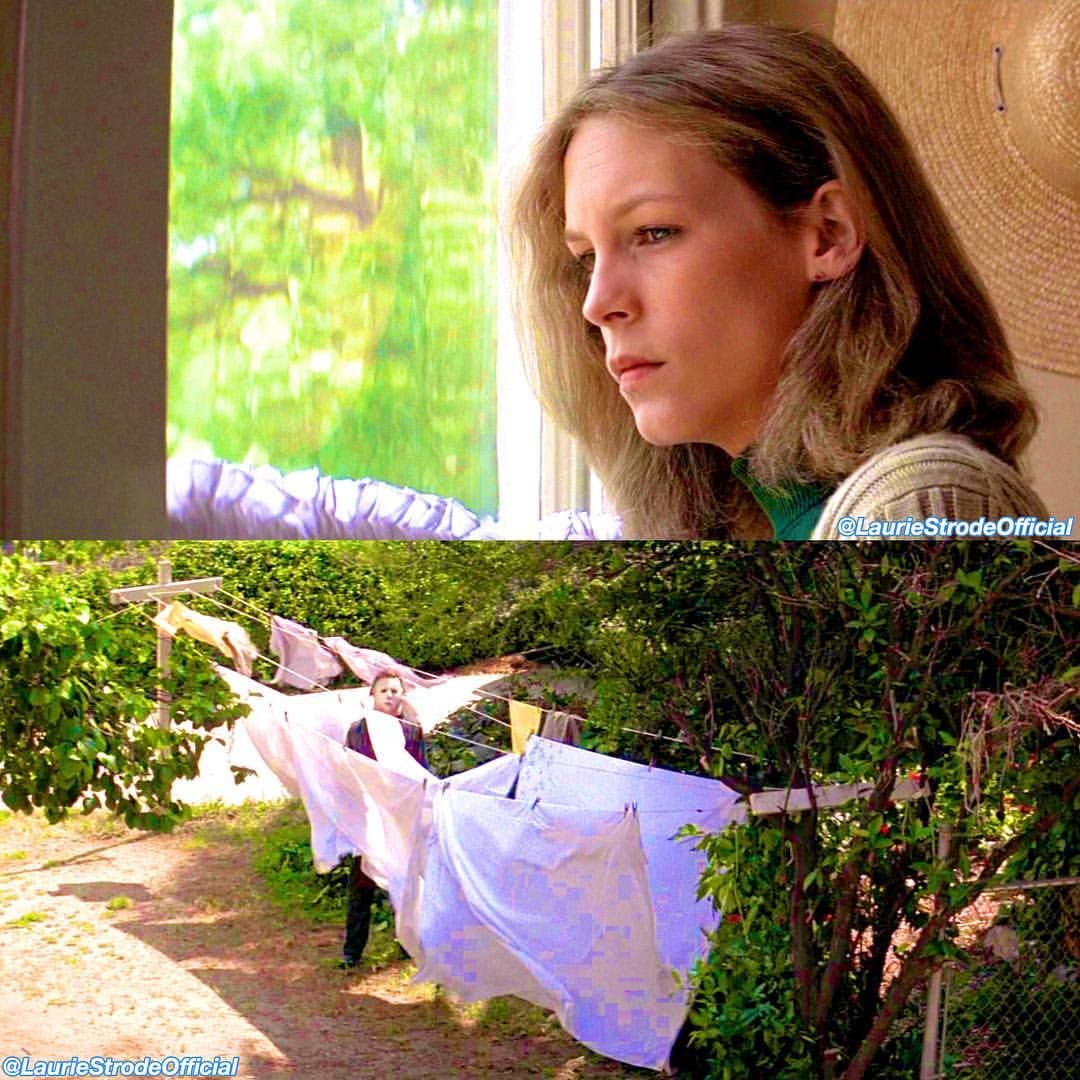 Note that Laurie never looks away from the window. Only the camera pulls back to focus on Laurie’s reaction, and in that time Michael vanishes. In these moments, the camera prescribes a supernatural element to Michael’s character, one that Laurie could easily dispute but appears not to, instead becoming consumed with the fear of that which they don’t understand.

Laurie, and by extension the surrogate friend in the form of the camera, begins the descent into fear with Michael’s car disappearing. The next time she sees him is with a group of friends as one shouts rude remarks before the car screeches to a halt. From there, the fear grows within her and she starts to see a strange man everywhere, one that disappears quicker than possible. The camera will often reveal that nothing is there, seeming to chide her in a way similar to that of her friends.

It is important to notice that in the above example of Laurie looking out the window, she never looks away. Instead, only the camera does.

The human mind can be tricky. A single idea can set off a chain of events that compounds upon itself until it becomes all you see. So, the simple idea that the Myers house is haunted (which Tommy suggests long before any strangeness begins) is the perfect catalyst to send the brain into quietly seeing small things that are only there until you focus on them, each one building off the last as new ideas of the Boogeyman—a being that lives in the shadows of our minds—are added on.

As the night goes on, Laurie and the camera/friend/audience continue to build up the idea of the Boogeyman. What starts as a bad night slowly becomes a nightmare, orchestrated by a nigh-unkillable evil, one that seems to exist beyond the realm of reality. Slowly but surely, details are added on to Michael’s mythos to make him more and more terrifying.

The chronology of the night is incredibly important at this point, as it serves to illustrate how Laurie’s fear-filled mind continues to apply new information to her situation. After Laurie find her friends murdered across the street, she returns to Tommy’s house, pursued by Michael. Once inside, the two struggle before she manages to stab him with a knitting needle, causing him to collapse. She runs upstairs to the children she is watching to inform them that she has killed the Boogeyman. One responds that the Boogeyman cannot be killed and at that moment Michael returns.

The key point from that timeline is that Michael only returns after Laurie is told that he cannot be killed. And so, Laurie/the camera assume that he cannot be killed when she simply didn’t succeed in killing him with the needle. However, the reason he lives is not important, merely that he does still live so that this new bit of information—be it fact or fiction—can be applied to the character.

And thus, everything ascribed to the Boogeyman becomes an element of Michael. They are one and the same, their realities and legends unified into a terror beyond the mortal man.

A few questions remain, however. The big one being, “Doesn’t Loomis show up and shoot Michael, to no effect? Doesn’t that prove that he is the monster Laurie thinks him to be?”

In theory, yes. But Laurie’s position does not present her the opportunity to confirm this. When Loomis comes in, guns blazing, Laurie is left watching the events unfold from a vantage that would not enable her to see the final fate of Michael once he falls out the window. In those moments, she is left to speculate his fate and, in a night where she has decided she is fighting an unkillable monster, why should she not assume that Michael got up and walked away? She never sees the body, nor does Loomis say anything before the movie ends, so it is entirely within reason that, to her, Michael remains alive.

Earlier, however, I did establish that Loomis is the straight man. The character we can trust to not mislead. So, why should we take this scene as anything other than fact? I argue that it is from the clash of characters and cameras. We have been focused on Laurie as the main character of the past few scenes and the addition of Loomis did little to change this. The story at this point is still told from her point of view, still seeing her as the protagonist of the scene. In this moment, Loomis features more as a Deus Ex Machina, a tool used to rescue our trapped heroine, than a character unto himself. In those moments, who is to say what Laurie is truly seeing? Watching the back of Loomis’ head rise up, she could be seeing fear when in reality, it is relief that the nightmare of Michael is over.

The world has a way of sensationalizing events. The mundane can quickly become muddled. The natural becomes supernatural. The human killer becomes a god of terror.

The camera tells three stories throughout the course of Halloween. The first is of Laurie, as she becomes consumed with fear and ideas from the day begin to mix with reality. The second is that of Loomis, as he struggles to recover a patient he knows all too well. The final is of Michael himself, of the patient, driven character he is, looking only to kill again.

This leaves only the final question of, “What is the truth of Halloween?”

And to answer honestly, I do not believe there is one. Laurie is an unreliable character, one that has become consumed by her own fear. Michael is the root of the problem and thus unaware of the other side, unable to truly relay a clear picture. Loomis, the one character who may be able to provide some answers, is notably absent from most of the central conflict. And this is where the idea of myth and truth clash.

Laurie’s account of the night becomes the legend, the story told from child to child of the night Michael Myers got loose. Loomis would have the truth of the night, but with swaths of the tale missing. Combining the two accounts becomes like that of a dramatized retelling. Accuracy can be found within the story, but it is bolstered by fictitious narrative from those too close to the action.

The camera, our viewpoint, the character of the audience, captures the entirety of the events. But the truth of the story is only as strong as its weakest link.