It didn’t take Robert Redford to announce his storied career (spanning nearly 60 years) as coming to a close with the 2018 feature by David Lowery, The Old Man & the Gun, to ensure that I saw the film. As a Redford devotee, nothing could have kept me from seeing him in a new project, though the urgency was indeed intensified knowing that this would reportedly be his last filmed appearance. I’m still in denial over the retirement announcement and can only hope that like Clint Eastwood, who has said before that he would no longer appear on-screen, we will still see him from time to time. It would be hard to begrudge Robert Redford if this truly is the end of his acting credits, beginning in television in 1960, as he’s acted steadily through the years racking up 79 acting credits while also directing nine feature films (among them one of my favorite Best Picture winners, Ordinary People). Redford has been accused of being a “pretty boy” actor who dabbled in directing and was unfairly rewarded for it, but I dare those same people to find a more heartbreaking depiction of the loss of a child and the family left to cope with the personal tragedy than the 1980 Best Picture winner. Instead of belittling his directing credits, Redford should be celebrated among the other successful actor/directors that are equally as impressive behind the camera as they are in front of it. 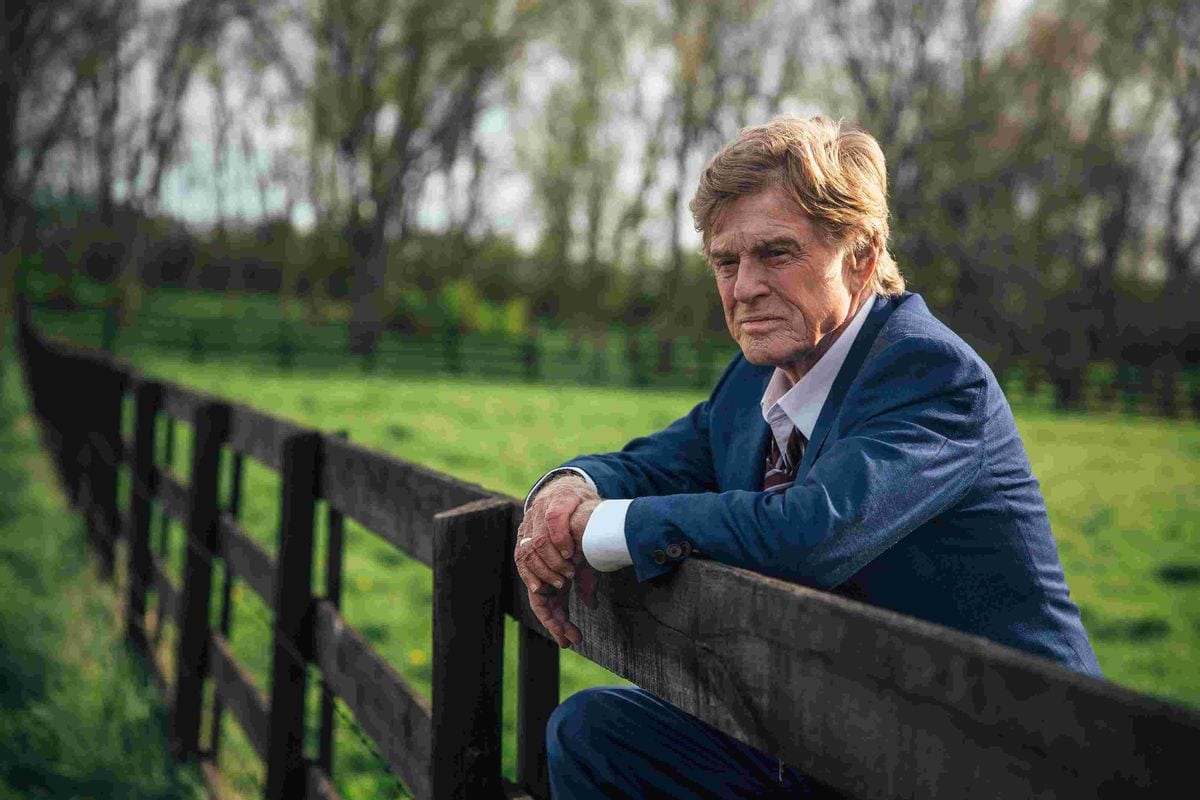 I’ve made no secret of my hyperfocus on age-positivity and its depiction in the cinema, so to say I was uneasy about the title of Robert Redford’s final film and its subtle ageism would be an understatement. I was hopeful that the title, The Old Man & the Gun, would take the false narrative of the restrictions often assumed of the aged and subvert them with a positive spin. Sadly, those hopes were not realized with both implicit and explicit ageism filling the entire runtime of the film. The film tells the story of Forrest Tucker (Robert Redford), a happy and charismatic 16-time prison escapee who cannot keep himself from robbing banks once he’s on the outside. Set in 1981, the film highlights Tucker and his equally senior associates and their congenial method of robbing banks undetected. Throughout his crime spree, Tucker falls in love with a horse-loving widow, Jewel (Sissy Spacek), from whom he keeps his criminal activities hidden. While courting Jewel and robbing banks, Tucker catches the attention of police officer, John Hunt (Casey Affleck), who happened to be inside one of the banks Tucker robbed without knowing what had happened until he already left. A cat-and-mouse chase ensues with Hunt eager to catch the smiling robber who taunts him and regain some of his professional dignity.

Tucker and his associates are dubbed the “over the hill gang” with a news report referring to the men as “old men that rob banks” while stating that they hope the police “catch up with them before time does.” Hunt soon learns that despite armed robbery, almost zero police interest has been given to catching these men with one police officer telling him, “we don’t need to waste our time with a bunch of old folks.” Perhaps even Hunt wouldn’t have been interested in pursuing them had he not found himself involved in a crime they had committed. It would have added an absorbing layer to the film had Hunt’s character been further explored, or perhaps if his fractured masculinity had been examined when he was forced to give up the case on which he had made the most advancements onto the FBI, but sadly, it wasn’t. Casey Affleck wasn’t given much to do throughout the film, at all. Other than their prior working relationship in Lowery’s 2017 film, A Ghost Story, I can think of no other reason why Casey Affleck was cast as Hunt, as nearly any actor could have played his part. What makes his underuse especially disappointing is knowing what he is capable of.

The 2016 film, Manchester by the Sea, my favorite film of that year, saw Casey Affleck in the deeply wounded role of a man bobbing through life like a bottle in the ocean like only he could have played it. Seeing the depth he can bring to a performance and then seeing him so underutilized is an intense letdown. Similarly, Sissy Spacek was given a flat character to play, whose only role was to have ageist conversations with Robert Redford’s character about their impending deaths. Both of them did what they could with what they were given; I wish they would have been trusted with much more. I left The Old Man & the Gun questioning both Lowery’s skill as a director of actors, as well as a disappointment by his flatly safe direction of the film at large. There were several moments that even a passive viewer of The Old Man & the Gun could see coming from a mile away, which seems to further an assumption I’ve made through my viewing of Lowery’s work that he revels in the ham-fisted. 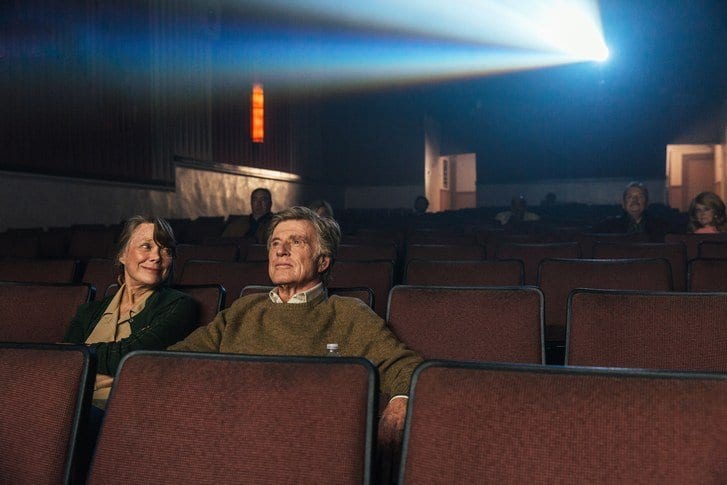 Several ageist tropes continue to pop up in cinema that are as disappointing as they are tired and were unfortunately littered throughout The Old Man & the Gun. A common theme in movies starring those 60+ is the exaggerated movement of them going to put glasses on to read something, or for characters on-screen to make jokes about the AARP and hearing aids, all of which Lowery indulges in The Old Man & the Gun. Another common theme in movies in which seniors play a vital role is the discussions that take place when discussing their children and the accepted assumption that the senior character needs help living their life or needs to move into an assisted living facility. The only time Jewel discusses her children with Forrest is when she’s lamenting that her kids think she lives on too much land and their insistence that she needs help maintaining her property because it is “too much for her.” Even the younger characters can’t escape the ever-present ageism throughout the film. When his department celebrates Hunt’s birthday, one of his colleague’s remarks “the big 4-0, it’s all downhill from here.” Not given nearly the attention that sexism in cinema is given, ageism is so flippantly and often used in movies that it’s becoming a disgustingly common disregard toward an entire subset of the population.

The Old Man & the Gun was not without its positive moments, though. Often in films where two older cast members share a scene, close-ups are usually avoided as a means to shield the audience from the wrinkles and time visible on the face of the elderly. The opening of the film is filled with close-ups of Redford, establishing his character and showing off his surprisingly cheerful disposition. Lowery knows what he had in Redford and let his natural charisma command the screen as only the veteran actor can. The fact that the love interest between the older leads was depicted on-screen instead of being ignored off-screen was a nice concession that doesn’t often take place in movies. It’s incredible for the human spirit to see that love doesn’t die once grey hairs start to emerge, and a commitment to illustrating such love is something that should be taken on by more filmmakers everywhere. 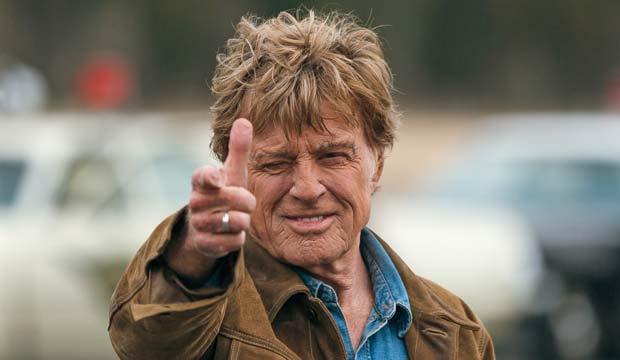 Forrest Tucker’s story is an interesting one and one that I’m glad to have seen fleshed out on the big screen, despite wanting more of it. The story of the man himself was a bit rushed through The Old Man & the Gun in favor of showing his bank robbery methods in repeated detail. As impressive as the unique robbery method was, I’m always in favor of seeing the human beings behind their deeds more than I am the deeds as it almost always makes for a richer story. What audiences did get from the film, though, is a professional entirely in their element. Just like Forrest himself, Robert Redford fills the screen with his essence that is so immensely charming that you don’t care all that much that you’re getting robbed of a complete movie. We’re so fortunate to be still able to enjoy an actor as magnificent as Robert Redford that watching him elevate everything he has been a part of for the last 58 years is the real gift anytime we get to see the legendary actor on-screen.