Ray Donovan — the show and its titular character — have been in disarray so far this sixth season. Ray is half the man he used to be. His father and primary antagonist, Mickey, has been on lockdown or in a hospital bed. The two driving forces of the series have been aimless, and all the supporting characters have stood shuffling in the middle. The first two episodes of season six haven’t been bad by any means, but they’ve made me restless. This week’s episode, “He Be Tight. He Be Mean.” needed to grab me this week, shake me, and remind me why I want to stick around for the long haul.

We last saw Ray walking into oncoming Manhattan traffic after hearing the news that his father, Mickey, is out of jail and officially on the run. Ray was in fact headed to the bar to meet up with his new and first-ever bestie, Sean “Mac” McGrath. Ray pours a glass of whiskey down his throat, right as Mac ensures Ray that last week’s double murder cover-up is on ice. Ray has already moved on to the next crisis, and needs to know if Mac has any contacts in the FBI that can put the squeeze on Mickey. Mac nods his head. Anything for Ray.

Bunchy and Mickey are fleeing from the cops. Whenever Bunchy is in deep shit, he doubles down. This time, he goes to kidnap his own daughter and rectify the custody ruling in this season’s premiere. The cops are already looking for the convicted killer in Bunchy’s passenger seat, so why not throw an Amber Alert on top?

Ray staggers out of the bar and stands on a rainy sidewalk. He looks up at the sky in a moment of pensive clarity, letting the water runs down his woolly face. Ray pulls out his cell and calls Samantha. He’s going to take her up on last week’s offer of steady employment. He wants an apartment, an office, and a decent car. Oh, and his assistant Lena will have to be relocated from LA to Manhattan. YAS.

Right as Bunchy ducks into the car with his hostage, erm, daughter, Nas’ “N.Y. State of Mind” hits, and every Ray Donovan fan gets what they’ve been waiting on this season. Ray walks into Terry’s gym, looking to get back into proper ass-kicking shape. As Ray beats up on the punching bags, Mickey and Bunchy steal a car in Arizona and head East. Mickey is dying his hair, while a clean-shaven Ray is jumping rope and sweating his ass off. As the song wraps up, some time has passed and Ray is back in his black suit, clipping a shiny new watch on his wrist.

Everything in its right place.

Bridget walks into Ray’s new apartment and scoffs at his new digs. Bridget is making moves, looking toward the future and a new internship to get caught up on her misadventures from last season. Ray and Bridget trade asides. He wants to know if Smitty has a job yet, and Bridget fires back saying that she can take care of her own damn self, and Smitty too, if she chooses.

Lena is staking out a condominium, which Ray heads into. An attractive blonde in a bathrobe answers the door. Ray gives her an envelope of money, and procures a video file of the woman screwing someone we don’t know. Turns out that this girl is Justine, a former flame of Lena’s. In the funniest scene of the episode, Ray sits in his new black Cadillac sedan with Lena, and remarks not once, but twice, how “nice” of a girl Justine seems. We share Lena’s befuddlement. Ray gives Lena a wad of cash, suggesting she take Justine to a nice dinner. Lena stares at him: “Who the fuck are you?” 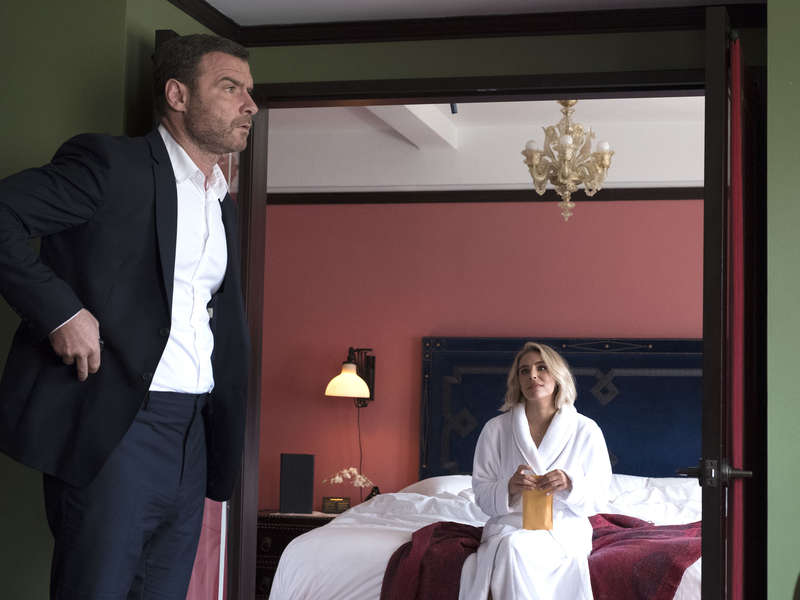 Perhaps Mac did more than save Ray’s life. Maybe he reinstalled a direct line to Ray’s humanity.

Mickey and Bunchy drive into New York, taking in the skyline. With his tiny, impressionable granddaughter three feet away, Mickey remarks, “I love this fucking town.” Father and son show up at the house of Aunt Sandy, a rat-tailed female version of Mickey. Lewd, crude, rode hard, put up wet. Bunchy seems sceptical, but Mickey has faith in her for some reason.

Right as I was wondering why Mickey would drive across the country before exacting proper revenge on Darryl and his A-list actor buddy Jay White in Los Angeles, Darryl pulls up to a film set in Manhattan. Darryl is way in over his head, and immediately gets chewed out by the director. Jay has been holed up in his trailer for the past three hours, skipping the filming schedule and snorting coke. Jay is a method actor, cradling an M-16 rifle and entirely inseparable from the black Rambo he is portraying. Darryl is the producer, not producing squat.

Ray reports to his new full-time boss, Samantha, and they watch Anita Novak’s latest appearance on a talk show. Anita is ten points down in the latest mayoral poll, and we can all assume that the video with Justine earlier is going to help change that circumstance. (One small gripe – Samantha’s studio is conveniently housing Darryl and Jay White’s movie. A little too nice and neat of a story shortcut, but I digress). Ray next rings up Mac for an update on Mickey. The old dog is a ghost, and the feds have had no luck tracing him. Little does Ray know, Mickey is breathing down his neck, roaming around Chinatown in search of untraceable firearms.

We next see a Latino man recording a video selfie in a dark room. He is sweaty and distressed, claiming that he is fleeing to Mexico after a barrage of violent threats. He stops recording, then accepts an envelope of cash from Ray and Lena. You would guess this is connected to the video of Justine sleeping with that unknown man, and you’d be right. Ray tracks said man down, he is revealed as the moderator of the upcoming mayoral debate. The moderator must call on one Cesar Martinez (the man who recorded the selfie) for a question during the debate, or else say goodbye to his picture-perfect family life.

Score one for Ray Donovan.

The debate shenanigans go down as planned, Anita’s opponent is forever pegged as a bigoted xenophobe, and Anita assuredly gains a few points in the polls. Ray gets an update from Mac—Mickey and Bunchy were last seen in Akron, Ohio. Most importantly, headed East. Mickey next shows up to Darryl’s film set, blending in with a gang of curious, starstruck onlookers. Jay and Darryl emerge from the trailer and the crowd goes wild. Mickey stews, watching his son ride the elevator of life upward, right next to the asshole that stole his film script. For some truly hilarious salt in the wound, Mickey spots an aged actor dressed like him, complete with a Members Only jacket, aviators, and a toothpick. Someone asks the man if he’s playing anyone important, and the man remarks he’s just there to get shot by Jay’s character.

[Insert uproarious laughter, immediately cut short by the realization that someone is gonna pay.]

So far this season, Terry Donovan has idled. He’s helped Ray get back in shape and trained Mac’s young son to deter bullying. Finally, it looks like Terry has something to do. As he pounds away at a punching bag in his gym, a man gives him a flyer for an underground fight club. After a successful operation that has curbed the effects of his Parkinson’s Disease, Terry wants to live his life. He shows up at the fight club, and he can’t tear himself away from the thrill of combat.

Back at Aunt Sandy’s house, Sandy is dressed up as a nun for some Godforsaken reason. Bunchy looks on in quiet horror. The poor guy was once abused by a Catholic priest, and all these decades later, he is stuck in a room with Mother Superior Sandy sitting on a waterbed, making advances. Later, the plan entails Bunchy trying on a priest costume for an eventual escape via the Canadian border. Wherever this is going, I really do pity Bunchy more than anyone on this show.

Across town, Ray meets Anita for a glass of whiskey. On the television, Cesar’s selfie video is airing on the news. Anita is on to Samantha’s plan, totally not down with the crooked measures they are taking to help her win the election. She takes Ray to task, realizing he is just a hired gun. But damn good at what he does. The sexual chemistry is undeniable, and yet, Ray and Anita make it through another episode without giving into their obvious desires.

Darryl is losing his patience with Jay, and proceeds to dump allllll the cocaine down a toilet drain. After a skirmish with Jay, Daryl realizes that he will have to be an enabler as well as a producer to get this film made. Darryl makes nice with Jay by scoring more cocaine and kissing up to the A-lister. Nose candy goes up the bracket, and Darryl is learning one of Hollywood’s lessons, until this week’s “holy shit” moment: Mickey walks into the trailer with a loaded glock. Darryl looks as if he has just crapped himself, but rises to his feet like a man. Mickey pistol-whips them both.

Ray heads home from the bar and gives Bridget a call; He has landed her an internship with Anita’s campaign, and Bridget is unenthused. She wants to make her own way through this world. Ray has to hang up because Mac is on the other line, distraught that he wasn’t able to celebrate his son’s birthday because his ex-wife and her fireman boyfriend are being jerks. This means a fight is about to go down, and Ray and Mac get a second chance at beating up the same municipal employees from “Staten Island, Part 1.” Ray pops the trunk of his new Cadillac, grabs a ball bat, and reclaims the remainder of his former identity. 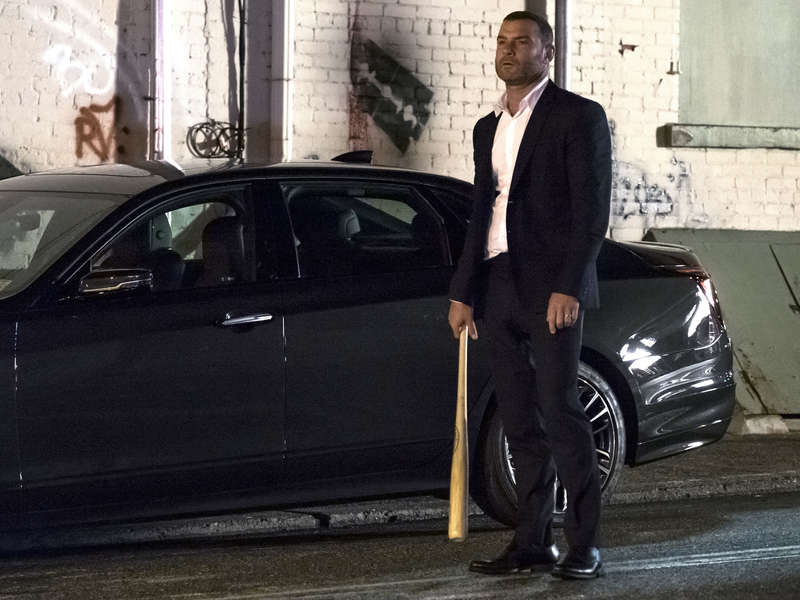 Although Ray is no longer in a fleece jacket and sleeping on Mac’s couch, he is still there for a friend in need. After leaving Mac’s house, Ray answers the phone. It’s Mickey: “Hello Ray-Ray.” Jay White is in his backseat, bloodied and bound, with Darryl nowhere in sight. DAMN.

I am not sure how Ray Donovan was able to pack in this much plot development within a span of fifty minutes, but “He Be Tight. He Be Mean.” didn’t disappoint. This was a rollercoaster of an episode that pulled negative and positive energies into much-needed equilibrium, all while successfully placing the first two hours of this season in a sharper context. Ray and Mickey both have their swagger back, and their eventual showdown should make for some compelling television.