I didn’t want last week’s episode of Ray Donovan to end, and I didn’t want this week’s installment, “Pudge,” to end either. Both episodes were white knuckle rides, making one question which nail-biting scene was actually going to be the last. As it goes with almost every episode of this series, things are going to get much worse for the characters before they get better.

Things pick up this week where they last left off, continuing Ray and Mickey’s phone call. Mickey has Jay White in his backseat, bloodied and bound. Ray must either fork over three million in cash along with three passports, or Jay dies. Why does Ray care if this man is killed? Because Jay is the star of Mister Lucky, a film that Ray’s boss, Samantha, ultimately owns. Sorry, but the writing here is too contained, too incestuous, too good to be true. And the show goes on.

Three million is nothing that Samantha can’t come up with overnight — along with the suggestion that Ray put a bullet in his own dad. Ray takes a duffle bag full of money (with a hidden tracker) to Bunchy at a nameless bar. The brothers haven’t seen each other in a while, and they continue the same conversation they’ve always had. (Hey, wait–what happened to the million dollars of settlement money that Bunchy has? And Abby’s bar in LA that Ray gave to Bunchy? Shrug.) Bunchy is a mess. Shoulders slumped, he looks like a boy trapped in a man’s body, entirely incapable of facing the big, bad world at large. Bunchy was the only one that was there for Mickey when he was “ill,” and only now does he realize he was being used all along. Ray hardly speaks. Liev Schreiber’s face does the talking. The judging. Bunchy is beyond help, and if he goes through with all of the following criminal offences, there is no turning back. Aiding and abetting a convicted murderer, kidnapping his own daughter, identity theft, extortion–Bunchy will be going away for life if he is caught. Ray’s look tells us he has no faith or hope left in his brother.

While Bunchy is procuring the ransom, Mickey has Jay White in Aunt Sandy’s living room at gunpoint. Mickey is pissed about everything. Jay turned his son against him, then stole his art. Then, he indicts Jay for writing in a character for Mister Lucky that looks just like him, only to be slaughtered like a pig. Mickey had written an homage to his brother (Aunt Sandy’s deceased husband) that was killed in the Vietnam War, and Jay had debased it all. Jon Voight’s two-minute tirade was one of my favorite moments of this episode, but what if it had been an extended Captain Koons-esque monologue of sorts? One can only imagine. Jay pisses his pants right as Mickey is about to execute him, then Bunchy walks in with the cash.

Meanwhile, Mac McGrath sits down for breakfast at a diner, when an undercover cop (Max Casella, yeah, that Max Casella who played Vinnie Delpino in Doogie Howser M.D.!) sits down across from him. The visitor lays out all of Mac’s hidden misdeeds. Mac has arrested three different perps who had drugs on them, and lo and behold, there is missing heroin and cocaine in the audit of evidence. It turns out Mac isn’t just supplying Ray drugs for staging crimes, he appears to be a serial liar and crooked cop. Has Mac just been ingratiating Ray for a rainy day when he really needs his help? Here’s the deal: Mac must wear a wire to get out of all this. But for incriminating whom? Ray? Someone else? Keen-eyed observers will remember Casella’s character staking out Anita Novak back in “Staten Island, Part 2.”

Something tells me the sh*t only gets deeper from here.

Speaking of… it is Bridget’s first day on the job as an intern with Anita Novak’s mayoral campaign. She kisses her fiancé, Smitty, and heads to work. After sharing brief pleasantries with Anita, Bridget passes out fliers to pedestrians, looking more bored, unfulfilled, and unenthused than anyone on this show has ever looked. Back at Bridget and Smitty’s love nest, a knock on the door. Three scary dudes bust in and kick Smitty’s ass and trash the apartment. The innocent, well-meaning, cancer-surviving Smitty is not what he seems. Also, those boxing lessons at Uncle Terry’s dojo didn’t appear to help him in a scrum. When Smitty isn’t working his sweet “aw shucks” angle with Bridget, he is a small-time drug runner who has been ripping off both customers, drug dealers, and loan sharks that report to an Albanian mob. Hopefully, Bridget’s internship turns into full-time employment soon, amirite?

Terry is in the gym, doing what he loves, teaching other people to fight. What he witnessed at the fight club last week hasn’t left him, and he can’t move on with his life until he gives fighting another chance. He shows back up at the fight club and is slated to take on “Polish Tony.” We pick up with the fight already in progress — Terry is covered in blood with one eye swollen all the way shut. The crowd is eating it up. With each horrific blow, human flesh reverberates off a skeleton in slo-mo. Right before Terry is put down for the count, he stages a ferocious comeback and annihilates his opponent. The mob around him goes wild. Terry wins the prizefight, and more importantly, the pride and fulfillment that comes with victory. 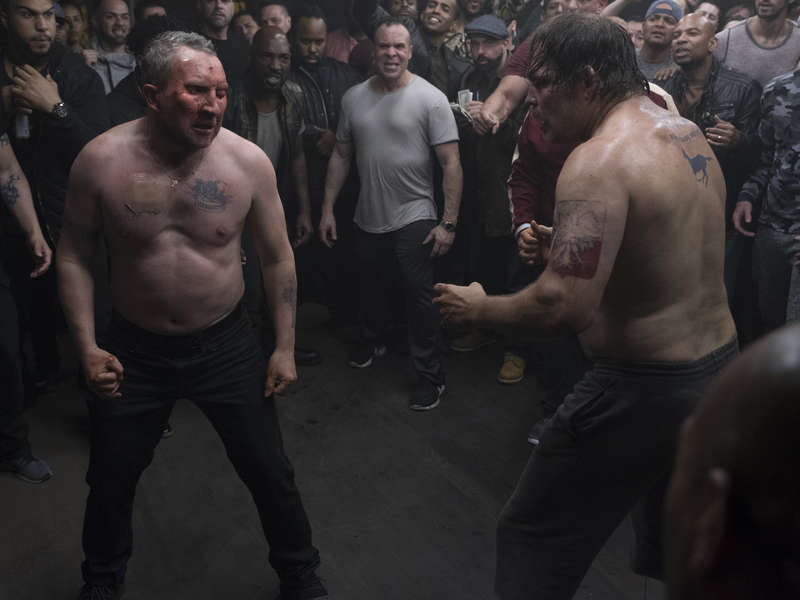 Back at Aunt Sandy’s house, Mick and Sandy are doing what most of us would do with three million bucks stacked on the dining room table. Mickey is planning to flee to Vietnam and live like a king for the rest of his life, but not before listening to the Four Tops while getting absolutely smashed. Personally, I would queue up “Ask the Lonely,” “Reach Out,” “Baby I Need Your Loving,” and “Walk Away Renee.” Bunchy is out running errands before leaving the States for good, and Mickey passes out from the boozy fun. Sandy takes one look at Mickey and one look at all that money on the table.

Ray returns Jay White to the film set so he can kill Mickey’s doppelgänger in a reshoot. For his trouble, Samantha tells Ray that he now owes her three million dollars. Ray always pays his debt, and I’m eager to see how he does it this time. Ray’s cell phone never stops ringing. This time, it’s Smitty, and he needs to talk. Ray meets his future son-in-law at a bar, and Smitty comes clean. He owes eighty grand to the Albanians, or they are going to disembowel him. Smitty doesn’t want Ray’s money, but he does need Bridget to stay somewhere safe while he pays off his debt. Ray shrugs. What is eighty grand when he already owes Samantha three million? Instead of scaring Smitty straight, Ray takes on the debt and asks where he can meet these Albanians. Later that night, Ray pops his trunk, grabs his bat, and kicks down the door of Smitty’s adversaries. Ray takes all of them out, and allows Smitty to jump in and get in a few kicks of his own.

It is admittedly hard (impossible?) to imagine Ray not running off Smitty from his daughter, but perhaps Ray’s trip to the verge earlier in this season has taught him that he can’t change anyone that doesn’t want to be changed, least of all his dysfunctional bloodline. Bridget has chosen Smitty after all, and there’s not much Ray can do now except to keep his daughter safe.

Someone who no longer has Ray’s protection is Bunchy. He pulls up to Aunt Sandy’s house, walks in the door, and is ready to jump the border. Until he sees that empty kitchen table where an hour earlier, three million dollars lay. Mickey wakes up, and words fail them both. For all of their trouble, they stand penniless and on the run. I hope they still have their fake passports. 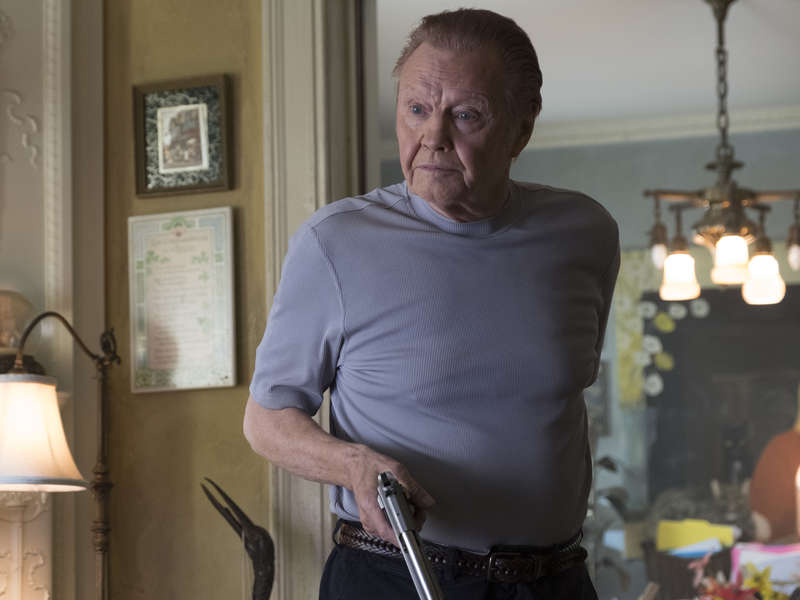 Terry sits down for a post-fight celebratory drink, and his phone rings. It’s a distraught Bunchy, standing on the side of the road with nowhere to go. This is one of those foreboding phone calls where someone professes their half-assed love and all of their prior shortcomings. A stormy shadow hangs over each word. Bunchy never saw one of Terry’s fights. He couldn’t stand the sight out of primal fear for his big brother. Terry feels Bunchy’s desperation through the phone line and begs him not to hang up. It’s all been forgiven, just please don’t do anything stupid. Click. Perhaps the best thing Bunchy could do is turn himself in, but my bet lies with one more — hopefully not final — terrible decision.

Ray and Smitty drive home after brawling with the Albanians. Smitty pokes at Ray. Why wood? Baseballs are proven to travel 5% further with aluminum bats. Ray is stumped. No one has ever asked this question. No one really asks Ray a question. They merely just ask him to fix something. He finally, formally retorts: “You bring that sh*t around my daughter again and I’ll break your arms. We clear?” Before Smitty can reply, Ray adds, “Did Carlton Fisk use fucking aluminum when he won Game Six? No. He used f*cking wood.” As Ray and Smitty disappear into the streets of Manhattan, Aunt Sandy is smoking, drinking, and driving into the unknown with the loot.

The sixth season of Ray Donovan reaches 33.3% completion with “Pudge,” and every scene in hindsight has carried necessity and meaning. The neo-noir sensibilities of the first two episodes gave way to the series’ proven formula of a break-neck-paced popcorn thriller. Ray had to go out to the fringe to decide what is worth fighting for. For better or worse, above his own soul, it is his fucked-up family. And he’ll work a day job to support them.

A few other take-aways from “Pudge”: it is a MIRACLE that Jay White made it through this episode alive. I’m still amazed Ray and Anita haven’t slept together. Something tells me that Mac is about to get Ray in a whole other world of trouble. What in the world are Bunchy and Mick going to do now?! Where can they possibly go? How will Ray pay off his three million dollar debt to Samantha? When will Ray and Mickey finally come face-to-face? Can Ray Donovan sustain this kind of momentum for another eight episodes? I’m dying to find out.