[Cooper] Who’s the lady with the log?
[Truman] We call her the Log Lady.
– Twin Peaks, pilot episode

[Log Lady] One day my log will have something to say about this.
– Twin Peaks, season 1, episode 1

Famously, neither David Lynch nor Mark Frost like to discuss publicly who contributed what bits to the various incarnations of Twin Peaks. This is one of the reasons why they work so well as a partnership. Neither one is a glory hound. They both honor the collaboration. Fans trying to tease apart their individual contributions are, in some sense, doing harm to the overall project.

But there are places where we can distinctly know that one partner and not the other is solely responsible for the words coming out of a particular character’s mouth. And no one has something more important to say than the Log Lady. 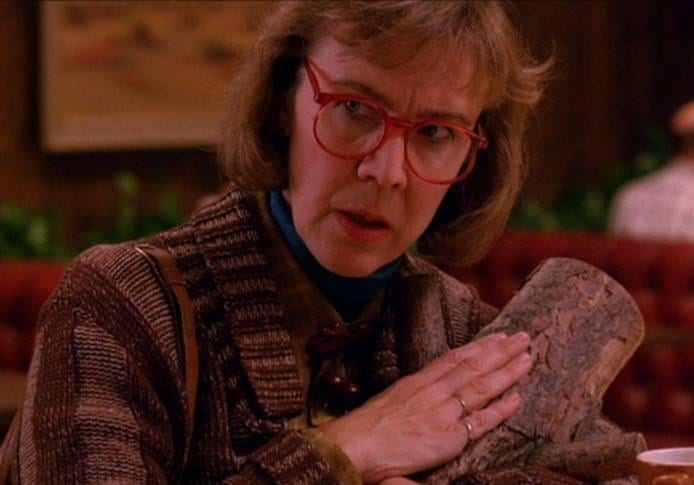 Margaret’s role has been constantly evolving as Twin Peaks itself evolved. In the original pilot, she was just another one of the quirky characters who inhabited this strange and wonderful place. As the series progressed, she became a conduit through which information flowed between worlds, but her part was merely that of an interpreter. The log was a witness the night of Laura’s murder. The log had messages for Briggs and Cooper. It’s not until episode 24 that she finally stands apart a bit from her log, when it’s discovered that she and Major Briggs have similar marks and she shares a little of her backstory. And then that’s pretty much it for the Log Lady in the original series, minus Windom Earle showing up in disguise as her at the Miss Twin Peaks pageant.

Somewhere in the middle of Season 2 though, a Lynch did get a solo crack at the Log Lady, although it was Jennifer Lynch, author of The Secret Diary of Laura Palmer. Her Log Lady was more human, showing a level of compassion towards Laura diametrically opposed to the seeming contempt she had for just about everyone in the television series. She is still acting as interpreter for the log, but at least some of the wisdom she imparts seems to be coming directly from her heart. She warns Laura that “things” (not just owls) are not what they seem. She speaks of the woods as a place of learning, but also sometimes a place for monsters. She tells Laura that the owls “are sometimes big”, as Laura would find out in a few later encounters. Most importantly though, she gives Laura hope.

Mark Frost has said that they gave Jennifer Lynch and Scott Frost (author of The Autobiography of F.B.I. Special Agent Dale Cooper: My Life, My Tapes) some plot points that they wanted them to hit in their respective books, but largely gave them free rein otherwise. So it’s hard to say then whether this interpretation on the Log Lady came from the showrunners or from the author. In the years following the finale of the original series however, Twin Peaks became the exclusive output of the David Lynch side of the partnership, pretty much until the idea for Season 3 surfaced. 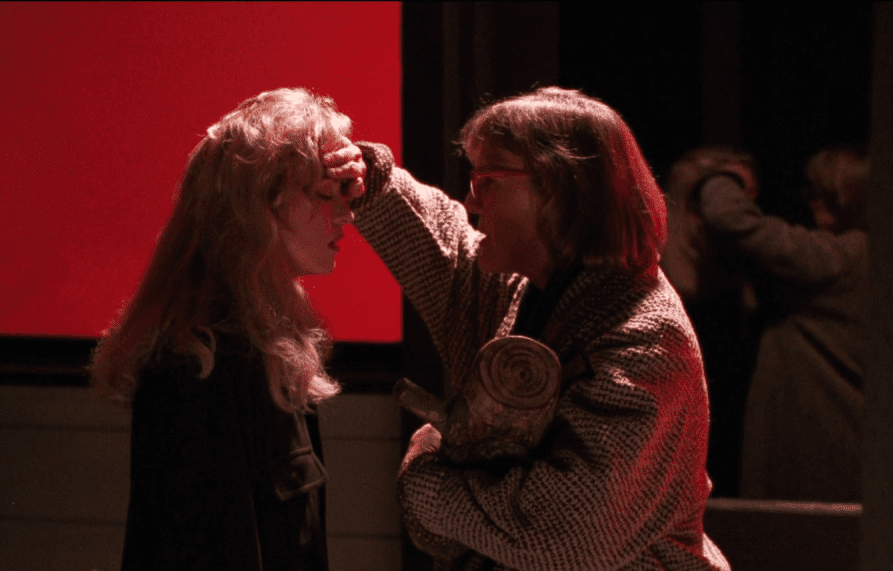 In 1992’s Fire Walk With Me, the Log Lady only speaks 30 words in the theatrical release, but they are words most fans know by heart:

“When this kind of fire starts, it is very hard to put out. The tender bows of innocence burn first and the wind rises – then all goodness is in jeopardy.”

Now, of course, David Lynch didn’t write that script completely on his own either. He took Robert Engels along for the ride this time, filling in the role that Mark Frost bowed out of. So, it’s still possible that this is not Lynch’s exclusive take on Margaret, but we are certainly getting closer.

Then, in 1993, came the Log Lady introductions for the Bravo network re-broadcast of the series, each one written and directed by David Lynch exclusively. In her previous incarnations, she was merely passing along information passed to her by her log. The log was the conduit, she was the interpreter. Now though, Margaret is the conduit. She has achieved oracle status, and the deity she is channeling is David Lynch. 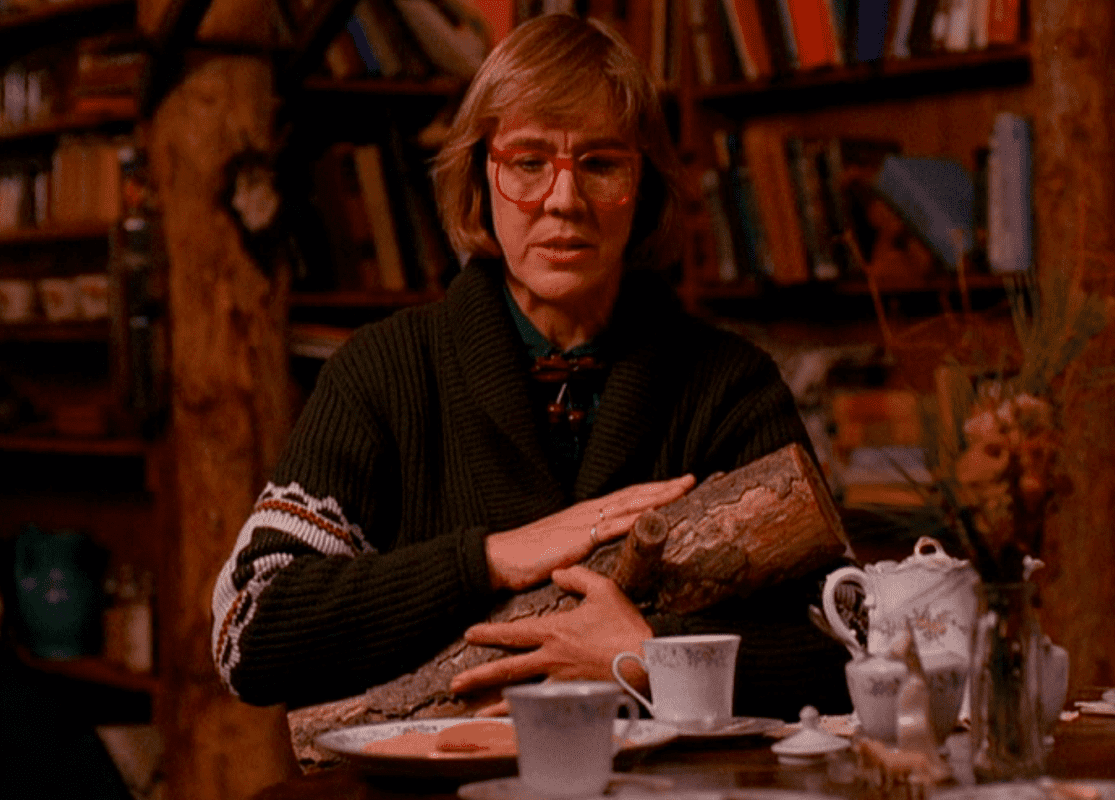 The Log Lady intros give us, perhaps for the first time, some small insight into how the notoriously tight-lipped David Lynch interprets the events of the original series. Margaret is cryptic as ever, mentioning twice that there are some things she is not allowed to talk about. Here is the first time we hear that “Laura is the one”. Many of the intros mention fire and her anger towards it, but at the same time, her mention of bad fire implies the existence of good fire. She talks of secrets and mysteries, puzzles and clues, ideas and dreams. She takes a frivolous moment to extoll the virtues of pie. She expresses David’s “sadness” at having to reveal Laura’s killer, yet practically hands us the answer as to how to interpret the final scene.

She breaks the fourth wall in these monologues and speaks directly to us, the viewers. Often she asks us questions, leading questions intended to get us thinking. She gives us advice. She even tells a joke. And in the end, she signs off with “it has been a pleasure speaking with you.”

We cut next to 2014, 20+ years later, as Mark Frost and David Lynch team together again to write the screenplays for Season 3. Once again, Margaret is speaking from both creators. In Season 3, Margaret (no longer “The Log Lady”) appears in five parts, and all five of them take their titles from bits of her dialogue. Those dialogues are all phone conversations with Deputy Hawk, where she relays clues, warnings, and reminders.

She ends, of course, with one of the most poignant death scenes of the entire series. Not only is the character dying, but in a perfect blurring of the lines between fiction and reality, so is the actress. Catherine Coulson would pass away four days after filming her scenes for Season 3, and was one of several actors who passed away between the filming of their parts and the airing of Season 3. In interviews, Mark Frost, who was facing the imminent passing of his father Warren Frost, has highlighted mortality and the passage of time as a necessary theme they felt compelled to explore.

The Log Lady continues to be used to explore that theme in the two books Mark would go on to write after the screenplays were written. In those appearances, we now have a chance to witness the Log Lady channeling the solo voice of the other half of the creative partnership. In The Secret History of Twin Peaks, she gives a eulogy for her friend, Robert Jacoby, and in Twin Peaks: The Final Dossier, she gives her own eulogy. In both memorial services, she talks of the coming of a “dark age,” giving advice first to not be afraid, and later on how to use the light we all hold inside us to make the darkness yield. She extolls life as a gift, to be treated like a library book that must eventually be returned, the kind of literary metaphor that could only come from Frost.

Her final words, the last words of wisdom we will ever have from the Log Lady, are these:

“This truth I know as sure as the dawn: Darkness will always yield to light, when the light is strong.”

Mark Frost has her end on a message of hopefulness, and I think through that, he is telling us that we should not despair at the ending of Season 3. The darkness and the light move in cycles, both in the series and in real life, but in the end, the light has an edge on the darkness. And as long as we do not forget that, there is always hope. 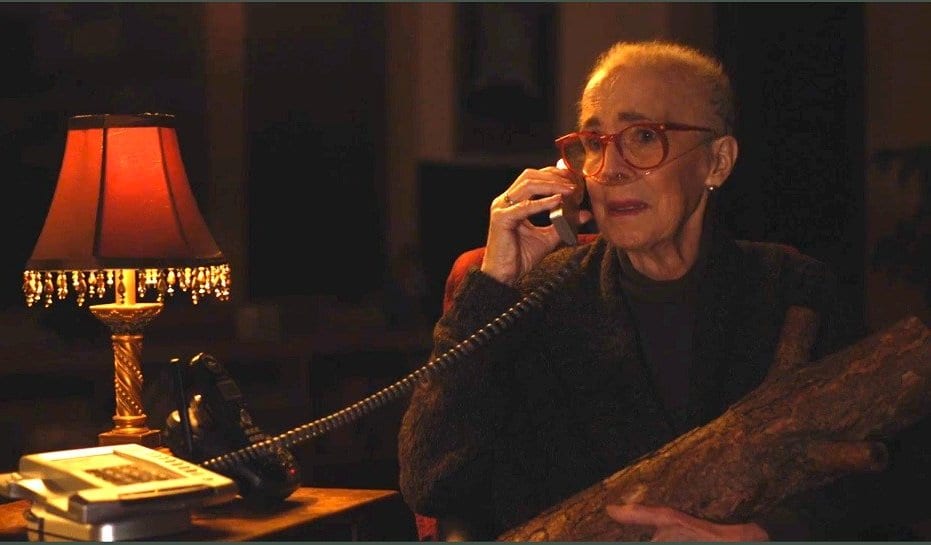 [Log Lady] Now the circle is almost complete. Watch and listen to the dream of time and space. It all comes out now, flowing like a river. That which is and is not.
– Twin Peaks, season 3, part 10