One of the many life lessons I’ve adopted from Twin Peaks is FBI Special Agent Dale Cooper’s advice, “When two separate events occur simultaneously pertaining to the same object of inquiry, we must always pay strict attention.” Well, the two separate events that I’m colliding here to share are very recent screenings of David Lynch’s 1999 film, The Straight Story, and John Carroll Lynch’s 2017 film, Lucky. Their shared object of inquiry is aging, and more specifically, the cinematic exploration of elderly life. Elderly protagonists are a rarity on the big screen. Rarer still are representations like these of Alvin Straight and Lucky, respectively, who are captured in a wide range of moments of reflection and projection into what’s still possible and perhaps personally necessary. Alvin and Lucky grapple, exposed to the spectators’ views, with mortality and the shifting senses of agency and meaning that come with the territory of elder years.

I believe both of these films can play vital roles in deepening people’s capacities to experience old age together. And I recognize that those capacities already range widely, shaped as they are by idiosyncratic and broader cultural factors. In my own case, I grew up, and, after 18 years away, returned to a small town in Northeast Iowa, so Alvin’s story is close to home in all senses of that phrase. When Alvin returns from the doctor’s office early in The Straight Story and completely dodges the real assessment the doctor gave him, well, that is the straight story. One just doesn’t burden others or admit to the weakness implied by needing help, and these two taboos are intricately bound together in ways that are equally taboo to explore. What’s amazing about The Straight Story is how David Lynch paints this experience from the points of view of an elderly protagonist and the people who love him, who care about him, and who encounter him as a stranger. 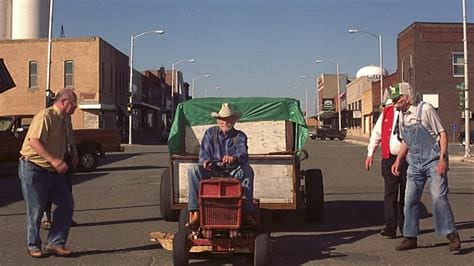 Speaking of a significant visit to the doctor, Lucky also features one of these scenes, yet the tone and mood distinctly differ from Alvin’s appointment. The scene in Lucky is played with a comedic rapport between Lucky and the doc, and their familiar banter leads to the doc framing his message unflinchingly in the context of Lucky’s advanced age and inexplicable fortune to have avoided lung cancer, emphysema, and other terrible repercussions of lifelong smoking. I’ve talked to some people who criticize this film for sort of endorsing smoking, but I don’t quite agree with that. The scene doesn’t seem dismissive of the widespread devastation of cancer so much as it delivers an inspiring conversation between a medical professional and an elderly patient where they both recognize each other and how to help each other, particularly how the doc can help the elderly Lucky grasp the opportunity of the life that remains without glossing over the challenges that are also going to intensify more rapidly.

In addition to the doctor visits, The Straight Story and Lucky also include highly emotional sharing of combat memories with a stranger in a public space for eating/drinking. Both scenes deliver conversations that develop slowly and carefully as each pair of characters arrive at events that have haunted them for decades. It’s fascinating to observe how these conversations unfold without much eye contact between the pairs or remarks on the other’s experience of the event and the decades of being haunted by it. These elderly vets somehow observed in the strangers a common territory and opened to it. Alvin says in what could feel like a non sequitur that he can see it right away in another person when they carry this kind of weight around and have some need to speak it out loud. Although Alvin isn’t the sort of person to talk straight up about feelings, he prefaces his account of the event that haunts him by saying that what he can’t shake is that his buddies’ faces are all still young to him and that the more years he lives mean the more years they lost. By paying careful attention to Alvin’s words, it becomes clear that part of this haunting is also a contradiction between living in a culture that prizes rugged self-reliant individualism and caring deeply about communities, be they extended family, fellow townsfolk, or an army unit.

Lucky, on the other hand, inhabits a different family and cultural landscape than Alvin. Unlike Alvin, who lives with his daughter, Rose, Lucky lives alone and in a part of the US where languages and cultures mingle more than in very small Iowa towns in the 1990s. As Lucky, himself, remarks in what seems a genuine sentiment, there’s a difference between being alone and being lonely: implying that his aloneness shouldn’t be presumed to equate to loneliness. And this is important for thinking about the diversity of elderly experiences, and how social and alone time are experienced and desired differently. When Lucky shares combat stories with the stranger who wandered into his regular cafe, one of the main motives seems to be making sense of a life that is drawing to a close, making sense of the collected fragments that marked and moved him through the years. Whereas Alvin is haunted in the context of taking his epic journey to make peace with his brother, Lucky is haunted in the context of facing the fear of dying he can’t always admit to himself and the pull he feels to build for himself a notion of meaning from an atheistic and sorta Buddhist perspective as he faces the fear.

Watching these scenes, I was reminded of Timothy Morton’s idea that the face is a map of all the things that have ever happened to that face/person. Richard Farnsworth and Harry Dean Stanton played these roles with inscribed map faces that attest to long lives. To see such faces in cinema is shocking, and in my experience teaching people in their late teens and early twenties, it can be received as repulsive. But if you think about it, really think about it, aren’t these faces far livelier than the lineless foreheads and uniformly capped teeth of the vast majority of faces in cinema? It helps me realize how much easier it is to talk with aging parents and others about funeral arrangements and cemetery plots than about the pains and grappling with regrets and searches for meaning. It’s easier to watch movies with people who look like corpses than elderly living folks trying to get through another day. 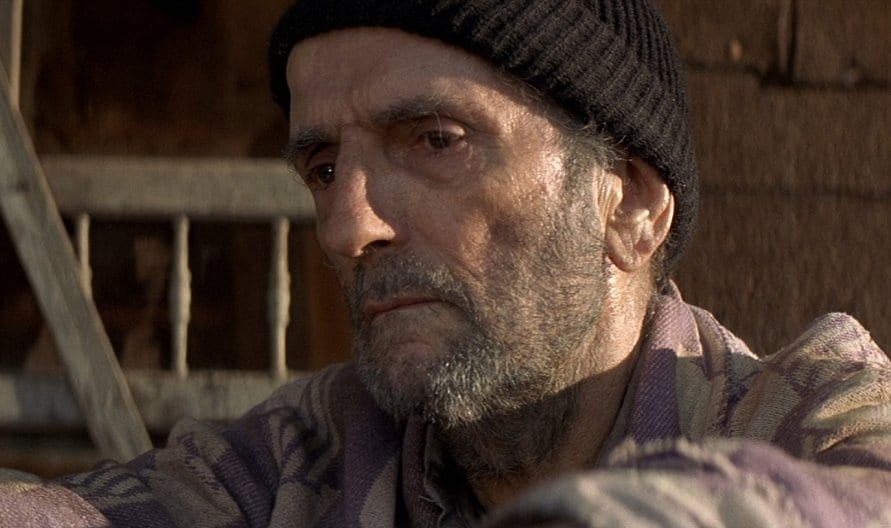 I’ll keep this piece brief because I want it to be a foray that might invite others to watch one or both of these films, and use the experience in your own way to explore how rare and wonderful cinema like this can facilitate working through the experience of elderly living. As I draw it to a close, I want to point to two things in The Straight Story that resonate weirdly and vibrantly with Twin Peaks.

First is the yellow center lines of the highway, particularly early in the film when Alvin initially sets out to cross Iowa. In Twin Peaks and a lot of other Lynch films, yellow center lines appear: quite often illuminated by auto headlamps during night drives and at relatively high speeds. But in an early sequence, the camera moves at a riding mower speed along the center lines, accompanied by a slow folksy string soundtrack. Then the camera rises up to the clouds, lingers for some time, then returns to Earth to show Alvin via a grammar of film time that reinforces how little distance Alvin has made even as the break from the momentum of home boundedness and estrangement from his brother, Lyle, is akin to achieving escape velocity. It’s a David Lynch signature but in the unique register of finding a way to accomplish escape velocities from accumulated negativities in life.

Second, there’s a scene when Alvin’s daughter, Rose, has a conversation with a checkout clerk when buying a lot of braunschweiger and wieners for her dad’s trip. I couldn’t help thinking about Sarah Palmer’s awkward (to put it absurdly mildly) conversation about jerky with Victoria, the checkout girl, in Season 3 of Twin Peaks. It strikes me that David Lynch brings to the foreground the weird power encapsulated in the point of purchase, particularly of food. There’s a piece of identity in what a person buys to put in their mouth and that gets exposed in a pseudo-public space at the checkout. In The Straight Story, Rose suddenly sees herself in relation to her dad from a whole new perspective, and similarly in Twin Peaks, Sarah Palmer suddenly sees something (I think it’s at least in part a re-evaluation of her relationship to Laura as parent and child and external forces that influence them and their connection to each other).

A last thought: making the move from exploring new perspectives on elderly living through watching these films and having conversations and doing things differently in community with aging people in your life seems to me likely to remain super challenging, but if Alvin could muster the energies and actions to make his journey, perhaps any one of us can initiate a conversation with a loved one or a stranger in a bar or cafe to reduce the negativities in the world and see where it goes.