When we left Ray Donovan last week, he had Anita Novak bent over his kitchen counter. Business not so much mixing with pleasure, rather slamming into it. Ray’s efforts to improve a fetching client’s poll numbers in the New York mayoral race had all culminated here — and as this week’s episode “A Girl Named Maria” picks up — the two lovebirds move to the bedroom and finish the deed.

Cut to another bedroom in New York where Samantha Winslow wakes up with a gun to her head.

All of Sam’s dirty tricks to get Anita elected are answered. She is pistol whipped by a masked man who advises her to back the fuck off. A follow-up from the mayor’s threat last week. What seems like another problem for Ray to solve in this episode might uncover the one true vine of the season, revealing what Ray has really, truly gotten himself into in New York. Aside from Anita Novak.

Ray wakes up alone and finishes the rest of a bottle of whiskey, sitting on the couch stark naked. His last grasp of solitude in the episode. 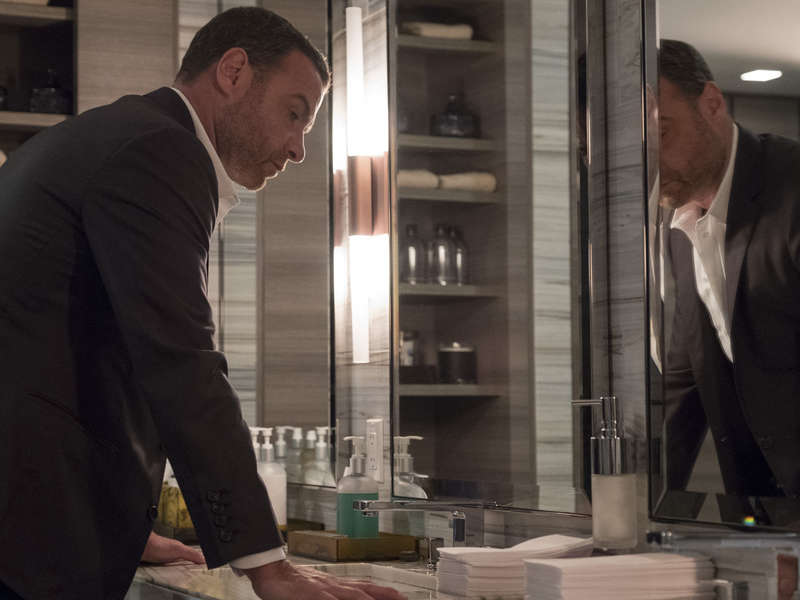 Sam is spattered in blood, maybe concussed, and rightly pissed off about her intruder, so Ray and Lena set off to figure out who exactly broke into the apartment. A strange old lady in a ballroom gown and pink gloves stares and whistles at them from across the street. She’s either a red herring, or someone who might show up again down the line with sage advice.

Terry is at the gym, babysitting Bunchy’s daughter. Uncle Terry has built a playpen out of over-sized boxing gloves to keep his niece from escaping into the streets of Manhattan. When the organizer of the fight club offers Terry another chance at fading glory, he can’t say no. Terry then calls up Bridget for a favor, who has no idea she will be taking care of a kidnapped toddler. He then cranks the pacemaker attached to his brain up to eleven. One bright idea of many this week.

Sam and Lena get to know each other in the odd coupling of the episode. Sam is observant, entirely able to tell Lena comes from family money. Sam relishes in the experience of biting her assailant last night, then asks Lena if she’s ever bitten anyone. Lena goes down memory lane, revealing that she was in jail once and bit a bully. The take-away here is that Sam really likes the taste of biting people.

Ray tracks down New York mayor Ed Ferrati in the cozy confines of a swank health club. Ray offers him a nickel’s worth of good advice to never send his henchmen after Sam again, punctuating the warning with a Ric Flair-worthy chop to the throat. As the man gasps for air, Ray issues a straight up death threat. Ray then heads to a surveillance specialist to pull the camera footage from outside Sam’s building. Whoever is running this joint knows Ray and Abby from back in the day. One of the more seemingly random events in the episode. Since it is a NYPD camera, Ray will have to wait while the footage is pulled. He calls Mac just in case.

Mac is in over his head. He is back at the diner with Emerson Lake (Max Casella’s character now has a name! Thanks to IMDb.) Mac has been wearing a wire and collecting dirt where he can, but none of it is good enough for Emerson. He wants more, and Mac has no choice but to assume Anita’s position on Ray’s kitchen counter. Emerson notes that a judge on Mac’s wire mentioned the mayor, and he’d like to learn more about that. Mac looks like he has seen a ghost. He stumbles outside and throws up his breakfast.

Bridget walks into Terry’s gym and sees Maria, and blurts out, “What the fuck?” I regret not keeping count of how many times this poor kid has heard the f-word this season, so let’s start now. Terry looks like he has snorted an ounce of cocaine, refusing to take his eyes off the punching bag. Bridget exclaims, “I can’t watch her for three fucking days!” Which adds a second donation to Maria’s college fund swear jar. Bridget asks all the right questions: “Does Maria’s mom, Theresa, know?” “Does Ray know?” “Is this a felony?” No, definitely no, and hell yes.

Conspicuous in their absence this week, Darryl, Smitty, and Jay White are nowhere to be found, making their dependably awful decisions. No worry, Mickey and Bunchy are here!

Mick is in his priest garb, walking down the aisle of a coach liner headed to the Hamptons, surveying all of the wealthy people he’s about to rob. We all take note of a stocky guy in a camouflage jacket, who most definitely is carrying a concealed weapon. Bunchy is waiting in the parking lot of a church, sweating his ass off in the stolen yellow Suzuki Samurai. For extra effect, he is cranking some gangsta rap and calling the attention of an actual priest who wants to bum a smoke. Mickey pulls out a pistol and announces a stickup. If everyone turns over their valuables, insurance will cover it, and they will all have a great story to tell their rich friends when they get to the beach. 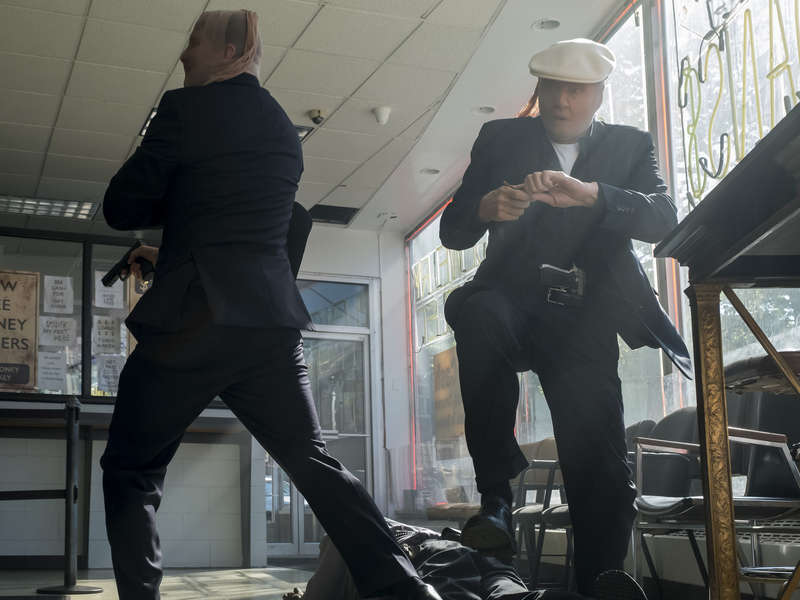 The bus pulls into the church parking lot, and Bunchy boards the bus for backup.

Of course, the camouflaged vigilante on the bus is packing heat, and pulls a gun on Mickey while he collects his loot. Jon Voight’s eyes tell us that Mickey has no reservation about killing this guy, until Bunchy pulls out his gun and threatens to shoot Mick if he were to kill anyone. The Mexican stand-off ends in a stalemate, and the bandits exit the bus with only one purse holding thirty dollars. The Donovan boys are right back in that yellow Samurai, unable to afford a night at the Motel 6. Right as Mickey blames his son for this major fail, Bunchy spots a check cashing joint.

The two priests in disguise don panty hose over their face and run across the street for an impromptu robbery. This makes no sense, as police would be swarming the area, looking for an automobile that sticks out like a sore thumb. But, I digress. Mickey and Bunch escape with — I’m guessing — a few thousand dollars. Not quite three million, but who’s counting? All that money that Aunt Sandy stole wasn’t even mentioned this week! In the world of Ray Donovan, I guess it’s no big deal.

Mickey and Bunchy are also seemingly no big deal to the NYPD. They drive their yellow chuck wagon into Manhattan to pick up Bunch’s daughter, Maria. Instead, Bunchy meets Maria’s mother, Teresa (Alyssa Diaz). We haven’t seen Teresa yet this season, and boy, is she pissed. Bridget called her up and told her exactly what is going on. Teresa will be taking Maria back to New York, but not before eviscerating Bunchy. Bunchy is devastated and has no legal or moral ground to lean on, with no choice but to absorb the blows from his ex-wife. He can only fight back by pulling the trump card, blaming everything on Teresa’s infidelity and mental problems. Bunchy gets smacked, and Theresa takes off with their daughter. Bunchy wants to blame Bridget and Terry for all of this, but instead stumbles off into the night. More broke, more alone than ever. At least he is ditching Mickey, who speeds off into the Manhattan night with more money and more revenge on his mind. 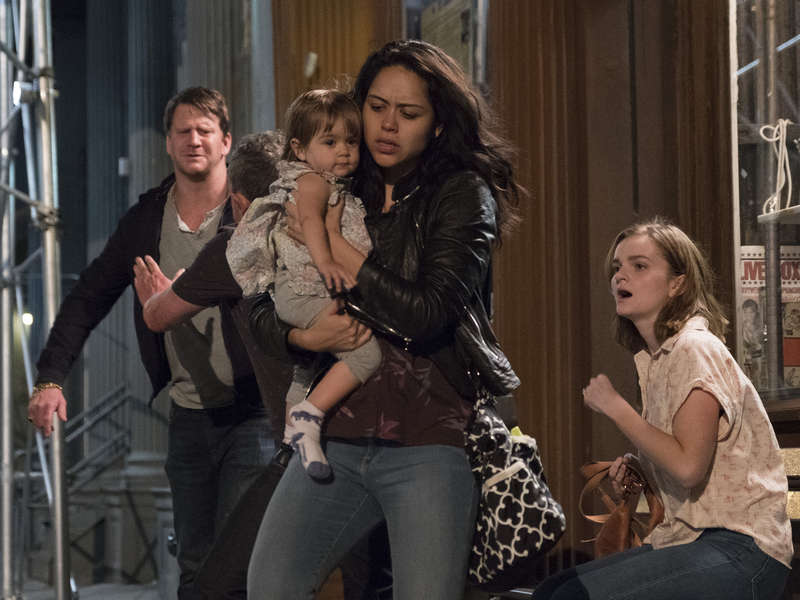 Take note here — Mickey didn’t get out of the car and encounter his family. The coming blow out with the Donovan patriarch and all of his offspring is finale-level shit, and nothing less.

Meanwhile, Uncle Terry is back at fight club, kicking ass and taking names. Actually, he breaks his opponent’s arm to win the bout. The crowd goes wild, Terry takes a bag of money home, and seems intent on retiring — even after he is offered the chance of winning fifty grand at an upcoming tournament. He tells the kingpin that if he keeps turning up the pacemaker on his brain, people will continue getting hurt. Finally, grown-ups making grown-up choices on Ray Donovan. For now.

Mac calls up Ray. The footage from in front of Samantha’s high-rise doesn’t exist! Better luck next time. Ray heads back into the surveillance shop, and surprise-surprise, they have pulled up the missing footage. The perpetrator is a New York cop that Ray recognizes. This also means Mac was lying to Ray. So what do we make of Mac, here? What does he really know about the mayor’s connections with the NYPD, and why would he mislead his trusted friend?  I’ve never felt entirely comfortable trusting Mac, but my money says he turns out to be a net asset by season’s end. Then again, he could also end up the B villain right behind Mickey.

Ray confronts Mac about his lie, and Mac puffs his chest. Mac tells Ray to lay off the mayor. More importantly, he should cut off all involvement with Samantha Winslow and Anita Novak and get the hell out of town. Mac is already knee deep in a mess we don’t quite understand yet, and its apparent he knows much more than he’s telling Ray. Ray’s loyalty matches Mac’s conviction. There’s no way Ray will leave Sam, nor Anita.

Mac wasn’t bullshitting Ray. By the episode’s end, Ray is face down in a street, getting kicked, beaten, and cuffed by New York’s finest. 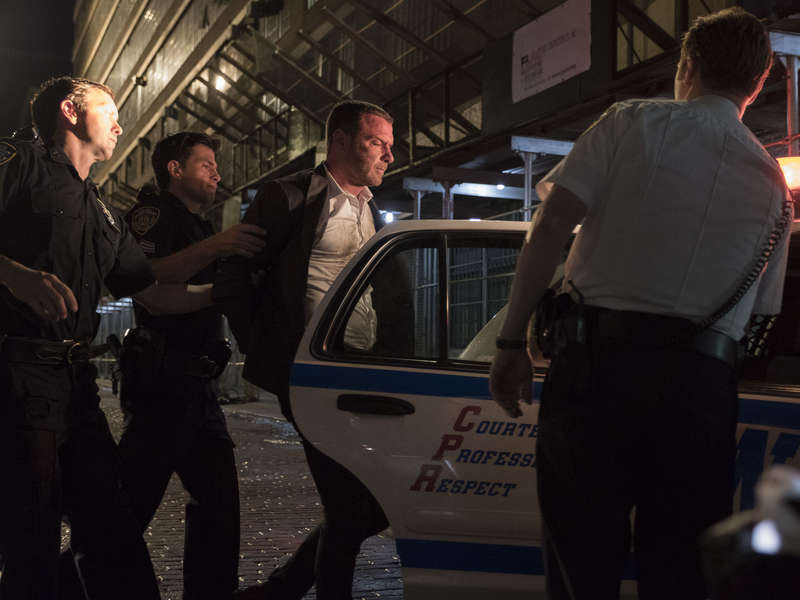 The halfway point of this season leaves us plenty of questions and a likely route for ensuing episodes. How in the world will Ray take on the institution of the NYPD? Can Mac be trusted? Is Terry’s addiction to adrenaline going to kill him by season’s end? When will Aunt Sandy rear her ugly head again? Will the next mayor of New York be Mrs. Ray Donovan? Tune in next week for “The 1-3-2.”