Christmas is one of those holidays that seem to bring out the best (and worst) in people. It may have something to do with breaking traditions or examining the possibilities of bringing a stranger into our own home, but we’re always enthralled with the celebration’s dark side. Whatever the reason, there’s plenty of horror films that embrace the holiday mystique. While Silent Night, Deadly Night may be the first film you think about when it comes to Christmas horror, there’s another choice that has earned the right to be a holiday horror classic.

Christmas Evil is hard to describe—even when you think you know exactly what to say. In the course of the film, viewers encounter issues like childhood trauma, socio-economic imbalance, mental health issues, voyeurism, and disturbing symbolism. If you’ve never seen the film, there’s a learning curve that requires patience and a realization that tongue-in-cheek can co-exist with heavy-handed social commentary. For everyone else, it’s a seasonal spectacle that is as campy as it is serious. 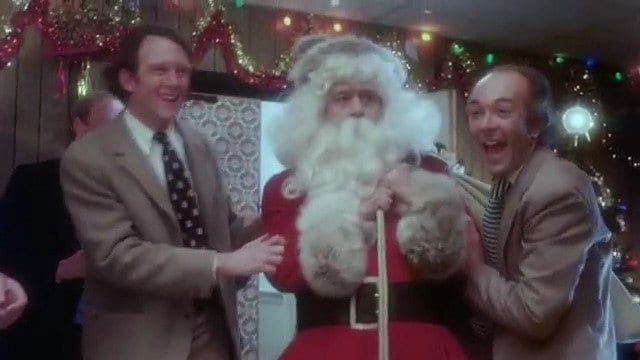 The Myth of Santa

One of the things that Christmas Evil does so well is play with everything you know about the jolly old fat man; this is not hero-worship and the film’s earliest scenes make that abundantly clear. Seeing the image of Santa distorted in a sexual way is just the first instance of taking on this iconic character’s purity—it also serves to prove that there’s a human underneath the costume that is far from the magical man children hope him to be. Later on—when murder is on the mind of our lead character Harry—this longing for the purity of Santa takes on a grimy, dirty hue. As he continues throughout the dark tale, this killer Santa gets more sullied by the minute with stains and sludge covering an otherwise pristine outfit. It’s not just the lead that gets in on changing perceptions of icons; there are a plethora of Santa’s that find their way to one of the local police precincts. All reveal their true inspirations and thoughts on being brought in during the prime Santa season in typical adult tones. Among all of this, it’s striking to see that one of the characters even questions turning Santa into a sort of twisted inspiration for better behavior; asking whether it might not be such as bad thing if children believe that evil might befall them when they’re naughty. That mentality alone makes it an ultimate contrast between the childlike aspirations of a lead on the brink of insanity and a world of adults that are far closer to him than they would like to be. 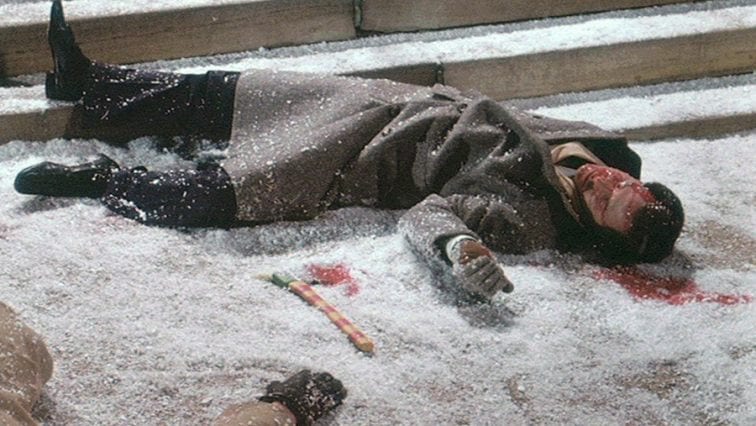 All Work And No Play…

It’s no understatement to say the Jolly Dream toy factory is itself a microcosm for good, evil, and everything in-between. Every day, our lead character Harry comes to work with a hope that the team will make quality toys for kids; it’s an idealism that is all or nothing as he lectures other employees to do better. Others at Jolly Dream don’t share that same feeling—even exploiting Harry as they go out for nights at the local bar. Even the company’s boss is far away in a tropical paradise, pleading through a TV screen for workers to give more as he does nothing but profit off of their work. It’s enough to make Harry snap on the spot, but his growing anger has a few more steps to go before it hits full throttle madness. Later—as he goes through the motions of mayhem—it only stands to reason that the dirty Santa would return to a spot that held hope for his ideals as well as possibilities. Harry’s destruction of the toys left behind may be grounded in a need for perfection, but speaks to something deeper inside of his crumbling psyche. 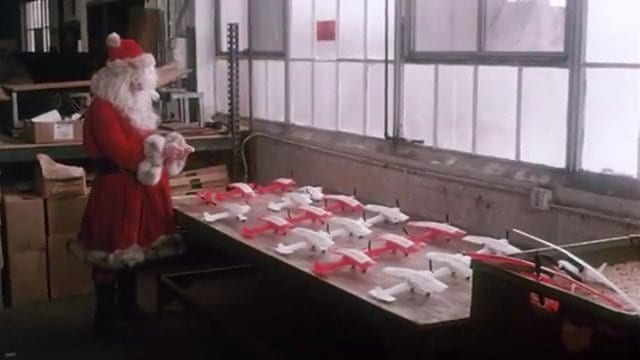 They say that your family defines who you’ll be as an adult; for Harry, one moment along the way seems to have created a childhood trauma that is inescapable. His idiosyncrasies may have more factors than his family’s behavior, but one moment offers a defining look at the issues dwelling just below the surface. At once—his brother and his parents shatter illusions in one seemingly innocent set of circumstances. Young Phil revealing the identity of the person portraying Santa is nothing more than a sarcastic moment that every kid undergoes. Harry’s parents are doing something completely normal, which they think is well away from the eyes of children. Both his parents and his brother did nothing wrong—unfortunately, those hard to control circumstances prove to be life-changing for someone else. When Harry engages in cutting himself to relieve the pain, it’s actually a heartbreaking concept to see someone so young grapple with such confusions.

As an adult, Harry’s issues with Phil seem to be buried until the film’s central events bring them back to the surface. While Phil’s wife almost ignores his concerns, it’s a resilient Phil that realizes his own brother could be capable of dangerous things. You feel the brother’s struggle as he tries to balance care, concern, and general frustration at Harry’s actions. It only stands to reason that the last time the two will be together involves Phil trying to incapacitate his brother and Harry responding with a thunderous punch.

It’s easy to find a lesson about society in Christmas Evil. The adults that confront Harry in front of the church are condescending and rude; his co-workers indulge in using and abusing him. Of all the examples, nothing speaks to the human mirror that Harry is becoming than the sequence between disgruntled town adults and himself. Their children surround their Santa; his soiled clothing and dirty beard mean nothing to the childlike wonder that surrounds their hopes for Santa. It’s not surprising to see them protect a perceived hero as their own parents come forward—one even carrying a knife. It’s a testament to how we can wipe away our convictions to become the very thing we loathe.

With so many holiday horror films out there—and even more arriving—it’s easy to overlook some of the lesser-known classics. Christmas Evil doesn’t get as much attention as its contemporary counterparts, but this odd classic deserves a second look. This is not the standard horror film; instead, it tries to be different and for the most part, succeeds. After all, who says you can’t have a little murderous social commentary this Christmas?