This was one of those weeks of Ray Donovan where I continually said to myself, “What? What?? WHAAAT?!” Not everything made perfect sense, but I have faith it will in the coming weeks.

The beginning of “The 1-3-2” picks up where we left off last week, with Ray getting thrown into the back of a cop car. A beautiful drone shot follows the urban New York grid overhead, un-cut, ushering Ray all the way into the precinct. If you’re just now tuning in, Mr. Donovan has knuckled up and decided to take on the institution of the NYPD, who answers to the puppet master of New York, Mayor Ed Ferrati. Last week, Mac told Ray to not only quit fixing for media mogul Sam Winslow and her personal choice for mayor, Anita Novak, but to get the hell out of town.

It isn’t that Ray doesn’t listen, he just shrugs his shoulders. Emitting that steady signal of “whatever.”

Ray isn’t booked and printed, he is thrown into a utility closet, interrogated, and repeatedly hit with a stun gun when he won’t cooperate. Ferrati and the cops know everything: One, Ray set up the mayor during that debate with Anita. Two, he arranged the Central Park rape attempt that made Anita look like a hero, and strike three, Ray laid the smackdown on Ferrati in the cozy confines of his health club. Only after Mac pleads with his crooked colleagues can he get Ray out of the shoe and back on the street. There’s just one condition — Ray must betray his boss, Sam, and sink the Novak campaign.

Bunchy is pounding PBRs with his brother Terry, entirely distraught that he is a fugitive of the law who has lost his wife, daughter, and three million dollars. All he has now is a beer belly, the gold chain around his neck, and Terry’s undying brotherly love. Watching the two converse on the edge of a boxing ring, I am not convinced either will make it out of this season alive. This moment matters. Terry’s fight club habit is going to bite him eventually, and Bunchy’s string of bad luck and badder decisions is unlikely to make a u-turn. Bunchy wants to turn himself in, but not before a pilgrimage to South Boston with Terry to bid adieu to their deceased mother and sister. Daryll waltzes into the gym, looking to blow off steam. Jay White has been sent to rehab and the production of Mister Lucky is on hold for a month. With nothing better to do, Daryll tags along with them to Boston.

Meanwhile at Penn Station, Mickey Donovan is looking to take a train north. There are no tickets left until that evening, which gives Mickey an entire day in the city to raise hell. But not before buying a wig and mustache disguise. 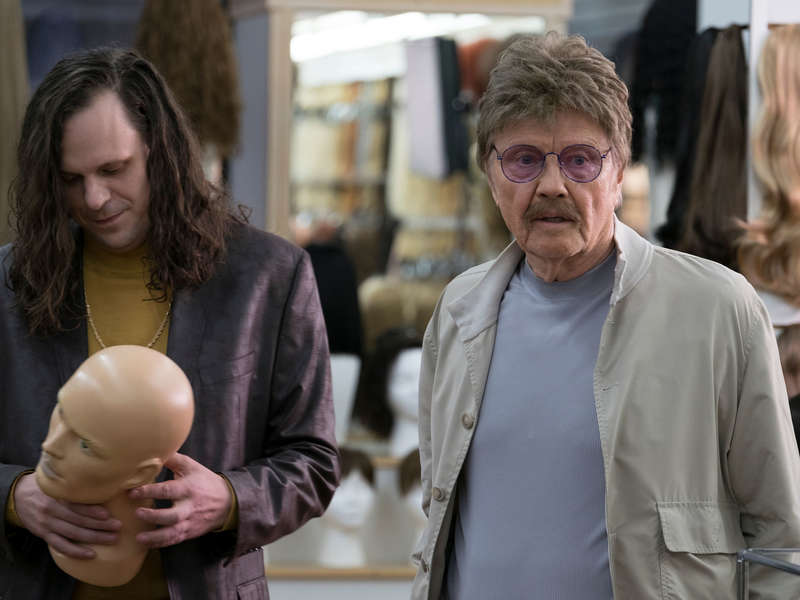 Mac is still in hot water with Emerson Lake, an undercover cop that has caught on to Ferrati’s schemes with the NYPD. If Mac doesn’t turn up a smoking gun linking the mayor to the cops, he is totally going to throw Mac in jail. This sucks for Mac. How is he going to snitch on the powers that be, keep his job and pension, and avoid prison? Emerson has him cornered, and if Mac doesn’t produce hard evidence next time, he is done. Oh yeah, Emerson also wants to talk to this Ray Donovan fellow that has been mentioned on Mac’s wiretap.

The cops have the clampdown on Ray. They have staked out Bridget’s apartment, ready to put the squeeze on the person he loves the most. Ray sends Lena to get her out of the eye of the storm, and Lena promptly blows up the gas tank of an El Camino for a distraction. (A personal note: for once in my life, I’d like to calmly walk away from an exploding automobile, not looking back to even survey the damage.)

Ray and Emerson meet up on a pier to talk shop. Emerson lays out the game board: Ferrati and Sam Winslow’s duel is over the Arthur Kill prison on Staten Island. It’s the source of Ferrati’s millions in kickbacks, and where Sam wants to set up shop for her streaming company. Emerson will arrest Ferrati in the end for being a crook, but he needs to buy time, and more importantly, for Ray to cover Mac’s ass while he gathers evidence.

With no other viable options, Ray begins dismantling the Novak campaign. Ray calls up Justine, the pawn in the “Central Park incident,” and orders her to go on a tabloid news show and come clean about the circumstances of Anita’s vigilante heroism. Ray tells her how it’s going to be: Justine was no innocent jogger being attacked, she was a plant, and oh yeah – do NOT whisper the name of Ray Donovan. If Justine doesn’t cooperate, her junkie brother will never see the light of day again. ‘Cause Mac locked him up that morning! Ruthless.

Justine’s interview hits the air. Lena and Anita are devastated, the cops are pleased, and Ray walks down the sidewalk alone. The mayor’s henchman tells Mac that they aren’t done with Ray — they want him to incriminate Sam Winslow too.

Let’s take a step back right here. Ray Donovan is not one to give in and do what he’s told, but he’s doing just that. Sam is literally going to kill him over this and Anita will likely never speak to him again. Lena’s relationship with Justine will be wrecked. Even if Emerson takes down Ferrati in the end, it’s impossible to imagine Sam, Anita, and Lena not hating Ray’s guts. At least he’ll have Mac.

Smitty is back at Bridget’s apartment, and calls Bridget to see where she is. With impeccable timing, Mickey knocks on the door. Mickey is still planning on fleeing to Vietnam and wants to say a final goodbye to his granddaughter. He grabs the phone from Smitty, and Bridget wants nothing to do with him.

Terry, Bunchy, and Daryll arrive in Boston and go to the gravesites of their mother and sister. Two missing souls that could have pushed the Donovan boys down different, less troubled paths. Can I take a moment here to say Eddie Marsan and Dash Mihok are doing their best work of the series, six seasons deep? Some serious soul being delivered.

The Donovans take their grief to a pub and connect with some old neighbors. Daryll’s LA Dodgers hat catches flak from some of the bar patrons, and an all-out brawl ensues after a string of racist and homophobic insults. These idiots have no idea that Terry is a veritable killing machine, and deservedly get their faces beaten in. As the three amigos walk down a sidewalk and relish in their victory, Bunchy sees a church. He heads in, and kneels before the cross, and blames every instance of his bad luck on the Father, Son, and Holy Ghost. Bunchy has every right to throw a weeping fit, all while naming every room of the church he was molested in as a kid. He then turns on himself: “I deserve it, don’t I?” It’s hard to watch, yet impossible to deny Bunchy’s emotions.

Dash Mihok is the only actor on Ray Donovan that gets permission to lose it time and again, and it’s always a joy to see Bunchy let ‘er rip. Bunchy just wants a damn break. And someone up above is listening. Two minutes later, Bunchy is outside on the sidewalk, ready to turn himself in. Something catches his eye – mother-fucking Aunt Sandy! The three million dollars! Aaaaaaahhh!!!

Bunchy sprints after her car, while Terry and Darryl wonder just what their brother is running after.

Mickey is waiting for his one-way train, and picks up a newspaper to see his own face staring back. He’s still an escaped murderer with a bounty on his head, after all. Right after Mickey tucks the cover story into his bag, he notices a man staring at him, glancing back-and-forth at him and his iPad. Mickey is spooked, and dashes through the terminal. He bumps into a policeman, and instead of a polite “excuse me, Officer Friendly!” he pushes the cop down and hauls ass, with everyone staring at him. The final, superlative WTF act  in “The 1-3-2.” 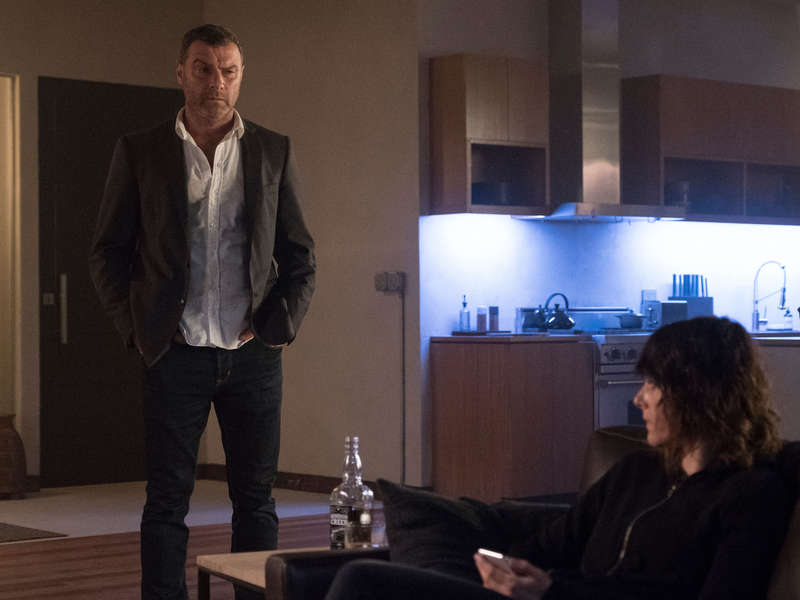 Ray walks in the door after a day’s work, and Lena is waiting on him, nursing a bottle of Jack Daniels. She gives him whatfer and storms out the door. Bridget is next in line to pile on. The widescreen frame places father and daughter as far as possible from each other, reminding us that Ray has a lot more fixing to do if he ever wants a meaningful role in his daughter’s life again. A hungover Ray later emerges from his slumber. Sitting in his living room is literally He-Man in a suit. Ray rises to his feet: “Who the fuck are you?” A Dolph Lundgren doppelgänger lands a knockout punch, sending Ray down for the count, and into next week’s episode. Future Ray Donovan binge-watchers won’t be able to resist the temptation.