The precipice separating dreams from nightmares punctuates the human experience. So often when we find ourselves embarking on something we have been hoping for or near something we’ve been waiting for, we enter an anxiety-ridden and stressful state, mulling over every decision that led us to the point we are about to experience. This counterintuitive wave of emotions illustrates the complexities of human desire and our fears of achieving that which we think we want. A filmmaker who is no stranger to exploring the intricacies of the emotional states of human beings and the aspirations of those held back by their place in the world is Sean Baker. His 2015 feature film debut, Tangerine, follows a prostitute in pursuit of the one who broke her heart. Journeying through Los Angeles, Tangerine creates a new perception of “normal” not typically given cinematic screen time. The audience is introduced to a world in which few of them would be familiar to depict the broadness of the human population.

Similar to Tangerine, Baker’s 2017 follow-up feature, The Florida Project, explores similarly ignored aspects of humanity to display the life of a child, suppressed by the economic system, next to the happiest place on earth. Just as the palm trees and Hollywood sign created the backdrop of Tangerine only to be juxtaposed with the violence-filled quest to find a cheating pimp, The Florida Project was teeming with gorgeous purple skies and lush landscape, a beauty that was just out of reach of those that live in the housing projects next to Disney World. Shining a light on a place where, for many, dreams come true and their most jubilant memories are made, reveals a place in the shadows where ignored human beings struggle just to survive. 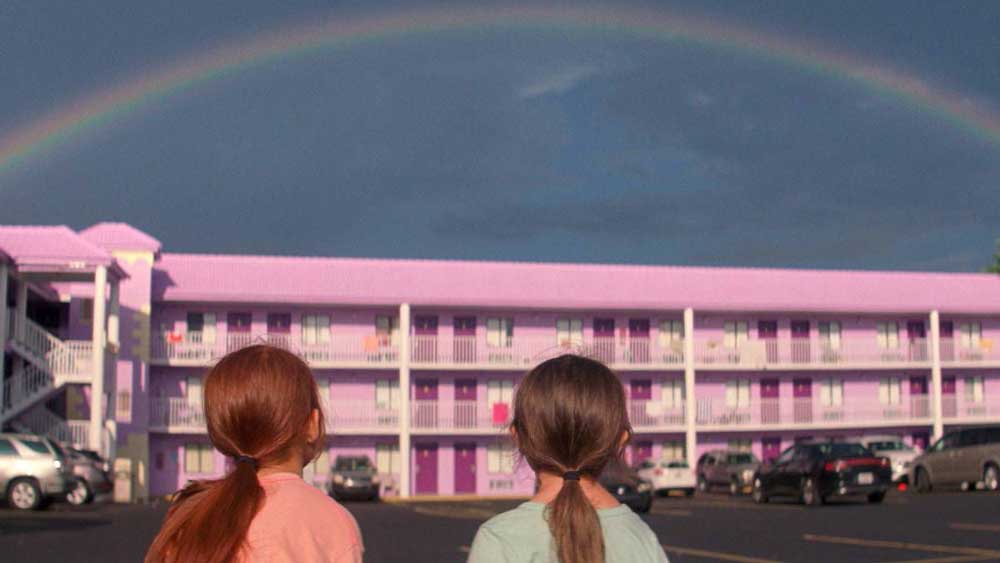 The Florida Project is told from the perspective of Moonee (Brooklynn Prince), a 6-year-old who lives with her mother in a motel just outside the resorts in Orlando, Florida that cater to the tourists of Walt Disney World. Moonee’s life is as rambunctious and energetic as any young child’s, while also being a bit reckless with no toys or structured activities to fill her time. Moonee’s mother, Halley (Bria Vinaite), survives largely on welfare and has developed a guarded attitude with little respect for others, constantly feeling the need to protect herself from getting close to anyone who may not have her best interest at heart. In many ways, Moonee is a mini version of her single mother, passing the time spitting on cars and hustling customers at the ice cream shop for enough money to split a cone with her friends that experience the same financial hardships that she does. Moonee and the other young people that live in the housing projects with her don’t come from situations that allow them to live beyond the day-to-day. Halley and Moonee are able to eat because another resident friend of theirs works at a restaurant and can give them free food, while they live in a motel room that costs $65-a-week, where they are constantly reminded that they are not allowed to establish residency.

We see Halley, from Moonee’s perspective, attempt to get bus passes at the welfare office because that would take care of the immediate transportation concerns. This family, so discarded by the state, can’t afford to make plans further in the future than the day they are in as a means to survive the physical structures and the psychological turmoil of the positions they inhabit. The comradery of the other residents of the housing projects acts as another means to survive. There is a whole community within their building and a unique economy—a trade and bartering system, a hierarchy of idiosyncratic residents, and manipulations that can be made to get through another day (a struggle that is rarely given attention cinematically). They’ve certainly made the best of things, but their existences resemble those experienced in prison, with the exception that the bars they live behind are the invisible restraints of capitalism.

“These are the rooms we’re not supposed to go in, but let’s go in any way,” Moonee says to a new friend she makes as she is showing her around the motel, but it can be just as easily applied to the life of her and her mother. Halley and Moonee spend much of their time buying perfumes at wholesale in an attempt to sell them to clients of the nearby golf courses and resorts as a means to pay their lodging for another week. The very places they visit in an attempt to make money are places they are not allowed to enter just like the rooms at the motel they are not supposed to access. The opportunity structure has been tilted so far away from them and so far toward the guests entering the resorts of the Disney World complex that it is jarring to see Moonee and Halley in the same screen with the others. 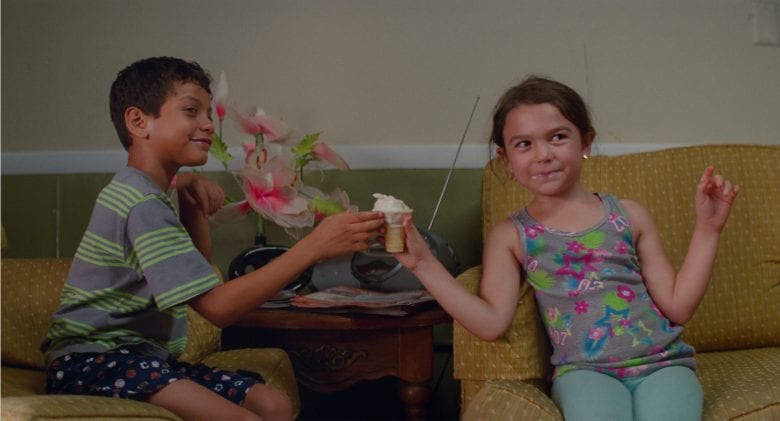 The kids whose parents buy them the armbands they wear (granting them access to the park) would never think of spending a day where their entire community watches a condominium burn to the ground because at least that moment, as a spectator, gets them away from the consumerism through the television that they can’t afford. Most of what the audience sees the children and adults watching when they are in their rooms with the televisions on are infomercials of products they can’t afford. Capitalism partially maintains itself by feeding children and adults alike with a curated image of what will bring their lives happiness and fulfillment. When Moonee and Halley see the commercials on television though, there is no longing in their eyes because they have lived outside of the means of production for so long they have been disassociated from what it means to be a consumer. Halley and Moonee struggle with just enough money to survive that they can no longer fathom having extra, and certainly cannot think of spending that extra money on something to, even temporarily, enrich their lives.

The perspective Baker employs throughout the film—that of the child—enriches his narrative and intently focuses on how different life looks when you are young. Few adults can remember how broad the world looked when you were young, yet how much you thought the adults in your life had this massive world figured out. Not only can Baker remember that feeling, but he can also commit it to film in such an unadulterated way that audiences can relate both to what Moonee sees and what we know Halley to be doing. For instance, Halley dresses in a swimsuit alongside her daughter to take “swimsuit selfies” which, for Moonee, is a fun activity that she is doing with her mom, yet the audience can see that Halley is using the photos of herself as an advertisement for the sexual services she is offering.

Baker keeps the backs of the children’s heads in view of many shots to remind the audience of what the children are seeing, and to remind us that each of us at one point also saw the world from the vantage point of a child. He is also reminding us that often what we saw in those moments remain with us for the rest of our lives, shaping the adults we eventually become. One such moment in which the back of Moonee’s head is in view is when she is seeing her mother argue with the Department of Family Services, who have been alerted to Halley’s prostitution solicitation and have come to remove Moonee from her care. Moonee could see from across the street that there was increased activity happening outside of her room. When she got closer, she could hear her mother yelling and hear the discussion of “another family” all while the adults come down to her level, ushering her away from the situation as a means to protect her from what she’s already seen. 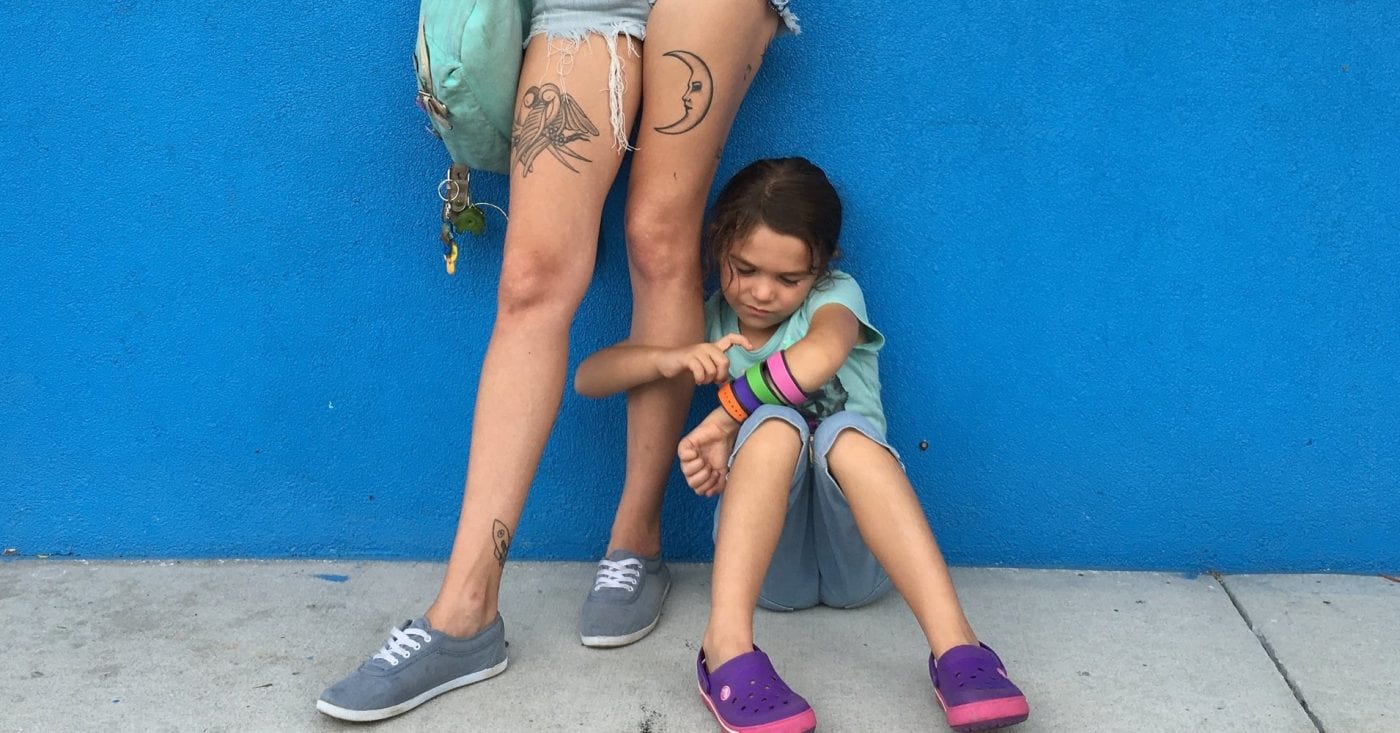 The Florida Project seems to suggest that we can never really be protected from that which we have experienced, no matter how young we were during the experience. There are coping mechanisms, sure, that helps us overcome difficult situations, but the moments we live through even from childhood impact us in a variety of ways for the rest of our lives. Halley genuinely loves her daughter and did the best she could through her manipulation of the opportunity structure to take care of her and make sure Moonee’s childhood was as enjoyable as it could be. She jumped in puddles with her in the rain, had pizza parties in their motel room, took her to watch the Disney World fireworks on her birthday in the nearest parking lot they had access to, and bought her toys when she was able to secure more money than usual. However, all of these methods of enjoyment and protection are insufficient in removing oneself from a situation.

Moonee didn’t know how different her life was, as she was only surrounded by those in the same position she occupied. Her removal from her mother, the housing projects, and the community she understood will undoubtedly be a shock to her worldview and will likely bring an even more intense reminder of just how far outside the system she has been residing. This commitment of Sean Baker’s to enhance the way in which his audience sees the world by reminding us of the many different narratives that make up the human experience is a real gift to the cinematic landscape of the underrepresented.