No one said the Hero’s Journey was a boring path to walk and this episode begins with a frantic view into Wheeler’s home life. He is a primary caretaker of what seems like dozens of brothers and sisters and their friends. Here, we see what a kind heart Wheeler is as a human being. It begs us to love him more. No wonder he needs that joint.

The Red Oaks reveal happens as Wheeler, taking a hit from his joint, fades into black and white.

Red Oaks is firing on all cylinders today as David walks into the Tennis shack and nearly trips over Nash who is sleeping on the floor, and apparently has been for a while now. We find out that his wife kicked him out and does this periodically. No surprise, really.

Doug and Fay Getty stand on the terrace, surveying the landscape and speaking about Skye. Doug is worried that Skye hates him but Fay thinks she’s just going through a phase, but they both know the truth. Skye has no love to spare for either of her parents right now. Getty laments that they used to be closer and worries they gave her too much. Fay says she’s always been her own person. She woke up all the other babies in the hospital and wasn’t happy until she had a room of her own. This is an amazingly telling statement here about Skye. Think about it for the rest of the series, just a great narrative detail and I’d love to know which writer came up with it.

“Don’t you remember Day 1 in the hospital, they were already calling her a ‘Diva?’” —Fay About Skye

Getty says, “God, it all goes so fast.” This is a refrain from his statement to David in Episode 3 “The Wedding,” about how 30 years was gone like that. They think they should talk to her but instead, they both go for a steam and a massage.

David thinks he’s getting hit on by the same couple who wished the bride all her ups and downs between the sheets. Dr. Dale Blum, starts talking about David about his open mind and asks him if he’d be willing to join him and his wife Jean for, “A little social experiment.” Before he can complete his request, the Blums have to run off to lunch with the Katz’s, but Jean plants a loving one on David’s cheek before she leaves the court with her husband. Things are getting weird at Red Oaks today.

Nash confirms to David that the Blums are indeed swingers and asks David why he thinks they want him for their little sex game. David’s only answer is maybe his legs, which prompts Nash to deliver a poetic ode to his own legs, that David can only stomach so much of before he asks Nash what he should do. Nash tells him, “Close your eyes and pucker up.”

“Those are not legs. Those are broom handles wrapped in chicken skins dropped on the floor of a barber shop.” —Nash to David who thinks Jean Blum wants to swing with him because she likes his legs

David says no the Blums before they can even ask him. But it turns out they don’t want to swing with him. They aren’t cradle robbers, after all. No no, they just want to have sex with each other while David films it. Wheeler is a big fan of this new project and wants to be deeply involved. He talks David into it and taking him along for that ride. Sex Flu, indeed!

“Dude, Mrs. Blum has been my dental hygienest since I was like 12. I’ve always fantasized about what her boobs look like and this is an opportunity.”—Wheeler Petitioning David For A Role On His Film Crew–

David drops by the aerobics studio to let Karen know he won’t need a ride home. She asks him about his plans tonight and if they’re doing something together. David half lies and says he made plans with Wheeler. Then he asks Karen if she wanted to hang out and she immediately says no but then backtracks. She’s revealed something here, the growing distance between them. They are more like high school friends now than serious lovers.

Skye is walking up to the pool when she sees that her father has fallen asleep reading, his glasses askew. He probably looks so old to her and she walks out of her way to place his book on the ground and remove his glasses, giving him a more dignified appearance. She does appear to still love him in spite of all that repulses her about him.

“I don’t know where your mother finds these people. Honest to God, they’re like extras from a Fellini movie.” —Sam to David

Wheeler and David hurry up to the Blum’s door but Barry opens his first and Karen stands outside it. She didn’t tell David she was attending her own little shooting session.

The Blums greet the boys with lasagna and a cat named Mittens. Wheeler chooses to wave because he’s allergic to cats.

Barry goes to work capturing the best part of Karen, after her nice personality, of course. The Blums have their own ideas about what the plot narrative should be before the main event happens in this porno film. David is open to suggestion here and gets into position, Wheeler positioning the boom mic. David waits for the Blums to move but when they don’t, he asks if something is wrong. Wheeler says, “They’re waiting for you to say ‘Action.’” Remember this moment, my friends; there will be a big call back to it at the end of the series. A wild night kicks off, peppered with Wheeler’s sneezes and Dr. Blum’s ridiculous back hair. This guy makes Robin Williams look smooth.

Barry instructs Karen about how to hip pop. She’s nervous so Barry pours her a drink.

“This cassingle is so boss.” —Barry Playing “My Kinda Lover” By Billy Squier On His Boombox–

The boys are ready to go to jail when the cop comes in to disrupt the party because they started without him. The Blums are swingers and this party is just getting started!

Karen takes it all off for Barry because she’s in the safest place in the world, his dojo.

Wheeler absent-mindedly reveals he is a virgin as the boys walk to the car, completely wrecked from what they just witnessed and filmed.

Karen leaves Barry’s apartment looking unnerved and a bit guilty. Sure, they didn’t have sex but what they just shared was pretty intimate, right? Especially since she didn’t tell David where she was going. When Barry leans in for the kiss, Karen says she can’t and runs the other way. He closes the door, sipping his wine, looking forlorn.

Getty is working late in his study and Fay wants him to come to bed, but he’s waiting up for Skye. She’s still his daughter, as he says in Episode 3 “The Wedding.”

Wheeler and David are topping their night off with ice cream.

“His back hair was like the rug in our den.” —Wheeler About Dr. Blum–

This is a great moment of friendship bonded over a shared fucked up experience. Wheeler reveals that his friendship with Misty is going well, but that they are hanging out with zero physical contact. He’s putting his time in where it needs to go and this is as it should be with all the things that truly matter to us. Wheeler asks David about him and Getty’s daughter. David says nothing, that he’s still with Karen (but for how long, David?). Wheeler says David was like a real director tonight. The night was, as they say, “Legendary.” How many nights like can you remember, my friends, nights you would call Legendary and at least one other person agrees with you?

Nash tucks himself in on the floor of the Pro shop. Karen rubs her neck in bed and is probably thinking about Barry and that kiss she ran away from tonight. David comes home to his father sleeping on the couch, mirroring the moment Skye caught her father earlier. David seems to consider his father lying there on the couch, perhaps thinking about how much he’s aged since the heart attack, or perhaps noting how he is not sleeping in his mother’s bed. David goes outside to sit on the step and think about what life dealt him today.

If he thought today was nuts, just wait until the next episode “Body Swap.”

JB Minton is the author of the upcoming book A Skeleton Key To Twin Peaks. Learn more about his work here. Watch him work on Instagram and check 25YL every Wednesday for the next article in this series.

Author of The Skeleton Key to Twin Peaks and Contributor to 25YL. Josh also co-hosts the Red Room Podcast. 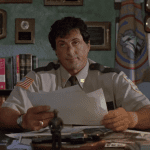