Ray Donovan fans got a little more under the Christmas tree than a new episode this week — they got the announcement that the series would definitely be returning for a seventh season on Showtime in 2019. Eddie Marsan, who plays Terry Donovan on the show, then announced on Twitter that filming would resume in the spring in New York. With this news, we can glean that Terry won’t die this season (surprised?) and that the show is staying put in Manhattan for the time being.

None of this good news means that the manure truck won’t stop unloading on Ray and company. He woke up at the end of last week in a mental hospital, and it hardly gets any better for him throughout this week’s instalment, “Dream On.”

Perhaps I’ve missed the message from Ray Donovan all season. Ray is clinically fucking crazy. And so is the rest of his family, for that matter. We enter the synapses of Ray and ride the lightning, where we are right back in that ivory stairwell with him, hearing a muffled orchestra through the walls. He looks up to find the ghost of his wife, Abby, staring down at him. Ray is still following the love of his life into the ether, or, rather to the top of that building he jumped off at the end of last season. That decision has consequences that are still bleeding through Ray’s pressed white dress shirt.

Ray wakes up in the mental hospital with guest star Alan Alda trying to psychoanalyze him. Ray wants none of it, and writes off his public episode due to low blood sugar. Dr. Alda gives him an egg salad sandwich and fails to dig past the surface. During free time, Ray takes note of all the troubled, paranoid patients around him. It’s visitation time, and someone has come to see Ray. By now, everyone hates Ray’s guts except for Mac, and amazingly, it’s Bridget who has come to see him. We are all as shocked as Ray is. Bridget swore last week that she was leaving town and that she never wanted to see Ray again, until she realized her father might be certifiably insane and in dire need of help.

There are no hugs, kisses, or explanations, there is just a request from Ray for Bridget to call Mac and get him the hell out of there. Bridget has no idea who Mac is, but begrudgingly makes the call after Ray nearly blows up: “Are you going to fucking help me or not?!” Bridget waits for Ray’s release, with Lena at her side. Both women are ready to be done with Ray, but for all of Ray’s transgressions, he has given them both more than they could ever repay. For better or worse.

Mac sits down at the pub with two of the crooked cops that answer to Mayor Ferrati. The jig is up. Ferrati thinks there is a rat and that someone is talking to Ferrati’s rival and Ray’s former boss, Sam Winslow. New York’s finest are ready to flay the snitch. Little do they know, his name is Sean “Mac” McGrath.

All of Mac’s connections get Ray back on the street, where Bridget and Lena await him. Because Lena is entirely fed up with Ray, she tells Bridget that her father jumped off a building two months ago and tried to kill himself. Ray’s dark, shameful secret is finally out in the open (I’m rather amazed that Ray told Lena to begin with). Bridget lays a guilt trip on him the second he steps out of psychiatric care: “What about me? What about Conor?” Instead of making it right, Ray makes a bee-line for Mac in the waiting area, and they set about trying to bring down Ferrati and save their own asses.

Mac tells Ray that they’ve got to kill Emerson Lake. Emerson knows everything, and is ready to lock Mac away if he doesn’t deliver some hard evidence that Mayor Ferrati is in league with the NYPD. Mac might have the best idea all season, but Ray rebuffs him, and says he will take care of it.

Over at Aunt Sandy’s house, Darryl is fresh out of the shower with only a washcloth to cover him, while Sandy ogles. Ick. Once Darryl can wrap a towel around his waist, he spots a bunch of old analog equipment lying in a stack of junk. Sandy sets up the recording rig and Darryl wants to properly record an old soul joint he once wrote. The unlikely pair spends much of the episode laying down tracks for their future Soundcloud account. 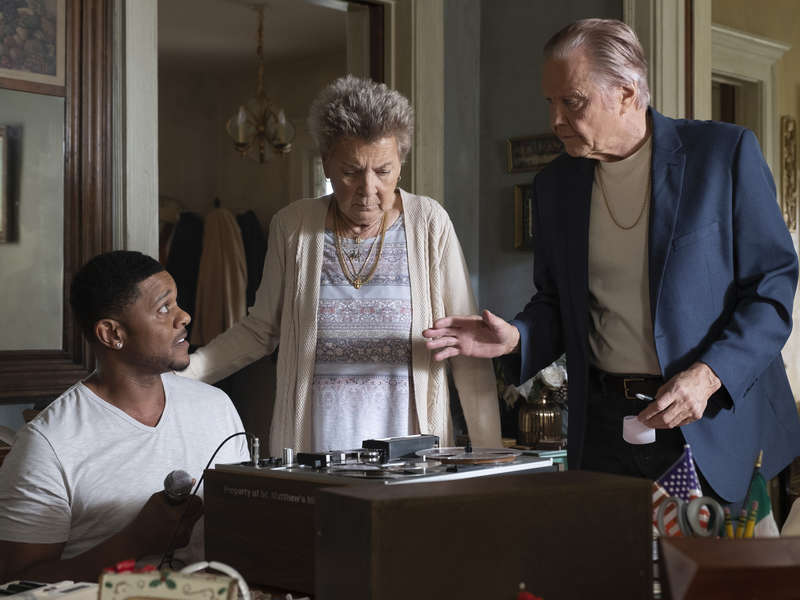 In other news, Terry Donovan is alive! Not only does Terry still walk among the living after last week’s brawl at fight club… he actually won the bout and is still in contention for the 50 grand in prize money. I suspect the pacemaker attached to his brain was knocked loose during the victory, because his tremors from Parkinson’s Disease have returned at full strength. Mickey shows up at his door looking for Ray. Even though Terry wants nothing to do with his dad, Mickey is a desperate man, grasping at straws. He finds out Terry is deep into a tournament with a huge cash prize, and gets the bright idea of sending Darryl to fight in his place. Darryl would rather record his songs with Sandy, and Bunchy wiggles his way into the fight.

Ray shows up at Ferrati’s deserted bowling alley and demands a meeting. Ray does the unthinkable and tells the Mayor that he knows who is recruiting rats within the NYPD. Here’s the hitch — Ray wants clemency for Bunchy in return for the identity of the informant. Let’s take a step back. If Mayor Ferrati’s influence reaches all the way to the FBI, why in the world would Ray try to swerve him? I’m still absolutely unclear about what is driving Ray to continue engaging with Sam Winslow, the New York Mayor, and their feud over some land on Staten Island. Why wouldn’t Ray just kill Emerson Lake and go back to Los Angeles at this point? The easy answer is because it’s episodic television and Ray Donovan is too proud to back down. For my personal tastes, I would like richer, more evocative motivations.

Smitty is smoking a joint and packing up his and Bridget’s belongings for their move out of town. Bridget walks in the door and tells him that she can’t leave town after all. Her father is a sick man, and he needs her. Smitty shrugs. He is just along for the ride, and let’s face it, he’d be dead without his bad-ass future father-in-law.

Ray meets up with Emerson to run a wild idea by him. Ray wants to meet with Ferrati again while wearing a wire, and thus capture the mayor on tape and document his participation in a widespread conspiracy. This one piece of evidence would sink Ferrati, get Ray back in the good graces of Sam Winslow, ensure the election of Anita Novak (who has been kinda MIA lately), and get Emerson off the backs of Ray and Mac. Ray will even drop Emerson’s name to make it all sound real. Emerson grimaces, then acquiesces to the gamble and instructs Ray to tape a microphone to his, ahem, perineum.

This one perfect plan would tie up an entire season’s worth of drama, which tells us it will all assuredly go very, very wrong. Ray drops by to see his family friend that runs the surveillance shop to hack the frequency and make a separate copy of the conversation. File this tidbit away in your memory.

Back at fight club, Bunchy stands across the room from a big, bald, bearded, and black killing machine known as “The Iron Lung.” Terry offers sound advice, and Mickey downplays the situation: “He’s just a fucking weightlifter.” Mickey also takes note of the inhaler that Bunchy’s opponent is huffing on. As Bunchy dodges and weaves during the fight, Mickey sneaks over and grabs the inhaler. Bunchy lands a few shots, and when The Iron Lung’s asthma kicks in, Bunchy sends him down for the count.

“Win if you can, lose if you must, but always cheat,” said the late, great Bobby Heenan.

Ray pulls up to Ferrati’s bowling alley, picks up his phone, and calls his psychiatrist. Ray loses his nerve and hangs up. Healthy decisions must wait, and Ray heads inside to meet with the mayor. Ray rats out Emerson Lake and says he has killed him. Then, Ray drops the name of a crooked judge who has been documenting the mayor’s conspiracy this whole time. Ray’s hot microphone records the mayor’s order to kill the judge. Checkmate. Almost. 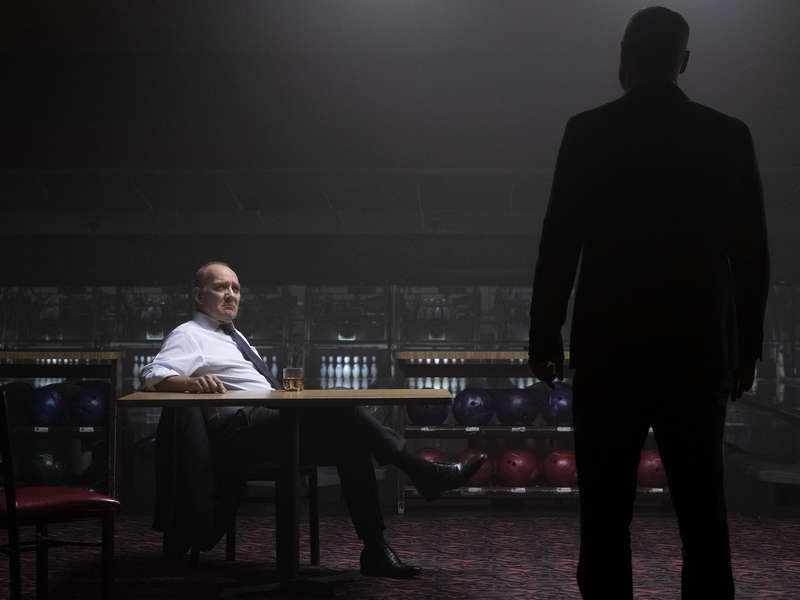 Emerson Lake is sitting outside the bowling alley, and as he drives away, he is spotted by Red, one of the crooked cops who was also listening to the conversation. Red immediately realizes that Ray was lying about everything, and takes off to follow Emerson. Ray leaves and picks up the extra recording of the mayor ordering a hit.

Darryl is still hanging out with Sandy, and she drops the needle on Aerosmith’s “Dream On.” The eerie guitar of Joe Perry soundtracks a montage that brings the episode to an end. Bunchy has moved on to the next round, and as he profusely bleeds from the nose and the mouth, his eyes are blank. He takes a few roundhouses before losing the fight, and Mickey flees the scene in embarrassment. Bunchy lies on the floor in defeat once again, while Mickey is now sitting in Ray’s living room with a gun.

Before Ray heads home, he swings by Mac’s house to deliver the one piece of evidence that will sink Ferrati and solve all of their problems. Instead of a touchdown dance, Mac is furious that Ray wore a wire with a mayor. Emerson Lake is sitting on his couch covered in blood, and Red appears out of nowhere and takes a billy baton to Ray’s skull.

Why is Mac mad at Ray? Is he just playing dumb because Red showed up at his house with Emerson? Ray has in his possession the one thing that can end their problems. Perhaps Mac is waiting for the moment to properly backstab Red. We’ll have to wait until next week to see how Ray gets out of this jam, and into the next.