Reading Josh Malerman’s Bird Box a few years ago was a riveting experience. I have read a lot of horror/thrillers throughout the years, but Bird Box put me on edge more than anything I have probably ever read. When I heard that Bird Box was being made into a Netflix movie, I was excited but cautiously optimistic about how it would turn out. And when I set out to write this article, I was expecting it to be—at best—a mildly popular cult-type film.

When the initial reviews came out and weren’t exactly glowing, I figured it was very possible that Bird Box would fade away from relevance quickly (if it became relevant at all). Then, on December 28, Netflix announced that 45 million people had watched Bird Box in the film’s first seven days.

NetflixFilm on Twitter: “Took off my blindfold this morning to discover that 45,037,125 Netflix accounts have already watched Bird Box – best first 7 days ever for a Netflix film! pic.twitter.com/uorU3cSzHR / Twitter”

Took off my blindfold this morning to discover that 45,037,125 Netflix accounts have already watched Bird Box – best first 7 days ever for a Netflix film! pic.twitter.com/uorU3cSzHR

Whether those numbers are accurate or not (I feel like they could be a tad inflated), it’s undeniable that Bird Box is a movie people are talking about. I can’t scroll through the old Twitter timeline without seeing someone talking about the movie (mostly snarky comments talking about Bird Box overkill). After watching the film and filtering out the buzz, I can confidently say: Bird Box is an intense, fast-paced thriller with an interesting concept and a good cast that any fan of horror and post-apocalyptic environments should check out.

Bird Box takes place in modern day times, in a world in which survival necessitates staying indoors and blocking out everything outside. Venturing out from shelter requires wearing a blindfold at all times—otherwise an unknown presence will cause a sightseer to commit suicide. The film bounces around in time, beginning with Malorie (played by Sandra Bullock) escorting two young children, literally named Boy and Girl, to a boat that will transport them on a perilous journey down a river (blindfolded, of course). Dropped into the middle of this action, we aren’t sure of the reason for the blindfolds, but Malorie tells the children not to remove them or else they will die.

Shortly thereafter we are taken back five years for a bit of an origin story. Malorie is pregnant but considering adoption. While visiting with her sister, they hear reports from around the globe that people are mysteriously committing suicide. Not giving the reports much thought, Malorie and her sister head to an OB-GYN appointment—and that’s when everything goes terribly wrong. Glazed-eyed men, women and children are running madly through the streets, out-of-control cars are barreling into buildings, and people are committing suicide all around. The new reality has hit the United States.

This scene is chaotic and intense and did a good job of setting things up for the five-years-later timeline of Malorie rushing down the river. Among the craziness, which includes the death of her sister, Malorie is swept up and brought into a safe house occupied by a number of random strangers, which becomes her home base for much of the following five years. Time continues to jump between Malorie’s trip down the river and her time in the house, where she builds relationships with the other occupants of the house, including the owner of the home, Douglas (played by John Malkovich); Tom (Trevante Rhodes), who becomes an eventual love interest for Malorie; and another pregnant woman, Olympia (Danielle Macdonald).

We aren’t told a lot about what exactly causes people to kill themselves whenever they look outside, but some of the rules set up are: if you stay indoors, with the windows covered completely, you’re safe; if you do venture outside, you need to walk around blindfolded or with your eyes closed (or in the case of Malorie’s trip down the river, under a blanket). People who don’t cover their eyes eventually become entranced by something (we’re never really shown what they see), their eyes glaze over, and they commit suicide almost immediately.

We are also shown that some people are not driven to suicide but, instead, walk around hunting others. So, there’s that to worry about as well! It’s not explained what causes certain people to survive as one of these “hunters,” but if I were to guess, it would be that they already had a bit of evil inside before everything turned. One of the scariest scenes in the film is when a man calls out to Malorie along the river. Instead of being relieved to find some help in her journey, she is rightly suspicious of the man. He wades out to the boat and Malorie manages to fend him off, protect the children, and then slice up the evil man—all while blindfolded.

Going into watching this movie, I was interested to see how scenes like this would translate to film. Part of the magic of reading Bird Box was that you, the reader, were just as blind as Malorie. The only thing you could “see” was whatever she described. The film helps bring this feeling across by showing scenes “from behind the blindfold,” where you can hear what’s going on but all you can see is a little bit of light breaking through the mask. Using this technique, I felt the film still did a good job of creating tension. Even though we, as viewers, can see the man approaching the boat, it’s still thrilling to watch Malorie deal with him blindfolded.

When setting out to write this article, I promised myself to not make it too much about comparing the book and movie. (Mostly because I have a terrible memory and can’t remember a lot of the details from the book.) But I did want to point out one comparison in which I thought the film improved upon the book. Eventually, the star-crossed house dwellers decide they need to go out on a supply run. The crew covers the windows of the SUV in the garage and ventures out by car. I found this to be one of the most implausible parts of the book, as Malorie creates her own map via trial by fire, taking multiple trips to chart out her course.

In the film, Malorie and Co. use vehicle technology such as GPS and sensors to lead the way. Setting aside the question of whether cell networks would still be up and running to power the GPS and how they were able to get the vehicle back into the garage when they returned, the use of the technology makes the ability to drive without sight more believable. (Vehicle technology was not a widespread feature at the time the book was written.) I thought the blind drive also presented a great deal of tense uncertainty. Another scene I thoroughly enjoyed was when Malorie and the children encounter the rapids on the river, which was just plain cinematic fun. The thought of going through rapids on a boat while blindfolded gives me extremely high levels of anxiety, and this scene definitely had me on edge. 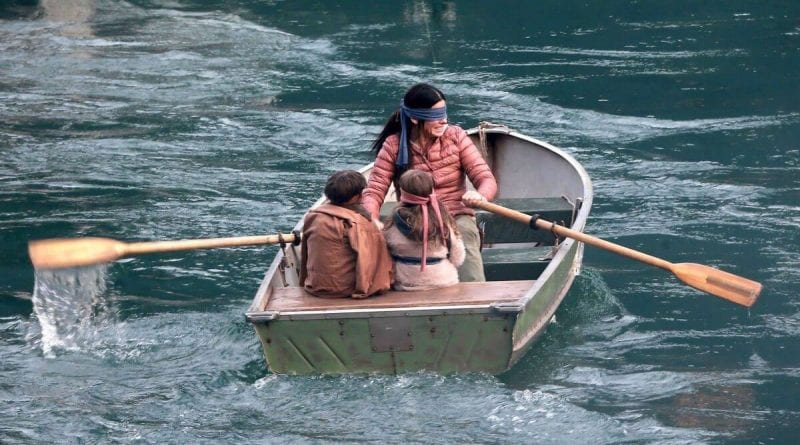 Part of the mystique of Bird Box is that we are never shown exactly what the people see that is causing everyone to commit suicide. Is it a monster? Is it a ghost? Is it an alien invasion? Not only are we never shown what the “presence” is, but we are also never given much of an explanation either. Some people may find this frustrating, but I think it works well. To me, leaving it up to the audience to use its imagination is scarier than showing some CGI-created monster.

We are given some clues based on the victims’ reactions. Many blurt out comments about a loved one; for example, in the initial scene of pandemonium, we see a woman walk into a burning car because she thinks her dead mother is in there. So, I lean toward it being a spiritual presence, possibly a devil-type entity that entices people to join others who have died.

One of the late-coming housemates, Gary, before going off the deep end and opening all of the windows in the house and killing many of the inhabitants, displays a series of drawings. I interpreted these sketches as Gary’s vision of the presence, and they all had a bad-spirit/monster feel to them. But really, we don’t know for sure what the presence is—and I think it works much better that way.

So, how did Bird Box become such a well-known commodity? Was it simply a matter of Netflix doing a great job of marketing and creating its own buzz? Was the cast, which featured bigger stars like Sandra Bullock and John Malkovich, enough to get a lot of people watching (and talking)? Maybe we can relate more to post-apocalyptic horror movies these days. A similar-concept movie, A Quiet Place, also is quite popular currently. Maybe when everything in real life can seem kind of terrible, it is now easier to accept the possibility of the unfortunate circumstances found in Bird Box.

Overall, is Bird Box worth the hype? I definitely enjoyed it and think it’s worth watching if you like post-apocalyptic settings and mysterious horror. But it’s not a perfect movie. Having Malorie’s OB-GYN show up at the end of the film, living in the school for the blind, seemed forced and unnecessary. I thought John Malkovich was underutilized and found it unfortunate that such a talented actor played a character locked in a garage and unable to really do much for a long period of time. And that rapids scene that I loved so much? I mean, the chances of someone being able to navigate those rough waters while blindfolded and not drowning is next to nothing. (But I will overlook that because ultimately I was entertained.)

Bird Box might be a hot item now but, even though I enjoyed the film overall, I don’t see it becoming a classic that people talk about for years. Maybe I’ll be proven wrong, but I think the film is more likely to be a flash in the pan. 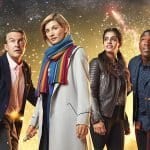