Let the bodies hit the floor. In the penultimate episode of Ray Donovan’s sixth season, “Never Gonna Give You Up,” a bloody path continues winding to an end. It’s the Donovans vs. the NYPD, and on the line is the life of Ray’s daughter, Bridget.

The last couple of episodes have been fun romps, but they have masked the achilles heel of this season so far. What have we really learned about Ray that we never knew before? He is still the suicidal, homicidal, won’t-back-down brute-in-a-suit that jumped off a building and into the East River. Last season we learned what his wife, Abby, really meant to him, and that Ray doesn’t know how to love someone until it is too late. Ray has been caught up in a neo-noir dream ever since where he is the little fish swimming among sharks. We know his street smarts are unparalleled, yet I feel a little empty-handed and desperate headed into these two final hours.

Ray Donovan, it is time to impress me. 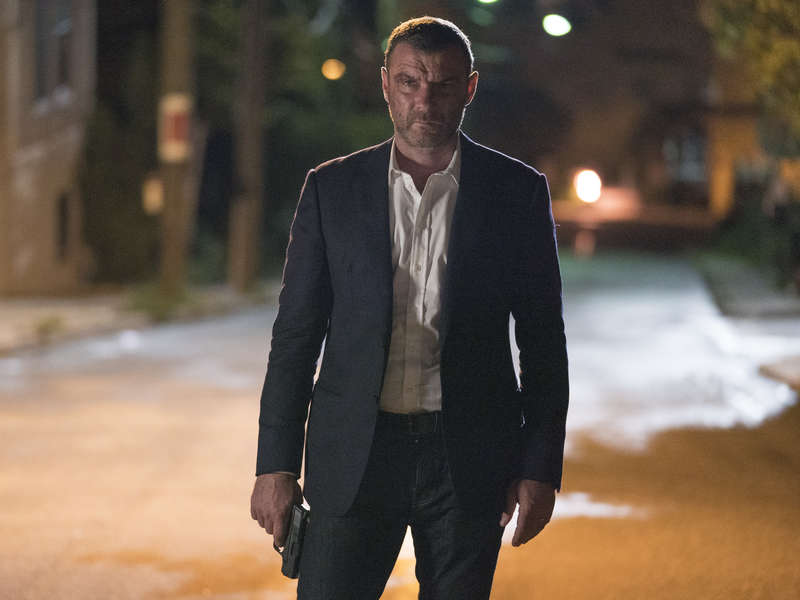 Ray’s makeshift best friend, Mac, has disappeared with Bridget, and the recording of Mayor Ed Feratti ordering a hit on a judge is now in the open. At any moment, Bridget could be killed by the mayor’s thugs, and Ray’s calm demeanor is toast. With Mickey and Darryl at his side, they head to Mac’s house for clues.

Over at Mac’s estranged wife’s house, Officer “Rad” Radulovic has Mac’s estranged wife at gunpoint, threatening a point-blank execution in front of Mac’s son. He wants to know where Mac and Bridget are, a moment more uncomfortable than any other this season. It’s evident that Mac’s wife has no idea where he is, and Rad runs off into the night without further incident.

As Ray, Mickey, and Darryl are combing through Mac’s deserted house, Rad appears out of nowhere and pistol-whips Darryl. Right before Ray unloads every bullet in his glock, straight into Rad’s chest. Darryl and Mickey stare in astonishment. Mickey’s face expresses true regret, and a realization: Ray just killed a cop, a cop that would have been a valuable bargaining chip to get Bridget back safe. This impetuous decision won’t come without a cost. 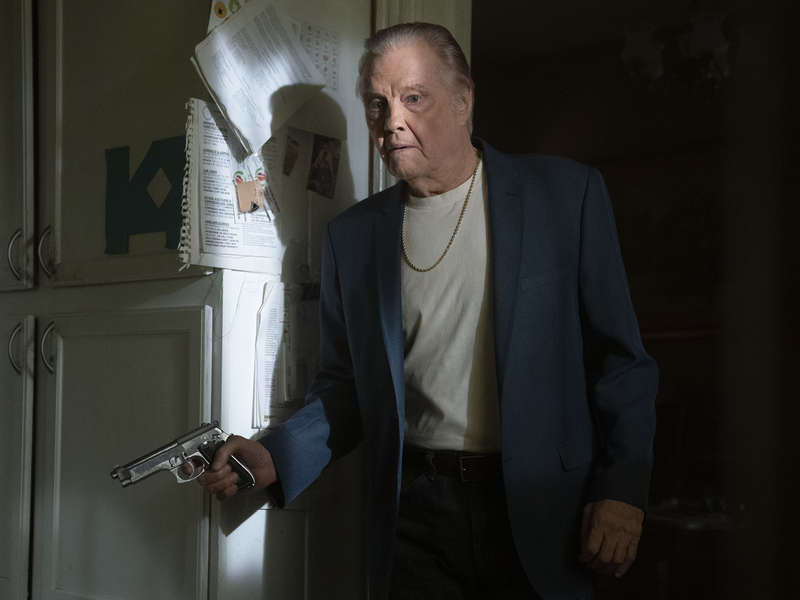 Ray Donovan is a smart guy, which doesn’t explain why he is trusting Smitty of all f*cking people to transport a gagged and bound Officer Bianchi to Aunt Sandy’s living room for safe-keeping. In my favorite moment of the episode, Sandy goes down memory lane and tells Smitty about a young Ray Donovan. The boy who would get so mad that he would either slam his head into a wall or hold his breath until he passed out. Ray was always the one mom worried most about. (How about a spin-off series following the Donovan’s through the sixties, seventies and eighties? Sign me up.) Sandy then kills the nostalgic mood by describing an incoming bowel movement.

Ray gets the bright idea of using Rad’s cell phone to call Ed Ferrati. Ferrati plays dumb and claims he knows nothing about Bridget’s disappearance, and hangs up on Ray. The heat is on.

Mac is draining a bottle of whiskey by an anonymous pier. Ferrati calls him, pissed off that he removed Bridget from the designated basement. Then, Ferrati orders Ray’s head on a plate. Right as Ray is vomiting into Mac’s kitchen sink, Mac calls him and summons him for a secret meeting. Now is the time for Mac to show his true colors.

Oh, Bunchy. Bunchy, Bunchy, Bunchy. He is sitting in an interrogation room refusing to talk to the FBI. The slightest bit of cooperation would help Bunchy, and he refuses to budge. Attacking the cop and freeing Mickey, the two armed robberies, and aiding and abetting a fugitive will likely have him locked up for thirty years. Good thing the FBI never found out he kidnapped his own daughter. Bunchy claims he has no idea where Mickey is, and even if he did, he wouldn’t rat on his own father.

By the time Aunt Sandy returns from the restroom, Bianchi has freed himself. He attacks Sandy, and Smitty takes a fire poker and impales Bianchi, immediately killing him. That’s two dead cops in the episode, if you’re keeping score. The wrought-iron steel hits the hardwood floor, preventing Bianchi’s body from slamming into the ground. Ick. Smitty throws up, and Aunt Sandy picks up the cigarette she dropped for just one more hit.

Ray meets with Mac by the water, demanding to know where Bridget is. First, a confessional that Ray doesn’t want to hear. Mac did the right thing, removing Bridget from certain death when the news about Ferrati hit. He only played along with the mayor and Rad’s scheme to buy more time for Bridget’s life. He betrayed Ferrati and saved Bridget because Ray has been the only friend to take him seriously, the only person to ever truly believe in him. Mac is ride or die with a tear in his eye, and none of the words seem to reach Ray.

Mickey and Darryl are still at Mac’s house. They look in the kitchen and a smeared trail of blood leads them outside. Rad did not rise from the dead… another Ferrati henchman that Mickey shot last week didn’t die. He was just shot in the face. Darn. They find him crawling away outside and Mickey stops him, demanding to know where Bridget is. The man chokes on his own blood, and a third cop dies in “Never Gonna Give You Up.”

Terry Donovan is just trying to get some shut-eye and someone won’t quit pounding on his door. It’s the FBI. Bunchy won’t talk, and Terry takes matters into his own hands. Terry sits across from Bunchy in the interrogation room and begs his little brother to make a deal. Bunchy indicts the entire Donovan family tree, questioning how his daughter or Bridget or Conor could ever be normal. He protests that the family is indeed f*cking nuts, cursed, and an extended prison sentence is the best thing that could happen to him.

Mac leads Ray to a seedy motel. Ray runs into the designated room and finds Bridget handcuffed to a sink. Outside, Mac calls his estranged wife, who is irate over Rad interrogating her at gunpoint. Neither she nor Mac’s son ever wants to see him again. She gives him a “f*ck you” and hangs up. Domenick Lombardozzi paints a haunted face on Mac that tells us everything. Mac has lost his family, Ferrati is going to kill him, and he has a hand in the kidnapping of his best buddy’s daughter. Ray and Bridget’s reunion is interrupted by a gunshot outside, and they find Mac’s driver-side window covered in blood. Ray shows hardly any emotion at the sight of his dead friend, and is simply relieved to have Bridget safe and sound.

Not only is a fourth cop dead in this episode, it is one more relationship that Ray Donovan could have salvaged, but didn’t. It was his wife last season, and now it is the only male companion we have ever seen him warm up to. Mac was a distinct voice and an unlikely delightful fit in the ensemble (quite a feat in this series), and it’s a shame Lombardozzi won’t be joining the cast again next year. Of all the people to commit suicide this season, my money was on Bunchy.

Judge Scholl pays a visit to Mayor Ferrati in the confines of his bowling alley lair. Ferrati writes the leaked recording off to the Hollywood smoke and mirrors of Sam Winslow. Ferrati vows to discredit the evidence and retain his title of New York mayor. 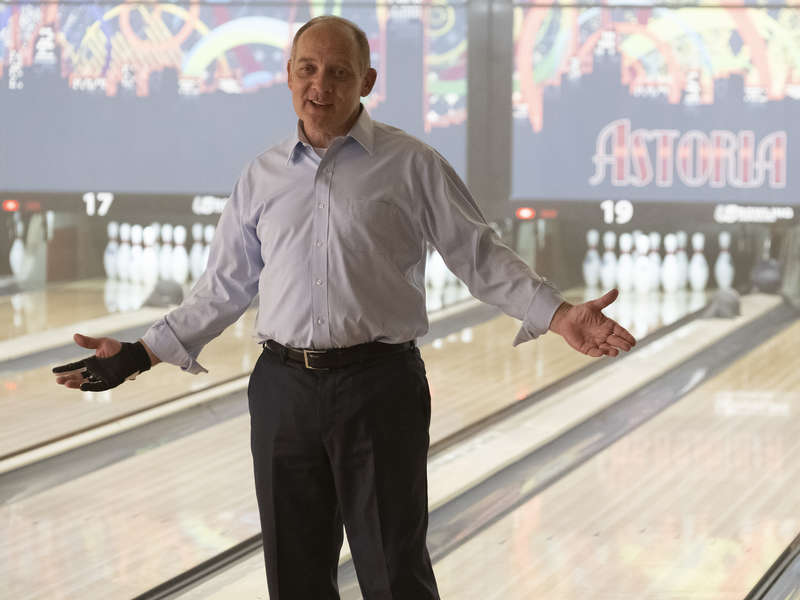 Ray now has Bridget in his passenger seat, and she only wants to see her fiancé, Smitty. She stares out the window, then takes her father to task once again over his suicide attempt. Was it because of Abby? Something else? We know the answer. Ray is unable to love anyone, least of all himself. Ray is the reason Bridget was in peril, and by default, the reason Mac is dead. That fact doesn’t seem to have sunk in yet.

Darryl and Mickey drive off into the night, wondering how to dispose of the dead cop in their trunk. They get the news from Ray that Bridget is safe, and then crank up Rick Astley’s “Never Gonna Give You Up.” The sight of Mickey and Darryl jiving and singing along to the greatest rickroll of all time is pretty wonderful. But not as wonderful as Ray singing Bob Seger’s “We’ve Got Tonight” with Hank Azaria at a karaoke club back in the third season. Mickey and Darryl arrive at Aunt Sandy’s. Mickey requests a stiff drink and a backhoe for the multiple corpses they need to bury.

Terry talks to the FBI agent and refuses to let Bunchy throw his life away. He strikes a deal that he will deliver Mickey Donovan to the feds in exchange for a softer sentence on Bunchy. Terry stumbles off into the night, a man on a mission, and more importantly the most compelling wild card of next week’s finale.

In front of Aunt Sandy’s house, Ray is sitting in the car with Bridget, fighting off a possible yet unlikely emotional display. Bridget won’t quit pushing, testifying that all of this behavior will lead to him being found dead in a black sedan some day. Preach it, sister. Ray watches Bridget and Smitty embrace, before getting back into his Caddy and driving off. Excuse me, Ray? Don’t you at least need to help your brother and your dad bury these dead cops?! Ray?!

With one episode left this season, the most pressing drama swirls around every Donovan not named Ray. With Bridget safe and Ferrati outed as a crime lord, I’m not quite certain what Ray has to do, except wash the blood off his hands or possibly avenge Mac’s death. Continued employment under Sam Winslow is not that appetizing, and a healthy romance with Anita Novak seems unlikely. Will Lena and Conor drop in and further challenge Ray over his shortcomings? Is Mickey really not going to exact revenge on Ray after all that has happened? Could the ultimate destination of the season actually be Terry against Mickey? That would be a refreshing surprise, but I’m betting on a no-holds-barred battle royal, including every able-bodied Donovan in the fray. Even Smitty.