Who watches the Watchmen teaser? HBO has been pretty mum about the when, where, and why surrounding its new adaptation (and in this case, possible continuation) of Alan Moore’s groundbreaking graphic novel. The official Instagram account has been bare, barring unsettling pictures of police officers in yellow masks.

But, this week we got a trailer for all the returning and new shows, and we got a tiny glimpse into a new yet familiar universe where masked superheroes try to save the day but fall short.

First up: will the real Silk Spectre stand up? Is this an ageing Sally Jupiter or her daughter Laurie post the events of the graphic novel?

Next up, new masks and villains? The stripped-back costumes and face-hugging masks are an unsettling combo.

But then there’s someone else still lurking. A bit Rorschach, no? It really depends on what you see, though.

As a fan of the graphic novel who thought the film was a mostly solid homage to the source material, this feels both off-putting and oddly exciting. If it’s a re-imagining, I’ll enjoy scanning for deep-cut references to the source material. If it’s a continuation, I hope for a deeper dive into the dystopia that Moore imagined. Either way, one thing is for sure: he won’t put his name on it. 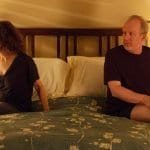