Welcome to What’s the Buzz, 25YL’s new feature where members of our staff will be providing you with recommendations on a weekly basis. In our internet age, there is so much out there to think about watching, reading, listening to, etc., that it can be hard to separate the wheat from the chaff, filter out the noise, or find those diamonds in the rough. But have no fear! We’re here to help you do that thing I just described with three different metaphors. Each week a rotating cast of writers will offer their recommendations based on things they have discovered. They won’t always be new to the world, but they’ll be new to us, or we hope new to you. This week’s entries come from: Caemeron Crain, Ali Sciarabba, Rachel Stewart, Bryan O’Donnell, and Lindsay Stamhius.

Caemeron: I recently discovered Syfy’s Happy! (based on the Grant Morrison comic) on Netflix. The show has a weird tone. You might love it, or you might hate it. That kind of cult status is clearly what it is going for. Christopher Meloni stars as Nick Sax, a down on his luck ex-cop/hitman who can kill his way out of any situation if he cares to, and Patton Oswalt is the voice of Happy—a blue flying unicorn who guides our hero along his way (he’s the imaginary friend of a little girl he claims is Sax’s daughter). It’s silly, but the show is also very dark. Don’t watch it if you aren’t a fan of black humor and over-the-top violence.

Patrick Fischler (who’s name in my mind should be enough to recommend the show in and of itself), plays a torturer for the mob named Smoothie, who takes a little too much joy in his work (to great effect). And the show in general is just a joy to watch, if you’re into something where the first scene is our protagonist fantasizing about killing himself with two guns and then dancing around with blood spurting out of his exploded skull. If that sounds like it’s not for you, maybe give it a pass, but I thought the first season of Happy! was hilarious., and look forward to the possibility of seeing more.

Ali: I decided to check out You, which I missed the first time around when it aired on Lifetime but has recently come to Netflix. You is not for everyone but I found it incredibly entertaining for what it was, which is basically what would happen if Gillian Flynn wrote a Gossip Girl AU in which Dan Humphrey was actually depicted as the manipulative loser he was. You centers on Joe (Penn Badgley), a psycho cyberstalker who manipulates women into relationships by making them believe he’s a Nice Guy. He has his sights set on Beck (Elizabeth Lail), an aspiring writer in a New York City MFA program, who is just as irritating as one might imagine. But just because she’s also terrible (albeit in a harmless way) doesn’t mean we root for Joe. That’s the thing that makes You work: all of the characters (minus a few secondary characters) are insufferable. So while you don’t want Joe to succeed, it is easier to watch him do all the terrible things he does because you don’t want any of the rest of them to succeed either.

Watching You, I did have to wonder: in 2019, do we really need a show about a psychotic guy manipulating and violating women, told (mostly) from his perspective? Is it really necessary to watch ten episodes of this man believing that he is some sort of White Knight riding in to save the woman he claims to love (and ruining her life in the process)? I can only imagine what Red Pill Reddit might have to say about Joe and his tactics (and I don’t want to think about it for too long because it makes me physically ill). What I can say about You is that it is an entertaining watch for people with enough common sense to see that Joe is an objectively terrible and dangerous man—an over-the-top, caricature version of all the Nice Guys out there who think they know women better than women know themselves. In the age of social media and dating apps and Google providing our personal information to strangers with a few keystrokes, if anything You is a ten-hour PSA to password protect all your devices and be careful what you post online for the Joes of the world to see. 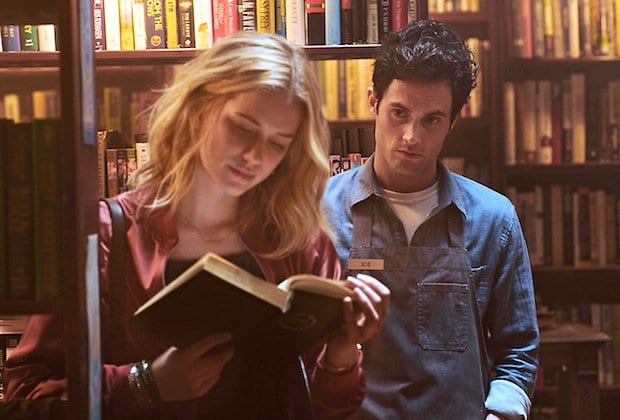 Rachel: While I remain staunchly Team A Star Is Born, the Vox Lux soundtrack is growing on me over repeated spins. Can anyone else write depressing yet dance-able and addictive pop music like Sia? I think not. (I’m still not over “Chandelier” in all its drunken and wailing-in-the-shower glory.)

And since Vox Lux is a fractured portrait of different types of fame (and infamy) in the 21st century, the lyrics act as the right mix of pseudo-parody and top 40 bop for the film’s pop star Celeste. All the boxes are checked throughout the soundtrack’s nine original tunes: fame, love sex, addiction, and redemption. Natalie Portman’s screaming on “Sweat and Tears” sounds like a lost Lonely Island cut (never forget Natalie’s mad rap game on SNL) but “EKG” is where the glittery pop magic is for me.

“I come alive, I hit flatline
Until you love me
Feel me, check the EKG
My heart’s like a house beat”

Bryan: Post Animal is a Chicago-based psych rock band that I came across recently and am really digging—and they just so happen to include guitarist Joe Keery, who plays Steve in Stranger Things. And while that may seem like a gimmick to get people to check the band out, I really do like their sound. Think White Denim meets Tame Impala. I’ve had Post Animal’s 2018 release When I Think of You in a Castle on repeat for the past week or so, and I have to say that it’s a really solid top-to-bottom album. Its opener (well technically the second song after a short instrumental intro), “Gelatin Mode,” morphs from a full-on rocker to a Pink Floyd-esque dream sequence to a proggy conclusion. I love it. Then the album ends with a bullet, with “Dirtpicker.” I have a hard time finding a song on the album I don’t like, and because the band alternates singers among all of its members, the songs sound different and fresh. The band is in the midst of a U.S. tour, so maybe check them out if they come to a city near you. But don’t expect to see “Steve from Stranger Things“—he doesn’t tour with the band.

Lindsay: This week I’m here to shine a spotlight on the new (to Netflix, anyway) sitcom series Derry Girls. Set in Derry, Northern Ireland in 1992, the show follows a group of five friends (well, four girlfriends and one of the girl’s cousins, whom no one really likes) at a Catholic girls’ school as they navigate the trials and tribulations of life during The Troubles. But it’s hilarious! The five main actors are phenomenal in their roles (pay particular attention to Louisa Harland as Orla—she’s an absolute space cadet and it’s glorious!) The show lampoons everything from teenagers and sex to Catholicism, and UK/Northern Ireland relations. Each episode is the standard 22-minutes long, making this perfect for casual watching (but you’ll want to savor this; there are only six episodes available online!). Derry Girls originally aired on Channel 4 in the UK, and was recently picked up by Netflix. A second series has aired in the UK already; talk is underway about a third season and possibly even a film—we’ll update you if any of this comes to pass.