I recently had the pleasure of speaking with actor Michael Beasley, who is quickly making a name for himself in Hollywood. Called “the King of Hollywood South” by none other than Denzel Washington, Michael has appeared in well over 60 productions in less than ten years time. In this interview, we got to discuss some of his more recent roles, some behind the scenes stories & more!

AG: You have appeared in over 60 projects in a relatively short amount of time. What’s life like for such a busy actor?

MB: Life is good. There’s never a dull moment because I get to work with a lot of great actors and learn from them; how to have a successful career both on and off screen and how to grow as an actor. I had a plan when I first got into the business and I just executed the plan to get to where I am now and still have a lot I’ve yet to accomplish. I’m still excited every day to get on the set.

AG: What are the goals you still haven’t accomplished?

AG: You received pretty high praise from Denzel Washington who called you “the King of Hollywood South”. How did that make you feel?

MB: The story behind it is pretty crazy. I first worked with Denzel when I read for him for The Great Debaters. He cast me in my first speaking role in a movie. Since then, I’ve worked with him in Flight and 2 Guns. On the set for 2 Guns, he said “So Mike, you working your way out west?” because I’m based out of Atlanta. I told him I was trying and he said “You’re like the King of the South” and I told him “I’m trying to be the King of the World” (laughs). A little bit later, maybe two weeks later, I started reflecting on what he said and it hit me that he had seen me in something to say that, not just working with him on these films. It was pretty cool that he said that, pretty surreal.

AG: You’re coming off a pretty big role in Escape at Dannemora. How would you describe that experience?

MB: Nothing short of amazing. Getting a chance to work with Ben Stiller, who’s a phenomenal director and he’s an actor’s director. He would let us play. He would see a choice we would make and ask us why we made it. We’d explain it and he would let us try it our way and then try it his way. So we got to really collaborate. Then working with Benicio Del Toro, I’ve always been a big fan of his. For him to come to me in the very beginning and say “We’ve got these scenes coming up. What do you think about this, this and this?’ and I’m like “You’re asking me?’ (laughs). Just tell me what I’ve gotta do man (laughs). Then watching Patricia Arquette work and Eric Lange and Paul Dano, it was an amazing experience because it was like Acting 101. I got to see them work and then talk to them. Benicio in particular, I asked him things like “What would you tell your 25 year old self that you would change” and he told me what books to read, movies to watch and stuff like that. To get that kind of feedback and to work with these guys was nothing short of amazing, and it showed on the screen as well. Everybody got along and I’ve been blessed to be on good sets, but not everyone is, especially with that kind of star power. There can be a lot of egos but not here. Everyone checked their egos at the door and it was a great experience. It was a different experience because they wanted it as authentic as possible. It wasn’t a documentary but it was a docu-series and a lot of the extras were real ex-cons. That was an experience in and of itself. Everybody did what they were supposed to do, were happy to be there and there were no problems or anything like that.

AG: Any on set stories you care to share?

MB: Those were real ex-cons in the riot scenes and real C.O’s. We were shooting at a prison in Pittsburgh that had just shut down like 6 months before. So some of these guys were actually in this prison. We’re shooting the scene, fighting and stuff like that and Ben [Stiller] comes to me and says ” Hey Mike, you good out there?” I said yeah and he said, “it looks scary” (laughs). It was kind of scary (laughs). Also, to paint a picture of the set, the main actors get taken care of pretty good at their food table. The extras don’t get the same quality of food but they do get food. It might be shrimp and lobster for the main actors and then Popeyes for the extras. On this set, the extras were going straight for the table with the shrimp and nobody was stopping them (laughs). Everyone was like “I’m not going to tell them, are you?”. Eventually someone told them, but for a couple of days they were eating real good. It was funny to watch.

AG: You’ve also had memorable roles in both Bloodline and Eastbound & Down. I wanted to ask about your experiences on both of those shows.

MB: We’ll start with Eastbound & Down. That was a dream job because we would literally laugh 16 hours a day on the set. We would laugh all day. I would wonder if they could even say these things on TV. I don’t think they could get away with some of the stuff they said today, even though it’s only a couple of years later, not with the current climate. There were many times when they had to take the camera off me because I would just be laughing. The director would be yelling my name and I would be like “I’m trying man, I’m trying” (laughs). We had so much fun on that set.

Then on Bloodline, we had an amazing cast. I wish the show had went a little longer. I recently saw Linda Cardellini and we were just talking about how we wished it lasted longer but it was a great show. For me, I couldn’t believe I was getting flown out to the Florida Keys to work (laughs). Most of my scenes were with Norbert Leo Butz and we had great chemistry together. It was a great experience. I didn’t get the whole scripts, just my scenes, and I thought I was the only one like that. When I talked to Linda last week, she said she didn’t get the full script either (laughs). My wife and I binged the show just like everyone else. I was really happy to be a part of it.

AG: You have a film in post-production right now called Miss Virginia. What can you tell us about it?

MB: It’s based on a true story about a mother in the inner city. She’s fighting to get her son away from the gangs and have a good education. She’s fighting to get her son the education he deserves so she has to go to city council and the mayor’s office to try and get these things accomplished. It comes out this year and should be a pretty good movie.

AG:  Any other projects in the works for you at the moment?

MB: Yeah, I’ll be shooting a pilot for TNT called Beast Mode, here in Atlanta. It’s with Anika Noni Rose and its based on the story of legendary boxing trainer Ann Wolfe. I’ll start working on that next month.

AG: Where can people find you on social media? 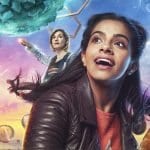