I remember sitting at the dinner table as my great grandmother chastised my great grandfather for leaving the television volume up too loud during our family dinner. I was around five years old, it was 1994. In 1994 the media was dominated by the O.J Simpson trial, and coverage of Jeffrey Dahmer being murdered in prison by a fellow inmate. Dahmer had been put in prison years beforehand and the media could have never said a word about his murder and just let him fade into nonexistence, but what good would that have done for ratings? My great grandmother wasn’t thrilled that her wholesome family dinner was being out-shined by the horrors of the outside world. My great grandfather, on the other hand, wanted to know every sordid detail of the various crimes committed. In 1994 the media was already well adept at drenching its viewers in blood, and blood was the viewer’s lube of choice, now 25 years later nothing has changed if anything we as viewers have only become more blood-thirsty.

Natural Born Killers made its debut in 1994. I was allowed to watch it with my mother crouched in wait to throw a blanket over my eyes if things got too intense, she probably just sent me out of the room at some point because I don’t remember fully watching it until I was older, not a ton older but probably around 10 or so.

I cried, I laughed, I screamed “Hey! that’s Nine Inch Nails playing!” My mother, unlike some parents, thought that me seeing this movie, and letting me try to work out everything it was trying to convey was important in teaching me the difference in what is real, and what is the media, and how the media may show me skewed versions of reality. This film gave me my introduction and early understanding of what sensationalist journalism is, how to try to spot it, and to try and avoid biased news sources. In a time where nearly everything is click-bait, it’s a decent skill to have.

The film made the rounds, people shouted and screamed in anger—some in praise. Oliver Stone tore people a brand new one upon the films inception. Viewers and critics alike raged back and forth whether or not we were at the beginning of the end of human decency when films like this one become popular culture instead of staying where they belong; in some niche genre of exploitation only viewable if you know what you’re looking for. Stone argued that if the film’s popularity brings light to an important social issue, that’s something we could easily start to work on fixing.

Years later, we know where we are. Some might not admit it, but those of us who look at the world with a pragmatic view, see that we are dipped daily into soul-crushing media bloodbath. It washes away all of our daydreams and lofty ideas of a happy society and keeps us begrudgingly trudging along, accepting more and more bizarre versions of reality. Some people rejoice in this, others are terrified. People are now often more swayed by news outlets and their opinions than they are by having an honest conversation with their neighbors, and if you listen closely enough, you can hear the laugh track accompanying these moments of frank conversation as they quickly descend into arguments about walls vs water filtration.

The most easily noticeable difference in our current society to spot in this film while watching it years later is social media. Can you imagine the events that take place in it, taking place now? The scenes could still happen but they would play out a bit differently. Mickey and Mallory would have been on every available live stream of social media immediately. When Mallory stops at the service station and starts to make her way with the attendant, there would have been at least 4 teenage girls there to film her for their insta feeds, 3 grandmothers filming in portrait mode for Facebook, two randoms filming the NSFW behavior for Reddit, and a partridge in a pear tree. We’re given a real warning with Wayne Gale though, he’s basically a kid shouting “world star” in the background of a viral video where a couple of drunk kids nearly murder each other in a fight about who has the best Mickey and Mallory meme collection. That may be the strangest sentence I’ve ever put together that actually makes sense.

I work with people and have friends who don’t want their kids to watch certain movies, it seems like a silly battle for them to be fighting though when they’re more than happy to let their children watch the evening news, and have access to all manner of social media. Where people are reported being raped and murdered, often not in that order, bombs going off in every part of the world, and drugs and humans being trafficked around like branded cattle. That’s okay to watch…A movie though, that’s too damn far.

The film blends together real life moments of confusion with a drug-addled sitcom vibe. I remember watching the film when I was young thinking “They don’t seem just flat-out crazy, they seem angry and broken. Everyone seems nearly as crazy as them anyway.” There aren’t many people who can look at Mallory’s upbringing of a rapist father, and a mother who at best wears rose-colored lenses, and not say…”Yeah, maybe kill those abysmal wastes of life.” You don’t want to say it out loud, nor will many people, but when you see Rodney Dangerfield’s character grope his daughter, then tell her to go get clean for him, beating this guy to death with a leg of lamb doesn’t seem like an overreaction. It’s okay to admit it. It’s not just okay, it makes you empathetic. Empathy is not feeling sorry for people, that’s sympathy. Empathy is trying to understand how someone must feel in a situation that you’re not currently in.

As I watched this film a few days ago, after not seeing it for a nearly a decade I thought, people are obsessed with them because of the media, the media is obsessed with them because they’re an amazing source of viewers. People still would have followed the story of Mickey and Mallory, even if it was just printed in a newspaper because most of us humans are naturally curious creatures. Having constant informative visual update and reminders of something though makes us start considering it more important. So if a couple is going on a murder spree through the states and it’s constantly reported on, we’re going to no doubt be talking about it at the water cooler, and perpetuating the media cycle. No one throughout the film truly stops and says, what are the main characters going through? How did they get here? What is going on really? Not even the main characters themselves—though they have small moments of hesitation—those fade quickly, as they know they even have a fan base and are considered anti-heroes to many people, so why not just carry on doing what they do?

The film reminds us, that we all have the ability to go mad or commit heinous acts. After all, the film is about two young people who snap when they come to terms with their own inevitable self-destruction and figure, why not take as many people down with them on their way? The background they are given sets a stage of brutality and deviance. If you were excluded from all moments like those in your childhood you were extremely lucky. I grew up in a poor and in a multi-generational household. Fights were more than common, it was stressful to say the least. But I was lucky to have been born into an extremely loving family, just a poor one that worked constantly, so stress was always the main ingredient in our explosive family soup. I was shaped by my genetic predisposition, and environmental elements, as we all are. Extreme environmental surroundings clearly can overcome genetic predisposition, for better or worse, sadly in this film we see what happens when two people who may or may not have had such predispositions to psychotic tendencies are brought up in bleak and violent circumstances.

Not only does this film hold up 25 years later, but it will also easily hold up to the entire test of time. Even if we do somehow accomplish reigning in the sensationalist media, the movie still displays what the media was like in the ’90s and shines a light on how it affected society. The issues splashed across the screen then will most assuredly follow us into the future. There is no escaping Mickey and Mallory and in this age, it’s nearly impossible to do anything noteworthy without it being filmed and go viral with a little laugh or poop emoji in the corner of the video. Mickey and Mallory after all, are a somewhat hyperbolic reminder of how bent and broken our society and Justice system was then, and still is. People like to point out that we’re living in one of the safest times in human history, which is a wonderful thing to think about, why we are determined to show humanity in the worst possible light though is not a fun question to ponder. When I go to my day job, someone almost always puts on one of those live Cops shows, and then laugh and jeer at the people getting arrested, busted for drugs, and running from the cops. I’ve even laughed at some of the more ridiculous moments on the shows that I’ve seen, I’m not trying to paint myself as a saint, I do try to actively avoid shows like this though because they often give me anxiety, especially shows like Law and Order or any NCIS types, but I’ll sit down and watch 30 horror movies in a row and become relaxed, even as I’m falling on the floor after a well-timed jump scare. When something is so clearly not real, I watch it with the same mindset I’d watch a Harry Potter movie with. 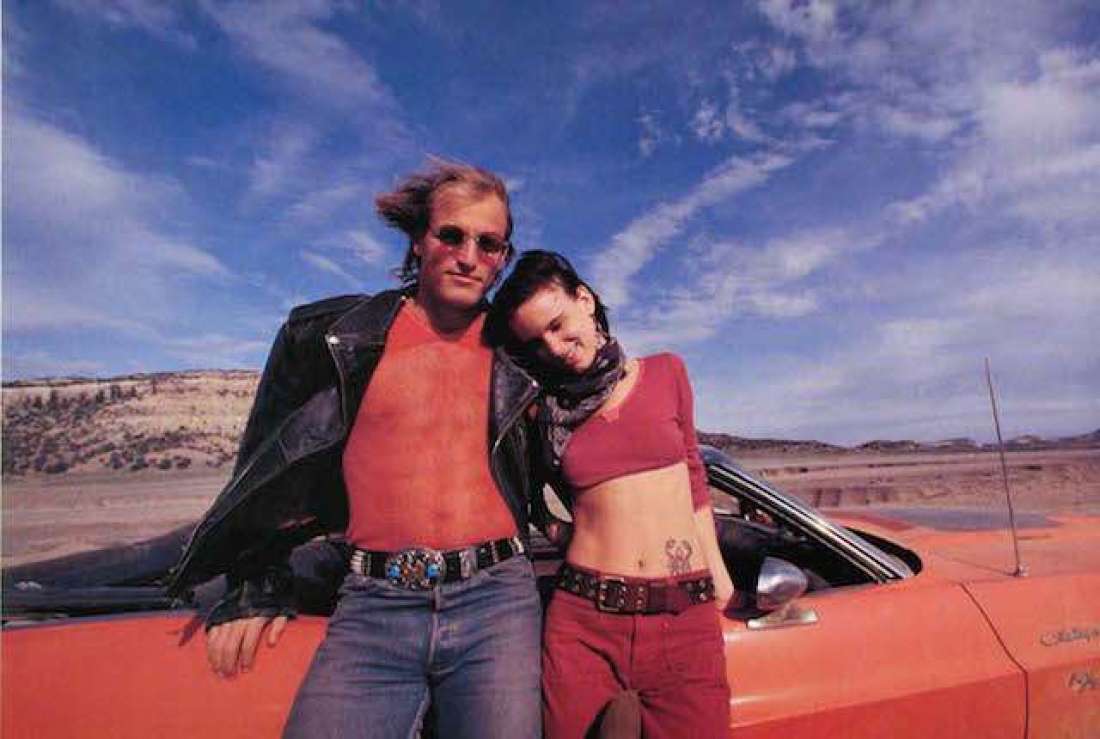 Natural Born Killers definitely induces anxiety though, as it’s nearly a mockumentary that some not so distant generation could watch that explains what lead our society to happily watching The Running Man every Friday night at 9pm EST, 8 pm CST on Fox, proudly brought to you by Bounty, the quicker picker upper! Now stay tuned for a word from our sponsors.