Faith: The Final Frontier. That’s essentially where Star Trek: Discovery seems to be heading in Season 2. Science vs. Faith. Proof vs. Belief. Empirical knowledge vs. Spirituality. Where does one end and the other begin? How can either be justified in the face of the other? These are the questions raised by the second episode (“New Eden,” written by Sean Cochran, Akiva Goldsman, and Vaun Wilmott, and directed by Commander Riker himself, Jonathan Frakes). Star Trek rarely strays into religiosity for very long, other than an episode here or there—the major exception being Deep Space Nine, which used the religious beliefs and sociopolitical turmoil of the Bajorans as a basis for much of its storytelling, to the point of making Captain Sisko the emissary of the Bajorans’ gods, the Prophets. Discovery looks to be right on par with DS9 with its mix of science-based and belief-based plot.

Discovery is on a mission to solve the mystery of seven red bursts that appeared in perfect synchronization across the galaxy and then almost immediately disappeared again. In “New Eden,” just like in the first episode, one of the pulses becomes stable just long enough for Discovery to track it, and they determine that it’s in the Beta Quadrant. For anyone wondering, that’s a really long way away—at top speed, about 150 years. As Captain Pike puts it: “My unborn children’s children would be lucky to get there.” But Commander Stamets reignites the “spore drive”—that weird technology that lets Discovery “skip across the universe on a highway made of mushrooms” (trust me, it’s not as goofy as it sounds)—and the crew find themselves orbiting a ringed planet 51,000 light-years away. What they discover is a human colony 200 years old—that’s long before warp drive was invented, so it’s pretty much impossible for these people to be here. And yet, here they are, congregating in a church in the belief that Earth was destroyed in World War III, two centuries earlier.

The science/religion debate permeates this episode in both expected and surprising—but always thoughtful—ways, most notably in a difference of perspective between Captain Pike and Commander Michael Burnham. Pike seems to ascribe divine qualities to the humans’ presence in the Beta Quadrant, arguing that an Earth colony that could not possibly have traveled to the other side of the galaxy had to get there somehow. If not by modern methods, then how? Burnham, on the other hand, is hesitant to interpret motivation from the unexplainable phenomenon.

Later, during an away mission that includes Lieutenant Joann Owosekun (so the trend of the B cast getting increased screen time this season continues from the first episode), Burnham queries the colonists on whether or not scientific explanation has been sought for how the original settlers came to this planet (there hasn’t been: “We don’t need proof, we have our faith”), while Pike meets the colonists at their level, acknowledging their beliefs and speaking in terms they understand. The two officers become a bit more entrenched in their positions, however, when the Prime Directive comes into play. The colonists are descendants of settlers who were transported to a world they call Terralysium, 200 years earlier. Because the original colony comes from a time when interstellar travel was not possible, and the descendants have essentially remained at the same technological level ever since, they qualify as a pre-warp society, and therefore the Discovery cannot influence their development in any way. But one of the colonists, Jacob, has sussed out their identities. He guesses rightly that they come from Earth and that they travel in a starship. Burnham wants to tell Jacob that he is right, essentially to save him from ignorance and reward him for his forward thinking, while Pike reiterates their responsibility to General Order 1. I will admit that the Prime Directive, and debates about its application and interpretation, has always been one of my favorite Trek topics, so I found it quite engaging to have that be such a factor in this episode.

At least one mystery is solved by the end of the episode—the original colonists were transported to Terralysium by a Red Angel that appeared just seconds before bombs would have wiped out a small group of people cowering in a church. This intriguing revelation only serves to raise more questions: Why did the Angel select this one group of people to save, when over 600 million people died in the war? Why did it transport them so far away? And most importantly, why did the red bursts lead Discovery to them? Both times that Discovery has followed the path of the bursts, it has been led to someone who has needed saving from imminent danger—in the first episode, it was to rescue Tig Notaro’s new character, Jett Reno, who is stranded on an asteroid that’s about to be destroyed; in this case, radioactive debris from the planet’s rings is about to crash into the planet, causing an extinction-level event. Are the bursts, in fact, leading Discovery to where it needs to be, implying motivation as Captain Pike suspects? Are the bursts and the Red Angel related? If so, why bring a starship across the galaxy when the Angel could just move the colony again?

While the issue of the colony is being dealt with by the away team, there are two other things going on. The first is further revelations about Spock’s current whereabouts and the state of his relationship with Burnham, as well as his connection to the bursts. Burnham is estranged from Spock and hasn’t heard from him in years and is confident that he won’t respond to her now. We’ve known since the beginning of the series that Burnham was raised in Sarek’s house as a half-sister to Spock. It’ll be interesting to see how this relationship develops over the rest of the season, and if things between them will be left in such a way that it warrants him never speaking of her again for the rest of his life. But the central tenet of the season is going to be Spock’s knowledge of the bursts and how he knew of them before anyone else in Starfleet.

The other thing happening in this episode is the dead people. We knew from last week’s episode that Stamets had seen his deceased partner, Hugh, while he was navigating the mycelial network, and in “New Eden” he relates the situation to Tilly. After being injured in an accident in a storage bay, Tilly is visited a couple of times by a young woman who helps her figure out a problem. At the end of the episode, the woman uses a nickname that Tilly hasn’t heard since Junior High School—”Stilly.” Upon searching the Federation database, she discovers that her schoolmate had deceased years earlier. So we have two crewmembers seeing persons from their past who are no longer alive. The obvious commonality between Tilly and Stamets is that they’re the two people who work most closely with the spores. As Stemets describes them to Tilly, “fungi are the universe’s recyclers; nothing is ever truly gone—it’s why life is eternal.” Does that mean that there’s life after death in some form? Or is some other kind of manipulation going on?

“New Eden,” probably more than any other Discovery episode yet, felt like traditional Star Trek. With debates about the Prime Directive, a landing party visiting a pre-warp colony, a continued ensemble feel amongst the bridge crew, and the ship in orbit trying to save a colony on the planet that has threatened the safety of an away team, this felt like good old proper Star Trek, and is one of the strongest episodes of Discovery so far.

Next week (January 31), we will see the return of the Klingons in “Point of Light.” 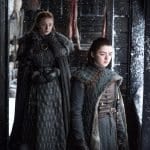