In the 2018 Shudder film, Revenge, written and directed by, Coralie Fargeat, the audience is given a new spin on what might otherwise be a brutal and redundant storyline.

I’ve always been attracted to films that have something a little wild about them. Revenge offered a lot of what I usually enjoy in a movie. It had a feeling of suspense mixed with a hint of surrealism and it was bloody. Our lead character was barely dressed and a real badass with a gun, but there was also something deeper in Revenge. Outwardly, it is a gory film about a woman getting her literal revenge on three men that assaulted her. Inwardly, Revenge dares to provoke provocative thoughts about the dangers of the male gaze—especially in post #Metoo times. Rape scenes can be hard to watch; they’re often cringe-worthy and disturbing, but that doesn’t mean it’s a topic that shouldn’t be explored in film or that showing a rape scene somehow glorifies it. It’s up to the each individual viewer to determine if it has merit or not.

Revenge opens with Jen (Matilda Lutz) and her married boyfriend Richard (Kevin Janssens) arriving at a posh home in the middle of the Moroccan desert via helicopter. The pilot slips Richard some peyote before leaving them totally isolated. Richard and Jen are geared up for a weekend of sex and partying. However, they only manage to have one tryst before their party is crashed by Richard’s two friends/hunting buddies Stan (Vincent Colombe) and Dimitri (Guillaume Bouchède). They all drink and party into the night together in a friendly way at first; Dimitri and Stan are very taken with Jen’s flirtatiousness and skimpy outfits. The film offers numerous shots of Jen’s bottom, bikini and snug-fitting “I love L.A” t-shirt—which we learn is because she dreams of moving to Los Angeles. Jen dances with Stan seductively before Richard carries her off to the bedroom.

The next morning, Jen wakes up to find herself alone with Stan and Dimitri after Richard has left to run errands. Stan’s tone toward her has changed dramatically from the night before. He demands to know why she’s not attracted to him and then rapes her as Dimitri knowingly allows it to happen. When Richard returns, Jen insists he take her home, but he has other plans. Jen threatens to tell his wife so Richard responds by hitting her – an act which prompts Jen to take off running barefoot in the desert. The men chase her to a cliff’s edge; Richard tries to calm her down at first, but then turns on her and pushes her off the cliff. Jen’s fall is broken by a tree that punctures through her stomach. The men assume she’s dead and leave, however, Jen miraculously survives.

Jen now faces incredible obstacles on her road to survival as the men begin hunting her. She manages to stab and kill Dimitri after a violent struggle; she takes his gun and Quad and then rides off into the desert. When the Quad runs out of gas—Jen limps to a cave. She manages to start a fire and then finds the peyote that she’d placed in her locket the night before. Jen decides to take the peyote and once she’s high enough, she cauterizes her stomach wound with an empty beer can and the aid of the fire she made. After passing out, she has several hallucinations of the men trying to kill her when she first opens her eyes in the cave. When it appears that she’s woken for real—or maybe not—we discover that an eagle emblem from the beer can she used to cauterize her stomach left a tattoo of itself in place of her wound.

Whether the entire rest of the film from this point on is real or imagined, the eagle tattoo clearly demonstrates a metamorphosis; Jen is now a fearless warrior—infused with the power of peyote. She grabs Dimitri’s gun and sets out to hunt Stan and Richard. She encounters Stan first. They have a bloody battle that leaves Jen victorious. When Stan fails to meet up with Richard in the desert, Richard goes back to the house, calls the helicopter to pick him up and then takes a shower. While under the water, Richard hears a noise; he decides to grab his gun and stalks the house in the nude looking for the origin of the sound. He comes upon Jen—who’s got her gun aimed right at him. He tries to talk to her, but Jen isn’t having it and shoots him. They then engage in a cat and mouse game around the house. It ends in a final act of revenge for Jen when she kills Richard—the man who she trusted enough to bring her to the house to begin with. The movie ends with a shot of Jen alone outside the house – the lone victor. 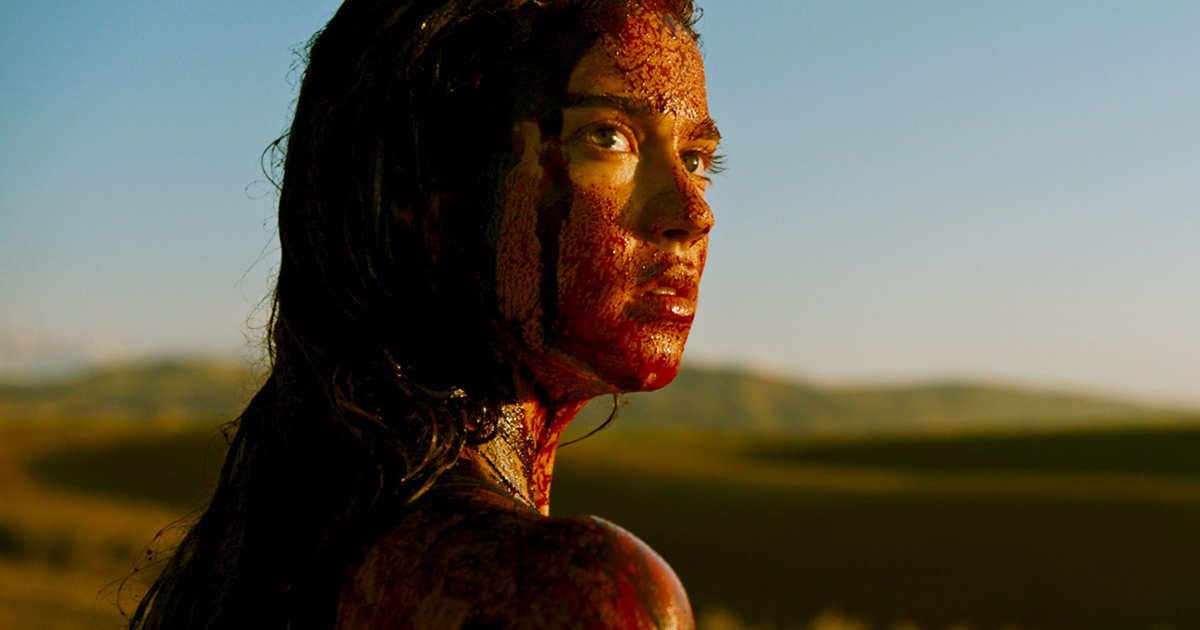 Revenge offers a softer variation of rape-revenge films like I Spit on Your Grave and instead has more of a stylized and trippy way of engaging the viewer. Instead of showing us a brutal rape in vivid detail, the director uses the sound of the television muffling Jen’s screams as Dimitri ignores her cries for help. The French director shows Jen pounding on the window during the attack, but spares the audience the vicious imagery. In the beginning, Jen appeared to be wild and the definition of a typical bubbly blonde girl who dreams of being “noticed” in Los Angeles. It was done in an almost objectifying and clichéd manner—perhaps to demonstrate the parallel to what was likely Jen’s true personality—-which seemed sweet and ultimately proved to be fierce.

At the point in the film where she wakes up to find her stomach healed and the beer can’s eagle emblem in its place I began thinking that everything from that point on was her drug induced peyote fantasy and that none of it was real. Perhaps that is because I’m a David Lynch fan and have been trained to think everything is a dream or perhaps it’s because Jen’s wound bothered me throughout the film. I had trouble accepting that she could survive and walk—let alone fight off three armed men after such an injury, but I think that was the point. You have to suspend reality just a bit to appreciate this movie. I think that’s why I liked it and was pleasantly surprised by it. Yes, it was a female-written and directed horror film in post #Metoo times about female empowerment, but mostly it was just a well done movie. There was plenty of violence, but it was done with visual panache. When I watched it, I wasn’t thinking about politics. I was only thinking about being in Jen’s shoes. I rallied for her to escape, whether it was just in her mind or she was truly free is debatable.

Jen starts out as a Lolita-like character—full of the sex-kitten stereotypes—but the film appeared to use that technique to demonstrate irony as the action/horror genre has historically sexualized women in film. The trope of having a peyote trip in the desert—a heroine/hero getting special “powers” after taking a drug—or revenge-fantasies in general, aren’t exactly new territory. Regardless of how you interpret the film, all that really matters is whether or not you enjoyed the ride.

The buzz that seemed to be in focus about this film, at least from all the reviews I read online, was that it was a female directed movie about the hazards of the male gaze. I find that to be amazing and being that Revenge is Coralie Fargeat’s feature-film debut is very impressive. However, sometimes I think when the media puts the emphasis on stuff like “female-written” or “female empowerment” it almost strikes me as a “she’s pretty good for a girl” attitude, which feels like the opposite of female empowerment. Maybe it’s less bias to keep it simple—no matter the sex of the creator, and simply ask, “is Revenge a good movie?” I vote yes.