This is what Spence (Bill Duke) makes anyone around him say when they allude to slavery, particularly in the context of basketball—that he, as a coach, is “cracking the whip,” for example. It’s a line that thus runs through High Flying Bird and is heard in various scenes, but it also gets to the film’s theme.

To whom does professional basketball belong? Is it the owners—mostly rich white men who happen to possess NBA franchises that they bought or inherited? Or is it the players—most of whom are young black men of exceptional athletic skill? (Everyone in the NBA is very good at basketball, and, of course, not all are black; but most are).

I’d suggest it is the players. It is their game, and without them it would not exist. And this seems to be the thesis of High Flying Bird as well.

Set during an NBA lockout clearly inspired by that of 2011, the film focuses on the travails of Ray Burke (Andre Holland), an agent who represents mostly young players new to the league. Central among these, in terms of the plot, is Erick Scott (Melvin Gregg), whom we meet during a lunch meeting with Ray wherein the latter berates him for accepting a loan with bad terms.

But the fictional story is interspersed with commentary from actual young NBA players—such as Donovan Mitchell and Karl Anthony-Towns—reflecting on their own experiences entering the league and the difficulties involved in acclimating. For example, we get reflections on what it is like to be drafted and feel like you have made it, and how that can be a mistake because it is really only after that the true work begins.

A strike is when labor refuses to work until terms are met. A lockout is when an employer refuses to allow employees to work until terms are met. There is a meaningful difference. Imagine your boss telling you that you can’t work or get your paycheck until you and all of your co-workers take a pay cut, or agree to less sick days, or whatever it is. This is pretty uncommon outside of the world of sports, because it would generally be pretty easy for the workers to garner the support and outrage of the public.

This is less the case when it comes to professional athletes, perhaps because of the large amounts of money they make. During the 2011 lockout, public sentiment (including that of sports analysts and the like) seemed to fall fairly equally between blaming the owners and blaming the players. But this is wildly unfair. Sure, some NBA players make millions and millions of dollars a year—if we’re thinking about the superstars—but others make far less; particularly those who are “role players” and perhaps ride the bench throughout their careers.

Of course, they make good money too—more than I do!—but that isn’t the point. The point is that those salaries stem from the overall profits of the league. The dispute (which has happened before, and will happen again) is about how those profits will be distributed between owners and players (amongst other things). Forget about the sums of money and ask: what do the owners deserve for being rich enough to be owners in the first place? And what do the players deserve for making the thing go? Always side with labor, kids. Always.

And this thesis is to be found in High Flying Bird. 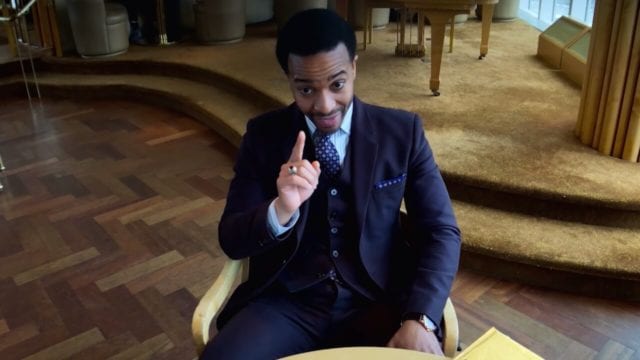 The film itself, however, follows our friend Ray as he manipulates Erick and Jamero Umber (Justin Hurtt-Dunkley) into playing a pick up game against one another, which is then filmed on the phone cameras of young people and becomes viral on social media.

And, the way he does this is truly manipulative: meeting with Mrs. Umber (Jeryl Prescott) to lay some groundwork, sparking a Twitter feud between Jamero and Erick, using his erstwhile assistant Sam (Zazie Beetz) to stir that pot, and so on.

The two young maybe-stars who have signed with the same team (the Knicks I guess?—if you need any further indication that this is a work of fiction) end up going head-to-head in Spence’s gym, but there is no winner. We learn this first from media reports, as the match has caught the attention of the world in the midst of an ongoing NBA lockout, but ultimately learn that Ray called the game when they were tied at 18 rather than letting either get to 21. The point was never for one of them to win.

And as much as he pitches a plan for the players to take the power back through events of this type to Erick—talking about Netflix and so on—it becomes clear that this was never Ray’s real intention. Rather, this was about putting pressure on the NBA owners to meaningfully bring them to that table.

Earlier in the film, David Seton (Kyle MacLachlan) expresses to Myra (Sonja Sohn) after a meeting that the owners he represents had no real interest in negotiating. This was pro forma. She accuses him of negotiating in bad faith, and he says she was, too. And perhaps she was, if we are talking about both sides digging in and not giving any ground. It’s only a compromise if both sides are unhappy, as they say. (But, also, always side with labor, kids).

The resolution seems to be reached as a result of Ray’s tactics. He never met with Netflix about some streaming street basketball series, but apparently put enough fear into the hearts of the rich old white owners that they came around to a compromise. And we all got NBA basketball again.

Of course, this isn’t how the end of the 2011 NBA lockout happened (so far as I know), but that’s not the point that High Flying Bird is making, or the question it is posing. That these events are fictional doesn’t matter; they represent a truth.

Throughout the film, there is the thesis I mentioned earlier: that the league truly belongs to the (black) players, and has been taken from them. See Ray and Spence’s conversations. And Ray seems to truly believe in this idea: that it should be a sport centered on, and prioritizing, the players. He not only gives Erick a copy of Harry Edwards‘ The Revolt of the Black Athlete, but refers to it as “the Bible.”

And, yet, the ultimate resolution is more or less back to business as normal, and Ray’s motivations can certainly be seen in the light of him wanting to resume his job, get paid, and so on. Insofar as he manipulated Erick and Jamero, and never met with Netflix or anything because his real goal was not to create a new system but rather to get the old one going again, is he suspect?

But, then, the players wanted the same thing: to get back to work for the NBA; to get the league going again. And would any of us truly get into something else at this point? Ice Cube may be trying to get a 3-on-3 league going, and we might support that in spirit, but could it ever undermine our desire to know if the Golden State Warriors will win yet again?

It’s one thing to want to change the system; it’s another to work for what’s best within it. And, at the end of the day, that’s the tension I think High Flying Bird drives home.