The following is a guest article from Richard Austin.

Irish TV writer Joe Ahearne was keen to do something vampire-related about for about 11 years before Ultraviolet finally came to our television screens. He toyed around with several ideas and treatments for films, including biblical settings and a Northern Ireland based script before his agent told him he was wasting his time and should come up with something for television instead. Producers were far more interested in projects that could run for a long time than they were in one-offs. So, in 1995 he started to think about ways to bring vampires to the small screen.

Ahearne had won an award for his short film, Latin in a Dark Room at the Edinurgh Festival in 1994, which in turn earned him a job writing for World Productions. It was here that he wrote and directed several episodes of the British TV hit, This Life. When it came to his new idea, he soon realised that he couldn’t have the Vampires as the stars of the show: TV production schedules wouldn’t allow him to do all his filming at night. Instead, he conceived an agency that hunted vampires. After drafting a 90 minute pilot, he took it to World Productions and a series was born. It’s worth noting that this all happened before Buffy the Vampire Slayer came to the small screen. Although it would be a couple of years before Ultraviolet was aired, the concept was greenlit without any of the vampire-hype that has since become the norm on television. Having said that, it’s also fair to say that this all happened a year after Neil Jordan’s version of Anne Rice’s beloved bestseller, Interview with the Vampire, was released, which itself rode in on the coat tails of Bram Stoker’s Dracula two years before. These were two very successful examples of how blood sucking fiends could also become lucrative cash cows.

The show’s six episode run focused on Detective Sergeant Michael Colefield, played by Jack Davenport. He is thrust into the world of vampirism when his best friend disappears during his stag night.  Michael is introduced to a secret paramilitary vampire hunting organisation funded by the government and the Vatican. Among his new colleagues are Idris Elba as Vaughn Rice, a brutal ex-soldier who shoots first and asks questions, well, not very often, and Susannah Harker as brilliant haematologist Angie Marsh. From episode to episode they deal with supposedly unconnected activities of ‘Code Fives’ or ‘leeches’ as the show refers to them. Code five is a reference to the Roman numeral, V. The word vampire is never mentioned once in the entirety of the six episodes.

Despite not using the name, the villains of the show have lots in common with traditional depictions of vampires: superhuman strength, immortality, intolerance of sunlight, inability to check their look in a mirror and of course the tell-tale aversion to garlic and wood-caused heart injuries. Ultraviolet builds on their inability to be detected by recording devices by adding electron microscopes, telephones and voice recorders to the list. The inability to use a telephone is a nice touch as it brings in the creepy use of a voice synthesizer in any phone call. In order to combat the rising tide of leeches, the team employs state of the art weaponry including: allicin (a garlic-derived compound) gas grenades, carbon bullets and camcorder gun sights which let them know who’s human and who’s not. These are functional items and treated as part of the everyday, which makes the whole thing more believable. There isn’t a big fanfare about it; it’s just there and you get on with the story.

In writing Ultraviolet, Ahearne was keen to keep things as serious as possible. He knew that Davenport could pull off the typical deadpan humour of a real murder detective and he wanted this to be the hook for the show’s humour, rather than allowing things to become overly camp. The actors all bought into the concept and that ensured that they played things very real. The key to the show’s success is the way it focusses more on character than it does on action. Ahearne made the scripts rooted in the psychological and that made for an experience that was more serious and deep than it could have been in other hands.

These psychological aspects of the show concentrate largely on the way the characters’ lives are impacted by the work that they do. Michael loses his friend and then has to kill him when he discovers what he has become. He is brought into a secret agency which means that he has to distance himself from all of his former friends and colleagues. This isolation is portrayed very well by Jack Davenport, especially in his interactions with his friend’s fiancée, with whom he is infatuated. His levels of guilt are well constructed but he is never granted absolute nobility; little things are sprinkled into the plot to show his flaws such as the selfish and oblivious way he deals with the feelings of one of his ex-colleagues.

Vaughn Rice, who may be a precursor of Idris Elba’s character in Luther, is a damaged soldier who was forced to kill some of his own men after they were turned. He lives with survivor guilt and the inability to express his feelings for Angie. She in turn has her own massive weight to carry through having to dispatch her own husband, father of her child, when he is ‘born to darkness’ (to use an Anne Rice-ism). This team of damaged people is led by a priest, played by Philip Quast, who is dealing with the news of his own very immediate mortality while being tempted by the other side with promises of everlasting life. So, in terms of conflicts of interest, there are plenty. It’s also worthwhile noting the quality of the supporting cast. Colette Brown does wonderfully well as jilted teacher Kirsty, and has been criminally underused since. Emer Gillespie plays desperation extremely well as a pregnant lawyer in the episode, Sub Judice, and Corin Redgrave makes for a suitably sinister vampire. Stephen Moyer, who plays Michael’s sunlight-averse friend Jack, also went on to play another vampire in True Blood. 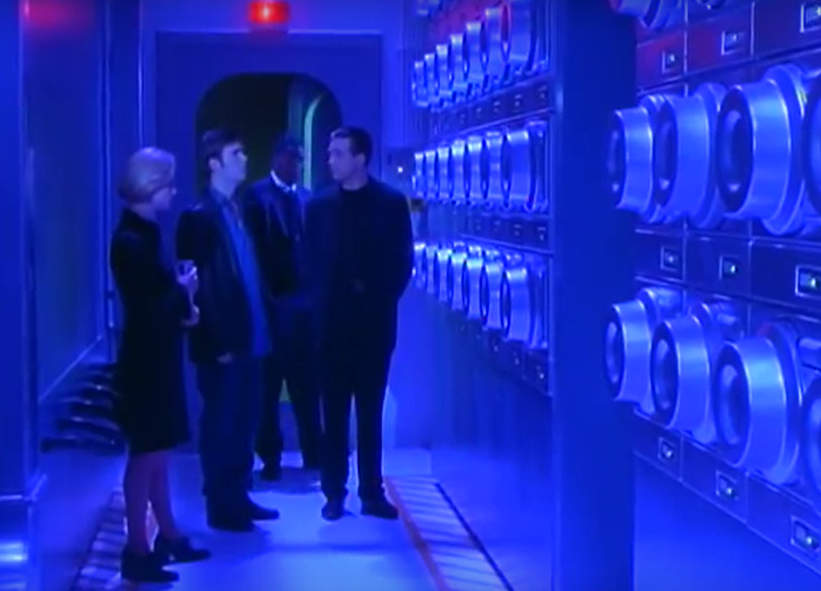 Through the six episodes we see a range of different ideas played out. As I stated earlier, the serious tone of the show is maintained, quite rightly given some of the subject matter that is shown. There is a paedophile ring that attempts to provide the perfect toy in the form of a boy who will live forever and that you can never break. There is the crippling for life of a young woman in a car accident; there is a quite horrific episode exploring abortion, all with the overarching theme of blood diseases being manipulated to wipe out humanity. Ahearne has said that he finds the latter four episodes to be far stronger than the first two, but the gap in quality is not quite as broad in my opinion. The show holds up remarkably well to repeat viewings and has not aged dramatically as some other things from the late 90s have. London makes a great setting for the story and is shot in a real, believable way, not relying on landmarks to sell it.

Although there is a teaser at the end of the first season, Ahearne has stated that there were never any plans in his mind for a second. He came up with the ideas for six episodes and that was as far as he wanted to take it. He was aware of how episodic television could settle into a predictable pattern and wanted to create something that would stand as a completed piece. Several writers came up with ideas for continuations to the show at the time; Ahearne was even very impressed with some of them but World Productions felt that they were too different from his original vision. They felt that Ultraviolet was too particular to Joe Ahearne. Additionally, due to the budget for sc-fi being larger than other genres, it may be that Channel 4 were not that keen to order more episodes.

A few years later, the rights for the show were sold to Fox in America and they made a pilot for their own version of the show. Ahearne had no involvement, stating that he had done everything he wanted to do with the British version. Idris Elba reprised his role as Vaughn and he was joined, among others, by Twin Peaks alumni, Madchen Amick. To this day that pilot has never been aired, but you can find it on YouTube. Producer Howard Gordon has admitted that they “screwed it up” and so it was never picked up by the network. The pilot splices together bits and pieces from two of the British episodes but fails to create the same emotional connection.

British television attempts science fiction and fantasy with far less regularity than our cousins across the Atlantic. When we get it right, it really does shine. This is the case with Ultraviolet. It’s an updated take on vampirism that uses the most pertinent lore and discards the rest. What it does use, it uses brilliantly, for example the hundreds of surveillance pictures that someone has taken being used as proof that they are mad as they are all pictures of empty streets. It’s a neat little package of six episodes that gets right on with storytelling, deliberately plays all its cards in a short space of time, doesn’t hold anything back and does not outstay its welcome. There are full character arcs for all the major players and you really do care about the situations because of the brilliant writing and subtle performances. It remains on my shelf and every once in a while I dust it off and remind myself what a good six hours of entertainment it is. I highly recommend that you do the same.