Welcome to What’s the Buzz, 25YL’s feature where members of our staff provide you with recommendations on a weekly basis. In our internet age, there is so much out there to think about watching, reading, listening to, etc., that it can be hard to separate the wheat from the chaff, filter out the noise, or find those diamonds in the rough. But have no fear! We’re here to help you do that thing I just described with three different metaphors. Each week a rotating cast of writers will offer their recommendations based on things they have discovered. They won’t always be new to the world, but they’ll be new to us, or we hope new to you. This week’s entries come from: Brien Allen, Hannah Searson, Will Johnson, and John Bernardy.

Brien: As a Twin Peaks fan, one of the holes in my background knowledge had always been Sherlock Holmes. I read several of the stories as a kid, long forgotten for the most part, and I have an untouched, leather-bound edition of the complete works looking sharp on a bookshelf around here somewhere, but that was the extent of it. Mark Frost is obviously a fan, and after having read and reviewed The List of Seven, I finally took the plunge and “read” (in audiobook form) the entire collected works. Part of what pushed me over the edge was that I was going with Audible’s exclusive edition, Sherlock Holmes: The Definitive Collection, narrated by none other than Stephen Fry.

Fry is such a joy. He’s so very British, you just couldn’t ask for a better voice. He gives a personal introduction to every novel/collection, detailing—among other things—his own participation as a card-carrying member of the Baker Street Irregulars. And of course he also plays Mycroft Holmes in Guy Ritchie’s Sherlock Holmes: A Game of Shadows, so his street cred here is impeccable. The man has a love and respect for these stories, and it shows in his reading.

I’ll warn you, this is a heavy investment. The audiobook clocks in at just under 63 hours; took me all summer to get through it—on commutes, mowing lawns, and eventually raking leaves. I’m so glad I did though. These stories really do still hold up, over a century later. The audiobook is also regularly priced at nearly $83, so you’re gonna want to get this one with your monthly credit or as your freebie if you’re signing up new.

As a side note, what reminded me and prompted me to write about it this week is that Fry was just recently on Sam Harris’ newly renamed podcast Making Sense, which I also highly recommend (both the podcast and that particular episode).

Hannah: As an unashamed reality TV addict, plowing my way through Netflix’s catalogue of fluffy, meaningless, filled-with-drama shows has been delightful. My favourite of these ventures into such entertainment? Australia’s Instant Hotel.

It’s a reality competition show where teams of two (usually couples, but there’s a mother-daughter duo, siblings, and a few teams of best friends included as well) showcase their “Instant Hotels” (read: AirBnBs) to each other, in the hopes of winning a luxury trip to an Instant Hotel in California. You wouldn’t think that watching teams of bitchy Australians mercilessly drag each other’s choices in bedding would be so entertaining, but it truly is.

Each couple’s Instant Hotel is in a very different location across the country—which allows the more rational, adult-side of my brain to enjoy the great diversity of Australia’s landscape—and each has its own schtick. Some of these are pretty obviously themed, like the couple with the rather fabulous ’50s diner-themed hotel, while others are more subtle. Teams spend the night, and do a tourist activity organised by the hosts in advance. The “hotels” are rated according to their location (including local attractions), the house itself, the comfort of that night’s sleep, and value for money. They are rated by each team, and by a professional interior designer.

At first, the couples act like good sports, they’re friendly and reasonable, and then the magic happens. Almost everyone on this show is a complete monster, which means, in reality TV terms, great fun for us watching at home. They argue and, at times, actively sabotage each other’s Instant Hotels to gain advantage, and that’s without even counting the tactical voting. More than once, the level of competitiveness invoked by the contestants made me forget the actual stakes of the show—the chance to win a rather nice holiday. Hardly life-shattering. Nevertheless, every episode of Instant Hotel is filled with drama, fabulous one-liners, and some rather lovely AirBnBs.

Crass, edited to within an inch of its life, and tacky? Sure. But try and tell me you aren’t entertained.

John: Jay & Myles X-Plain The X-Men is a podcast that’s been digging into the continuity of Marvel Comics’ X-Men franchise going on five years now. They started from the mid-60s, have officially made it through Inferno (supposedly), and are currently covering the early ’90s when I started reading X-Men comics. No reference is too obscure, and few characters are unexplored. Jay and Myles are fantastic hosts, and they have a social-consciousness angle to their style. They cover storylines at a time (rather than one issue per podcast), and you can always tell from the show notes which books are being covered in their two hundred plus episodes. They have an affection for Excalibur, early character Peter Corbeau is a running gag, and I still don’t think they know how they’re going to handle covering Deadpool. However they do it, I’ll be listening with them.

I appreciate the memories the hosts unearth in me, but just as much I appreciate how they try to stay positive through everything. As with anything with a 40-plus year history, there are questionable X-Men moments that don’t age well. The hosts call out those moments responsibly, but the show always comes back to the foundation that they love X-Men. It’s always a positive listening experience of nostalgia, and I’m happy to see it in my feed every Monday morning.

Will: Thanks to literal decades of being in Catholic private school, I’m probably the last person to check out anything religious, so when I heard of a big-budget adaptation of Noah’s Ark, simply titled Noah, my first inclination was to scoff and ignore the whole thing completely. But details kept being released that intrigued me. For one, it was to be directed by the dynamic Darren Aronofsky, whose multiple tales of body horror and self-destruction fascinated me, even if they made me a tad uncomfortable. My eyebrow raised.

At the very least, with Aronofsky at the helm, I knew I’d get a visual feast. His 2006 film The Fountain is a breathtaking work of art, due to the camera work of oft Aronofsky contributor Matthew Libatique, who was also attached to Noah. Then Russell Crowe was cast and seeing how he is one of my top three all-time favorite actors, my second eyebrow raised. Finally, when the trailer was released, I knew that this wasn’t going to be a “religious” film, but a fantasy film, which—surprise surprise—made a lot of people angry. Like, banned-in-multiple-countries angry.

Quick sidebar, for those who don’t know: The traditional story of Noah’s Ark concerns God’s plan to flood the entire Earth so he can start fresh, since humans are ruining everything by being jerks. Two animals of every species board a gigantic ark built by good guy Noah (with his family in tow). With this group of animals and Noah’s small human clan, the Earth will get a nice restart when land is found.

For the truly devout, I could see why Noah would make them angry. Noah has a lot on its agenda and it approaches all of it without a lot of subtly. For one, it treats the story of Noah’s Ark, and of creation itself, as mythology, not “religion.” By not watering it down like many adaptations do of specific Biblical works, Aronofsky shows why God, referenced specifically in the film as The Creator, would want to cleanse the world by flooding it completely and saving no one but the animals—because men are evil and violent as hell! And Noah does not shy away from depicting the violence, amongst other debaucheries.

And that is if The Creator even exists. Aronofsky often posits that perhaps there is no Creator or, if there is, he is indifferent or, even worse for true believers, cruel. As man rapes the planet of its resources and consumes animals because, as Noah (Crowe) says at one point, “they think it makes them strong”, the more respectful of the human race cry for a sign and hear nothing in return. Except, well, death.

God-caused apocalypse or not, the world of Noah is on the verge of collapse anyway. In one of Noah’s truly excellent moves, it legitimately makes the viewer question whether we are seeing antediluvian times, or a post-apocalyptic future. The world of men has become heavily industrialized, so much so, that the planet has virtually been tapped of all its resources. The world visually looks more akin to Mad Max than, say, a stylized fantasy film. This twist in our perception is another moral allegory on top of the above mentioned, not-so-subtle messages of environmentalism and vegetarianism.

The final nail in the coffin for acceptance by any religious community is a surprising twist I did not see coming. I won’t spoil it for you as I am recommending everyone give this film a watch but, needless to say, if you were expecting a film with heroes or, at the very least, a film showing the positivity of faith, you probably got the wrong film! Noah is, at times, almost anti-faith based and, amongst the many other “-isms it projects,” shows the dangers of religious extremism.

I was floored by this film. Like many people, I thought this might be a righteous faith-based film trying to teach atheist heathens like myself the true meaning of the Lord. Instead, I got a morally ambiguous fable concerning the destruction man brings on himself, especially when clouded in naked and unwavering belief in something that might not actually exist.

Enjoy this watered down (pun intended) trailer. Also, did I forget to mention there are rock monsters in this movie too?

Want to hear more from the 25YL staff? You can find a number of us on Twin Peaks: Unwrapped this month, as we celebrate our Twin Peaks roots all February long!

And let us know what you recommend! You never know, we might check it out and write something! 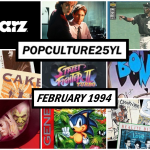