We’ve known for some time that Shudder was far from through with Joe Bob Briggs after last year’s success. Today, the service confirmed the long talked about weekly series The Last Drive-In With Joe Bob Briggs. In case you were unavoidably detained and generally out of it for 2018, Briggs came back to present 24 hours of the weird and wonderful cult titles horror fans love. To no one’s surprise, that transitioned into two holiday themed marathons that tested the senses. Now, we’re here with all the details about the next chapter in drive-in mayhem.

The show premieres Friday, March 29th at 9:00 p.m ET/ 6:00 p.m. PT. Fighting off cenobites or wrestling with a masked serial killer that night? Don’t worry, Shudder will be adding the series to its on-demand collection later. Unlike the previous marathons, it’s not an all-nighter. So why not go for another round of 24 hour endurance? “We’ve had The Last Drive-In 24-hour marathon, The Last Drive-In Thanksgiving marathon, and The
Last Drive-In Christmas marathon, but the Shudder audience kept asking for some kind of programming that didn’t require sleep deprivation and controlled substances,” Briggs said. Instead, viewers get to experience two handpicked titles from the man himself. Expect everything you loved about the previous marathons with some surprising choices thrown in that will keep you on your toes. “The double features we chose for the weekly series range over five decades and include everything from classics to obscurities to foreign cult offerings, with a handful of guests who have agreed to play around with us in our Texas trailer park. I don’t want to say we got carried away with the possibilities here, but we kind of got carried away with the possibilities here.”

The same team who brought the marathons to the screen will also be there to back up Joe Bob along the way. Producers Matt Manjourides and Justin Martell as well as director Austin Jennings are along for the ride. Of course, Darcy the Mail Girl will be there to deliver all of your most biting critiques.

Watch the series’ first trailer below and keep up with 25YL for our Last Drive-In coverage! 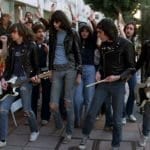