Much like Who Framed Roger Rabbit before it, What Happened To Monday is not a question (hence the lack of the proper punctuation at the end) but more a statement of intent: this is what happened to Monday, so sit back and enjoy. Or, more likely, squirm.

Seemingly lost in the myriad Netflix Original titles as you scroll through the menus looking for entertainment, What Happened To Monday is just as likely to be considered a Buried Treasure as more high-profile, heavier advertised original fare from the streaming behemoth has made bigger waves. Even if these other films made particularly negative waves, *cough cough* Bright, it still made waves nonetheless.

Which is a shame because Monday is a fantastic, cult-in-the-making genre film that combines high concept science-fiction, subtle(ish) allegory, and intense drama, featuring current Netflix gun-for-hire Noomi Rapace (this is one of three Netflix Originals she has starred in at this point) playing not one or two roles, but seven. And don’t get me started on when one of the seven she is playing is pretending to play another one of the seven she is playing! It’s acting upon acting within acting—and it makes Monday a terrific if little-seen, success.

Monday takes place in the not-too-distant future where overpopulation has destroyed the environment and caused food shortages. A One Child Only policy, enacted by the Child Allocation Bureau in Europe, has literally torn families apart in the name of conservation. Any “siblings”, as they are referred to almost derogatorily, are sent to an Allocation center where they are frozen for a much better future.

A man named Terrance Settman (Willem Dafoe) decides to protect his septuplet grandchildren (played by newcomer Clara Read) from the authorities by raising them in secret and allowing one child each to enter the real world on their assigned day, which also happens to be their names: Monday goes out on Mondays, Tuesday on Tuesdays, etc. As the children’s mother died in childbirth, Terrance is the only protection the girls have. 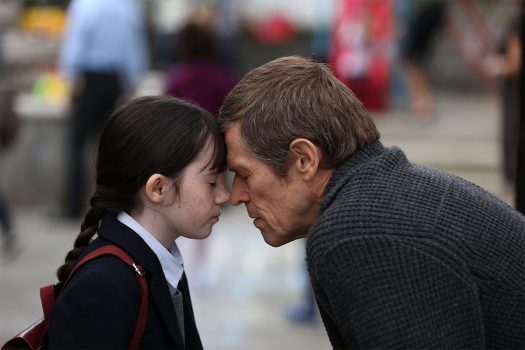 Over time, after daily meetings and success at school, the girls, in their thirties at the time of the film’s start (now played by Noomi Rapace), have risen in the financial world as a woman named Karen Settman, and live a life of luxury, if not loneliness. Their secret is still hidden in a world growing more and more hostile and Terrance is no longer there to guide them. They still go out only on their days of the week, which gives the girls an increasingly more complicated life, having to know who Karen is dating, screwing, flirting with, making enemies of, and avoiding at work to keep one consistent Karen story moving forward without detection.

One day, Monday, the “perfect” leader of the group, goes missing sometime after work. Led by the confident and kind Sunday, the six remaining sisters, including the nervous-wreck redhead (and drug user) Tuesday, the athletic/fighter Wednesday, the rebellious and apathetic Thursday, the brainiac, computer wiz Friday and the party girl, platinum blond sexpot Saturday, must figure out what happened to Monday, at risk of their freedom and lives.

Directed by Dead Snow and Hansel & Gretel: Witch Hunter’s Tommy Wirkola, with a script by relative newcomers Max Botkin and Kerry Williamson, Monday does a standard expository-opening thirty minutes, establishing the world and introducing you to the characters. As a result, and due to non-flashy production design and a standard electronic-lite score, the film begins with some expected tropes and genre leanings.

What sets Monday apart, however, is the remainder of the film, when Wirkola decides to take the expectations and comforts of those first thirty minutes and throws them out the window in extreme ways.

This turning point is during a flashback, when a young Thursday leaves the house without permission outside of her assigned day, and suffers an accident that severs one of her fingers. Since the girls must all be the same in every way, including any scars or injuries, to keep the illusion up, Terrance is forced to cut the same finger off the other six girls. Shot with emphasis on the large butcher knife and the frightened faces of everyone involved, the scene is immensely uncomfortable and begins the process of unraveling any comfort-food level of genre you were resigned to. 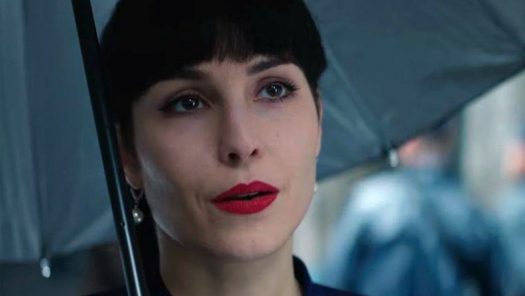 Without spoiling anything further, Monday becomes an unexpected action and chase film with shocking levels of violence and gore not to mention two or three plot twists that less safe genre fare would avoid. As the finger-cutting scene predicted, the world isn’t always a place where just the bad guys are punished. Sometimes the good must suffer as well.

Though brief supporting roles are held by heavyweights like Willem Dafoe and Glenn Close (who plays a One Child Only supporting political figure who perhaps intentionally looks like Hillary Clinton), the film rests on the skills of Noomi Rapace as all seven siblings (it should be noted, the title of the film at one point was, simply, Seven Sisters).

As fans of Rapace know, she often excels at tasking, physical roles. And Monday has Rapace go through some pretty harrowing situations that rival her memorable forced C-section in Prometheus. Any google image search will show versions of the sisters with broken noses, copious amounts of blood, screaming, running in the rain, jumping from tall buildings, and having parts of their body subject to … modification.

Besides the physical attributes of the performance though, Rapace’s subtle choices with all seven sisters, who only get so much screentime each, is masterful. This goes beyond assigning each sister a “type”, though, as I described the plot above, it is easy to define them as such. Each character is distinct and known for something, but Rapace brings out a lot more in each.

For instance, Wednesday is shown to be the athletic one who likes boxing. You assume she’ll be the go-to person for any action scene but she has her limitations, doubts, and fears. A lesser actress would simply keep Wednesday as the tough one without layers, giving out more punches than actual dialogue.

Also, Rapace’s take on each character allows the story to shift around who is really in charge of the narrative. At separate moments, Sunday, Tuesday, Thursday, and Saturday all show the capacity to lead and at times you think each will be the hero. Only, as I said above, the film doesn’t allow for such plot convenient trappings. 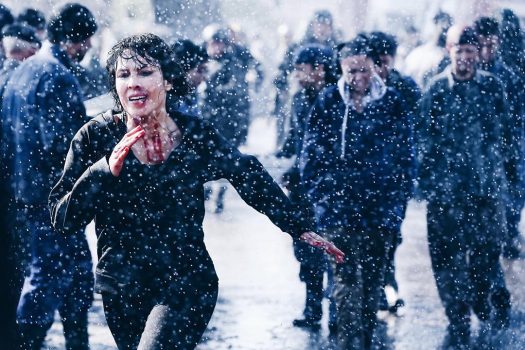 While Close is predictably good (is it even fair to call a Glenn Close performance “fine”?), Willem Dafoe provides an emotional turn as the sister’s grandfather. Seemingly building off his fatherly and touching performance in The Florida Project, Dafoe is soothing to watch, and his pain and concern is also ours. It is yet another fantastic, and likely unappreciated, Dafoe role.

Supported by superior acting and a well-written script, What Happened to Monday makes up for the somewhat been-there, done-that physical environment (the film was shot in Romania and does what it can with the aged buildings, but not much else) and the slow first thirty minutes. It may have passed you by once in the endless scrolling screen of content, but don’t let it happen again. You’ve got a diamond in the rough waiting to be watched on any day of the week.