After Mr. World’s attack on the old gods, the aged deities decide it’s time to go their separate ways in American Gods Episode 2, “This Beguiling Man.” Mr. Wednesday and Mr. Nancy hit the road together, and the Jinn and Salim go forth looking for Odin’s spear. Laura Moon and Mad Sweeney steal a car in pursuit of the abducted Shadow. Laura’s good to go until the road (literally) runs out and she begins to lose faith, even though earlier she has made it extremely clear that she’s atheist and her life (or in this case, death) is her own. Luckily, Sweeney still has a bit of magic up his sleeve, even if their luck is tested throughout the trip with flat tires and harsh words.

The new gods continue to rally, with Mr. World hoping to slay Bilquis once and for all. Technical Boy continues to chase down Media, who refuses to show her new face, and Technical Boy mocks her for clinging to old pop culture forms.

The bulk of the episode, however, focuses on Mr. Town’s interrogation and torture of Shadow Moon. Traveling via train, Town has Shadow hooked up to some sort of digital torture device, asking him for information on Wednesday. Shadow refuses to budge, and thus we are treated to a flashback of Shadow’s life when he first came to America. Tall and bookish, Shadow learns to fight because it’s the only way to live in a country that hates him. His mother is the quiet voice of reason until she loses her life to cancer. 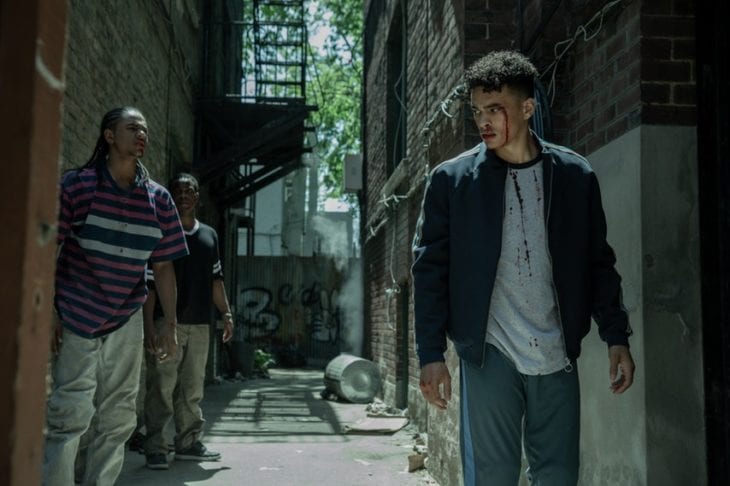 In a scene where young Shadow waits for his mother, he meets a man (only seen off camera) who teaches Shadow his signature coin trick. The voice sounds awfully like Wednesday’s. For new viewers, this might feel confusing. For those who’ve read the book, it’s along the lines of Wednesday’s estimation of fortunes from last week: “opaque on arrival, inevitable in retrospect.” As a fan of the book, it feels like it’s edging toward giving too much away too quickly.

The episode ends with Sweeney and Laura teleporting (thanks to Sweeney utilizing the Horde) to the train and busting up Mr. Town’s men. Wednesday leaves his car on the tracks to derail the same train, explaining to his car that its sacrifice will be worth it. Laura makes it to Shadow, explaining that she had to save him, and the train bursts into flames, having impacted Wednesday’s car.

In this episode we’re totally off book, but every player has their little piece of the action. I’m beginning to enjoy the unlikely pairing of Laura and Mad Sweeney. Both act as good foils for the other. Mr. Nancy and Mr. Wednesday aren’t given much to work with this episode, but their casting is so perfect, I can’t take my eyes off them whenever they are on screen.

Getting in Shadow’s head and seeing who he used to be prior to his life with Laura was a nice divergence, although it comes much later on in the book. The flashbacks also felt like a nice return to the “Somewhere in America” sequences that peppered the first season with political commentary. And in a way, they work in a similar fashion, showing Shadow change from a bookish young man to the standoffish and don’t-mess-with-me sort of guy that made Wednesday choose him to be his bodyguard.

As far as the new gods go, I’m interested to see the New Media in the flesh soon, but was glad they held off a bit longer this episode and gave Technical Boy more time to shine before he shuts it all down. We’re definitely in undiscovered country here, and I’m eager to see how it plays out.