“Only the best people fight against all obstacles in pursuit of happiness.” – Juliet Hulme, “Heavenly Creatures”

“No good opera plot can be sensible, for people do not sing when they are feeling sensible.” – W. H. Auden

Long before Peter Jackson was known for transforming New Zealand into Tolkien’s Middle Earth, he revisited the fantastic inner workings behind one of the country’s most chilling crimes: the Parker-Hulme murder case. In June 1954, Pauline Parker and her best friend, Juliet Hulme, brutally murdered Pauline’s mother, Honora, in Victoria Park, Christchurch. Pulling from historical texts and Pauline’s diaries, Jackson crafted Heavenly Creatures. Rather than focusing on the aftermath and trial of the two teenage girls, Jackson takes a deep dive into the fantasy world the two created and eventually lead to them conspiring to carry out matricide.

The first time I watched Heavenly Creatures, I wasn’t much older than the girls were. Like every other teenaged girl at the time, I’d seen Titanic half a dozen times and was burning up my parents Blockbuster card to delve into Kate Winslet’s already impressive back catalog of films. I remember feeling transfixed from beginning to end, my stomach twisted in a knot when the screen finally faded to black.

When I sat down to rewatch it recently, all those feelings came rushing back, remembering those sort of frenetic close friendships that are made quickly over the smallest things, the secrets or stories that are only yours. But unlike Pauline and Juliet, those friendships naturally sputtered or faded over time, a byproduct of angst and hormones and fumbling towards some sort of adulthood. Teenagers are messy and touchy and terrible and absolutely nothing is set in stone, and I believe that’s what makes Heavenly Creatures so tragic. As a teen, I leaned into the girls’ perspective of losing one another. As an adult, it’s much more than simple tragedy—it’s opera on a grand scale. 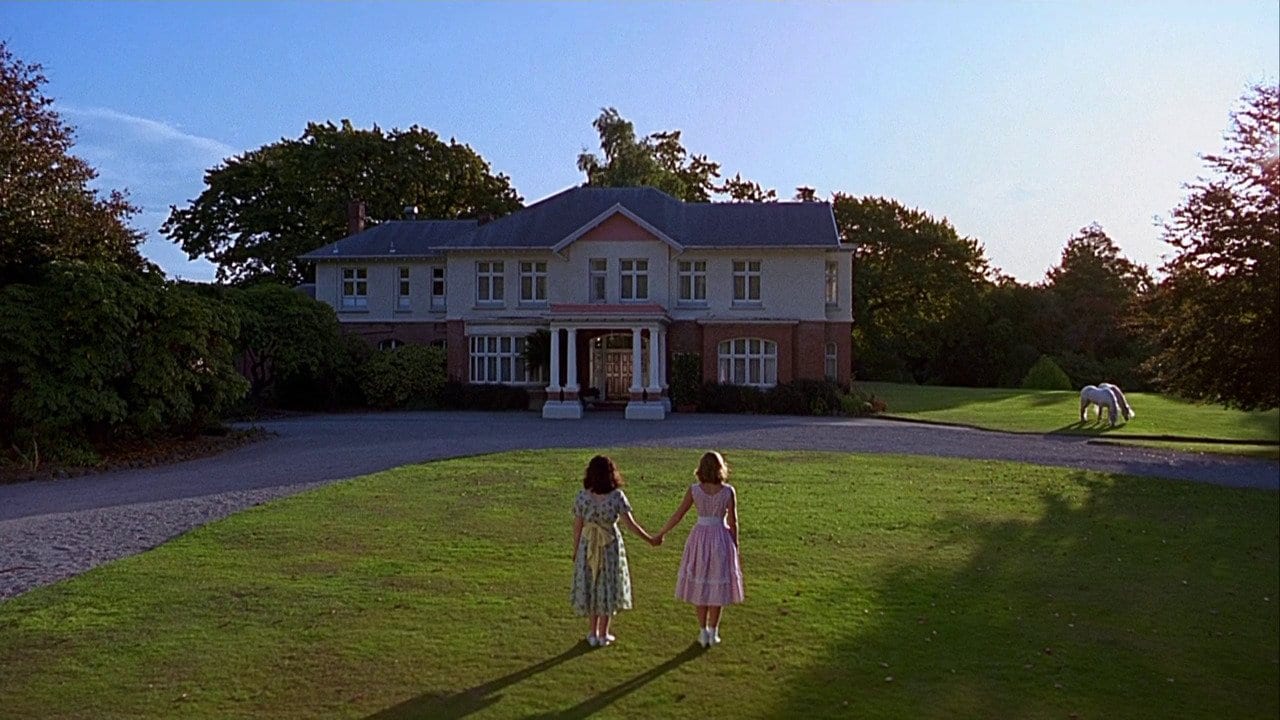 Pauline’s diary doubles as a libretto of sorts, documenting their relationship from the beginning till the day of the murder. Both outcasts initially become instant friends due to their history of chronic illnesses, which Juliet rephrases as a strength rather than a weakness:

“Only the best people have bad chests and bone diseases, it’s so frightfully romantic!”

Later on, the diary is filled with stories of the girl’s “Fourth World” where movie stars and singers double as saints on a makeshift brick altar in Juliet’s backyard at Ilam. This imagined world becomes reality to the girls after Juliet’s breakdown over her parents nonchalantly revealing they’ll be popping off to England for a while, leaving her on her own. The world deepens when Juliet is diagnosed with tuberculosis and sent off to hospital to convalesce, and the girls write letters to each other as characters in their novel.

Between the illnesses and fear of being alone, it’s no wonder both girls bonded so quickly and preferred to escape through writing, art, or discussing film and music. The moods of the girls are buoyed by the sharp and sometimes ironic soundtrack. After hearing Juliet loves Mario Lanza, Pauline runs out to buy a record and swoons over “Be My Love” in her cramped living room. As things progress, the girls skip school and strip down to their underthings in a forest, yelling out bits of “The Donkey Serenade” before falling down into ivy and kissing:

“There’s a light in her eye

Though she may try to hide it, she cannot deny

There’s a light in her eye…

Whether or not the girls were lesbians is widely debated across literature and denied by those who knew the girls, including Juliet herself, now known as the writer Anne Perry. Jackson smartly leaves both red herrings and clues, allowing audiences to decide for themselves, but most importantly, showcasing that the girls and their relationship didn’t neatly fit in one particular category. Rightly so, since adolescence is a time of major changes and mood swings. Even the doctor that Pauline is taken to mentions that she could “grow out of it” at some point.

The girls continue to grow closer and the mood begins to dramatically shift from the light airy, giddy fairytale feeling to destruction and despair. When Pauline’s mother tries to keep the girls apart, Pauline runs to her room to play selections from the opera Tosca (which is amazingly noted in her actual diary) and she considers suicide. The two girls scheme and steal to get money to go to Hollywood. Pauline drops out of school, and Juliet deals with the double blow of her parents divorcing and her father deciding to return to England, although Juliet will be dropped off in South Africa with an aunt.

The only return to the happy refrain of the first part of the movie is seen when Pauline is allowed to stay with Juliet two weeks before her departure. When Pauline arrives, Juliet descends the staircase is a gold evening gown, sweeps Pauline up into her arms and Mario Lanza serenades their journey to the Fourth World with “The Loveliest Night of the Year” :

“When you are in love

It’s the loveliest night of the year

And you almost can touch them from here

Any time you are holding me near

When you are in love

It’s the loveliest night of the year”

Sadly, it won’t last for long as the two have decided they will murder Pauline’s mother, who refuses to let her get a passport to travel with Juliet. While we see Pauline’s reactions to her mother, we also clearly see her mother’s worry and compassion. She doesn’t want Pauline to be unhappy, but she doesn’t understand her.

Every opera needs a twist of fate, that moment of epiphany. This moment builds slowly, through a game of Chinese whispers where people are talking around each other instead of dealing with things straight on. Thanks in part to albeit well-meaning parents, trying to keep the girls apart (Pauline’s parents) or coddling them with lightly dressed lies about being able to stay together (Juliet’s parents), the miscommunication is layered over the girls’ already complex style of communicating – slipping in an out of character nicknames—leading to the confusion and claustrophobic feelings that their precious world and friendship would be wrecked forever if they’re to be parted again. If they had been allowed to step back and breathe and think objectively, things might have gone another way.

Jackson smartly merges the real world with their imaginary ones so we begin to see how things blurred the girls perspective is. For example, the girls envision ridding themselves of the lodger Pauline slept with by distracting him with a pink jeweled ring in their clay world of Borovnia. After his untimely demise, the pink stone from the ring rolls into the real world. It stays on Juliet’s bedside table until they plan to use it in their real-world murder. The day they plan the murder, unicorns roam on the front lawn of Ilam. By dusk, their altar is dismantled and their records tossed into a bonfire. (One of those bricks will soon become the murder weapon, wrapped in one of Pauline’s stockings.)

When Pauline returns home, she imagines Juliet, red-lipped and weeping, singing “Sono Andati” from her balcony in honor of their great love and plan. In La Boheme, Mimi is consumptive and close to death, which doubly mirrors Juliet’s own health struggles and Pauline’s state of mind. The translated lyrics also sum up the girl’s complex relationship:

“Are they gone? I was pretending to sleep

So I could be alone with you

Or just one, but it’s as big as the sea

As deep and infinite as the sea

You are my love and my whole life”

Jackson intercuts this song with a black and white dream sequence of the girls running across a boat deck to Juliet’s parents. This sequence is introduced in the opening frames of the film and we’ll see it once again at the end.

For all the whirlwind and fantastic flurry of emotions we are treated to as a viewer, the day of the murder is quiet and slow, with a clock ticking away the minutes until “The Humming Chorus” kicks in and accompanies us into the descent into the depths of Victoria Park. In Madame Butterfly, the piece plays while Butterfly awaits the return of her love, only for her vision of happiness to be shattered by him returning with a wife. The song fades out as soon as Juliet drops the pink stone into the mud to distract Pauline’s mother.

Then the brick hits, again and again, and the scene switches between the murder and the black and white dream sequence of the ship they’re both longing to sail away on, only now, Juliet is the only one aboard and Pauline is left in the crowd. Originally, Jackson ended it with Pauline’s scream in complete blackness, but the uncut version (formerly known to collectors as the workprint version) shatters the dream completely, showing Pauline crying out, her face covered in blood.

The end title cards concisely sum up what came next: the girls were found guilty of murder, they served five years in prison before being released to go their separate ways, with the condition of their release being they never see one another ever again. As the credits roll, Mario Lanza wails out “You’ll Never Walk Alone,” ironic and biting to the last moments of the film, and counterpart to the main credits opening to the strains of the church hymn “Just a Closer Walk with Thee.” Originally featured in the musical “Carousel” it marks the moment the heroine realizes she never told her husband she loved him and will have to make her way forward without him:

“Walk on through the wind

Walk on through the rain

Though your dreams be tossed and blown

Walk on, walk on

With hope in your heart

Heavenly Creatures stands alone among true-crime films, measured and multilayered, and even magical at moments, thanks in parts to the burning passion of then-unknown Kate Winslet and criminally overlooked Melanie Lynskey. Their performances as Juliet and Pauline are both relatable and frustrating and Jackson fully realizes the world the girls longed to dwell in and the lengths they’d tragically go to, only to be separated forever by a terrible mistake.