In the classic psychological thriller film Silence of the Lambs, FBI trainee Clarice Starling works (along with Hannibal Lecter) to build a profile of serial killer Buffalo Bill, who skins his female victims. Sterling is able to piece together assumptions about the killer: it’s a white male, in his 30s or 40s, not a drifter, he’s excited by the killings, and will kill again.

In many films and TV shows today, we see the FBI using behavioral clues to help catch a killer. We wouldn’t even think twice about it. But where did this baseline knowledge come from?

This question is at the heart of Netflix’s fantastic original drama Mindhunter, which debuted in 2017. Based on the nonfiction 1995 book Mindhunter: Inside the FBI’s Elite Serial Crime Unit, by retired FBI agent John E. Douglas and his coauthor Mark Olshaker, Mindhunter gives us a look into the early days of the FBI’s Behavioral Science Unit.

Set in 1977, Mindhunter follows Agents Holden Ford (Jonathan Groff) and Bill Tench (Holt McCallany), as well as psychologist Wendy Carr (Anna Torv), as they work to try to understand who criminals are and figure out why they do what they do. 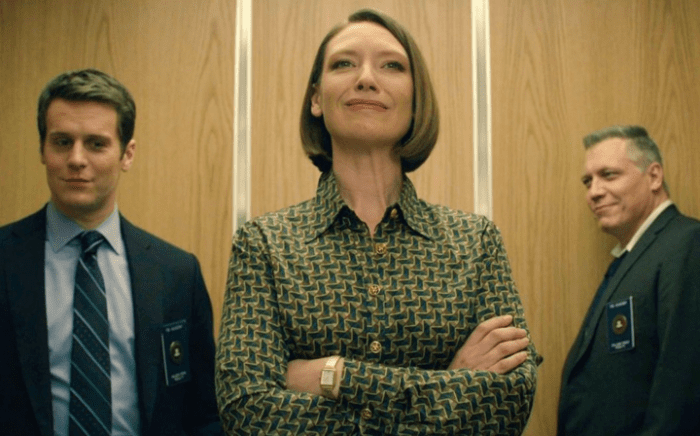 Early on in Mindhunter Season 1, Holden, a young and determined go-getter FBI agent teaching hostage negotiation tactics at Quantico, has a discussion with a fellow professor about people who kill for almost no apparent reason. “Crime has changed,” the professor says. “Where do we go when motive becomes elusive?”

At this time in the late 1970s, many law officials thought violent killers committed their crimes simply because they were “crazy,” Holden learns while traveling the country advising local law enforcement with his new partner, Tench. Holden begins to wonder if there’s more to it than that. What if they could start building a pattern with violent offenders, which could help them prevent future crimes?

From this line of thinking, Holden gets an idea: He decides to visit killers in prison and interview them to find out what makes them tick.

All of these men were real-life murderers, and the interviews with them present some incredibly intense moments. Through the interviews, Holden, Tench, and Wendy are able to draw commonalities (most of the killers experienced abusive or absent parents) and differences (Kemper is the type of person who confesses to everything he’s done after being arrested, and Brudos denies everything, including proven details about his murders). They also are shown coining the term “serial killer,” a scene that seemed a little too on the nose, but also hammered home to me how the idea of understanding (or trying to understand) serial killers hasn’t been around for all that long.

The major thread throughout Mindhunter Season 1 is Holden’s fascinating relationship with Kemper. Masterfully played by Cameron Britton, Kemper is an imposing figure, towering over Holden and Tench. (The real Edmund Kemper is 6′ 9″.) He’s soft spoken, but insightful. Kemper’s eagerness to “help” Holden learn more about him at times almost makes him likeable. But then he says something about how he put his mom’s vocal chords in the garbage disposal because he could never shut her up, and you’re reminded that this man is a monster.

Holden interviews Kemper multiple times, and the two definitely form a strange relationship. At one point Holden questions this relationship, but Tench assures him: “He thinks you’re his friend. Which makes you a great FBI agent.”

The relationship comes to a head in the Season 1 finale, when Holden receives a message from a California medical facility. Kemper had attempted suicide and listed Holden as his emergency contact.

Against conventional wisdom, Holden flies out to California to visit Kemper. “You came!” Kemper exclaims from his hospital bed, which looks like a kid’s bed due to Kemper’s giant frame.

When Holden explains his team has labeled Kemper as an “organized killer,” he retorts with a chilling “You think you can boil me down to a single adjective?” Every time I watch this scene it makes my palms sweat, and it seems to have a similar effect on Holden. As Kemper jumps out of his hospital bed, points out that he could kill him in that moment as the guard has walked away, and gives Holden a big hug, Holden runs out of the room. He collapses on the floor, hyperventilating and having a panic attack. Meanwhile, Led Zeppelin’s “In the Light” cuts in at the perfect time, putting an exclamation point on this brilliant scene.

Is It Worth It?

Putting Holden’s decision to visit Kemper in the hospital (which obviously was a questionable choice at best) aside, the characters within the Behavioral Science Unit often openly wonder whether the work they’re doing is worth it. Are they doing the right thing? Is it possible that the interview subjects are simply feeding them a plate of bullshit?

I’m glad that the characters question the work they’re doing. The FBI higher-ups are dubious of its value, perhaps best exemplified by the BSU being banished to the basement, X-Files style. It would be easy to frame this show as an “Us versus Them” battle against the establishment. It does that to a certain extent, but having Holden, Tench, and Wendy question themselves makes Mindhunter more interesting. And really, there isn’t a clear answer on how their work will pay off.

During Holden and Tench’s training visits throughout the country, local law enforcement approaches them for help with a number of “case of the week” scenarios. These act almost as a measuring stick for the psychological work the unit is performing. They have mixed results.

In one case, Holden gets a confession out of a tree service worker who murdered a high school majorette. He says that his interviews with Kemper helped him solve the case. In another, Holden and Tench are approached about a school principal who tickles the feet of his students. Without any evidence of anything more than the feet tickling, Holden believes that the principal was at risk of other deviant behavior in the future.

“Did we do the right thing? Is this a federal issue?” they wonder after warning the principal to stop the tickling. While I agree with Holden that the principal’s behavior was extremely odd and inappropriate, I’m not sure this was the proper situation to be testing the information gained from the murderer interviews. These kinds of questions are what make Mindhunter so great.

Psychology, in general, fascinates me. I always want to know why people do the things they do. Because of this, I’m obviously a big fan of the subject matter of Mindhunter and find myself rooting for the characters in the BSU; that the work they’re doing is indeed worth it. But, I think it’s important to remember that psychological profiling of serial killers probably can’t provide all of the answers. It’s not a silver bullet. It’s a tool in the tool belt. Sometimes the motive for a murder can’t be explained—for example when the real-world FBI couldn’t find a specific motive for the 2017 mass shooting at a country music festival in Las Vegas. Sometimes, maybe we are just up against crazy after all, with no way to prevent terrible things from happening.

While the main thrust of Mindhunter Season 1 is the Behavior Science Unit’s search for why serial killers commit their crimes, the FBI agents are also looking for answers in their own lives.

Holden is trying to figure out who he is through his somewhat rocky relationship with his girlfriend, Debbie. And even though he can read criminals to tell when they’re hiding something, he struggles to realize that Debbie may not be the best fit for him. He doesn’t realize she wants to break up with him until she finally pulls the plug, even though she had been showing signs of being unsatisfied for a long time.

Bill Tench, whose biggest objective in life at first seems to be to spend as much time on the golf course as possible, is actually living through some devastating issues at home. After he and his wife were unable to conceive a child, they decided to adopt. However, their son Brian will barely speak and doesn’t acknowledge Bill. This storyline was given a very small share of Mindhunter Season 1, but I found it heartbreaking. Especially when Bill and his wife Nancy discover that Brian has found graphic photos from a murder crime scene. After initially yelling at each other, all Bill and Nancy can do is break down and embrace in a very touching moment.

Wendy also is learning more about herself, having to hide the fact that she’s a lesbian and dealing with feeling inadequate in her career. Her character definitely has some room for interesting growth, and I look forward to seeing where it goes from here in the next season.

These details may seem like background, but I found them really valuable. Without this material being strong, Mindhunter wouldn’t be the show that it is.

Sprinkled throughout Mindhunter Season 1 are short scenes with a mustachioed man in Kansas, who is up to no good. I kept half-expecting him to be revealed as one of Philip’s alter-egos from The Americans.

While never officially identified, the man is likely the Kansas serial killer Dennis Rader, who worked as an ADT Security Services installer and killed 10 people. I have to imagine Season 2 of Mindhunter will return and pay more attention to this storyline. But will Holden and Tench be pursuing him? Or will he already be in jail by the time the FBI becomes involved? Will their paths cross at all?

I’m also interested to see what kinds of consequences Holden will be facing. At the end of Season 1, he was on very thin ice at the FBI. He asked new recruit Greg to omit some of the transcript from one of Holden’s interviews in which he used some eyebrow-raising methods of interrogation. I’m assuming he’ll continue his work with the team, but maybe in a more limited role. This could possibly allow Tench to take more of a lead role. But after his final confrontation with Kemper, will Holden be more hesitant to put himself out in front of these killers?

I’m hoping we see more of the “case of the week” mysteries as well. It’s really amazing to think about all of the different levels within Mindhunter, from the psychology interviews, to the case of the week, to the personal lives of the FBI agents, to the mysterious scenes in Kansas. I can’t decide what I like best.

Shortly after the first season aired, Netflix picked up Mindhunter for a second season. But we still don’t have a release date for Season 2. It’ll be sometime in 2019, but exactly when is anyone’s guess. Here’s hoping we don’t have to wait much longer.