Last week’s episode “The Red Angel” ended with Captain Leland of Section 31 apparently attacked and injected with something by Control—31’s central computer core infected with an advanced future artificial intelligence—and Commander Michael Burnham discovering that the Red Angel is, in fact, her mother, whom she has believed dead for the past 20 years. Star Trek: Discovery is rocketing toward the end of its second season and we’re seeing some of the story threads from this season weaving together.

“Perpetual Infinity” is Sonequa Martin-Green’s episode. Okay, they pretty much all are, since she’s the star of the show and all, but this one is even more so and in a rather intimate way. Burnham is reunited with the mother who she thought was killed in a Klingon attack when she was a girl. Martin-Green gives an amazing performance as a woman, an officer, whose whole life and self-understanding has just completely unraveled and who has had her whole personal landscape reshaped.

Season 2 has largely been about transformations. We’ve seen Saru evolve from a timid, fearful member of a subjugated race to a confident, powerful, self-assured, and occasionally intimidating character. Doctor Culber was murdered in the first season, re-created in the mycelial network, and essentially brought back to life this season, unsure of who he is, what he feels, or if he’s even the same person he was before. We’ve seen Tilly step out from the shadow of her mother’s discouragements and put-downs and into the command training program, wrestling with her own doubts and self-worth as she does.

And now we see Burnham face the reevaluation of her entire self-image. She grew into adulthood with the guilt that her parents’ deaths were her fault, not ever knowing that the Klingon attack in which they were killed (or so she thought) was in response to a project they were working on for Section 31—the Red Angel. How will she deal with the realization that her lifetime of guilt was never founded? In the end, it’s Spock who provides her comfort, rescuing her from the maelstrom of her emotions and anchoring her with logic.

The Red Angel, we learn, is basically a personal time vessel. Young Michael’s mother hid her away when the Klingons attacked, suited up, and intended to jump back in time one hour to rescue her family before the Klingons arrive. However, the suit takes her 950 years into the future, and she’s been stuck there ever since. She makes jumps into the past, but she’s temporally anchored in the future, never able to stay in the past for very long.

That timeframe gives us our first real link to the Short Treks episode “Calypso” which preceded Season 2. That mini-episode takes place 1,000 years in the future, with Discovery abandoned and its onboard AI fully sentient (which my guess has something to do with Airiam uploading her memories to the ship’s computer a couple episodes ago). With this connection to “Calypso,” the only Short Trek that hasn’t been integrated into Season 2 is the Harry Mudd episode, and I wonder if his convincing android-building skills will get pressed into service in some way.

With Burnham’s mother stuck in the future, she saw firsthand the result of Control’s devastation—the obliteration of all life in the galaxy—and has been working via time jumps into the past to change history. We learn that it was she who moved the ancient sphere into Discovery‘s flight path in the hopes that the crew would be able to either destroy the sphere or safeguard the information it had accumulated over millennia.

So from her 800+ excursions into the past, she was able to watch Michael grow up and mature into the strong woman in service to Starfleet that she became. But what’s most interesting about this is that she knows exactly who Philippa Georgiou is—former Empress of the Terran Empire in the Mirror Universe.

She reveals that Georgiou will eventually sacrifice her own life to save Michael’s. We’ve seen her in recent episodes challenge and undermine Leland in presumably a power grab to gain control of Section 31. Here, she suspects that he isn’t quite himself and works with Tyler against him to save both Burnhams and keep him from downloading the sphere information. In the end, she attacks him, going full Crouching Tiger Hidden Dragon on him. Is it possible we’re seeing a transformation of Georgiou as well?

One big question remains, though: Throughout this season, the manifestation of the Red Angel has accompanied the appearance of seven red signals—bursts of energy that have shown up around the galaxy. There has always seemed to be a correlation between the two. But Burnham’s mom seems to know nothing of these bursts. So where have they come from? What’s behind them? How have they led the Discovery to places where the Red Angel would appear?

The showrunners of Star Trek: Discovery have promised us that everything we see on screen fits—or will fit—into preexisting canon. Fans, especially the show’s vocal detractors, have been skeptical. Spore drive, holographic communications systems, artificial intelligence far in advance of what we’ve seen in Star Trek: The Original Series, which is set 10 years after Star Trek: Discovery, etc. We’ve seen the gradual whittling away of some of that stuff, with the groundwork being laid for the eventual doing away with a lot of the particularly incongruous DSC elements.

Captain Pike, for instance, stated early on this season that he prefers screen-to-screen communication and doesn’t like reliance on the holographic system. But in this episode especially, we can see how Starfleet might regress into a period of technological simplicity over flashy high-tech implements. With Control infected by an advanced future AI that becomes sentient by assimilating information gained from an ancient sphere, one can see how, once this threat is eliminated, the Federation might do away with all AI-based technology and more “basic” systems, leading to ships that look and function like the USS Enterprise that we see in The Original Series.

Note the use of the word “assimilate” there. Control takes over Captain Leland’s body and uses it as its own vessel. It does so by injecting what appears to be nanobots into his system, which begin to transform his physiognomy. Sounds rather Borg-like, doesn’t it? Many fans are speculating that we’re seeing the birth of the Borg here. However, it’s pretty well established that the Borg originated at least a thousand years prior to this in a different part of the galaxy. So is this Borg? Is this parallel development of some other kind of threat? Do the Borg really start here and then somehow get displaced temporally and spatially to the Delta Quadrant of the long past?

We’ll find out soon. There are only three episodes of Star Trek: Discovery left in Season 2. The next one—no title revealed yet—is Thursday, April 4 on CBS All Access at 8:30. 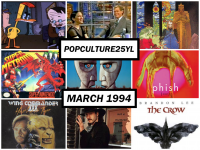