Sometime in the year 2000, at seventeen years old, I caught Takeshi Kitano’s American debut film, Brother, on HBO. Shocked by the incongruity of its beauty and violence, I had to figure out what this director was all about. Upon further research, I discovered Takeshi Kitano was also Brother’s lead actor, there billed as “Beat” Takeshi, so I had a face to match the name.

Upon the first Christmas after seeing Brother, I received a gift from my mom decked out in Japanese kanji. I opened the package to find a DVD copy of Brother wrapped in plastic with IMPORT, in big red stamped letters. My dear mother thought the film was a foreign film and had it imported from Japan. God Bless. 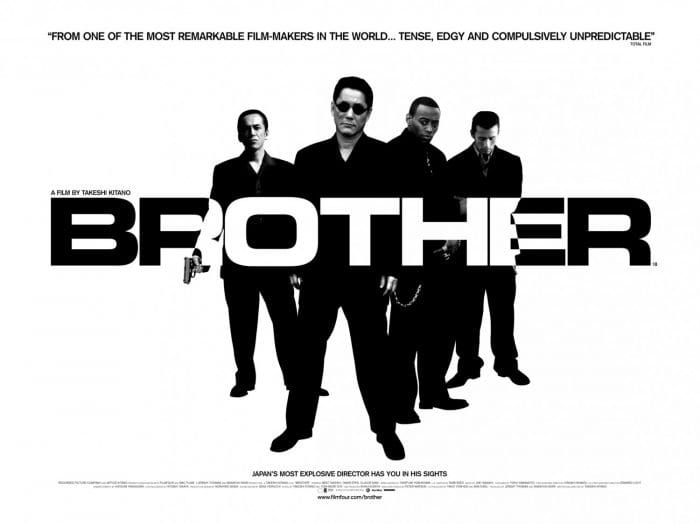 And with that accidentally exotic package, my goal to be a yakuza film historian began. And while I haven’t made as much progress as I’d like in the field of Yakuza Film Knowledge, I did consume “Beat” Takeshi Kitano as often as possible, as he was already familiar to me. And what a journey it has been as Brother, still a very respectable crime flick with striking visuals, turned out to be a second-tier movie in his filmography.

Oddly enough, “Beat” Takeshi started out as a comedian. Many Americans of a certain age might know him by accident from Japan’s hit children’s show Takeshi’s Castle, a pre-Ninja Warrior type show, which was redubbed and repackaged on Spike TV in the US as Most Extreme Elimination Challenge, or MXC.

And while Takeshi did find popularity and fame as a comedian, it appears his aspirations were for a more serious fare. In 1989, Kitano had his chance to change the face of his career. To put Kitano’s career change in perspective, try to remember when Jim Carrey started doing serious roles for the first time in his career. The shock of seeing the buffoonish and loud Carrey play subtle and sad characters was itself a special effect. That same effect, at least on a nationwide Japanese level, was the same when Kitano directed and starred in Violent Cop in 1989. 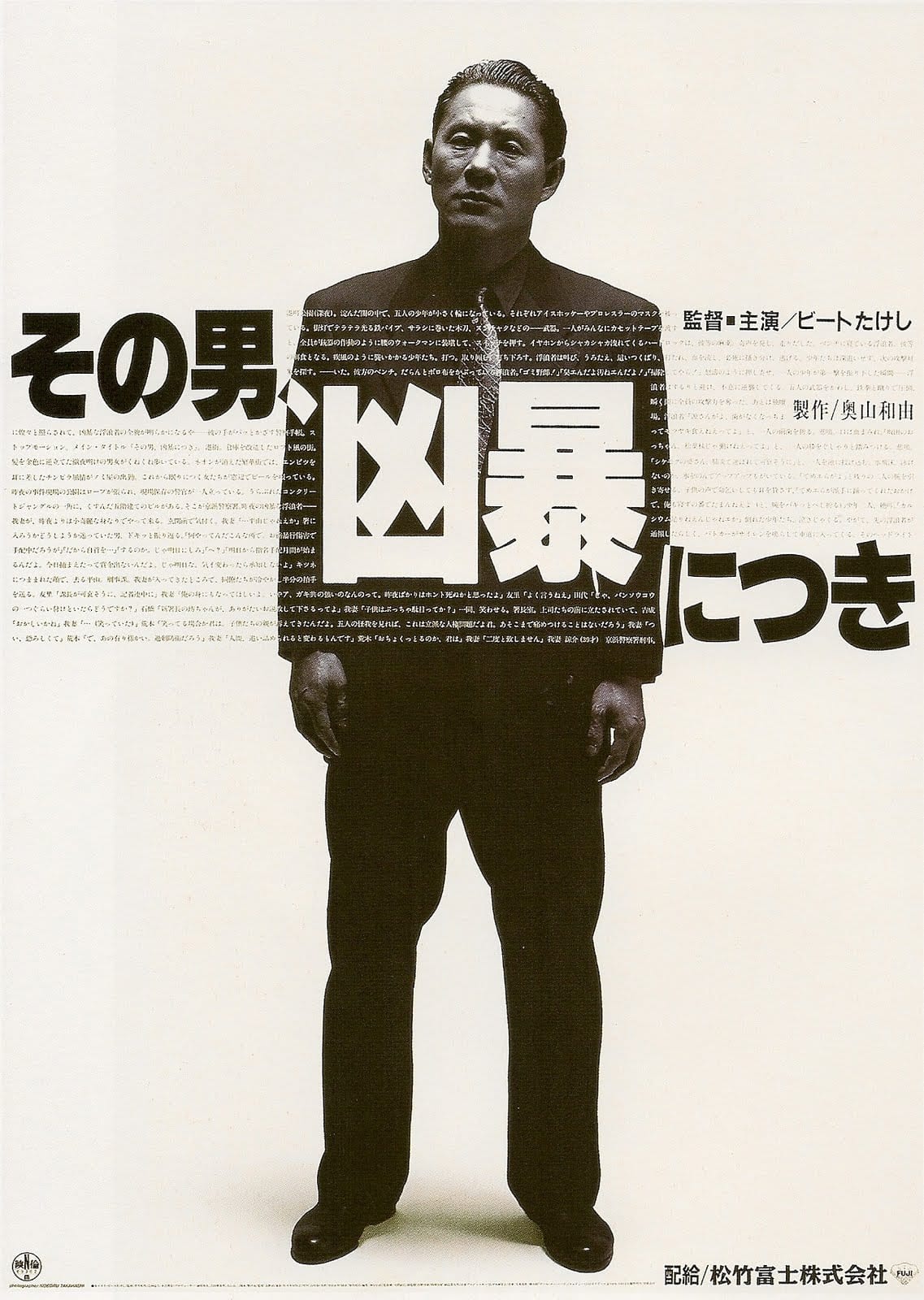 Violent Cop is a fascinating cinematic experience, primarily because it takes the built-in expectations of a crime film and reverse engineers them into a strange hybrid. Mixing laborious long takes of walking with spine-tingling rushes of ultra-violence, Violent Cop is an unsettling but ultimately “cool” experiment. For Kitano first-timers, the cacophony of themes, like those I experienced in Brother, will be both off-putting but entirely intoxicating.

The hero, or antihero, of Violent Cop is Azuma (Beat Takeshi) who, well, is a cop who happens to be violent as hell. Azuma doesn’t exactly dig the protect concept in “protect and serve”. In the film’s opening scene, a group of young toughs harass and nearly beat to death a homeless man for kicks. As we soon discover, Azuma watched all this happen. However, he goes to one of the boy’s homes and smacks the living tar out of him and tells him to come to the station the next day, with his buddies, and confess.

This is Azuma in a nutshell: let the crime happen and then exact street justice. In other words, Azuma is not a by-the-book character. Much like a Dirty Harry film, Azuma takes on a nervous rookie, who discovers that not only does Azuma enact violence with a smile or, at worst, indifference (during one chase scene, Azuma gladly hits a perpetrator with his car), Azuma is also a slacker who bums money off of people, has others do his work, hates authority, and hangs out with gun smugglers with illegal gambling machines.

There do appear to be three things that Azuma does hold dear though. For one, he likes walking everywhere; the man likes getting his steps! Secondly, his mentally ill sister Akari, who has just returned home from the hospital, is in need of care and while Azuma isn’t great at watching after her, he does at least try. Lastly, he doesn’t like cop killers, even if the cops were dirty.

When the suicide of Azuma’s coworker and friend Iwaki is revealed to actually be a murder at the hands of local drug dealers, Azuma goes on a mission to wipe out not only the drug kingpin, Nitou, but also Nitou’s insane assassin Kiyohiro. Keeping in character, Azuma doesn’t care that Iwaki was actually Nitou’s supplier of drugs (even though he had his reasons), he only cares that his friend was killed by a bunch of greedy punks. In Azuma’s world, it is okay to be a dirty cop but some lines, like killing one of those dirty cops, must be drawn. 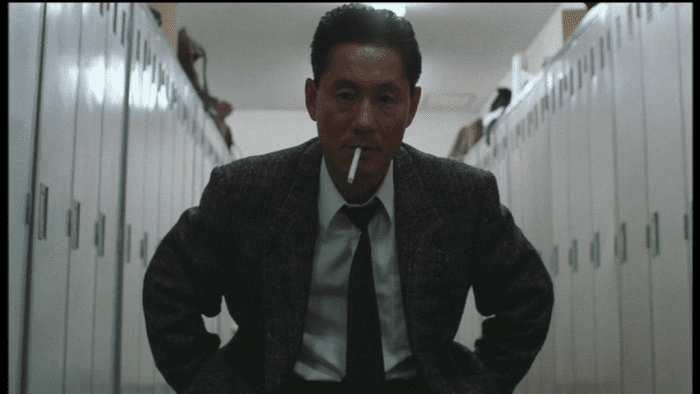 Despite the fact that Kitano had never directed anything and was known for comedy, his inexperience led to a distinctive style of filmmaking. I sometimes dub Kitano the “Michael Mann of Japan”, simply based on his pacing, his shot selection, his use of location, and how he utilizes music.

A standard shot in Violent Cop will start with Azuma from far away as he slowly comes towards the camera. There will be a large depth of field to show everyday life going on in the background and the sidelines, all while a repetitive measure of music replays itself. It is hypnotic and may try some viewer’s patience but it firmly establishes an exotic setting (at least for Americans) as well as ground you in realism. This is a style choice…by being almost anti-stylish.

But while Kitano’s sense of action might not be too kinetic, his ability to set a scene, especially in locations of which there is little movement, makes Violent Cop something you can hit pause on and appreciate as a still picture.

Not to mention Kitano’s artistry when it comes to violence. He would get pretty existential in future films, such as Sonatine, where the violence is statue-like and alluring, but in Violent Cop, it is the unexpected bursts of violence, and how shockingly gory and disconcerting they are, that makes them so unique.

Amongst the brain bursting bat attacks or the explosion of a mouth from a bullet, Kitano defies the breezy comfort of some of his long shots with other scenes featuring drug use, torture tactics, and gang rape. A one-minute-long walking sequence will be followed by a sudden smash cut to a suspect being tortured inside a police station. Below is a good example of all these aesthetics coming together:

*don’t watch the below scene if you have not seen the film, as it contains spoilers for the film’s ending

Obviously, Violent Cop isn’t for everyone. Without any clear heroes, a large amount of sudden, graphic violence, and a love-it-or-hate-it filming style, Violent Cop can be a depressing 103 minutes. But for those interested in discovering Japanese crime cinema from one of the modern masters, a little discomfort is no big deal. Violent Cop may not be Takeshi Kitano’s most ambitious film, but it certainly is one of his most visceral and uncomfortable ones, which marks the sign of a good film to me.

You can catch Violent Cop on Shudder now.