The first two episodes of the new Twilight Zone used spooky, high-concept ideas to create a lot of tension and fun “what-will-happen-next” scenarios. However, those first two episodes had stakes that only affected the specific characters contained in the episode. The third episode released, “Replay,” still uses these concepts but extends the stakes from the fictional universe into reality; it is science-fiction allegory made flesh.

The sole writing credit is given to Selwyn Seyfu Hinds, an English and African American Studies graduate of Princeton, who has written or edited for publications like The Source, Village Voice, The New York Times, and DC Comics as well as producing news content on BET. “Replay” appears to be his first writing credit for television and it is an impressive way to start, fusing the expected gimmickry of “technology gone amok” with powerful social commentary. 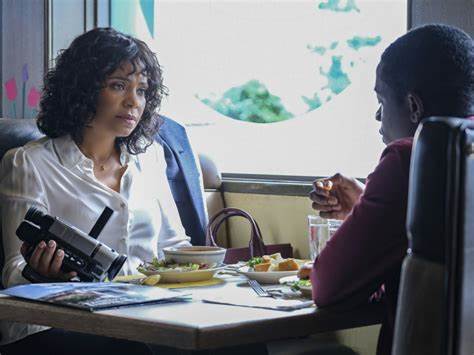 This might be one of the first episodes that shows the clear oversight of Jordan Peele, the director/writer/producer auteur who is literally changing the way we consume and view race in the media. “Replay” feels no need to hide its aspirations or bathe what it is trying to say in subtlety. And that is the point: the hair standing on the back of your neck is meant to not only make you feel for the characters contained inside the episode but for any person of color living in present-day America.

Ironically, as I was typing this review, a CNN push notification popped up on my phone: “New video shows police officers drag a 16-year-old girl down the stairs of a Chicago school and punch her repeatedly.” It gave me chills because it almost echoes “Replay” beat for beat, even down to the concept of the use of video.

I do have to admit, when I saw the trailer for “Replay” I was a bit disappointed. “Nightmare at 30,000 Feet” already used the idea of a piece of technology messing with the space-time continuum. But, upon viewing, you realize “Nightmare” used that technology literally. “Replay” does have a techno-gimmick—in this case, an “ancient” camcorder that can rewind time specifically for its user—but instead makes it a MacGuffin that opens up the episode for further discussion.

In “Replay,” a successful, single mother named Nina (Sanaa Lathan) is escorting her aspiring filmmaker son Dorian (Damson Idris) to an all-black college somewhere in the rural US. The story begins at a diner where Nina and Dorian are enjoying a nice meal and discussing their future and their past. Nina is a powerful lawyer who has essentially abandoned her former life, sheltering her son from the violence of her older neighbor and the activism of her family. Dorian, interested in the socially aware films of Ryan Coogler, wants to embrace his mother’s side of the family but is usually met with dismissal.

Before Nina and Dorian leave, a white police officer (an eerie Glenn Fleshler) enters the diner and views Nina and Dorian with suspicion. Used to this, Nina brushes it off and leaves. Later, as they are driving down the road, the cop pulls them over and goes ballistic when he thinks he is being recorded on the camcorder. Nina accidentally hits the rewind button in a panic, trying to turn the camera off, and finds herself back at the diner again, wondering what is happening.

Every time Nina and Dorian leave the diner, they are inevitably pursued by the cop and each time they meet, the conclusion ends up worse and worse. Luckily, Nina has the camcorder to rewind time. But is she stuck in an endless loop where she will be hunted by the police officer forever? And, most importantly, because of this evil repetition, will her son ever get to college?

For a 45-minute episode, “Replay” packs in a lot of content, effectively summarizing the black experience in America in many stages. There are looks of suspicion from white people in general (at one point, the cop asks Nina how she could afford a nice Volvo). There is the misconception that an angry black man is violent and a threat (in one scenario, the cop kills Dorian for reaching for his cell phone). And, in the pulse-pounding ending, when Nina, Dorian, and her estranged Uncle Neil (Steve Harris) attempt to evade the cop by taking underground tunnels and secret passageways, the concept of slavery and the Underground Railroad is alluded to.

The ultimate goal is for Dorian to get to college, quite literally. And the metaphor of Dorian constantly being held up from that goal, either by death or constant subversion, is a thrilling but ultimately sad one. For there are a lot of Dorians in the world who, for many reasons, can’t seem to get to the literal gates and cross the threshold.

This episode is likely to be divisive for those uncomfortable with facing racial inequality. One only needs to look at last year’s slate of Academy Award Best Picture nominees. On one side of the spectrum, you had BlackkKlansman, a film that ends with a harrowing view of today’s America. That film leaves the viewer uncomfortable and, hopefully, willing to make changes. Controversial Best Picture winner Green Book creates the allusion that racism is “solved” at the end, thus making the audience go home satisfied.

Episodes of The Twilight Zone, as well as films like Black Panther (also a Best Picture nominee and frequently referenced in the episode), exist to show that racism is not only embedded in the DNA of the country but is also not so easily solved. At one point in “Replay,” Nina goes back in time to the diner to confront the officer while he is eating, to try to explain to him what it is like to be a single mother of color in America. Sadly, despite outward platitudes, it falls on deaf ears.

While the episode’s climax is a victory for Nina and Dorian—as Dorian, thanks to an army of students recording the seemingly demonic cop pulling his gun on Nina, passes through the gate—the very end is quite haunting. We flash forward to the not-too-distant future, where Dorian has children of his own. Nina still protectively holds on to her camcorder, ready to use its immense power to make things right if she needs to.

When Dorian’s daughter takes the camera and accidentally drops it, shattering it, Nina is in shock as she no longer has the ability to control her and her son’s fates in this dangerous world. Jordan Peele, as Rod Serling narrator, concludes the episode with this: “But for some evils, there are no magical, permanent solutions, and the future remains uncertain even here in The Twilight Zone.”