After I watched last week’s episode of Barry I was left with this realization: Barry’s going to get caught.

He walked out of Esther’s temple and he was seen by everyone in it. I could see him making tough decisions where he has to keep killing the one or two people who could identify him, but this time—on top of everything else already—there’s just too much. Too many people have seen our Clark Kent take off his proverbial glasses.

Yet in this week’s episode, we see Barry stick to his (lack of) guns. He refused to kill Hank and that funny excuse of a Number 2. He continued to refuse to kill Esther. He even made a good exit strategy: Train Hank’s men and Barry’s debt is paid. He can walk away.

But it’s not going to work. I understand that now.

The title of this week’s Barry episode is “Past = Present x Future Over Yesterday.” And through the course of the episode, each main character is actually doing this existential math equation about themselves.

They think their past can be made from where they are presently, put through the multiplier of a percentage that is formed from where they want to be and where they were yesterday. But it doesn’t work like that. You can’t define your past based on just one yesterday. You have to take into account all the yesterdays, not just the one after you decide to make a change. The formula in the title equals something—Thing To Strive For, maybe—but it’s not Past.

Barry—and all the other main characters—need to come up with a different equation. What they pretend happened didn’t actually happen, no matter how much they want it. They need to reckon with their actual pasts. 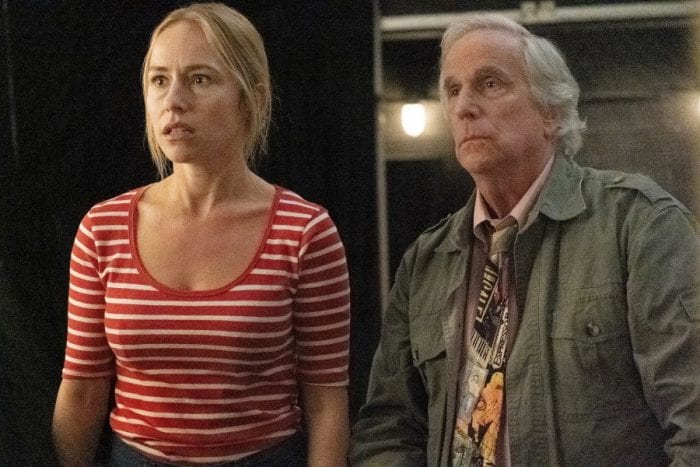 NoHo Hank—I’m sorry, Northern Hollywood Henry (so good!)—has a dream about being on a panel for SmartPeople channel, and he gets to school all the sociologists because only he knows what really solves the community’s problems. And then he wakes up being completely wrong about Esther’s fate. And adding insult to injury he and his guys get banished to a storage unit to make room for Esther’s crew since they now feel unsafe at their house. Major backfire, Hank.

And what does he do? Not take the advice of his Number 2—”go to Ikea, get an area rug, a couple beanbag chairs.” Hank’s big idea? This sadly delivered line: “We have to kill Barry.”

Gene goes to his son with a proposition to go into business together, except that business is his son being the groundskeeper of the cabin where his girlfriend got killed. Gene ignores the fact that he abandoned his son years ago and that might have burned the bridge. He thinks the bridge just needs a little mending and he can repurpose the place where recent trauma happened. Efficiency!

To work on her acting scene, Sally Skypes with her friend who was there for the actual confrontation between her and her ex, Sam. Sally’s friend said Sally was a mess with welts on her neck, but beyond that we get our eyes opened. It was Sally’s friend who brought a bat. And Sally had no chance to actually yell at him and tell him she was done. She had no room to leave from a point of strength. In reality, Sam was passed out. The ladies went in, grabbed Sally’s things and took off. Different than Sally remembers, and she’s as confused as the rest of us. Why wouldn’t her actual past just conform to her narrative already? When she talks to Barry later, she says her friend basically “remembers it the way I do.” Even though we know better.

Barry’s improving in this arena. He’s creating a good moral framework to work within as far as killing people goes, but he still can’t quite pull off honesty about his past, as we’ll see with the well-meaning Braveheart plagiarism later.

Just like Gene imagines his relationship with his son or Sally imagines the way she left her ex, just like Hank dreamed about life as a super smart big shot, we first see Barry presenting his story to the class before we’re shown that he’s imagining those events as he writes his scene in his room. It’s another literal juxtaposition of “what you want” versus “what you are.”

And what Barry is living is a life that gets him shot at (poorly) from across the roof by Hank’s Number 2. We get a genuinely real moment where Hank tells Barry to shoot him since without Esther dead that makes Hank dead already anyway. This is where we see Barry make a choice again to not kill. He’s genuinely trying to walk the walk, which is why the real moment is earned. Even Hank throwing up from the intensity is amazingly delivered. Anthony Carrigan once again puts in an MVP performance as NoHo Hank. Anyone who can go from almost dying to a comedic rooftop dance celebration on a dime deserves the nod.

But why the dancing? Barry says he’ll train Hank’s guys, and that’ll return his debt. Everybody wins. And then we get the gloriously funny scene where Barry trains Hank’s guys.

While assessing their skills, a great gag happens when Hank’s hired translator is found unnecessary. We also see Barry realizing that his classmate and Lululemon coworker calls him Jarhead instead of friend, another small gulf between what he thought and what was. And we see the doofy looking Chechnian turn out to be a crack shot rather than a bumbler, and Barry sees himself in the man’s happiness at feeling included. Barry’s so much further ahead than the other main characters.

Another gulf between “what you want” and “what you are” comes from Fuches and Detective Loach. At the quinceanera store we see Loach coaching Fuches through an interrogation where he demands to know if Barry killed Detective Moss. When Fuches walks into the Lululemon later on, we get two guys who just want to talk to someone who knows what their situation is all about.

Except what does Barry learn from this? To be entertaining. To give the class a Braveheart moment instead of the truth. And we see it happening, we see how unreal it is, as the people in the Afghanistan war location stop everything and listen to Barry deliver the speech. The only thing that made it more unreal was when Gene steps into that scene.

It breaks to the acting class set and Gene forces Barry to instead step into the role of Sally’s ex, Sam, in her scene. And Barry rightly so doesn’t want to do that. He refuses violence again. Relationship with truth? C at best. Relationship with moral compass? B+ easy.

Sally goes at Barry, practically forcing him to choke her. She wanted to give him the energy to tap into some kind of anger but all Barry wants to do is storm away from the whole class. He wouldn’t hurt her and I commend him for that one. It was a ridiculous situation and Barry at least understood that one.

Except Sally catches up to Barry in the parking lot, where the real Sam was. And then we see Barry lock-on ready to kill. Because he believes something Sally told him rather than the real story of how she left. Which I’m sure is more complicated than we’re led to believe, based on everyone else’s story arcs.

One day, Barry and Sally are going to learn about each other’s real pasts, and that day may be as early as next episode. But will it happen before Barry kills Sam? And will it be before Detective Loach gets his man?