In the realm of mass media, Japan is often viewed as an exotic other. In general, Americans, without malice, see Japan as it is presented in the movies or on television: through the lens of outlandish technology and even more outlandish pop culture. For those not willing to dig deeper, Japan is bright colors and anime with quirky television shows and even quirkier social habits.

While Japan is those things, many tend to forget that it is also a wholly formed society with political, social, and economic values similar to our own. The Japan we see now is a relatively new country. After World War II ended, Japan was occupied by the United States throughout the late forties and early fifties. Their elimination of a godlike-emperor-led monarchy, as well as massive restrictions on their military use, fundamentally changed their entire approach to existence.

No longer imperial in aspiration, or without the ability to be so even if desired, Japan focused on modernization and pacifism. When American occupation ended in 1952, Japan was basically a new country writing its own rules and, thus, is, as of 2019, still a relatively young culture developing with an interesting mixture of ancient traditions, American ideas and reforms, and a wholly embraced approach to burgeoning technological innovation.

I mention all this because director/writer/editor/producer Hirokazu Koreeda’s most recent film, Shoplifters, is an emotional movie that shows the economic woes and the lower classes of Japanese life that we, as foreigners, don’t often see. Stripped of any stereotypical Japanese tropes, at least from the American expectation, Shoplifters examines how a lower class family makes it through economic hard times.

Shoplifters focuses on the Shibata family, made up of husband and wife Osamu (Lily Franky) and Nobuyo (Sakura Ando), their grandmother Hatsue (Kirin Kiki, in her final film role), who owns the house and is the main breadwinner thanks to a pension, young Shota (Kairi Jo) and occasional occupant, and half-sister to Nobuyo, Aki (Mayu Matsuoka). Living in secret with Hatsue, the Shibta clan makes due with day labor jobs or factory work. Since that doesn’t always make ends meet, Osamu and Shota have developed a language of hand signals to shoplift groceries and sellable goods to keep the family eating.

One night, returning from a successful heist of noodles and sweets, Osamu and Shota come across a little girl named Yuri. Osamu and Shota have seen Yuri alone many times and, due to cold weather, decide to take her home to get some food. Coupled with finding signs of alarming abuse and, on their way to returning Yuri, hearing the parents fighting and declaring they never wanted Yuri to begin with, Nobuyo makes the bold choice to keep Yuri as protection.

As time goes on, and Yuri is reported as either kidnapped or murdered, the Shibata’s teach Yuri a new life: one of love but also one of theft and grift. Yuri especially bonds with Shota, who reluctantly takes his “sister” under his wing as their school-less days involve wandering through Tokyo and stealing when they need (or want) to. But with Hatsue’s final days approaching, and secrets continuing to emerge from the inner circle, the family that means well may be torn apart.

The last two years of film has had a wonderful collection of stories revolving around lost innocence. In 2017, The Florida Project looked at low-income communities that exist right outside of Disney World in Florida where single parents and runaways make ends-meet through grift, panhandling, and sex work all while living month to month in a hotel that begrudgingly accepts their presence. At the heart of it was a six year old girl slowly realizing her magical, no-rules world is coming at a very real cost.

In 2018, a sister film to The Florida Project was released called Eighth Grade, which examined a middle-school teenage girl’s transition from middle school to high school but also the awkwardness of becoming an adult. Shown from the opposite angle of The Florida Project, the children and parents in Eighth Grade are economically sound, rich even, and the main character’s plight deals more with social media saturation and burgeoning sexuality, both good and bad.

I consider Shoplifters the third part of what I dub the Lost Innocence Trilogy. The Florida Project and Eighth Grade do show the adult side of things but their message is primarily felt through the young characters that inhabit that world. Shoplifters functions the same: there are a large number of adult characters but the core thesis emanates through rambunctious Shota and beyond-adorable Yuri.

In all three of the films mentioned above, there is a particular moment when each child character sees the bridge between childhood and adulthood and are forced to take it; all three of these moments are emotionally gut-punching and heart-breaking. Having excellent, naturalistic children to play the roles helps and Shoplifters especially has that with young Kairi Jo as Shota and Miyu Sasaki as Yuri. Both, it should be noted, make their film debuts in Shoplifters.

But what makes Shoplifters work especially is that sense of realism that is missing from a lot of Japanese films exposed to those outside of Japan. This is a sobering account of poor life in a big city, aided by the casting of not only realistic child actors but fairly “normal” looking stars. That isn’t to say the actors aren’t attractive (Sakura Ando is as alluring as she is quick-witted and snarky) but they feel like people you’d meet in the street. This helps in selling the plight of the characters, who find love and companionship despite a cluttered life with no guarantees. 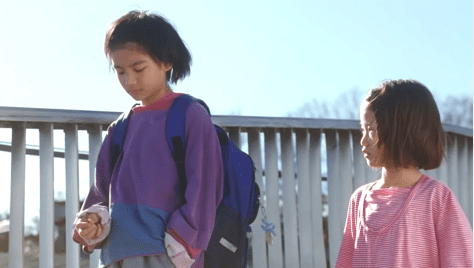 While Shoplifters never gets as dark as the other two films in the Lost Innocence Trilogy but it also never allows easy comfort. The characters are at times lazy and proud but also ethical in their own way. It shows them all as gray, and not simply black and white. Each character, from Osamu’s goldbricking at construction jobs to Aki’s emotional conflicts with being a peep show performer, has a weakness that is equally buttressed by a strength.

It is compelling cinema that not only makes you question some of the romanticized visions of Japan that are sold to foreigners, but also makes you realize that in this human game called life, we are all players trying to just make it. Some of us do better than others but we respect the ones that try. Shoplifters is about the ones that try, warts and all.