“All happy families resemble one another, each unhappy family is unhappy in its own way”. If we apply Tolstoy’s words to film, Yorgos Lanthimos has probably given us some of the unhappiest families to ever grace the silver screen; From The Killing of a Sacred Deer, in which a father is forced to sacrifice a member of his family, to The Lobster, where children are assigned to couples as a medium to appease their fighting. After the success of The Favourite, Lanthimos has become a household name in the realm of Art House cinema, and his English-language films are gradually gaining a bigger audience. However, I believe that it is his earlier, Greek films that establish him as a master of the bizarre and the uncomfortable. If The Killing of a Sacred Deer is based on myth and legend, Dogtooth creates its own mythology by twisting what would normally be a series of everyday occurrences into perverse nightmares. This is not a film for the faint-hearted, and it is everything but family friendly.

The idea for Dogtooth (Kynodontas in the original Greek title) occurred as a result of a conversation between Lanthimos and two of his friends, who were about to get married and were thinking about having children. Lanthimos emphatically suggested that in contemporary society marriage was no longer useful. As his friends became immediately defensive, Lanthimos realized how family and marriage were still very much a taboo subject, one whose stability shouldn’t be questioned. He imagined the story of a man, whose protective dominance over his household would ultimately lead to their downfall. And thus, Dogtooth was born. What gives the story an even more spine-chilling twist is that in 2008, after the screenplay was written, the infamous crime perpetrated by Josef Fritzl (who locked up, abused and raped his daughter for 24 years) came to light, making Dogtooth a disturbingly topical film.

Dogtooth revolves around a family of six living in a large house complete with swimming pool and backyard. Lanthimos purposefully chose a lavish and extensive backdrop to juxtapose what he considered to be a claustrophobic subject. Aside from what many would consider an idyllic setting, this household is far from average as the parents (Christos Stergioglou and Michele Valley) act as puppet-masters over their children’s lives.  Sheltered from the outside world, the two daughters (Lanthimos regular Angeliki Papoulia and Mary Tsoni) and the son (Hristos Passalis) have no perception whatsoever of real life, which is powerfully encapsulated in their first encounter with a cat.

They are trapped in their own home and, even though they have plenty of time to frolic around, these soon-to-be adults have been robbed of their own development. To entertain themselves, the three kids invent “games” that stem from their parents’ teachings: they believe that the planes they see in the sky are toys which land when the parents throw them on the ground and often play with their imaginary brother, whom they believe lives over the fence. If they are good, they are rewarded with stickers, but bad behaviour brings violent consequences.

Nonetheless, the most chilling aspect of the children’s brainwashing is the way in which the parents manipulate words and their meanings. “Motorway” is transformed into “a very small wind” and “excursion” is a “hard material used for making floors”. This distortion of the correspondence between form and meaning is reminiscent of Dadaist and Surrealist art, particularly the works of René Magritte. In his series of paintings entitled “La clef des songes”, Magritte gives familiar objects unfamiliar names. What pushed him to do this was “the obsessional urge to give meanings to things so as to use them or dominate them”. This is exactly the father’s aim in Dogtooth: by holding the key to fiction and reality he uses and dominates his children. 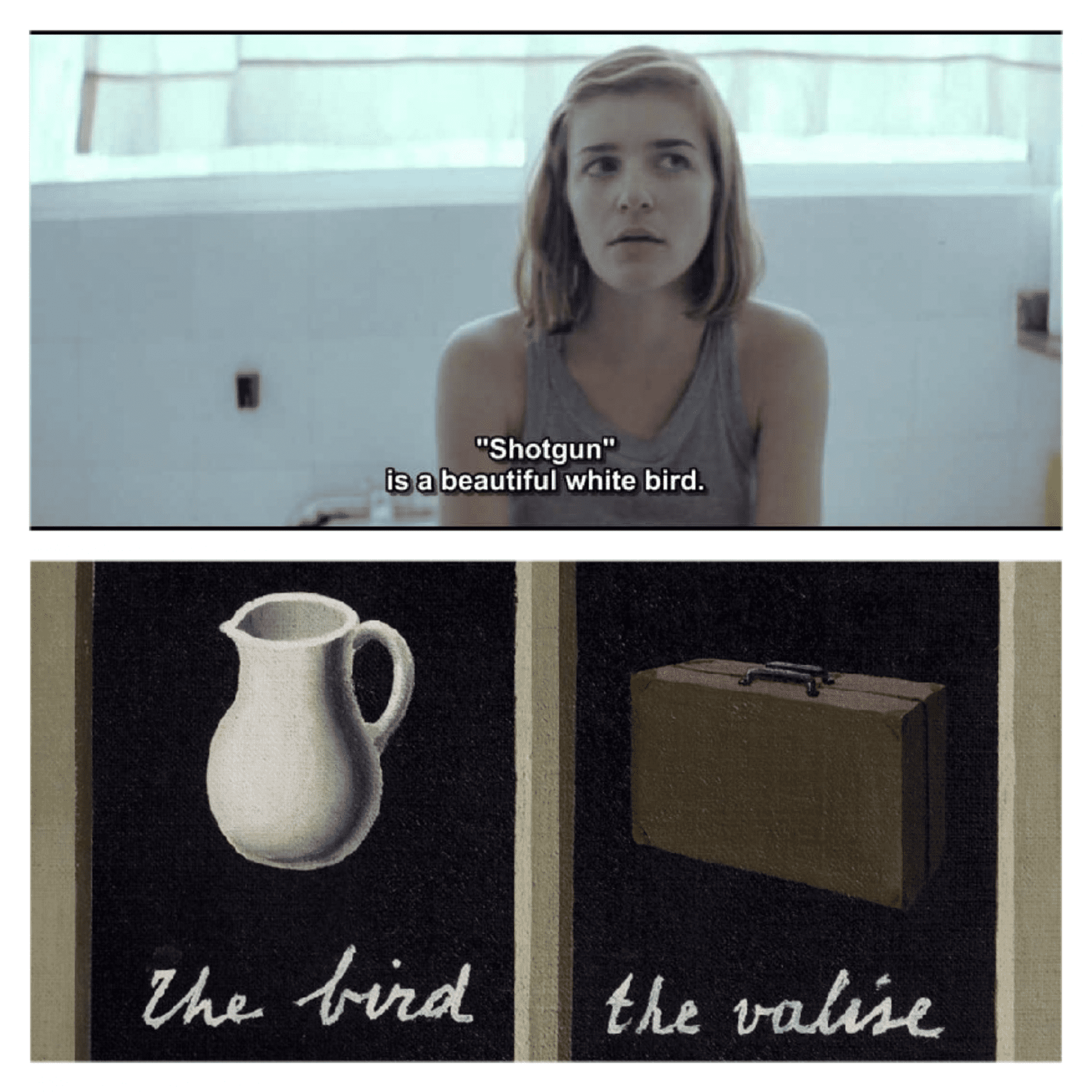 Part of the father’s plan relies on the regulation of sex and desire, which is when the main conflict of the film arises. In order to keep his son’s sexual desires in check, the father hires his firm’s security officer, Christina (Anna Kalaitzidou). Lanthimos presents sex as a duty, as the son’s methodical sessions with Christina are free from erotic passion. This lack of affection quickly proves unsatisfying for Christina, as she turns her attention towards the eldest daughter. Although Christina is the only character with a specific name, we know little about her life outside the house. Her role is that of a femme fatale, a temptress who brings chaos into the family’s precisely articulated lifestyle. This chaos comes in the form of a pair of VHS tapes, which Christina gives to the eldest daughter in exchange for oral sex. After viewing these movies, the eldest daughter’s world is thrown into turmoil, when she learns of her parents’ deception and the possibility of escape enters her mind.

Lanthimos’s mélange of movies and sexuality is reminiscent of another controversial film: Bernardo Bertolucci’s The Dreamers. Whereas in Dogtooth, the children are destroyed by physical and mental imprisonment, the protagonists of The Dreamers are the product of too much freedom. The Dreamers tracks the story of Mathew, a whimsical American student who travels to Paris in 1968. There he meets the twins Isabelle (Eva Green) and Theo (Louis Garrel). Left to roam in the siblings’ luxurious apartment, the three youths bond over their love of film as their relationship gradually becomes more sexual and decadent. In both Dogtooth and The Dreamers, cinema is a tool in the discovery of sexuality. 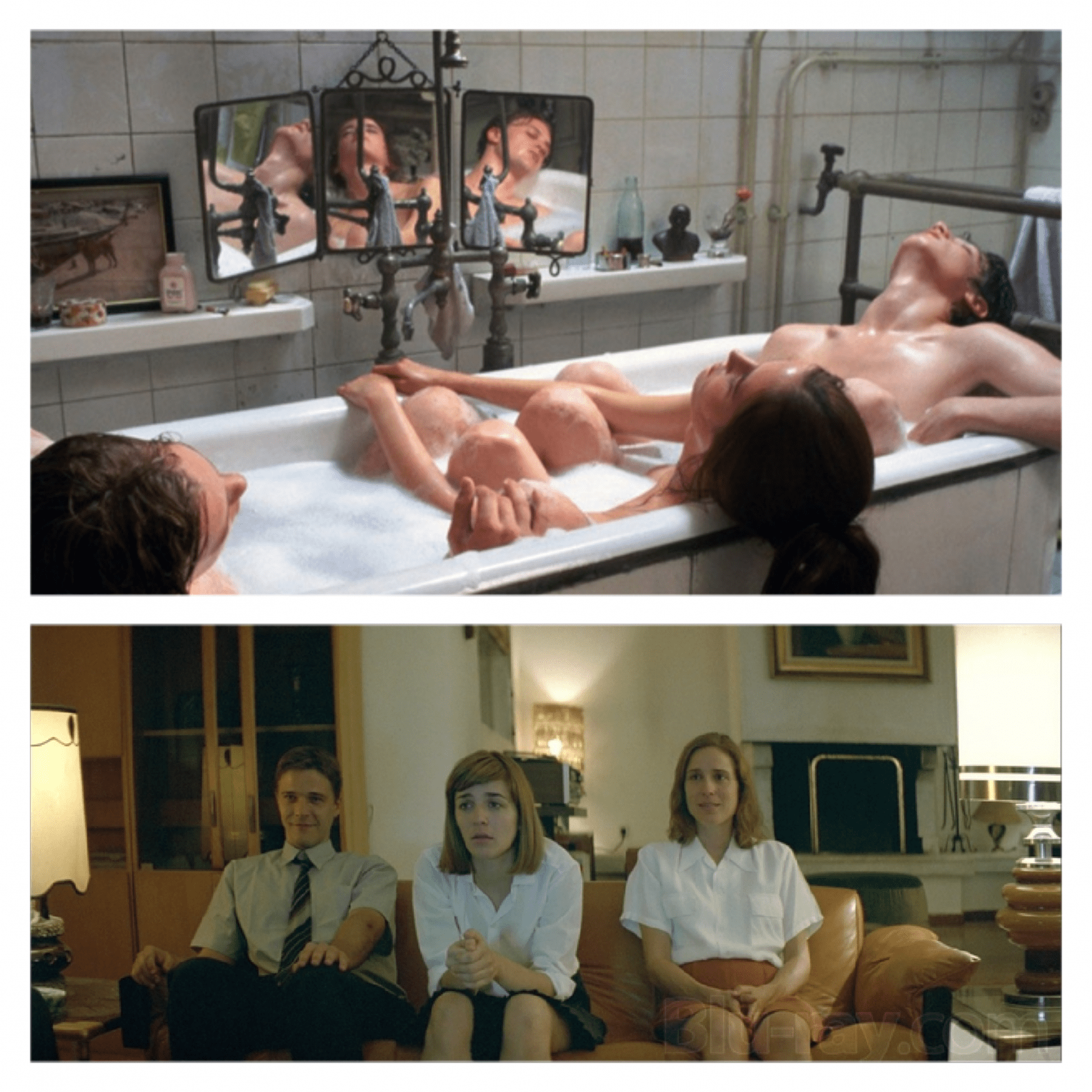 When in Dogtooth the eldest daughter views the Flashdance, Rocky and Jaws VHS tapes supplied by Christina, she assimilates their vocabulary in association with her sexual life. After the father fires Christina, he decides that it is best for the son to continue his sexual exploration with a person who can never exit the house, in other words, one of his sisters. The son chooses the eldest daughter and, following their first interaction, she reacts by reproducing typical movie speak: “Do that again, bitch, and I’ll rip your guts out. I swear on my daughter’s life you and your clan won’t last long in this neighbourhood”.

In a similar vein, Isabelle in The Dreamers also connects the language of cinema with that of sex. During one of her many scenes of seduction, Isabelle conquers Matthew’s heart by re-enacting a scene from the Greta Garbo version of Queen Christina. However, sex in The Dreamers is presented as a primarily erotic pleasure, one that is a result of the romanticized Parisian atmosphere. Dogtooth’s depiction of sex is radical because it is explicit without being arousing. Lanthimos immerses his viewers in an intensely uncomfortable experience because the characters’ interactions are estranged in themselves, as well as being divorced from convention, which makes the narrative thrust so alien to us. 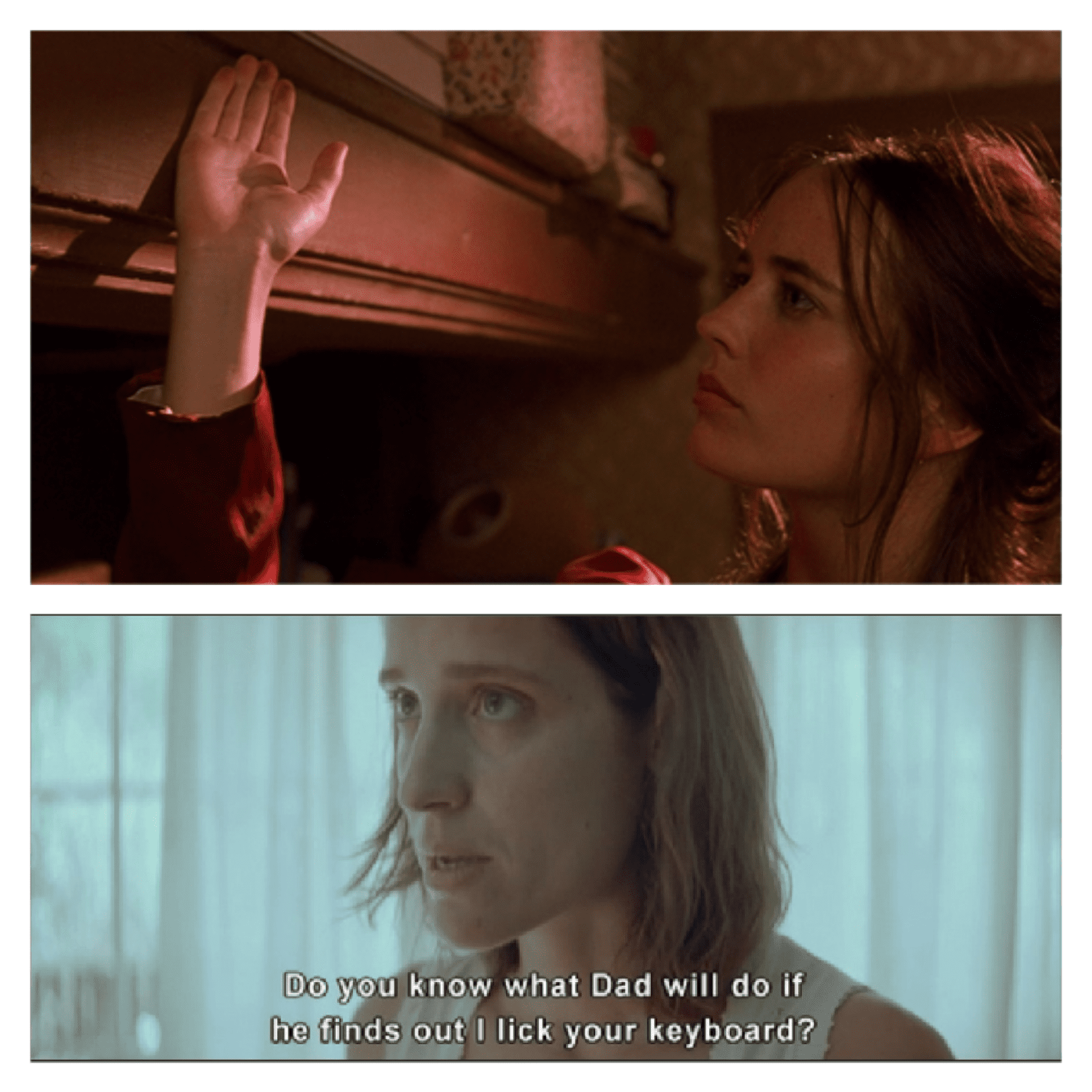 The most famous scene in Dogtooth is also my favourite. It occurs near the end of the film, when the eldest daughter is at the climax of wanting to break free from her confined surroundings. The parents decide to celebrate their wedding anniversary and, as part of the celebration, the children put on a dance recital, where the son plays the guitar while the two girls perform an impromptu choreography. As the pace of the music increases, the youngest daughter gets tired and sits down, but the eldest daughter continues, dancing more and more furiously. It soon becomes evident that she is incorporating elements of Flashdance into her wild frenzy and that, as the song goes, “she has danced into the danger zone when the dancer becomes the dance”. Shocked, the parents put and end to the spectacle, forcing the eldest daughter to sit and eat some cake. It is clear that the damage has been done.

Dogtooth is, on the whole, a mind-bending social commentary that pushes the boundaries of what can be laughed at and what can be taken seriously. It is a film that keeps you at a razor-sharp edge during the whole viewing process until it rapidly crescendos into an ending that will not leave cinema-lovers indifferent. I personally recommend reading Jean Cocteau’s Les Enfants Terribles beforehand, as the book presents a thematic link with the movie and makes the experience twice as enlightening and excruciating. Overall, Dogtooth is an excellent example of Lanthimos’s unflinching direction, earning him the Un Certain Regard award at Cannes, as he creates a visual myth that puts Greek cinema on the map.