We live in a world that has less and less rules and boundaries. As society has gotten more tolerant and liberal, greater freedom than ever has allowed people to live their lives the way that they want. If you wish to indulge any kind of fetish or appetite, as long as it’s legal then you are pretty much free to do so. The proliferation of technology and the internet has only allowed these urges and appetites to grow unabated with endless opportunity for misadventure. There is a constant danger of becoming lost in this world, people lie to themselves constantly in the need to justify why they might indulge an impulse, violating shaky moral codes or trust in relationships, and then get further lost in the spiral, not realising until it’s too late that they themselves are the ones who are lost. Social media has given us all a licence to present our lives the way we want to; reality doesn’t come into it necessarily. Take a photo of yourself with an Instagram camera and then take a photo of yourself with a real camera and you can see what reality is up against. Sometimes it becomes necessary for a wake up call, an intervention, a smack upside the head to bring you back to reality, and accept that you are hurting others and perhaps even more importantly yourself.

Paranoia Agent opens with a sight so familiar from every day, the morning commute to work, people plugged into earpieces or staring at small electronic screens in the palms of their hand; all connected to something and yet not connected to anything resembling humanity. We then meet Tsukiko, the shy young creator of a popular Hello Kitty! like dog named Maromi. Tsukiko is under considerable pressure to come up with the next big thing that her employer can stick on backpacks, balloons and greeting cards and make another fortune. Alarmingly she is starting to come apart under the pressure and her popular creation is starting to come alive and talk to her as part of some bizarre hallucination.

Outside her home one night, Tsukiko is faced with a strange-looking kid on skates armed with a golden bat that seems twisted and mangled as if run over by a car. The kid strikes Tsukiko over the head and then disappears into the night. The story becomes major news and the attacker is labelled ‘Lil Slugger’ by the media (Shonen Bat in the original Japanese) and then we meet several other characters: a popular school kid threatened by another clever kid in his class, a school teacher who moonlights as a prostitute, a sleazy journalist, a corrupt traffic cop whose appetites have ended with him deep in debt to the Yakuza, and a suicidal woman haunted by her fathers sins.

All these characters are connected in some way, and the stress and trauma of their reality leads them to an attack by Lil Slugger when they are right on the verge of falling apart, cornered by their life choices. Often times this wakes them up from what was troubling them, often it leads to some sort of peace or resolution, but what it definitely leads to is fear on the streets of being attacked, an urban legend growing out of control at the same pace as friendly Maromi’s increasing popularity before the launch of her own anime. Two cops, a grizzled veteran and an idealistic youngster (both with their own demons) investigate what is happening, stumbling down a rabbit hole of their own and having to face themselves as paranoia grips the city. 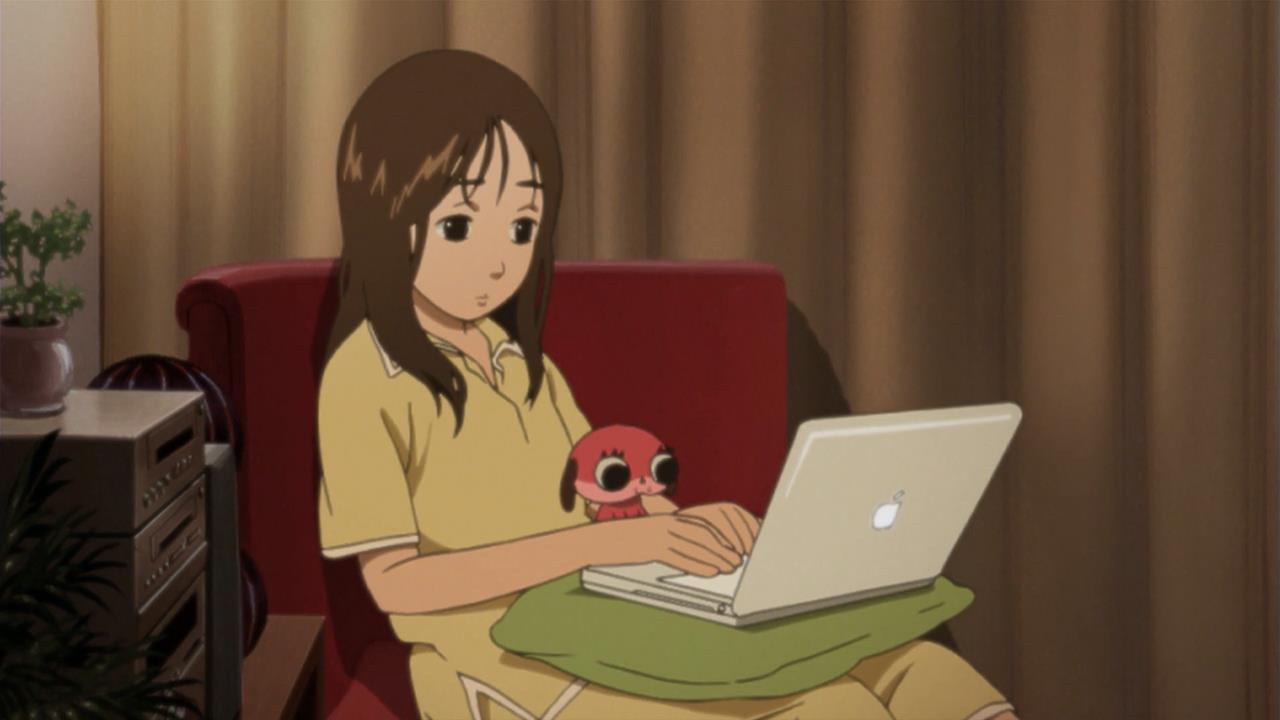 Quite often the best of fiction and art tends to somehow prophesy and predict future events which sometimes come to pass and sometimes not. We don’t have the hoverboards seen in Back to the Future 2 for example, but a lot of what William Gibson wrote about in his Cyberpunk fiction from the ’80s to do with technology has come to pass. Paranoia Agent was first broadcast in 2004 on Japan’s WOWOW network and then made its way in a dubbed English version on to Adult Swim in 2005, and was made available on DVD around the same time. The timing is curious in that we were already technology dependent and largely lost in the internet, but the themes of isolation and getting lost in the dream world of modern life was at a time just before social media and smart phones. If anything the themes present in Paranoia Agent are more relevant now than they were back then. It predicts an epidemic of self-delusion and becoming lost in a techno dream world that we are currently living in.

Watching Paranoia Agent for the first time is much like the experience of watching Twin Peaks or Lost for the first time. The surreal nature of the show, the fluid and yet detailed animation, the imagery and relatable situations and characters suck you in, and it’s very easy to binge the thirteen episodes over a day or two. The soundtrack and opening and end credits set a mood and atmosphere very rare within anime; and its Log Lady like ‘Prophetic Vision’ episode-enders guarantee the mystery build in your mind and hook you in.

The way that the story unfolds is brilliant storytelling. The first six episodes focus on the troubled individuals who start to come apart before their attack. and in each of these episodes there is a minor character who then becomes the focus of the next or later episode. It’s a very well thought out approach which mirrors the viral nature of the epidemic of paranoia that comes with how the attacks affect the populace in the story. After the initial six episodes we then focus on the larger picture and how the world is going mad with the onslaught of this new urban legend. Episode 8 focuses on three suicidal misfits who met online in a strangely delightful instance of black comedy, Episode 9 focuses entirely on a group of gossiping housewives telling even more outlandish tales they have heard of Lil Slugger’s horrific attacks and Episode 10 then concerns the stressed out animators behind Maromi having their own breakdowns as both of these fictional characters send the city into a frenzy.

The detectives on the case by this point are both lost and on the verge of their own oblivion. The young cop has become a doom predicting vigilante like character spurred on by the delusions of a Lil Slugger suspect, and the grizzled elder cop has gotten lost in a story book like vision of his world; a simpler time as he hides from the fact he can’t solve the case and his wife is terminally ill. I have heard many definitively make a claim on the nature of Lil Slugger within the story, but there are many indications that this is not a definite case of real or imaginary, and part of the fun of the show is bringing your own interpretations to what it all means as we end largely as we begun, a society not heeding the warnings and heading towards another great fall. Yet Paranoia Agent still comes to a satisfying and moving conclusion all on its own, even if its themes echo unendingly in real life forever unresolved. 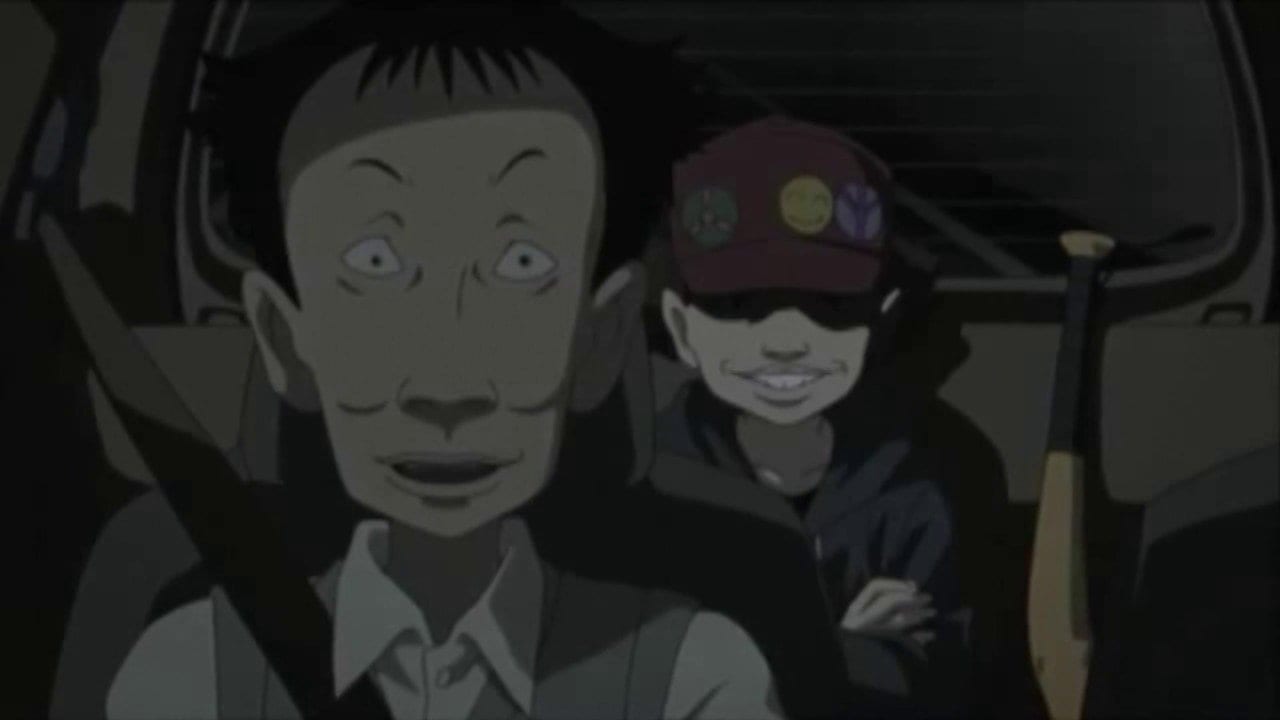 Unfortunately anime has become a story telling medium that it is increasingly easy to write off. For every Paranoia Agent there are around 800 or so sleazy fan service drenched shows aimed at fourteen year olds. This is without doubt one of the greatest examples of what the medium is capable of when given the freedom to experiment and aim for something higher. Losing director Satoshi Kon at too young an age of 46 to cancer is one of the great undersung tragedies of our times. His work often dealt with the nature of duality, living a lie and redemption within films such as Perfect Blue, Tokyo Godfathers and Paprika, and in each one of these you could tell this was the work of a singular visionary.

Paranoia Agent was an experiment that he used to forge ideas from other projects which he had not gotten to use, and the experiment paid off as you could make a good argument that Paranoia Agent is his best work. It feels like the one where all of his obsessions were fully explored and not compromised by working within a restrictive running time. However, his last feature, which he was working on at the time of his death in 2010, entitled Dreaming Machine, remains frustratingly unfinished. Had he lived he may well have become on a par with Hayao Miyazaki in terms of how his work was embraced by the mainstream.

If you get the chance to seek it out, I highly recommend Paranoia Agent as something to replace the need for that surreal mystery fix you might be missing with the absence of your favourite show between seasons. We live in a world where the internet was gripped just three years ago by an epidemic of evil clown sightings that actually led to some real world deaths, and currently a fictional character named “Momo” terrifies people worldwide with unwanted gifs popping up everywhere. Paranoia Agent is about exactly this kind of thing; the spread of fear and madness that we need the occasional wake up call from, looking up from our devices and looking at the real world and refusing to give into the fear that reality might bring.