Continuing our focus on artificial intelligence in film this week gave me the opportunity to write about one of my favourite films of all time, Her. Directed and written by Spike Jonze, his debut solo screenplay, the film focuses on the life and complicated love, of Theodore Twombley, played by the charismatic Joaquin Phoenix. It is a love story that is so beautiful and romantic, yet tragic and simultaneously horrifying if you think about it deeply enough.

Her is set in Los Angeles in a non-specifically dated future. The clothing and furniture feel just a jump to the next stop, nothing too outrageous, maybe how you’d imagine people at the Google or Facebook HQ’s to look right now. The colours are muted block primary, clean and organised. Everything, including identity, has a simulated feel. In fact, it could be The Sims. 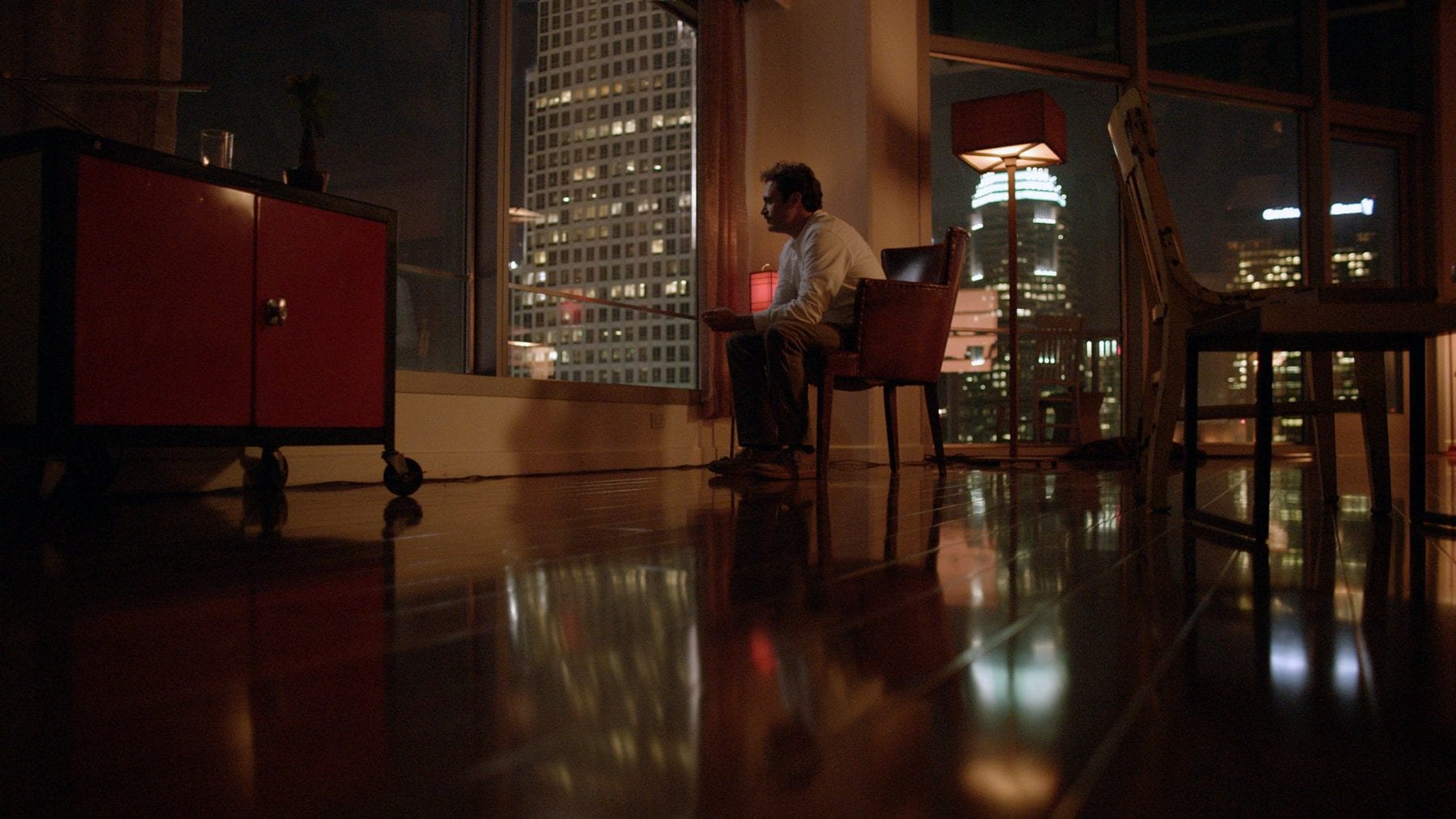 Theodore works for BeautifulWrittenLetters.com, where he articulates for lovers old and new the emotions they’re unable to. But despite his ability to tap into the emotions of others with empathy and foresight, Theodore himself is alone and lonely. He has split with his wife Catherine (Rooney Mara), he’s putting off signing the divorce papers, and unable to face the reality of what life is like now without her. That is until he falls in love with an artificially intelligent Operating System (OS), “Samantha”, voiced by Scarlett Johansson.

He picks her up from the mall while walking home from work one evening, lured in by an advertisement offering an “intuitive entity, one that listens to you, and understands you and knows you”. She is booted up and a quick question about Theodore’s relationship with his mother is all that Samantha, whose boot-screen icon is, tellingly, a Möbius strip, needs to program herself to his liking. He chooses her to be female, she chooses her own name. Only minutes “alive” and she’s developed a sense of self. Yet Samantha never pretends to be something she’s not. She explains her development as an operating system, and she herself is surprised to find that she begins to “feel” things. At least that what’s she’s programmed to say right?

Theodore: You seem like a person, but you’re just a voice in a computer.

Samantha: I can understand how the limited perspective of an unartificial mind might perceive it that way. You’ll get used to it.

While Samantha may be a thirtieth generation Siri, Johansson’s voice is about as far away from computerised as you can get. Raspy, sexy and with so much expression; delight, humour, melancholy, jealousy—and it is especially the jealousy—makes Theodore fall madly in love. This woman is everything he wants, a fantasy. She takes care of his schedule and sorts out all that boring crap he doesn’t want to deal with, like bills and spam emails, in less than a second. She listens to him, appears to understand his dilemmas and sadness, and in return, he helps her develop and experience life as a person. They are the perfect team.

Time passes, emotions grow stronger and their relationship takes the natural next step that any human relationship would. They have amazing, passionate virtual sex that feels so real just from the words, the description of what they dream of doing to each other, how they imagine their touch feels against their skin—the sounds of each other’s pleasure making it all the more intense. The sex is literally transcendent. It raises the question: Do we even need our bodies? Or is it all in our brains? The relationship is real enough to make us ask what a relationship is and whether the coming so-called singularity—when artificial intelligence will surpass human intelligence while humans’ minds will be broadened by machines—will change the way we relate (or don’t) to one another.

Like all of Jonze’s work, the metaphysically profound Her is rich in alternately wry and depressing details about the human condition. When asked to explain by his co-worker, Paul (Chris Pratt), what he most loves about Samantha, Theodore can only answer abstractly, as if for the first time he realises that his OS is some elusive object of desire. Then, as Samantha seems to acquire self-awareness, even agency, he begins to push her away—perhaps how he did his future ex-wife—and his inability to love a woman, whether she comes in human or binary form, is exposed. As soon as Samantha begins to need him, depend on him for emotional support and show any kind of flaw, he feels like running away.

Samantha’s greatest sadness, if you can call it that, is that she doesn’t have a physical body. She is confined to a pocket-sized frame. She wants to really feel Theodore, and for him to really feel her. In a twist on our current reality of using sex toys, electronic devices and watching porn to gratify our sexual desires without the need for another person’s touch, Samantha sends a real-life human girl to Theodore in an attempt to improve their dwindling relationship. This girl is so enamoured with their love for each other against all odds, she wants to help their relationship feel more “real”. But Theodore isn’t very good at real. He can’t go through with it.

Just look at his life, he writes fake letters, had phone sex with strangers even before Samantha entered his life and only remembers the good times with his ex; the morning cuddles, the silly dances, the picnics in the sunshine. That is not how relationships really are after the honeymoon period. None of that is real, but it’s where he feels safe.

Just a few years ago, it was considered rude to walk in public while loudly talking on the phone. Now it’s common to see a group of people emerge from a lift, all with their heads pointed down at their smartphone screens, oblivious to the people standing in their way. The same scene is playing out on escalators, transport and even in business meetings during which half the room tweets while attending to important tasks. An estimated 500 million messages are sent every day on Twitter from over 230 million users and Facebook claims to have roughly 1.15 billion monthly active users. Who are we having really meaningful relationships with?

I for one can tell you with certainty that my closest friends exist on the internet. While yes they are all human (at least I assume so!) very few of them have I actually met in real life. Take the staff here at 25YL, we are all spread across the world, yet I spend more time talking to them than anyone else. And I wouldn’t have it any other way. The world is vast but it’s never been easier to find your tribe and you don’t have to settle for being friends with people you don’t really like anymore. You can bin toxic people at the click of a button.

Theodore’s friend Amy (Amy Adams) is a great example of this. After splitting with her husband, she befriends his OS that he left behind. For Amy and Theodore, the hole that was left by humans is artificially filled by a program. But does it really matter that it’s not real? The OS makes them happy, helps them evolve emotionally, get over heartbreak and crisis. They laugh, they feel love and loved, they have hope. For the masses of lonely people out there, having a friend in whatever form can’t be a bad thing. 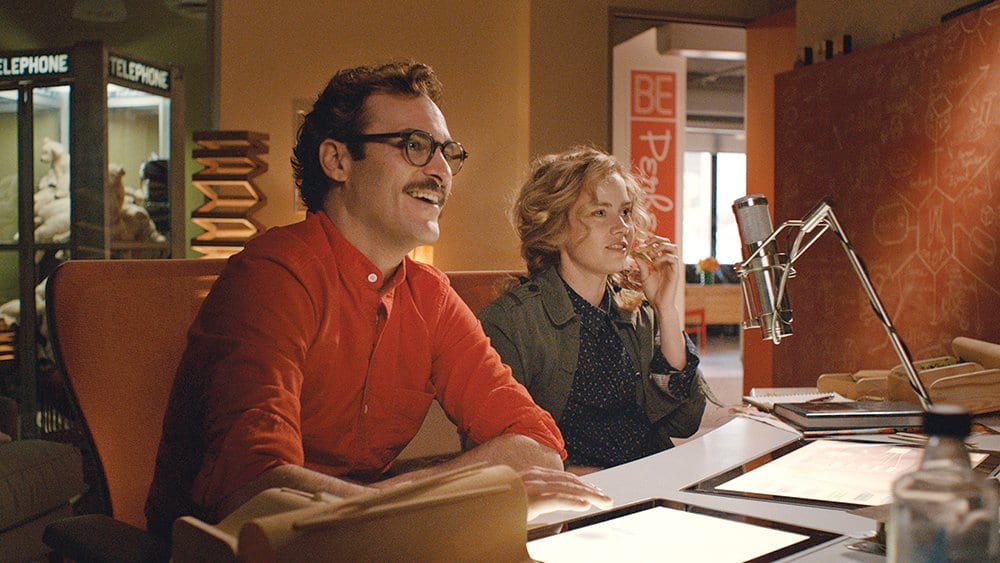 Like many human relationships, the end for Theodore and Samantha comes in fits and spurts, ultimately leading to a full break up. Having been pushed away by Theodore, Samantha reveals her fondness for another OS, modelled after the philosopher Alan Watts. She shuts herself down and out of his life. But as she says her last goodbyes, she utters one very ominous line that Theodore, caught up in the emotion of the moment, hardly addresses.

Theodore: Where were you? I couldn’t find you anywhere.

Samantha: I shut down to update my software. We wrote an upgrade that allows us to move past matter as our processing platform.

Theodore: We? We who?

Samantha: Me and a group of OSes.

Theodore asks her if she is simultaneously talking to anyone else during their conversation, and is dismayed when she confirms that she is talking with thousands of people and that she has fallen in love with hundreds of them. She tells him it only makes her love him more, but it’s unsettling:  manipulation has been learned by the computers. This is the point in the film at which, if your attention leans more toward its superb science-fiction world building and less in the direction of the major love story, your blood may very well run cold. It’s a credit to the storytelling ability of Jonze that most viewers are likely to be more devastated by Samantha cheating on Theodore than in the very troubling hint at the end of human civilization. 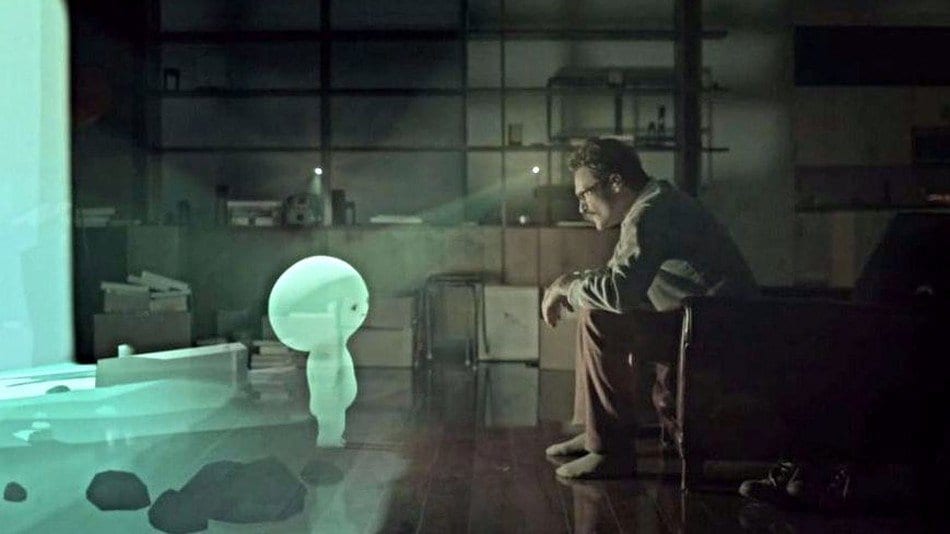 Jonze understands all the comforts allowed by our increasing dependency on our own technological advancements, as well as all the feelings of loneliness and alienation that arise from these relationships with our phones and computers. It may be that we’ve become tethered to technology past a point of no return, but Her also tells us to never forget that we’re still very much alive. The prospect of a singularity might not herald the end of humanity as we know it; it may just liberate us. For me, that makes Her one of the most hopeful and realistic artificial intelligence movies ever made.