“Society is a fragile ecosystem,” says The Narrator (Jordan Peele) at the conclusion of the fifth episode of the new Twilight Zone. “Razzle and dazzle people with the right lies, and eventually they’ll go blind to the madness right in front of their faces.” And thus ends a truly haunting, reality-twisting Twilight Zone episode that does its best to be both a subtle examination of the United States’ brain-think as well as a purposefully on-the-nose visual treatise on the current hellscape of American politics.

The premise of “The Wunderkind”: what if the United States was seduced by rhetoric and ended up electing a child to the highest office in the land? A child president that erupts in anger over a missed golf shot, fumes that his impossible and fundamentally wrong campaign promises are not met, is angered he can’t simply order away the checks and balances that exist to keep him in proportion, and who throws out terms like “treason” and “enemy” when someone dares to criticize him. Obviously, something like this is pure fantasy, right? Please, god, say I’m right! 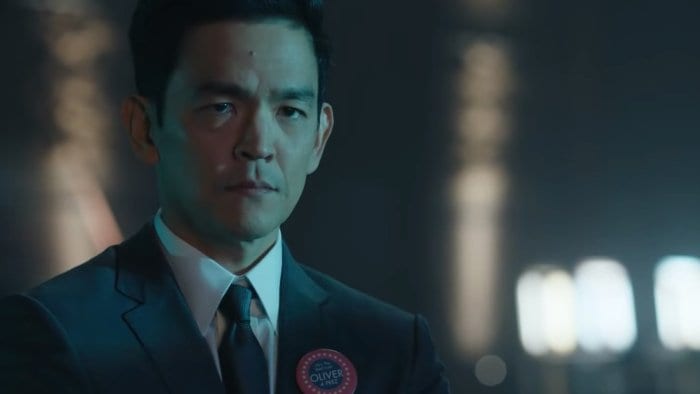 Like any good Twilight Zone episode, old or new, the harshest and most frightening commentaries are the ones that hit close to home. “The Wunderkind” might be Jordan Peele’s newest incarnation’s most damning critique of culture to date. While the third episode, “Replay,” dealt with police brutality and the fraught black experience in America, “The Wunderkind” may be the most wide-ranging examination of American culture as the effects of rhetoric, opportunism, and self-aggrandizement lead to the erosion of culture on a global scale.

In “The Wunderkind,” we meet Raff Hanks (John Cho), the campaign manager for sitting President James Stevens (John Larroquette), who is described as the least likable president in history. Thanks to polling data and strict analytics, it looks like Stevens is going to be re-elected for a second term. However, on election night, Stevens loses heavily, including his own state, and becomes a “one-term joke.”

Cut to two years later: Hanks, once thought of as a wunderkind, is drinking himself into a stupor when he comes across a viral video of eleven-year-old Oliver Foley (Jacob Tremblay), who advises he will run for president based on a platform of being nice to people and free video games. A fellow bar patron jokes that Hanks should run Foley’s campaign. Ever the opportunist and looking to salvage his reputation—or, at least, get his name back in the headlines—Hanks takes it seriously and convinces Foley’s parents that running for president is actually a good idea.

What starts out as a gag, just to get his face on a few television programs and to get the Foleys some promotion to make a quick buck, turns into a grassroots campaign that sweeps the nation. Not only is Foley loved by the American people for his “tell it like it is” approach, but his campaign earns serious points for (as interviewed potential voters say) “being outside the crooked political system.”

Over the next few years, Foley’s viral campaigns and manipulation of emotions lead him to win primaries and, eventually, the presidency. Hanks stays on as an advisor for Oliver and slowly realizes the horrid mistake he’s made by actually pushing for a preteen to become President of the United States. Beset by temper tantrums and unreasonable demands, the White House begins to shape itself as a childish paradise of ice cream sundaes and basketball games with generals. 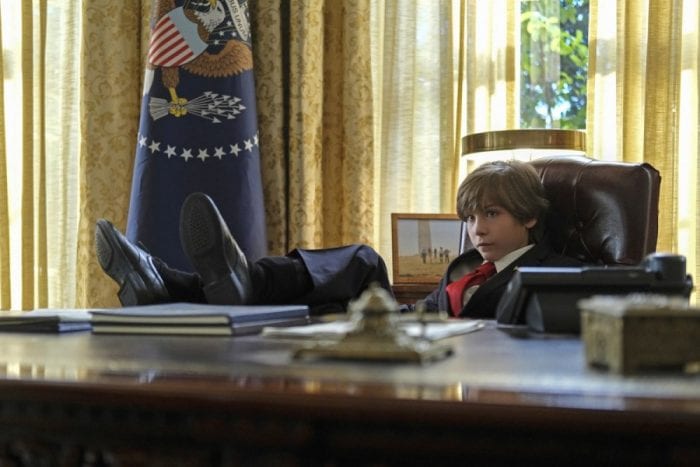 Even worse, Foley has learned Hanks’s manipulation of both emotions and data. As he grows ever smarter and more ruthless, Foley has the ability to convince his military aides and political advisors that criticism against him is treason. Needless to say, Hanks becomes the first victim of the monster he created.

How you react to this episode will likely fall on what party you support. I can see supporters of the United States’ current President finding the episode a direct attack on him. And, well, it is—and unashamedly so. But it goes beyond commenting directly on the sitting President’s well-documented temper tantrums, lack of understanding of basic political concepts, and his manipulation of base emotions and fear to stoke support.

The episode also goes into detail on how much of a game politics has become. No longer a synergy of ideas and valid philosophical concepts, modern-day politics has become buzzwords, viral videos, campaign slogans, and one-upmanship that moves the critical needle on a day-by-day basis. How we conduct business now is thus not a forward-thinking idea based on data and future projections but an “of-the-moment” emotional campaign where lines are drawn in the sand and teams are formed, with no compromise, no foresight, and no ability to challenge the status quo. You are either with your team or you are a traitor.

And that’s why “The Wunderkind” is the most effective episode of the current Twilight Zone‘s short five-episode history. The lines between reality and fiction are blurred. Yes, the episode takes creative license to emphasize its points. Whereas President Trump has currently been handcuffed by not only his own actions but by the appropriate checks and balances, his rhetoric is still dividing and, frankly, destroying the nation from the inside out. And where he has been given an inch to implement his philosophy, he has taken a mile leading to (among other things) disastrous tax policy, eroding environmental protections, and a Supreme Court just waiting to eradicate women’s rights.

“The Wunderkind” looks at this in a more direct way, showing a president who has basically changed the laws and gotten his way completely, leading to dystopia. The Twilight Zone uses a “from the outside in” fictional destruction of American thought and progress to examine its true corrosion from within. While I don’t think the world can reach the horrific lows of what the episode proposes literally, that “with us or against us” mentality is occurring on a smaller and destructive scale that may take generations to run its course. 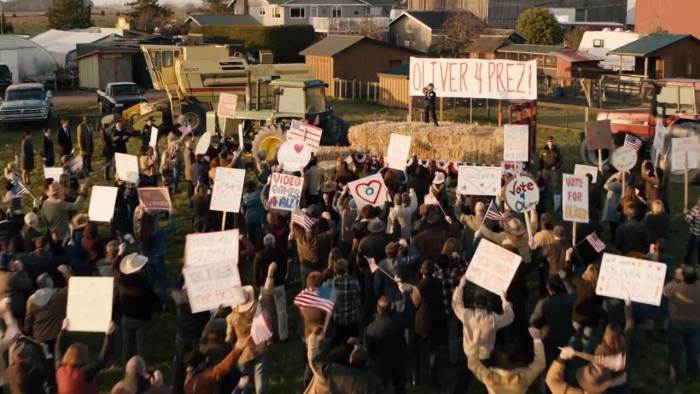 On the technical side, there is no whiz-bang atmosphere to promote here. This Twilight Zone is an in-your-face allegory. Director Richard Shepard (Girls, The Matador) lets the script, written by noted comedy writer Andrew Guest (Community, Brooklyn Nine-Nine), provide all the fireworks. Past episodes have had visual cues and fancy atmospheric cinematography play a character in the story. In this one, it is simply the dialogue spoken and the no-frills approach that provide all the horror. Hopefully, “The Wunderkind” is just a warning shot across the bow of where we are headed and not an actual documentary foretelling our country’s future.